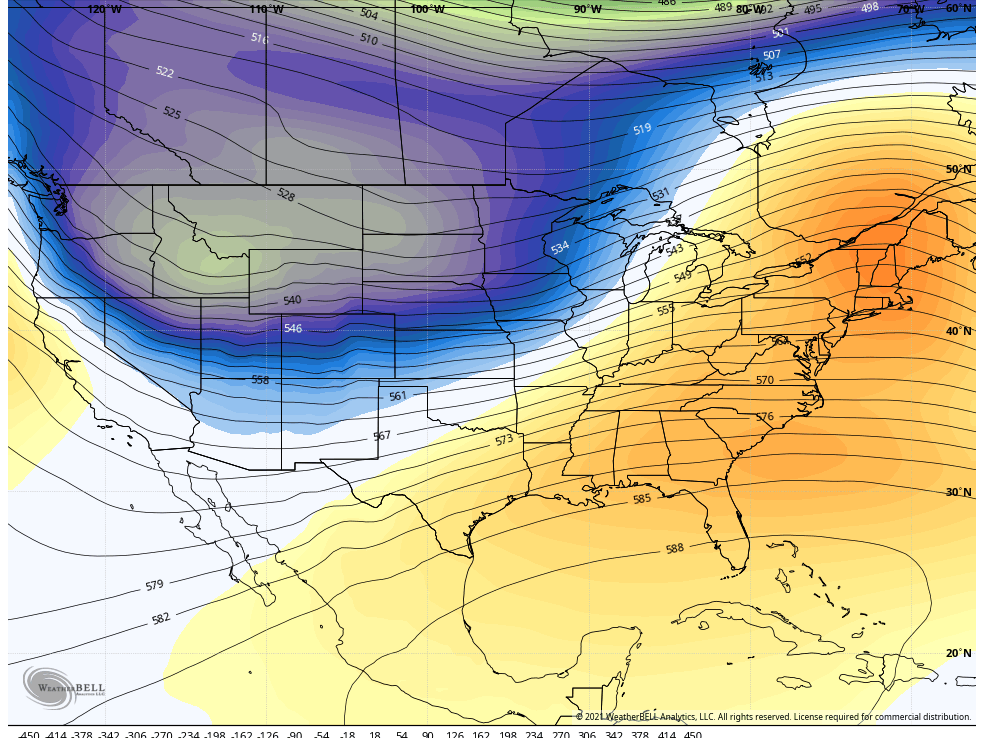 The next storm system is just getting underway in the Northwest. Significant snow will fall from Thursday to Friday night. Decent energy will pass through central Idaho, northern Wyoming, and the central and northern Wasatch of Utah. Windy periods are going to make chasing powder very difficult gambling on openings and snow quality.

Winter is firing! Gear up for the best days of the season at Powder7 Ski Shop. They have new skis, boots, clothing, and other gear from all your favorite brands—plus North America's largest selection of used demo skis for sale. Score new powder skis, find your touring setup, or upgrade your skiwear without leaving your couch at Powder7.com

My forecast yesterday called for meager amounts for most of Colorado with the exception of Eldora who I forecasted 2-5 inches for the 6 AM report (They reported 6 on Thursday morning). Elsewhere, I have never seen so many 1-2 inch snow totals (I-70 corridor). Turns should be fun this morning and some snow showers might continue until mid-morning.

Looking at telemetry in the PNW on Thursday morning the highest snow totals on Thursday will come from the northern Cascades of Washington (Mt. Baker) followed by areas along or near I-90. SW flow has already brought 5 inches to Baker early Thursday and 2-4 elsewhere. A very strong and moist jet will push through the Cascades Thursday to late Friday night bringing 3 feet of snowfall to many areas. Winds shift and increase to the W, NW Thursday mid-morning increasing snowfall for all-mountain ranges in Washington favoring the west-facing slopes. 2-3 feet can be expected for a wide range of western mountain ranges of the Northwest extending from Washington to Oregon. Favored spots will be the I-90 Corridor (Alpental, Snoqualmie), Stevens Pass, and to some extent Crystal who can score decent totals with NW flow. The Oregon Cascades will see similar amounts from Timberline to Mount Bachelor especially late Thursday and Friday. Very strong winds from the NW will produce gusts in the 60's at 7,000 feet creating lift impacts perhaps as early as Thursday afternoon and with more certainty Friday morning. This presents the wildcard of "chase or not chase" "what will open" or "this could be the best opening of the season depending on your run and wind impacts".  I have lots of questions about chasing this storm currently. Winds might decrease a tad by midday Friday so let's hope that happens. Saturday might be the best day to grab terrain openings (Ugg the weekend again). Avalanche Mitigation will be extensive from this storm.

Elsewhere on the chase, the eastern Cascades of Washington should score a foot or more of powder, with the northern panhandle of Idaho near Selkirk Powder (Snowcat tours) near Sandpoint in the 5-10 inch range Friday morning. The east-central portions of Idaho near Lookout Pass (Deep) will be measured in feet by Friday afternoon. Further west towards McCall will see less snow (5-10).

In the Rockies, this storm appears to take another track to the north bringing decent storm skiing on Friday for the Tetons and overnight snow for Saturday morning. It's a bit split with 6-9 inches Friday (Storm ski) and another 4-9 Friday night (Might not be the 11-15 you were hoping for overnight). Targhee might see the highest amounts with a favored wind direction. Windy periods might create funk in the snow quality at times. While the totals are going to be good it's split on AM and PM snowfall.

Below: Significant snowfall for the central panhandle of Idaho with moderate amounts extending over much of Montana late this week. The Tetons are also going to score some decent amounts split between daytime snow Friday and overnight snow into Saturday. 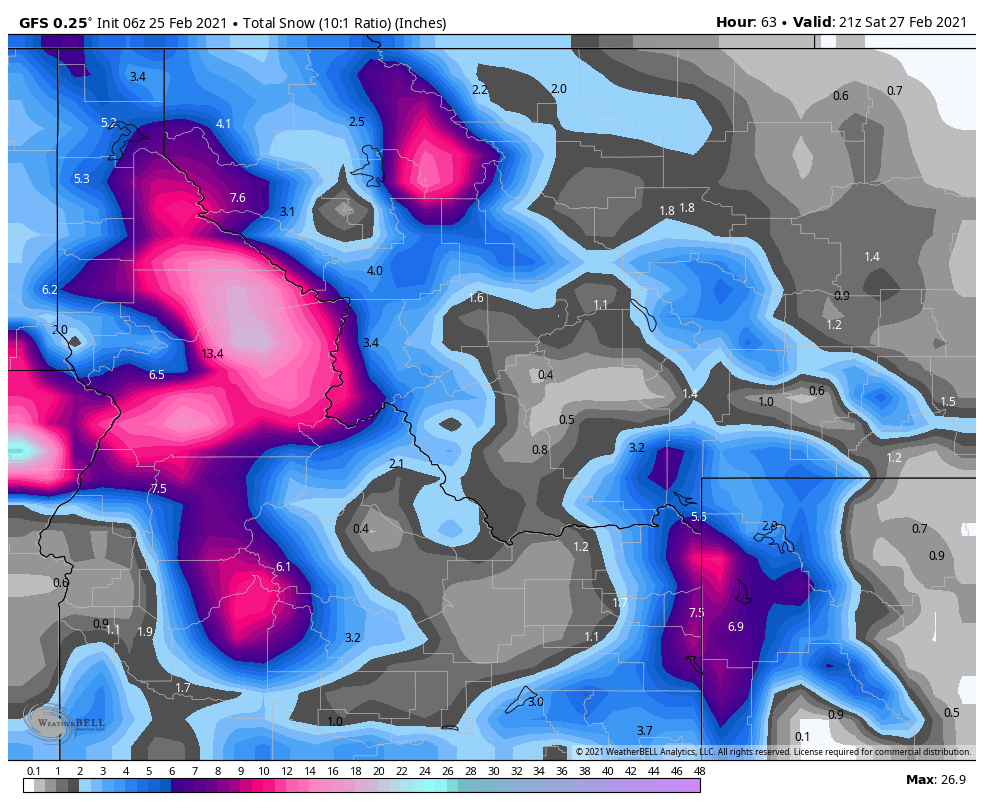 Further south towards the Wasatch Range in Utah, the models are trending higher amounts for the central or northern Wasatch. This storm has the potential for 6-15 inches by Saturday morning (Some model uncertainty). Snow begins on Friday but increases towards the afternoon. By Saturday you could see storm totals of 7-11 inches for the Cottonwoods, 5-10 inches for Park City (Canyons side is favored), and 7-13 inch totals for Powder Mountain and perhaps Beaver near Logan. The spread of amounts further north is purely from a trend that the northern Wasatch could be slightly favored on this storm. However, NW flow can also spell some surprises for the Cottonwoods so my upside of 11 inches could end up being higher. Storm ski Friday afternoon and enjoy some new powder on Saturday. The European model is less optimistic on snow totals (Still some uncertainties with this storm).

Colorado is in the realm of leftovers for Saturday/Sunday. Snow will be falling late Friday into late Saturday with some additional snow for Sunday morning. The amounts don't look impressive. It's likely going to be an event with 4-7 inches along the core of I-70 and a glimmer of hope for higher amounts depicted on the models for Aspen. Vail can also score some upside surprises with NW flow. This will be updated in a later post.

The models are not in agreement with next week. The European ensembles bring another storm system into the Rockies and Northwest by Tuesday and Wednesday. The operational GFS wants to skirt a quick-moving storm from southern California through Colorado by Tuesday night. Nothing of significance is currently likely early or midweek, but there is a glimmer of hope for a decent trough to enter the Pacific Northwest and migrate over the Rockies perhaps by Friday or Saturday (Next week).

Below: High pressure early next week for the west Below: The European Model wants to bring a trough in from the desert southwest that could skirt up through Colorado by midweek. The PNW might stay dry. 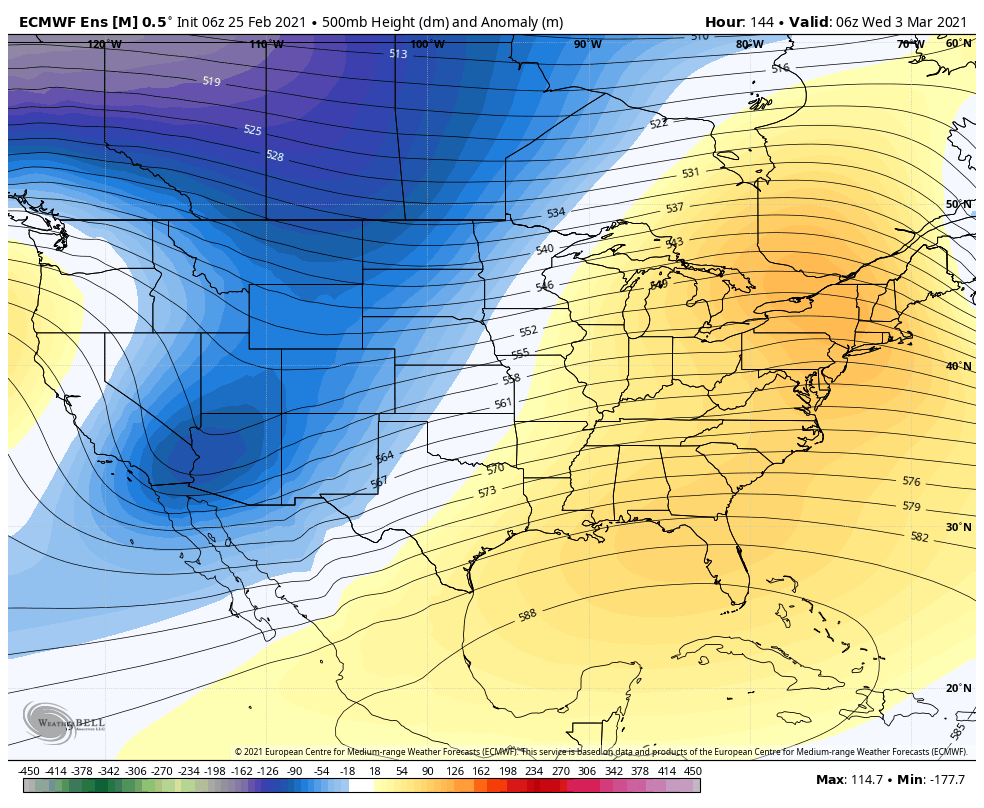 Below: Next weekend could begin to see some activity as a trough might enter the PNW and transverse over the Rockies. 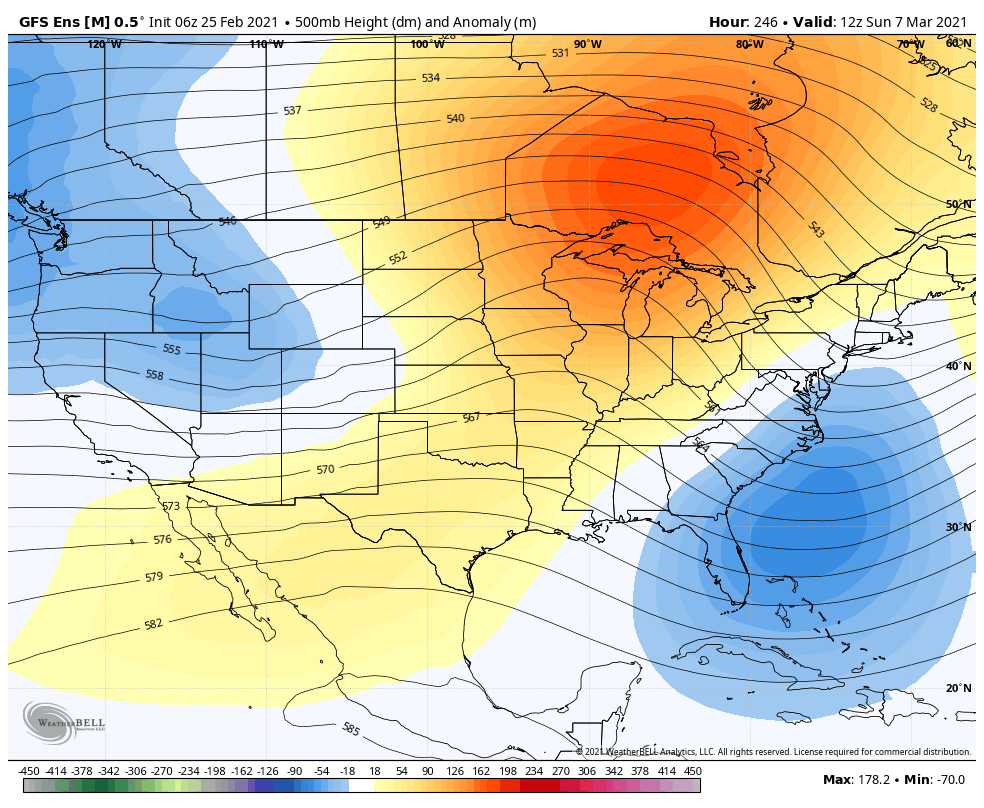 Enjoy the Powder everyone