Strong wind and some snow 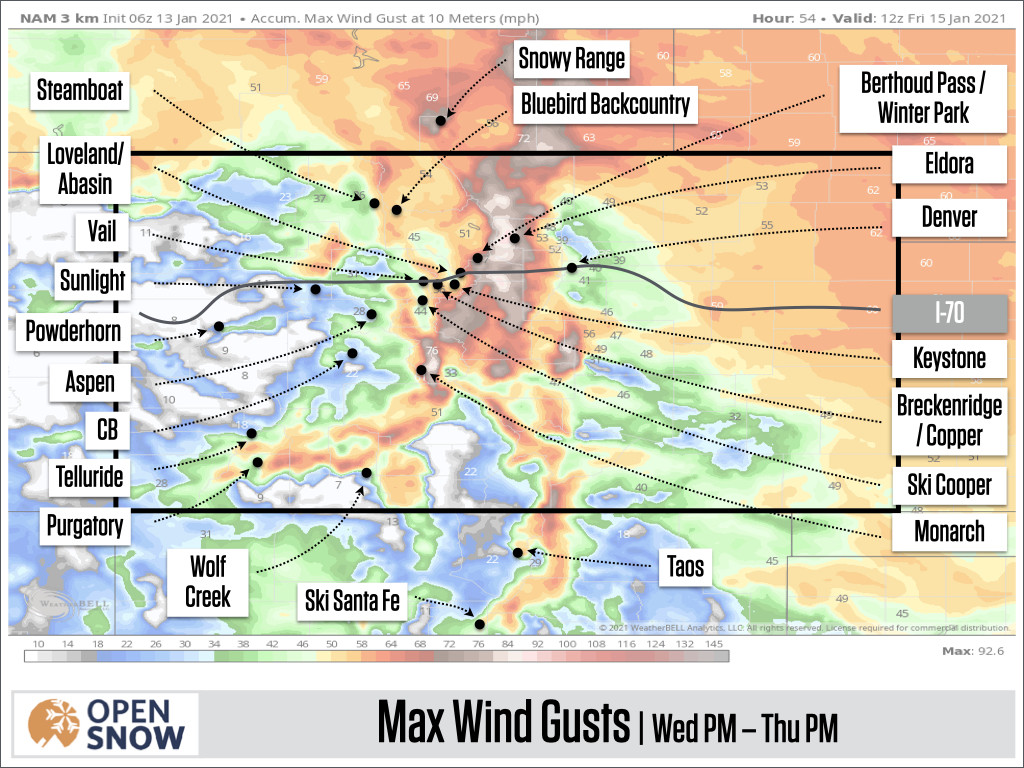 A storm from Wednesday evening through Thursday will bring wind gusts of 50+mph to many mountains and just a few inches of snow to the northern mountains. Two storms will follow, with a few more inches of snow on Saturday and Saturday night and a better chance of somewhat deeper accumulations early next week.

Tuesday was dry and partly-to-mostly sunny with high temperatures between the mid-20s and mid-30s.

Wednesday's weather will be dry for most of the day with a few showers possible over the northern mountains late in the afternoon. The main story will be increasing wind speeds by the afternoon and evening.

Wednesday night through Thursday night will bring a little snow to the northern mountains and strong winds to many mountains. I wish this were reversed with a lot of snow and a little wind, but unfortunately, the main story will be the wind.

We should see the fastest gusts on Wednesday night, perhaps a bit of a lull early Thursday morning, and then strong gusts returning throughout most of Thursday. The northern mountains near the divide will see the fastest speeds with gusts well over 50mph and other higher peaks will also see fast speeds. 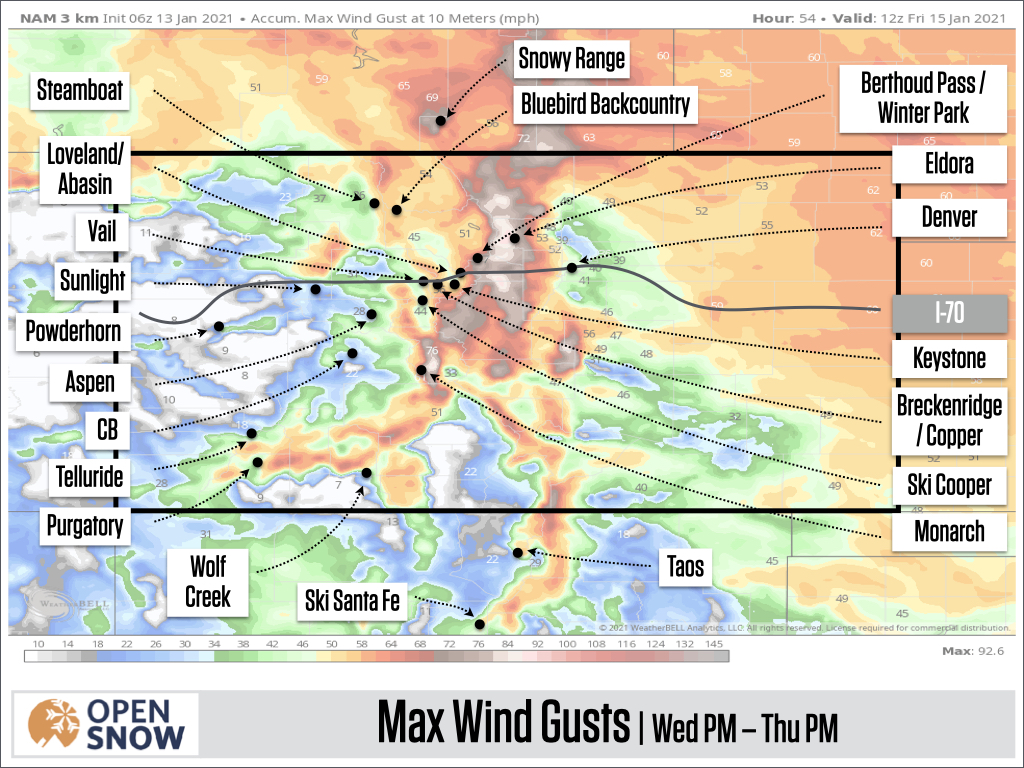 These wind gusts could be strong enough to slow or close some lifts and gondolas on Thursday.

Another aspect of this storm will be some snowflakes, with a few bursts of snow likely from Wednesday evening through Thursday morning. The northern mountains are favored by the track of the storm with a coating to a couple of inches possible, and some flakes might make it down to the Aspen area in the central mountains. I don't want to minimize the chance of seeing flakes and some accumulation, but I do think that the main story will be the wind and its impact on operations on Thursday as well as potentially reducing visibility on the roads and/or closing some roads on Wednesday night into Thursday due to blowing snow and low or no visibility.

You can follow the details of this windy storm with our new wind gust map layer available to All-Access subscribers on our website and mobile app. The wind gust map shows a high-resolution forecast updated every hour and extending 18 hours into the future.

Following dry weather on Friday, there will be two chances for snow during the following few days.

The first chance for snow will be from late Friday night through Saturday night when the northern mountains again will be favored for a few inches of snow as a storm clips northern Colorado. Most models show just light amounts of a few inches and maybe soft turns on Saturday and Sunday morning. Other models show potentially higher snow totals up to 6 inches, favoring the northern mountains. As usual, I am keeping expectations low and I'll adjust those expectations upward if I see evidence that it is wise to do so.

The second chance for snow will be from late Sunday night through early Tuesday. This storm has a higher chance of bringing snow to most mountains as it initially targets the northern mountains but then dives south and slows down. I am keeping my eye on Monday and maybe even Tuesday for the potential to see soft turns with low-to-moderate snow accumulations of maybe up to 6 inches or so. 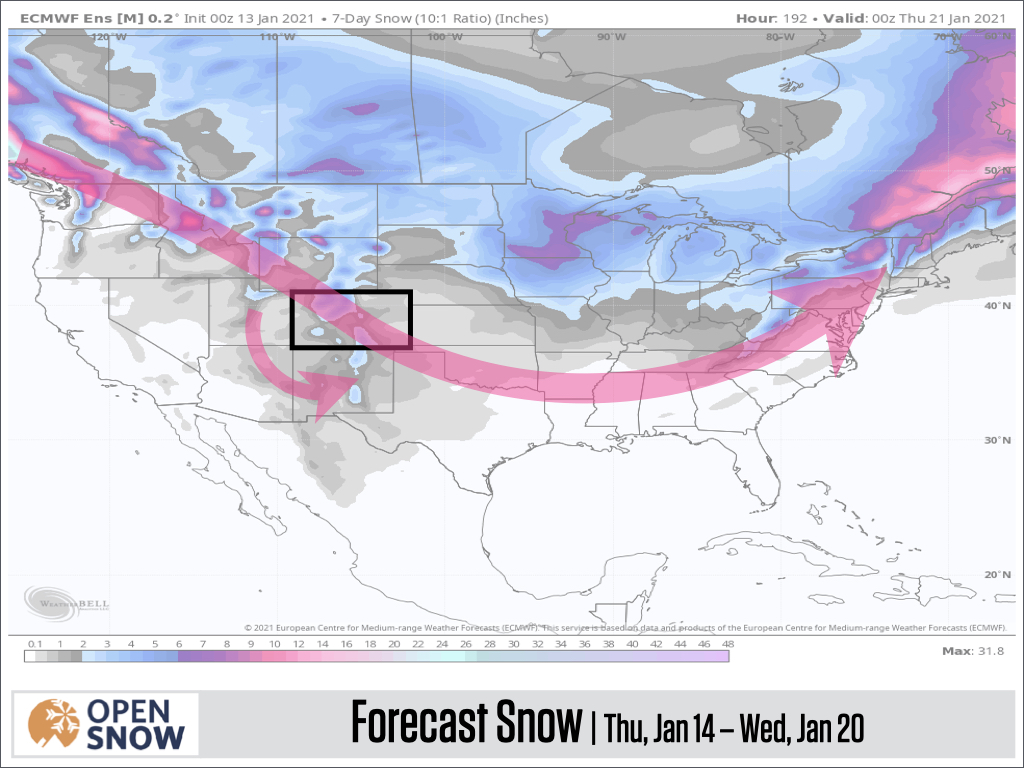 The storm track from January 14-20 will generally be from the northwest which is why the next few storms will favor the northern mountains. The exception will be the system around January 18-19 which could dive south (I show this with the little curved track near the four corners to the southwest of Colorado).

We will see a change in the general storm track as we head into the period after January 20th. Instead of storms generally tracking from the northwest, storms instead could take a more west-ish to east-ish track.

I added "ish" to those words because there is no exact track in the sky that storms follow, and boiling everything down to a simple west-to-east direction is not exactly correct, but the trend for storms to potentially bring more Pacific moisture from the west to Colorado and other states is something to pay attention to.

I still have low confidence in the details of the forecast and will stick with my general thought from yesterday which is to maybe see the best chances for snow around the 21st and again around the 25th. The longer-range models were right on to signal this change in the overall pattern for the end of January, now we just have to hope that luck is on our side and that one system, or a combination of systems, can deliver big snow.

After moving to Crested Butte in the second driest winter to date (2017-2018), I just really wanted to shred some pow and all season I kept thinking it would turn around. Working in a restaurant as a cook, I had nothing else to do but ride all day. The night before my 100th day of riding, a storm came out of nowhere and dumped 8” of snow. The next morning, I and my girlfriend shared our first kiss on the high lift, rode headwall down to NFL, then rode one of the best lines of my life. You gotta love it when all the stars align.
-John C. 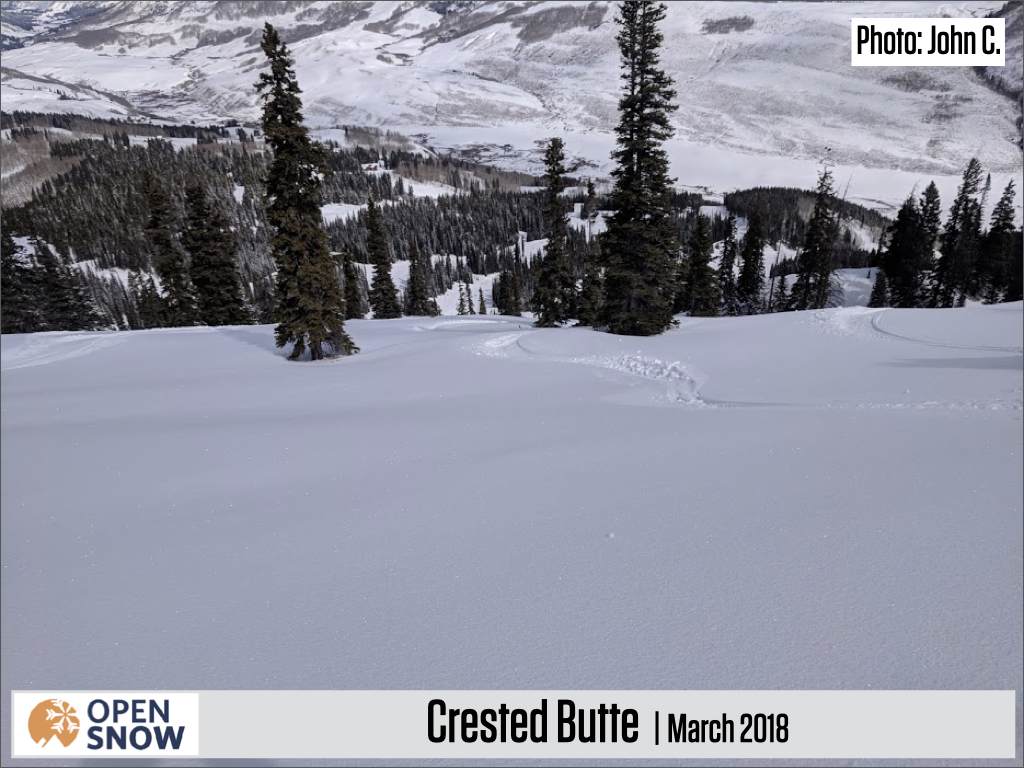