A little bit of snow this morning, potential for significant snow next week 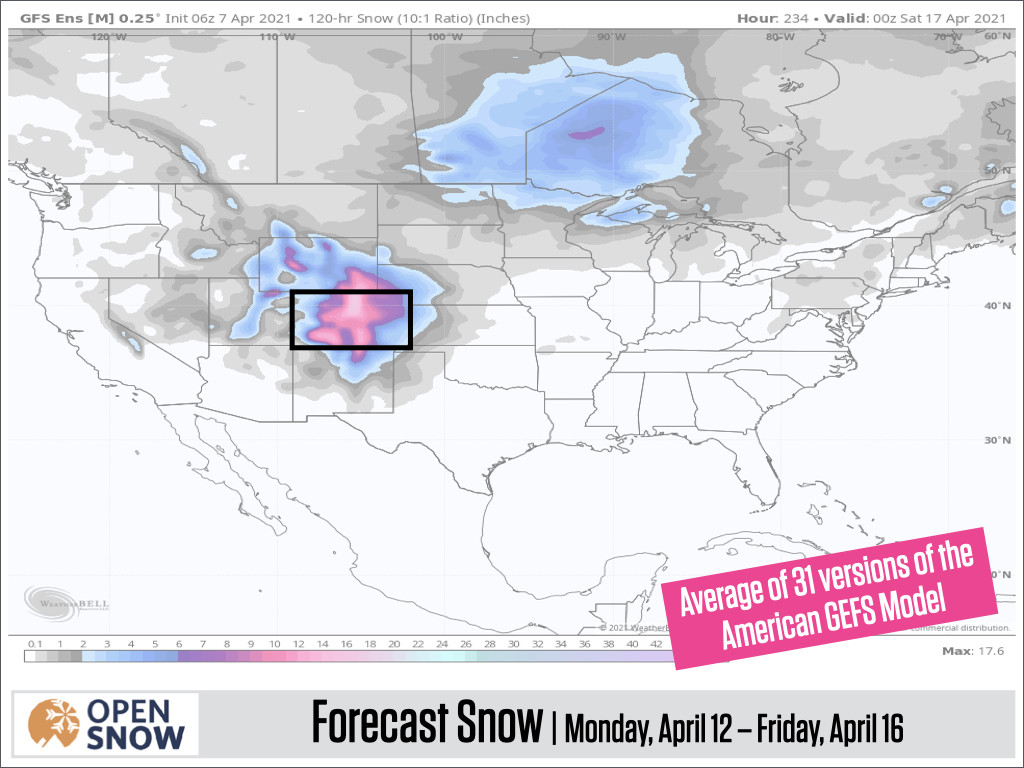 On Wednesday morning, we have 1-3 inches of new snow across the northern and some central mountains. It's not a big powder day, but it's something. From Thursday through Sunday, expect dry weather with high temperatures in the 30s and 40s. Looking at next week, we could see multiple days of snowfall with double-digit totals for some areas.

As a recap, on Tuesday, we saw cooler temperatures in the 30s and just a few light snow showers over the northern and central mountains. The exception to this was at Steamboat where a band of intense snow tracked over the mountain for a few hours during the middle of the day and dropped a quick 3 inches of accumulation.

Then on Tuesday night, the main storm headed to the east of Colorado, and wrap-around moisture and west and northwest flow created more snow showers for the northern and some central mountains.

Now on Wednesday morning, snow reports are around 1 inch for most northern and central mountains, though there are a few higher amounts along the divide with 2 inches at Arapahoe Basin and 3 inches at Loveland. 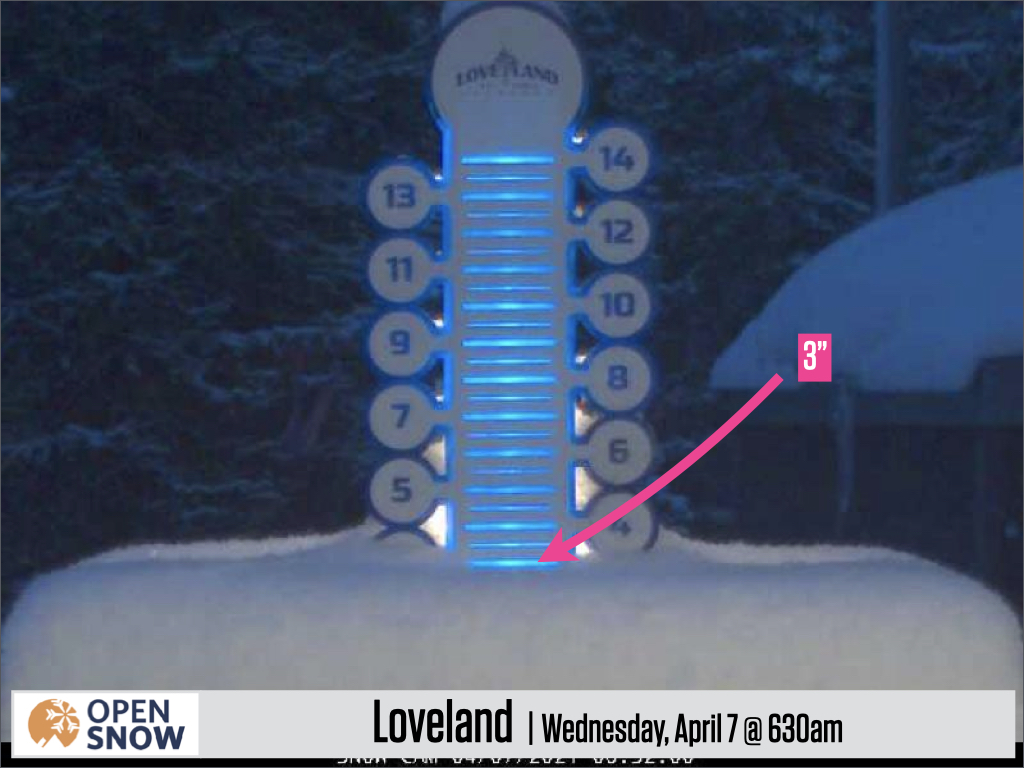 Snow showers should continue across the northern mountains through Wednesday mid-morning with perhaps another coating to an inch of accumulation. Temperatures on Wednesday will be in the teens and 20s during the morning and could warm into the upper 20s to 30s by the afternoon.

Thursday, Friday, Saturday, and Sunday should be dry days.

Thursday and Saturday will be the warmer days with highs in the 30s and 40s.

Friday and Sunday will be cooler days with highs in the 30s and perhaps just the 20s for a few northern mountains. The reason for the cooler temperatures Friday and Sunday will be two storms that will sideswipe Colorado as they track just north of our state. The far northeastern mountains (for example, around Cameron Pass) have the best chance of seeing a few showers during these days.

For days we have been talking about the chance for a multi-day snowstorm next week, and the latest models are mostly on board with this scenario.

Below are the three major long-term ensemble models. The term "ensemble" means that each model is run multiple times with slightly different data and equations, and this creates a group of forecasts that show a range of possible outcomes.

The good news (for those of us that like snow) is that the average of each model's ensemble shows the likelihood for significant snow here in Colorado next week.

The American GEFS shows the most snow. 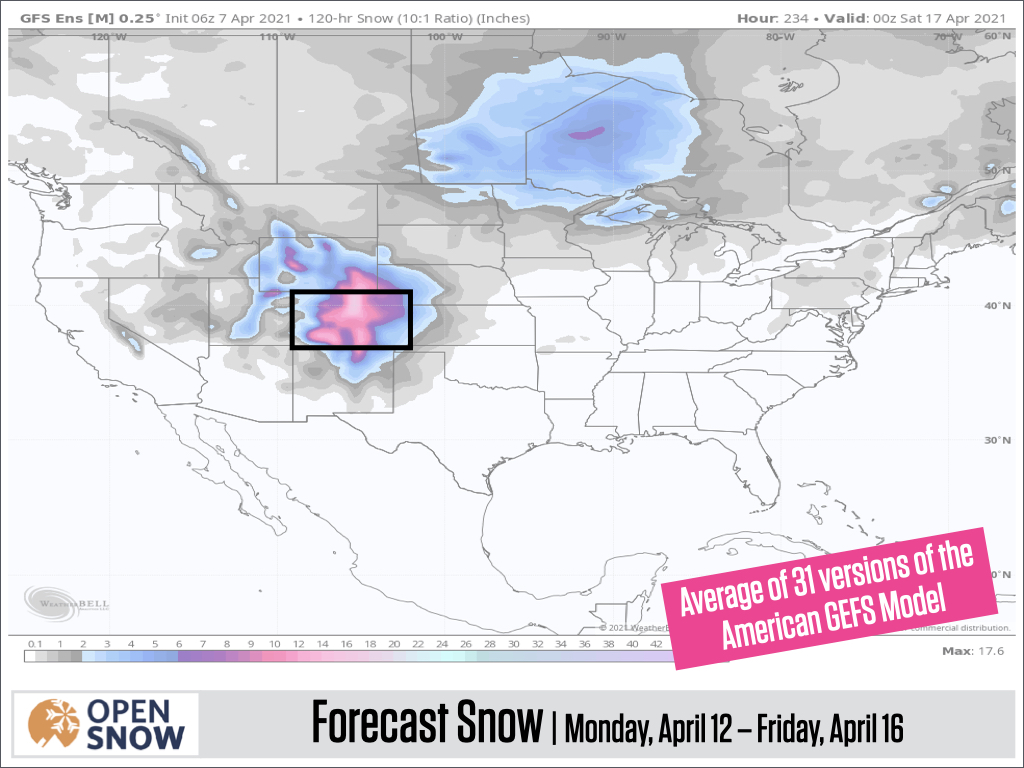 The European EPS is in line with its forecast from yesterday and also shows moderate to significant snowfall. 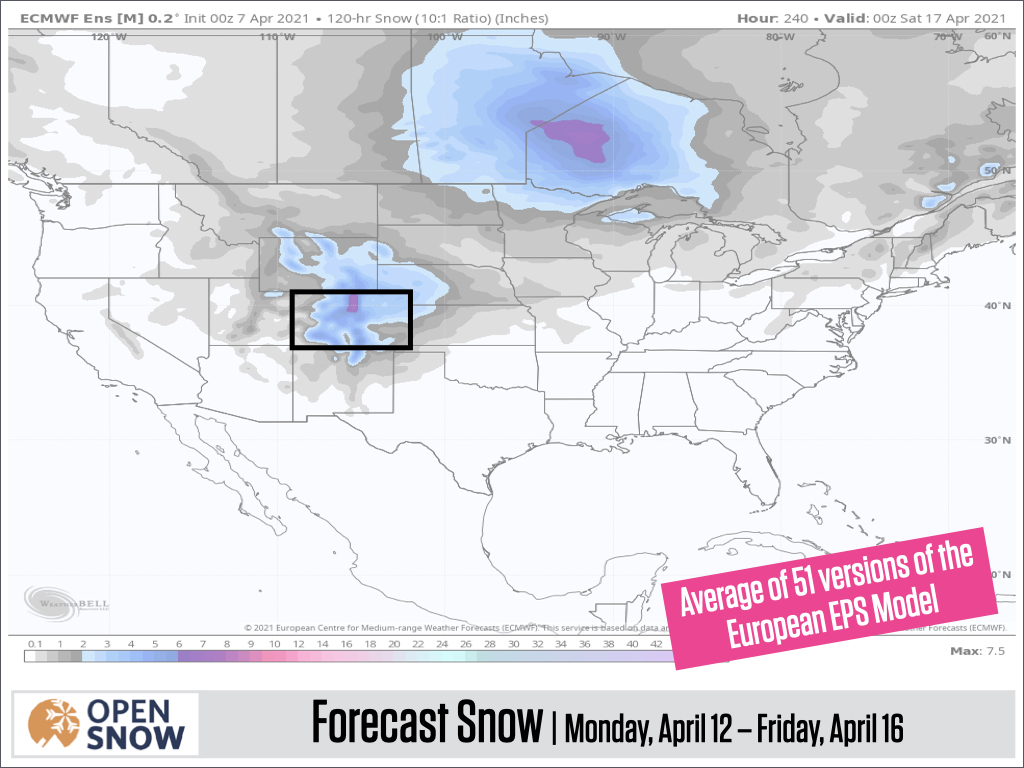 And the Canadian GEFS is on the lower end but still puts the snow bullseye over Colorado. 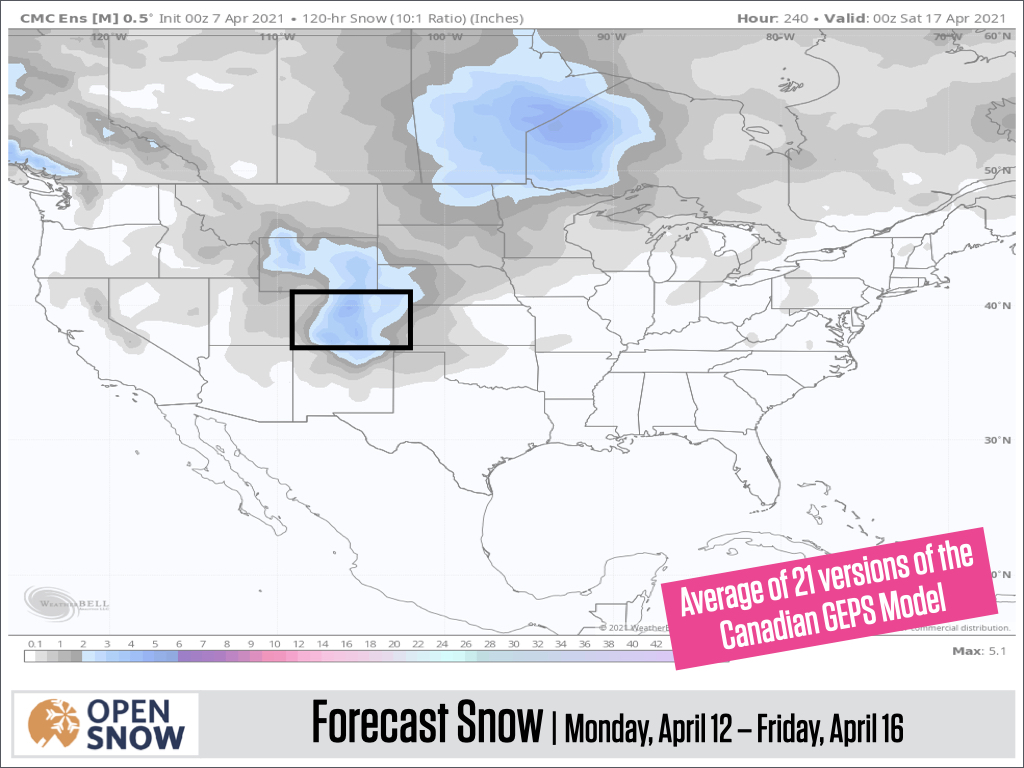 The snow forecast maps above might not look impressive with amounts of just 5-10+ inches. But those numbers are impressive because they are produced by low-resolution models that do a poor job of modeling the intricacies of our mountains, and because they are the average of many versions which present a range of outcomes. For the longer-range ensemble models, we are just looking for a snowy signal and not really concerned with more exact snow amounts.

Speaking of more exact snow amounts, since next week is now within the 10-day forecast period of some of the medium-resolution models, our automated system that averages together factors from multiple models (temperature, snow level, precipitation, snow-to-liquid ratio, etc) is starting to output snow forecast data for next week, and the numbers are getting into the double-digits for some northeastern mountains. You can find the map below by going to Explore > Deepest Reports & Forecasts and filtering for the United States and Colorado for the 10-day Forecast. Of course, 10-day snow forecast numbers will change, but this at least gives us a clue that a significant storm could be on the way. 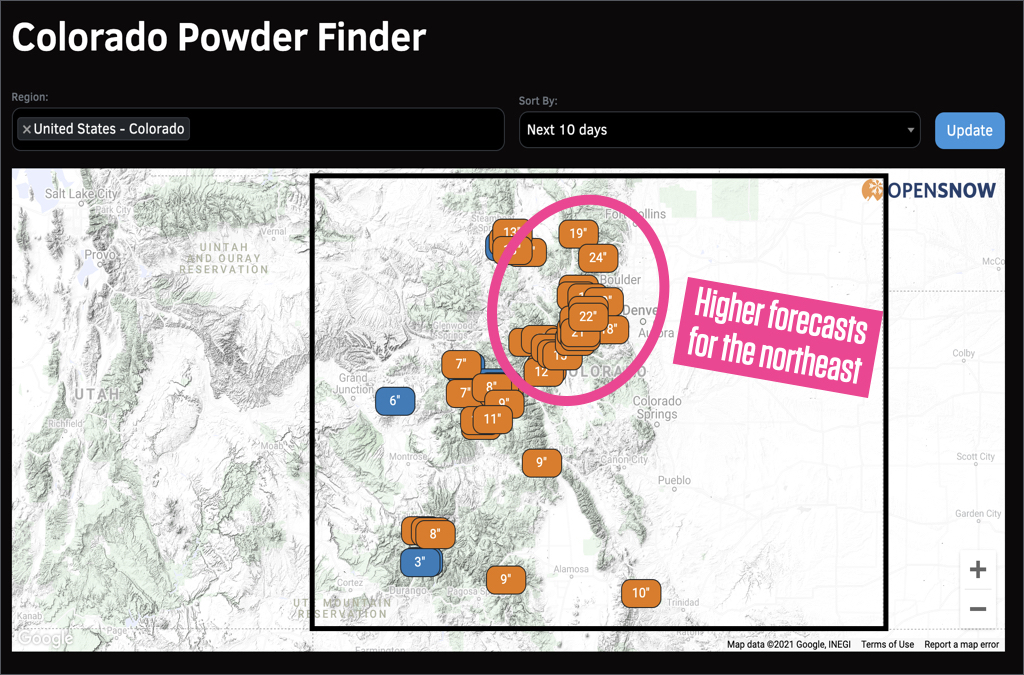 The bottom line for next week is that we should see snow during multiple days (I don't know which days are most favored) and while all mountains could see accumulating snow, right now the best chances for the deeper totals are over the northeastern mountains near and north of I-70 and near and east of the divide. I'll keep you updated as the forecasts evolve and we'll see if we can sneak out a real powder day (or two) during the middle of April.

Here is Sophie getting into the higher alpine and steeper terrain at Breckenridge! 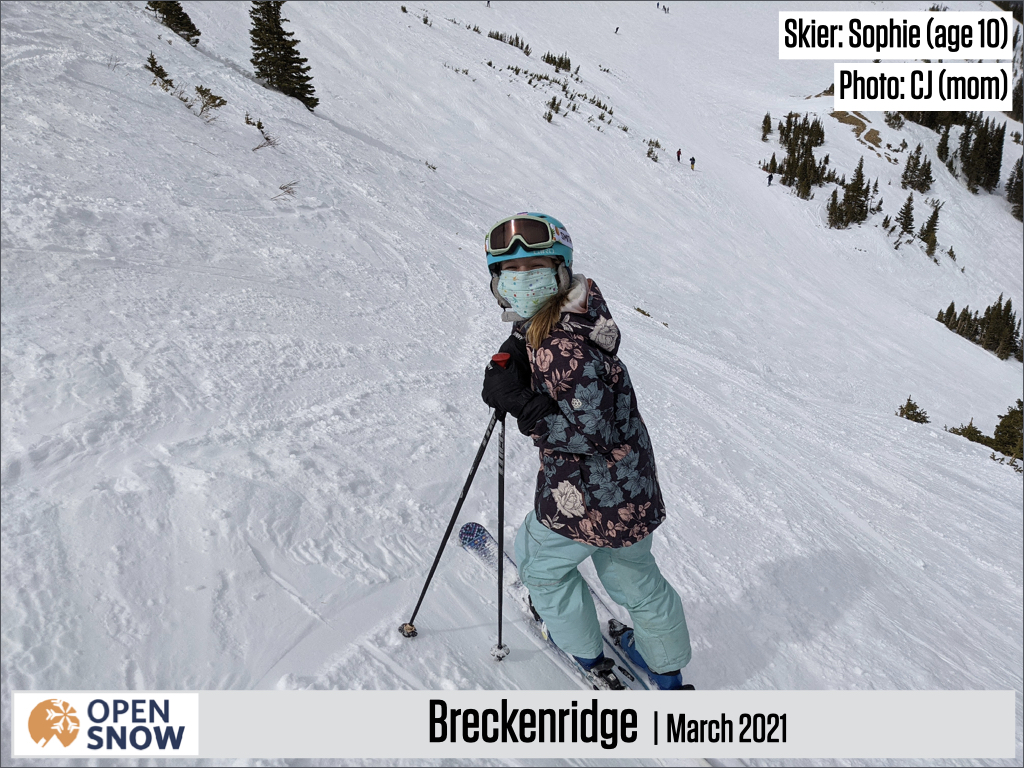