Showers through Friday night, then two more storms coming up 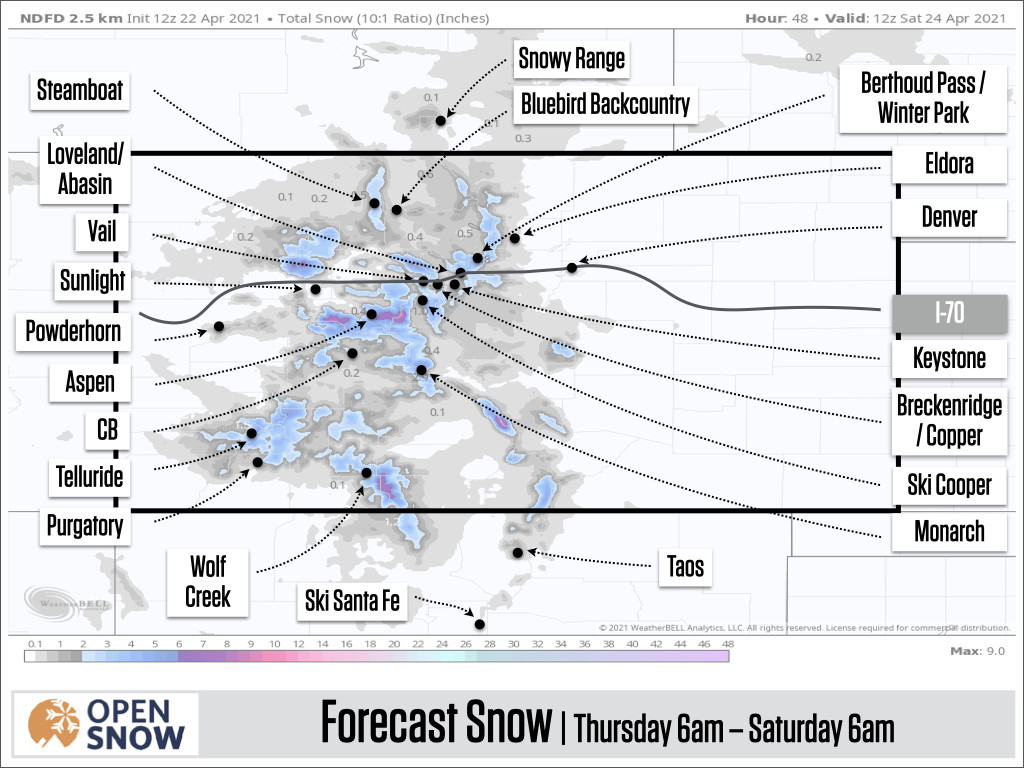 Thursday will bring showers to the northern and central mountains, then Thursday night will bring showers to the southern mountains. Friday's showers will flip back to favor the northern mountains. Accumulations should be just a couple of inches. Saturday, Sunday, and Monday will be dry. Then we'll see a storm on April 27-28 with more snow possible from May 1-5.

Before getting to the forecast, let's take a quick look at our current snowpack. The statewide peak snowpack was right around April 1st, and then we saw very warm weather which quickly melted a significant chunk of the snow. But the last week of cool and snowy weather helped our average snowpack to get a bit deeper and now we stand around 75% of the statewide average.

Comparing the blue line with the red line (average), our snowpack melt out is about 2-3 weeks ahead of schedule, but storms during the upcoming two weeks could keep our snowpack relatively steady or slow its melt, so we might be able to get closer to the red line in early May. 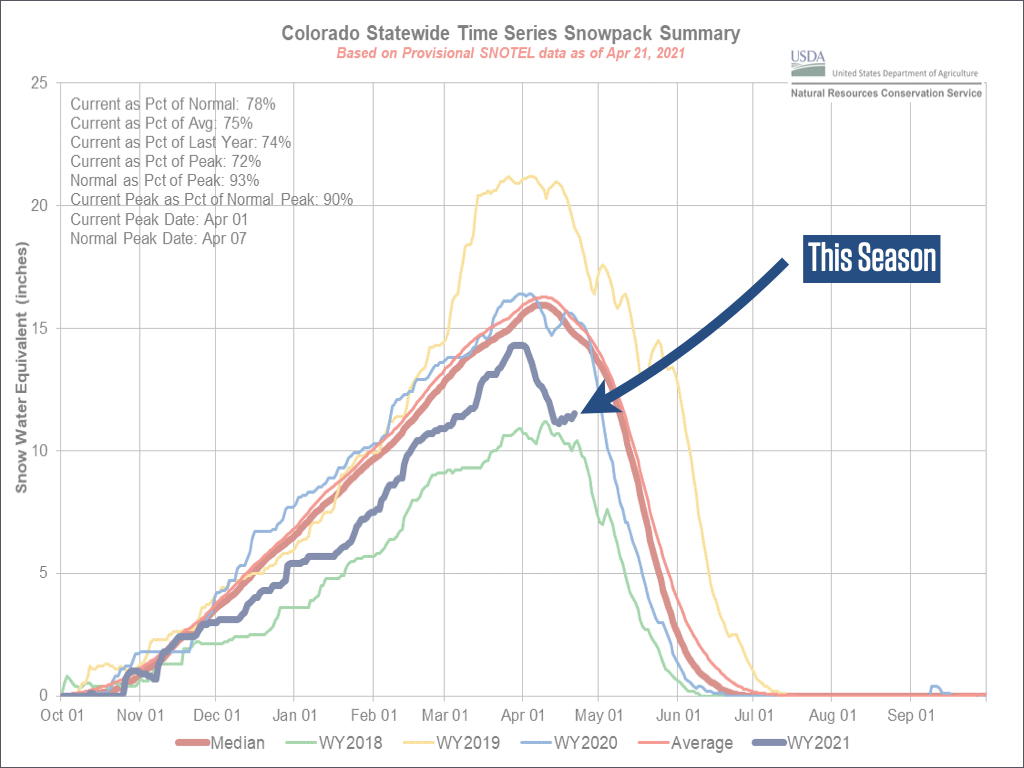 Now to the forecast.

On Wednesday, we saw showers with a coating to a few inches of accumulation across the northern mountains.

On Thursday, we'll see more showers with similar accumulations (a few inches) over the northern mountains.

Then on Thursday night, these showers will drift to the southern mountains and a few inches could fall there.

And on Friday, the showers will move back to the northern mountains with a few inches possible especially during the afternoon into the evening.

Total accumulations from Thursday morning through Friday evening look like the map below – just a couple of inches. If we're lucky, these few inches will keep some snow surfaces soft and fun. 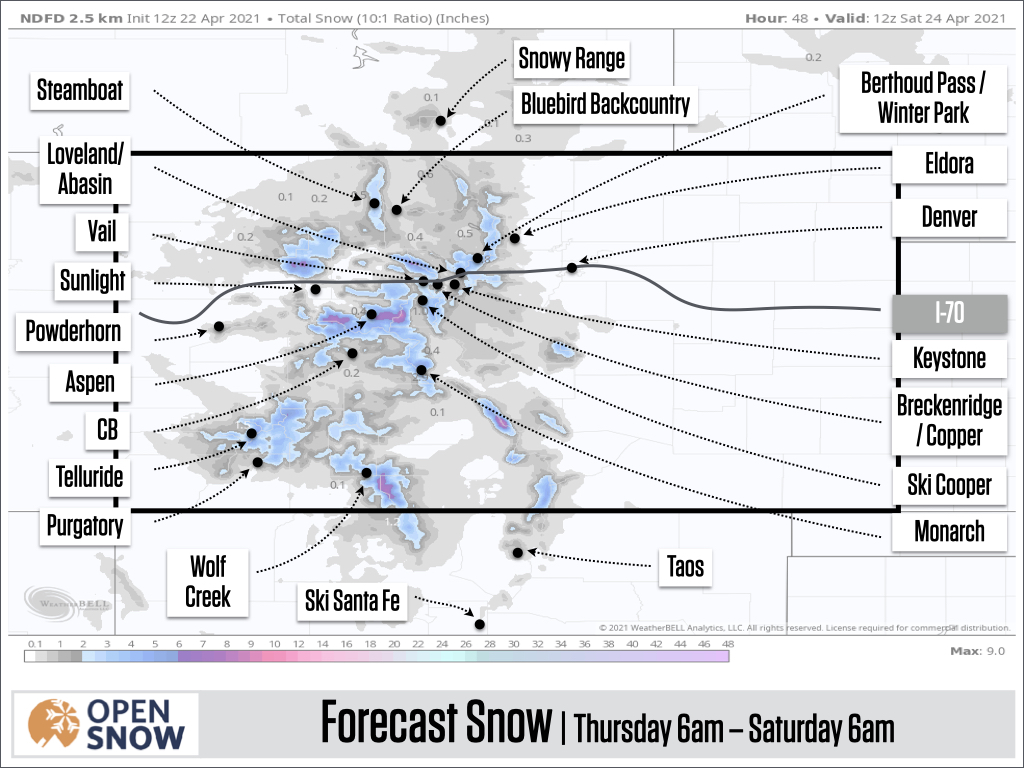 Saturday and Sunday and Monday should be dry and warm.

Saturday's high temperatures will be in the upper 30s to mid-40s with some clouds.

Sunday's high temperatures will be in the 40s to low-50s with fewer clouds.

Monday's high temperatures will be in the 40s with more clouds.

Looking ahead, there should be two storms in the next two weeks.

The first storm should bring snow from Tuesday, April 27 to Wednesday, April 28. There's a chance that there could be 6+ inches of powder on Wednesday. 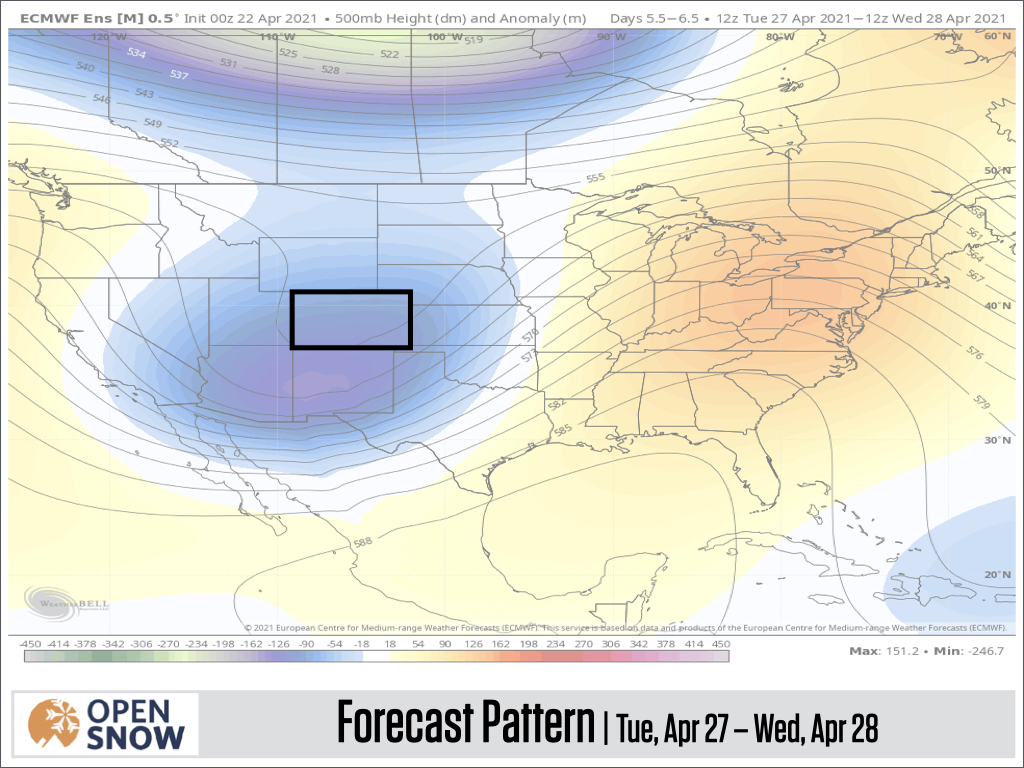 The second storm could arrive as early as Saturday, May 1 or Sunday, May 2, and the strongest part of the storm could move through from Monday, May 3 to Tuesday, May 4, with snow even lasting through May 5. 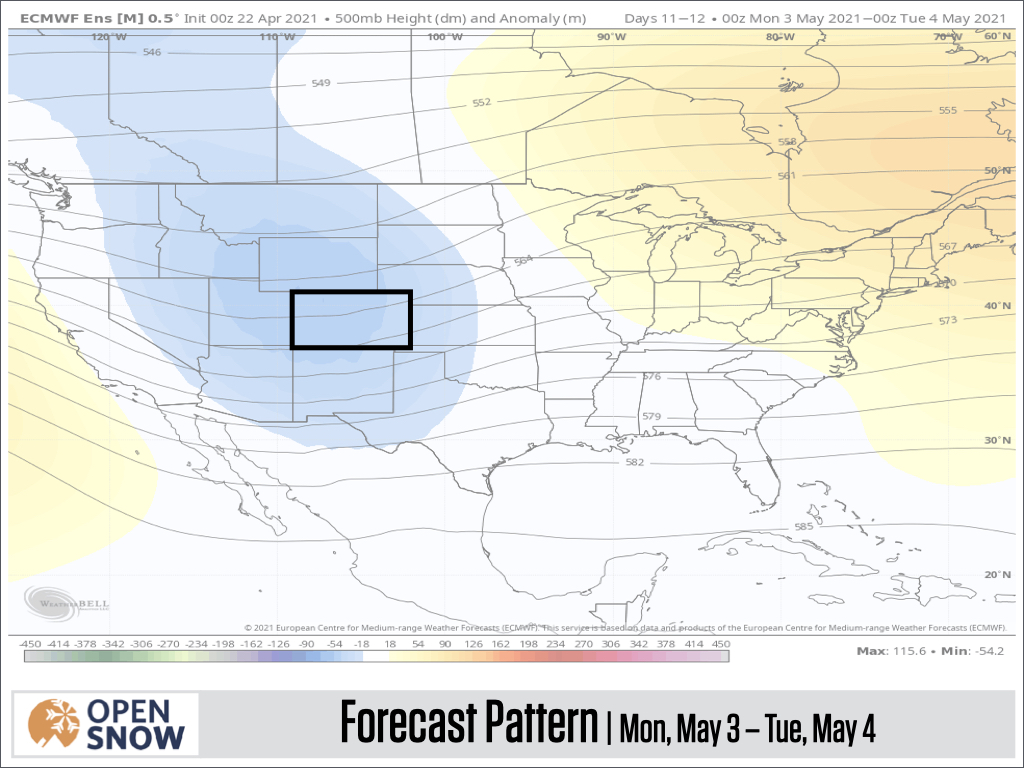 Most of the longer-range models agree about the storm on April 27-28 and there is more uncertainty around the potential snow on May 1-5.

It looks like winter is trying to hang on, and at least a few ski areas will be open through early May to take advantage of these potential flakes (Arapahoe Basin, Breckenridge, Loveland, Mary Jane).