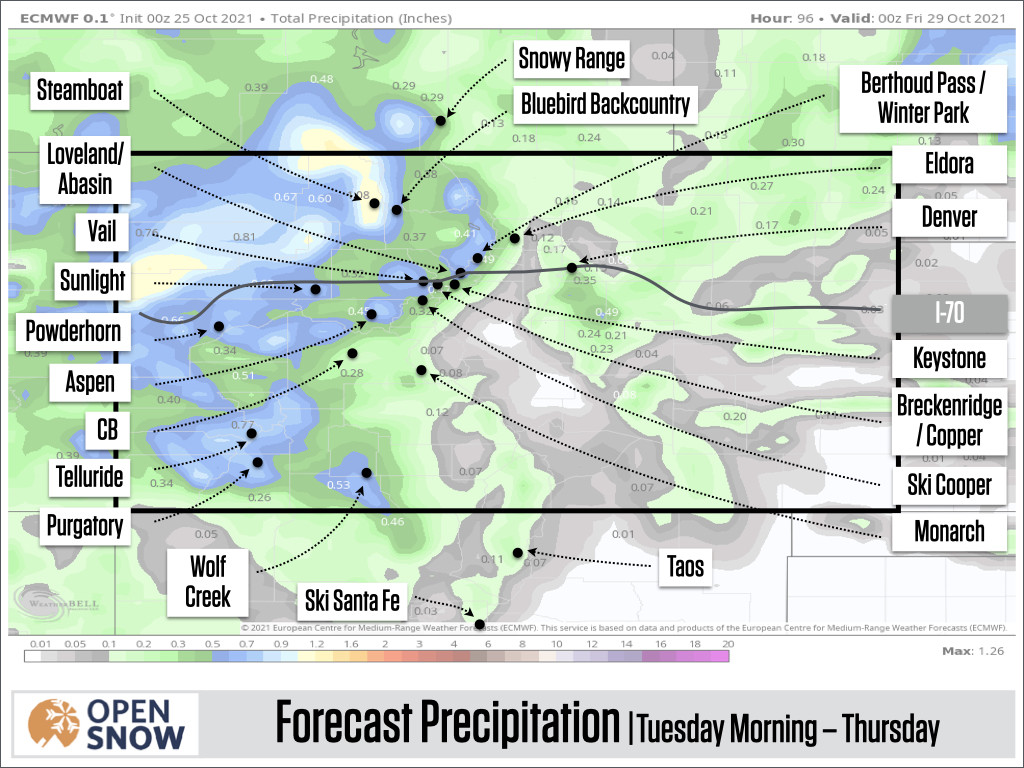 Monday will be dry while we wait for the storm to arrive. Snow will begin early on Tuesday morning, we'll see times of intense snow during the day on Tuesday, then we'll see cool temperatures and snow showers through Thursday morning. Average accumulations should be 4-8 inches with up to 8-12 inches for some spots. Another brief shot of snow and cool air is possible around Monday, November 1st.

Sunday began with lingering snow showers around sunrise and then the rest of the day cleared out with sunshine returning. Snowfall on Saturday night and Sunday was a coating to 2 inches for most mountains with around 3 inches or a bit more around Crested Butte and Buffalo Pass (north of Steamboat).

Monday will be dry and partly to mostly cloudy as we wait for the next storm to arrive. As of Monday morning, the storm is dumping a LOT of rain and high-elevation snow over California. It'll put an end to the fire season there and will start the high-elevation snowpack, but at the expense of flooding and mudslides.

Monday morning's radar animation shows the intense rain and snow over California with rain and snow spreading across Nevada and into Idaho as well.

Tuesday is when the storm will arrive here in Colorado.

On Tuesday morning, we'll see snow begin to fall near and above 9,000 feet (with some rain below that).

Tuesday during the day is when we'll see the most intense rounds of snow as the main piece of storm energy crosses the state. Temperatures will cool with snow eventually falling down to many valleys.

Then from Tuesday evening through Thursday morning, moisture in a northwest flow should keep snow showers going for most northern mountains with some flakes as well for the Aspen area and the northern San Juan mountains.

Storm total snowfall should be 4-8 inches on average across the state, with 8-12 inches for some areas that are either favored by the intense snow on Tuesday or the lingering northwest flow on Wednesday into Thursday.

The areas that have the best chance for double-digit accumulations are the southern mountains, thanks to a favorable position for Tuesday's snowfall, the Flattops in northwestern Colorado which might do well during both parts of the storm, and maybe around and north of Steamboat.

Below is the total precipitation forecast from the European model. Converting to snow, blue areas show about 6-10 inches of snow with light blue and orange likely getting closer to double-digit snowfall. 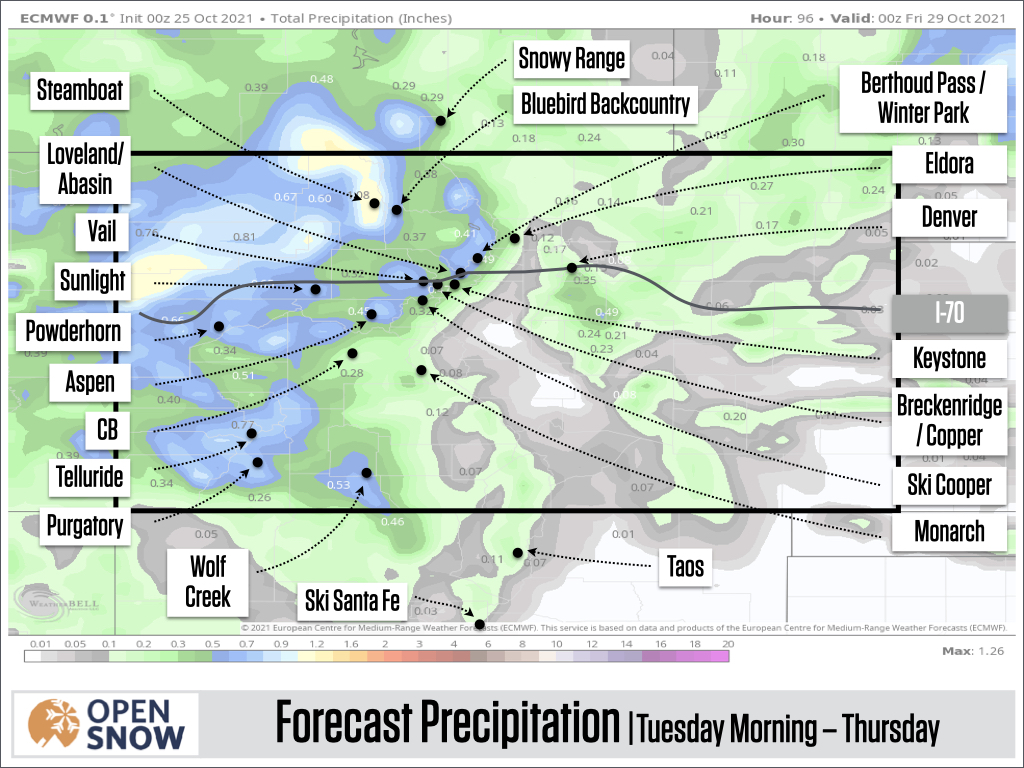 The crapshoot is these types of storms can come during the first part of the system when cells of intense precipitation can produce more (or less) snow for a certain mountain while a nearby mountain gets a much different amount. Also, the snow showers from northwest flow on Tuesday night through Thursday are always tricky to figure out and can sometimes result in some upside surprises for the northern mountains.

While the snowfall will be welcome and should provide for some powder turns across the state on Tuesday afternoon, Wednesday, and maybe even Thursday morning, the three or so days of cold temperatures will likely be as or even more helpful as it'll allow crews to crank up the snowmaking equipment.

Friday, Saturday, and Sunday should be dry, mostly sunny, and slightly warmer each day. Nightime snowmaking should still be possible.

From later Sunday through Monday, a surge of cold air and maybe some snow could clip the eastern mountains and the eastern plains. The animation below shows this colder air as the green colors which move from the northwest through eastern Colorado.

After this potential surge of colder air around November 1st, I have no idea what will happen. As we head toward the first weekend of November, all models are all over the place showing anything from dry high pressure to a strong storm over the southwest. We'll have to wait and see how it shakes out.

Save the dates! These talks will be in person and subject to some COVID restrictions so that we all stay as safe as possible while getting excited about the season. I'll post more details when I have them.