What happened on Wednesday morning? 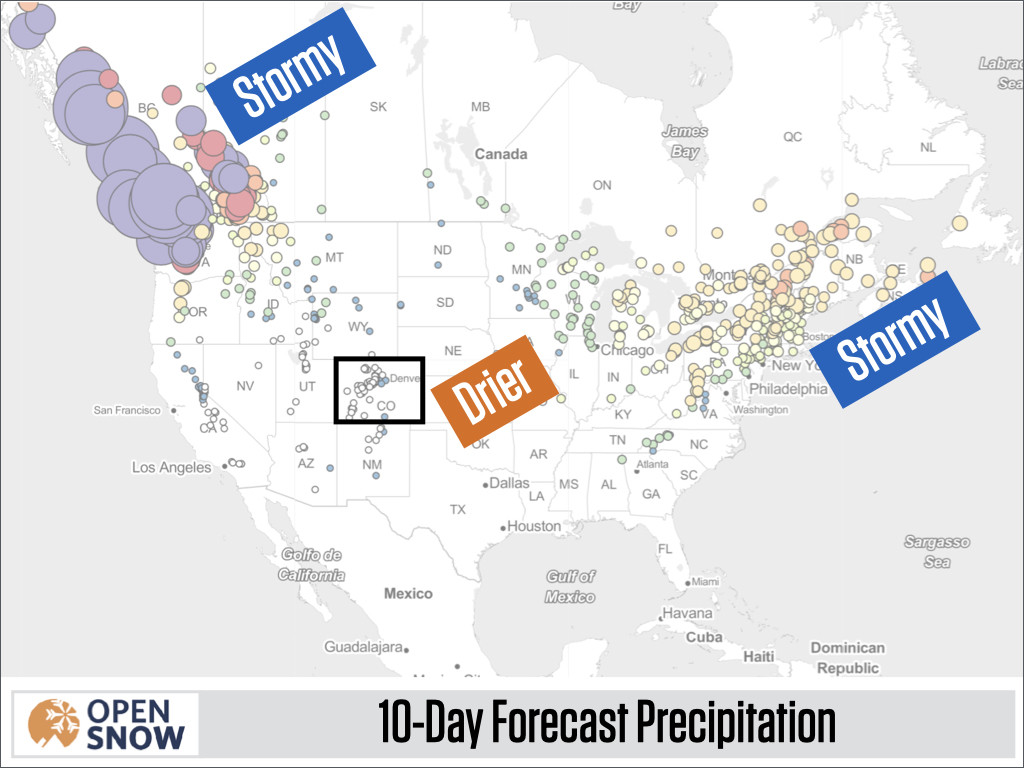 On Wednesday morning, some mountains received an unexpected 5-7 inches, and we'll talk about why we saw the surprise. Otherwise, Thursday morning's story is cold temperatures in the single digits with highs in the 20s (good for snowmaking). Looking ahead, there might not be much (or any) snow in the next 7-10 days, though snowmaking should be able to continue.

Before getting to the forecast, let's take a quick look back to Wednesday morning.

Going into Wednesday's storm, we had the highest confidence that the southern mountains would see 2-4 inches and had lower confidence elsewhere with likely snow amounts of just a dusting to maybe a few inches.

The southern mountains did get about as much snow as we expected with 3-5 inches.

However, some central and northern mountains (Crested Butte, Aspen, Beaver Creek, Vail, Copper, Breckenridge) saw much more than expected with about 6-8 inch totals. Why the upside surprise?

I *think* the surprise occurred because more moisture pushed north (to the mountains that I listed above) than was expected by the models. Sometimes surges of southern moisture can move in faster and farther north than models expect. That's my only reasonable explanation for the surprise.

The 'bonus' snow on Wednesday morning did not show up in the forecast models until the storm was occurring.

Below was the forecast for snow on Wednesday morning made 20 hours in advance. I circled the area that received 6-8 inches of unexpected snow, and you can see that this model (like all the others) did not forecast much. 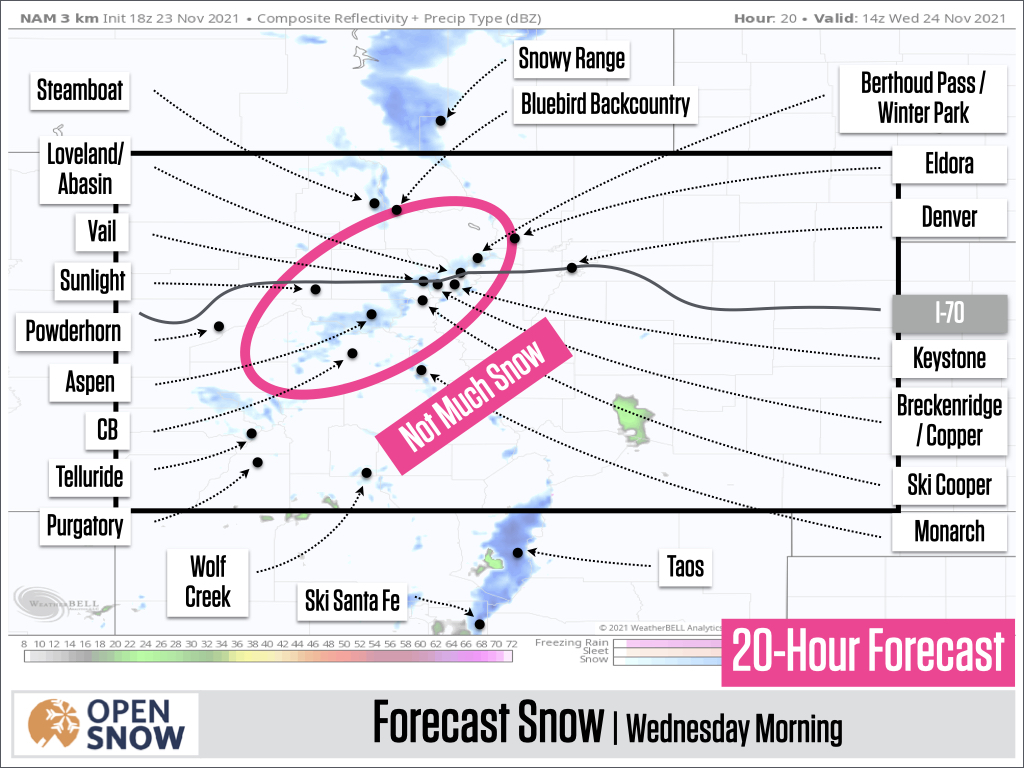 Then, as the storm was ongoing on Wednesday morning, the model (below) suddenly showed a lot of snow falling. But of course, this was a useless forecast because the storm was already happening when this model became available. 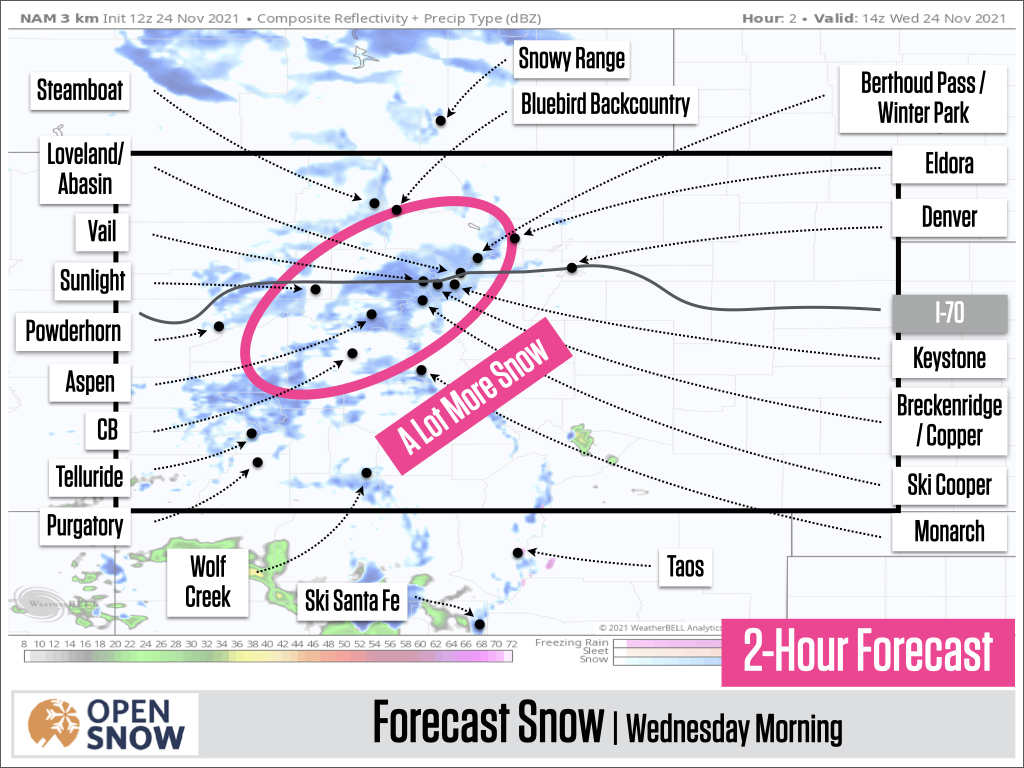 To wrap up Wednesday morning's storm, the storm itself wasn't a surprise, but the 6-8 inches that it produced for a handful of mountains was a surprise, and I think the reason for the bonus snow was that moisture pushed just a bit farther north than any model expected. We'll take the snow!

Thursday morning is cold with temperatures in the single digits. Snowmaking is in full force. Thursday's high temperatures will stay chilly, rising into the low 20s in many spots. Snowmaking should be able to continue most or all of the day and this is helping some mountains to open limited additional terrain.

Starting on Friday, November 26, each day will be roughly the same with lows in the 20s (ok for snowmaking), highs in the 30s (comfortable skiing and riding), and partly-to-mostly sunny skies.

The weather pattern for the next week (and maybe beyond) should look like this with stormy weather in the Northwest and the Northeast and not much happening over the central Rockies. 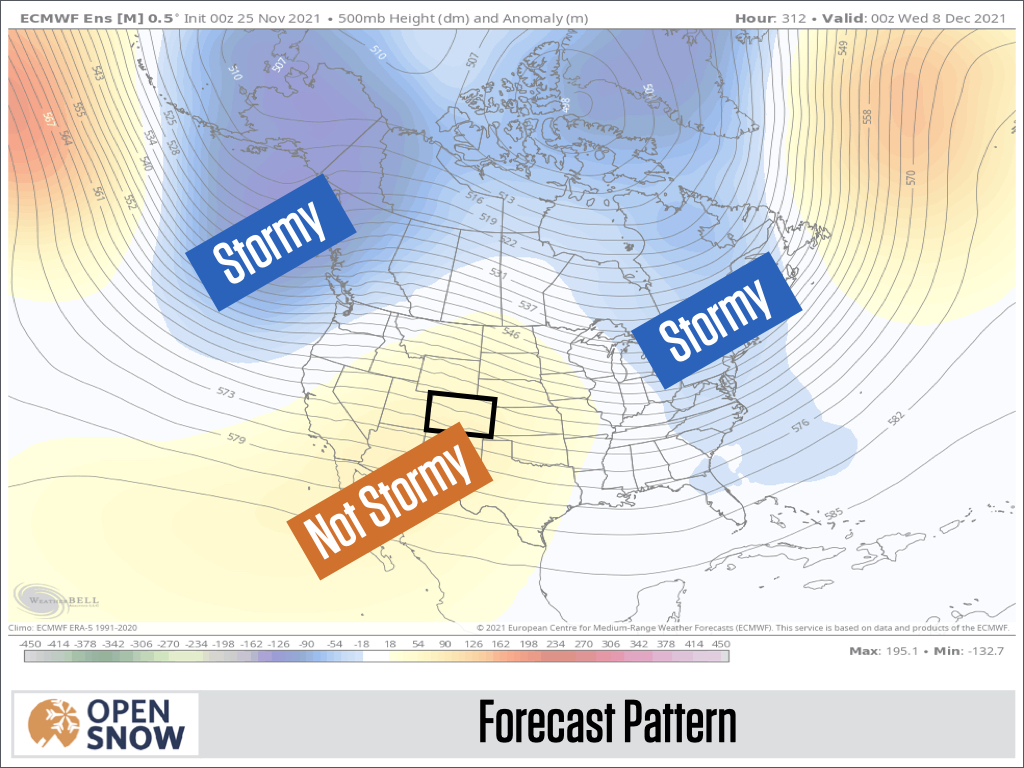 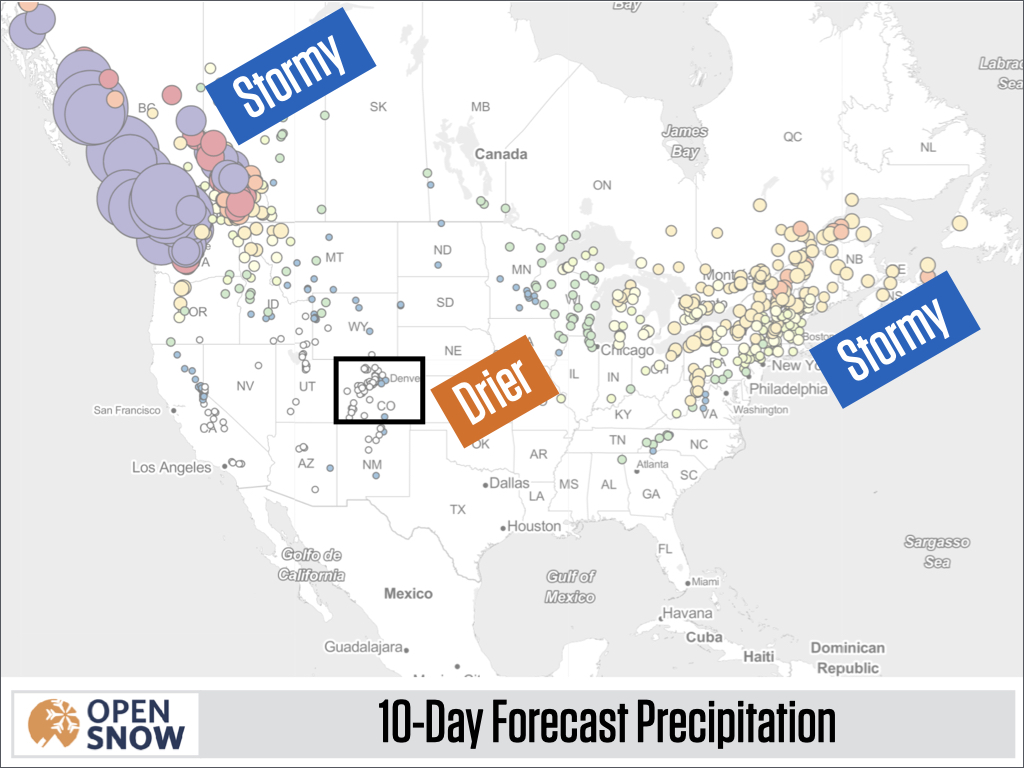 The next glimmer of hope for snow will be around Friday, December 3rd when a storm coming from the Northwest might move close enough to Colorado for some snow, with odds favoring the northern and eastern mountains. But the trend has been to keep this (and other) storms farther north, so my optimism for a big swing toward snowy weather in early December is fading.

At least our mountains in Colorado are at a relatively high elevation, so any snow on the ground is mostly sticking around and the higher elevations will have decent coverage with snowmaking filling in some gaps.

But we could use a lot of natural snow as well, with our snowpack at about 40-80% of average (and these numbers will decline over the next 7-10 days of dry weather).

I'm thankful for the snow (natural and machine-made) that we have and hopeful that we'll see a change in the pattern sometime in December.

Thanks for reading and Happy Thanksgiving to you and your friends and family!