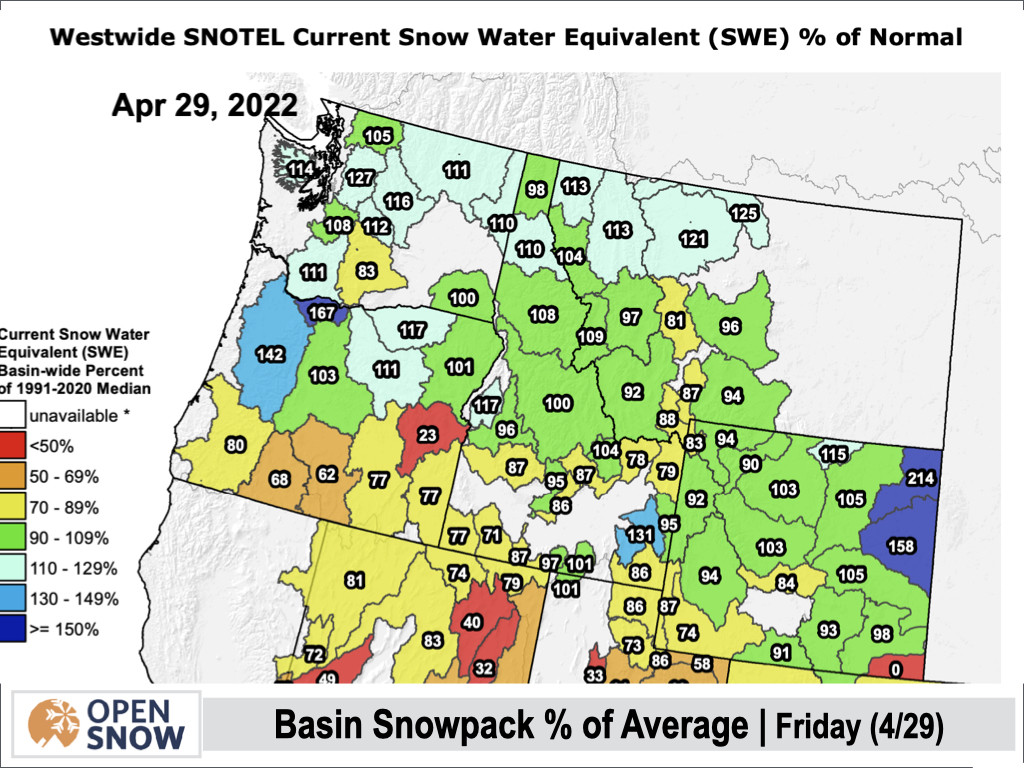 Snowpack is near to above average across most of the PNW as of late April. It has been an inconsistent, feast-or-famine type winter though with heavy early season and late season snowfall, but we also had a significant mid-season drought. Looking forward, a storm will impact the region Friday night-Saturday with snow above 4k in WA & 5k in OR. We'll see a break Sun, then another storm arrives Mon. 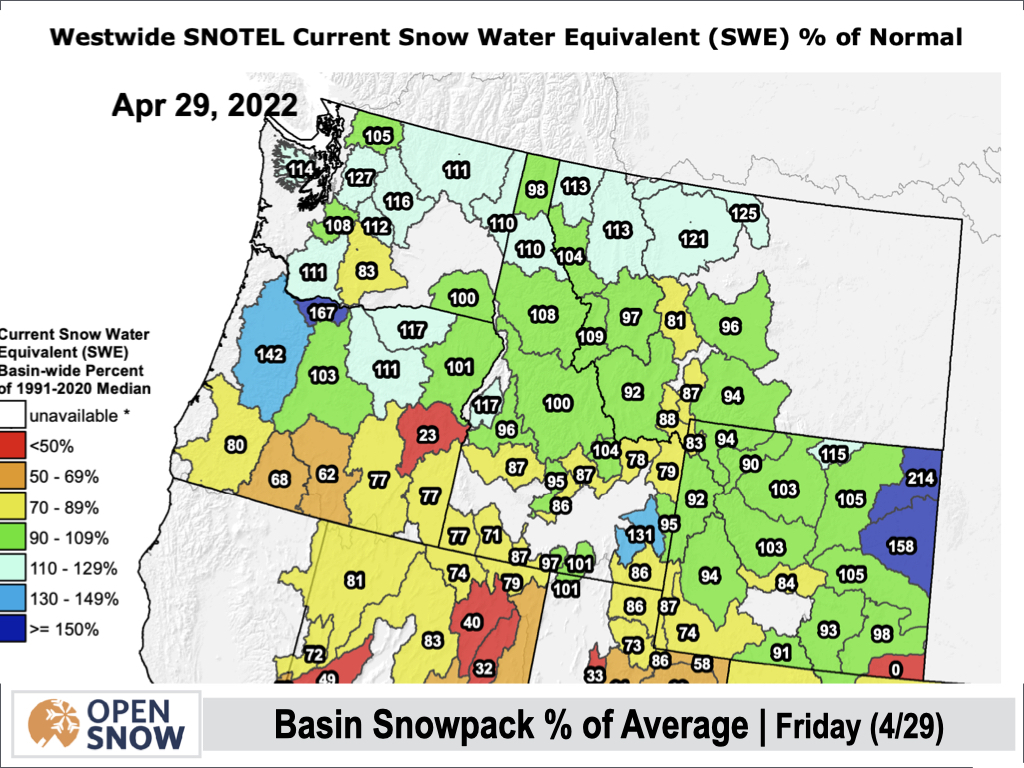 The Western U.S. as a whole is facing a widespread and significant drought. But the Northwest is in better shape, relatively speaking. The Cascades and West Coast of Washington and Northern Oregon are drought-free, and most of the Idaho Panhandle mountains are drought-free as well (but are categorized as abnormally dry). 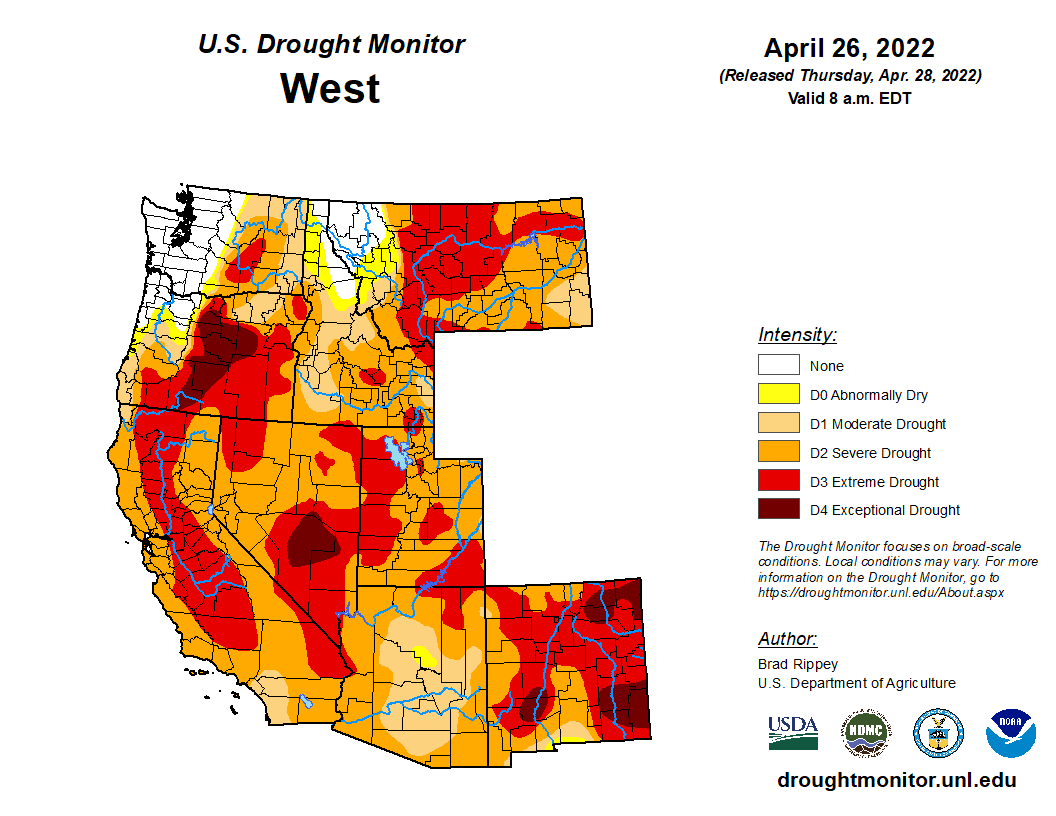 As far as the season progression goes, the "wet season" got off to a big start in the fall of 2021. October and November were extremely wet across Washington and to a lesser extent Oregon, though temperatures were also much warmer than average in November which resulted in more rain than snow and a slow start to the snow accumulation season.

In fact, most resorts had a delayed start in December due to the early season warmth. However, from mid December through early/mid-January, we saw an extremely snowy period with frequent storms and colder/more seasonal temperatures.

By early January, snowpack was above average throughout the Northwest, but then came our mid-winter dry spell. From mid-January through mid-March, snowpack basically flat-lined across the Cascades due to infrequent snow events and periodic warm spells. The Inland Northwest did ok with more frequent storms and colder temps compared to the Cascades, but mid-winter snowfall was less than average here as well.

The pattern started to turn more active during the second half of March with more frequent storms. Then April arrived and we saw a significant change in the weather pattern.

Frequent storms including a number of heavy snow events along with unseasonably cold temperatures have been the big story throughout April. In fact, this could end up being one of the coldest Aprils on record for the region. Many areas saw some of their best skiing conditions of the season this month.

Take a look at the snowpack over the course of the season for several areas across the Northwest to get an idea of how the season played out. 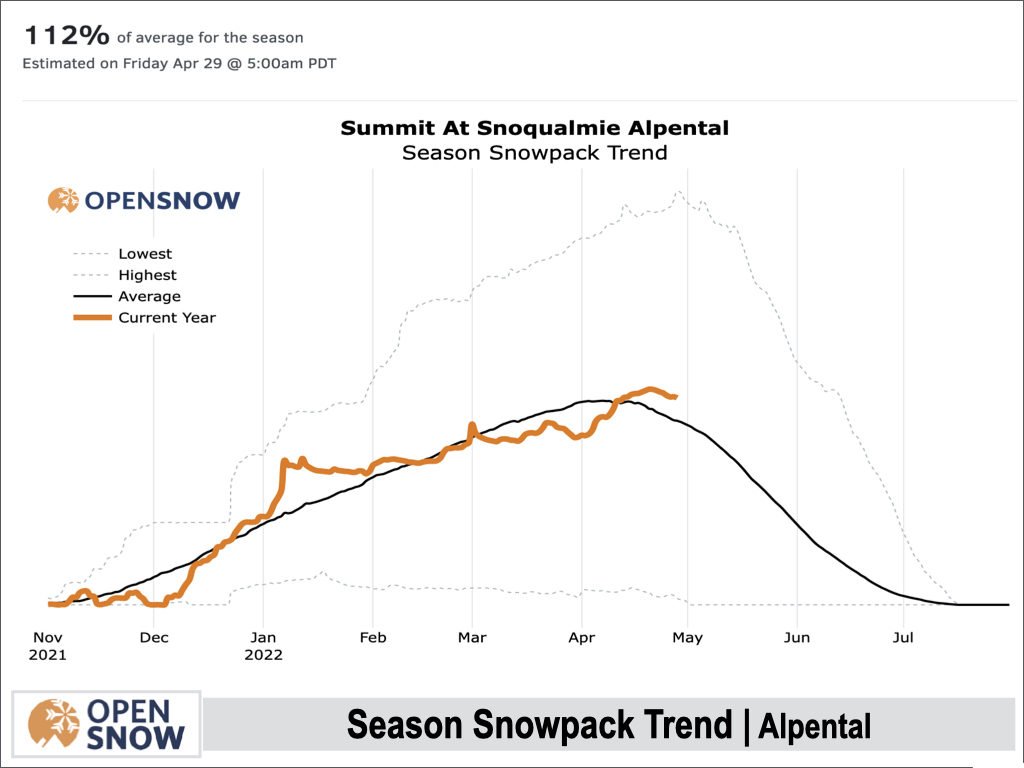 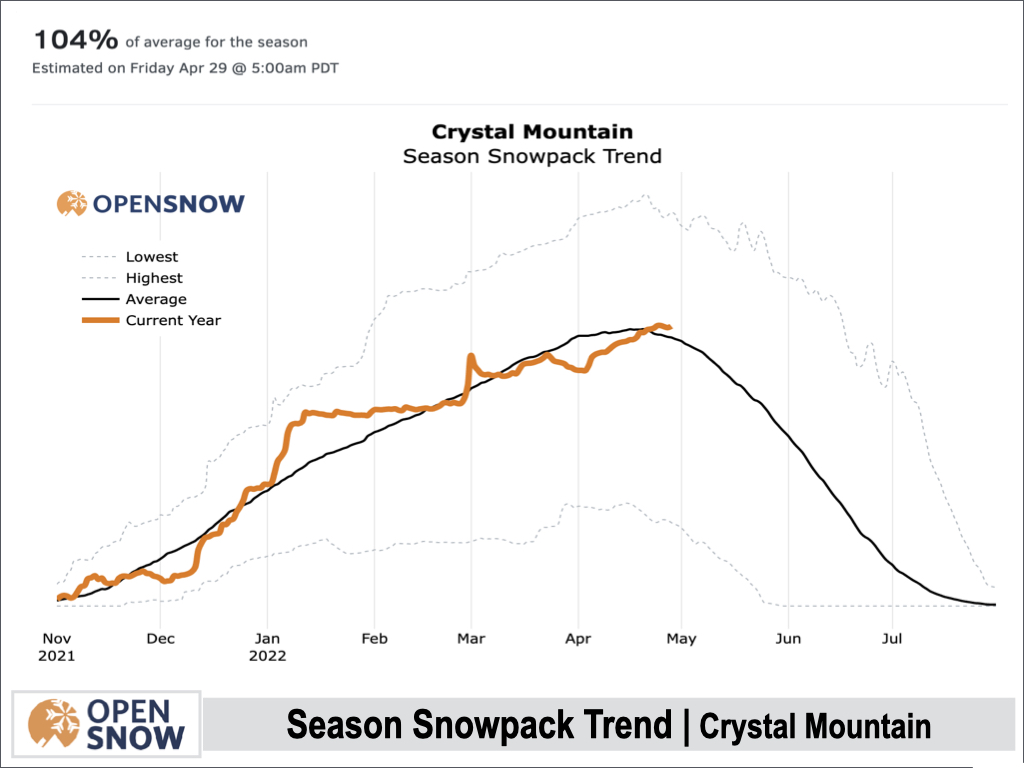 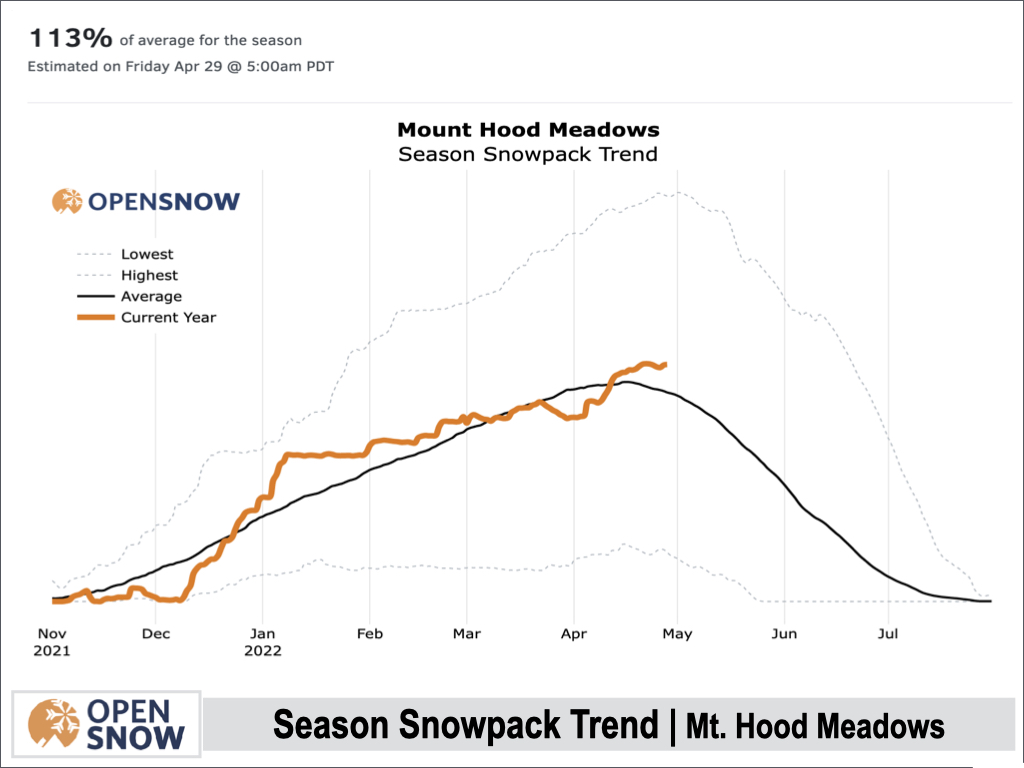 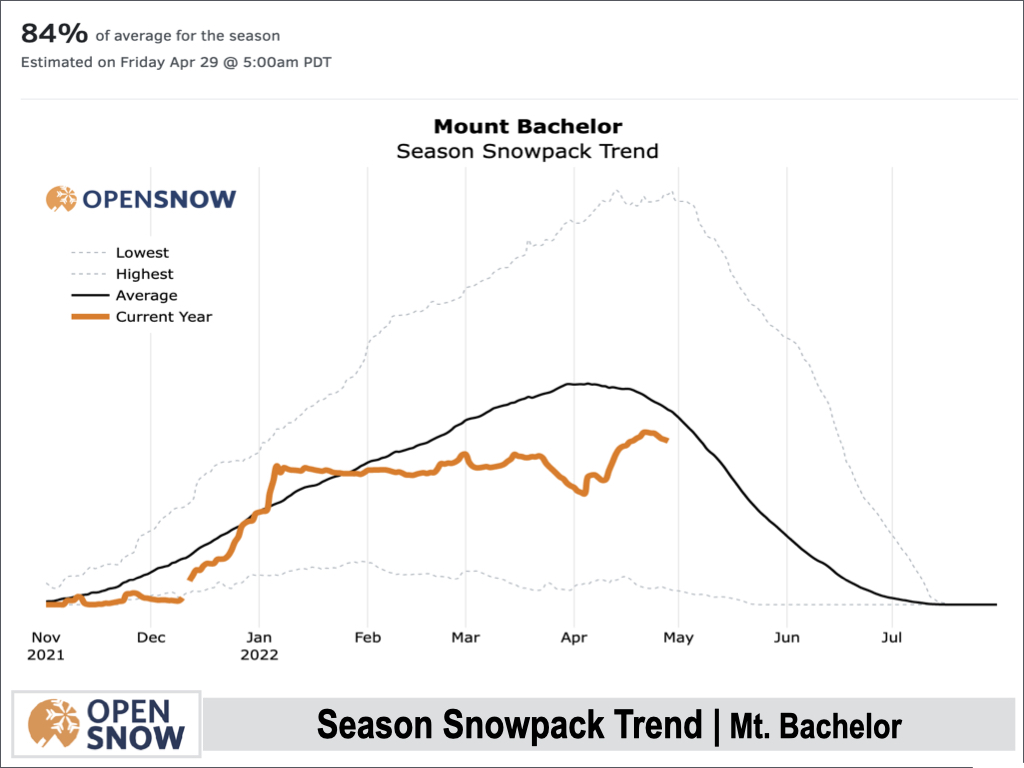 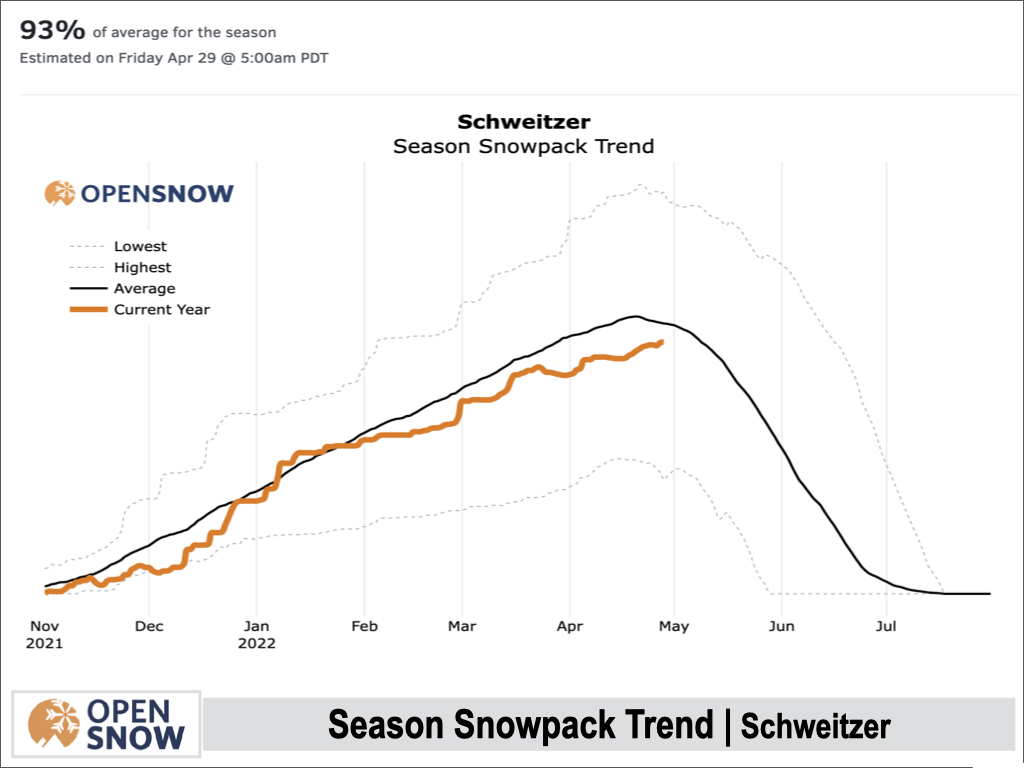 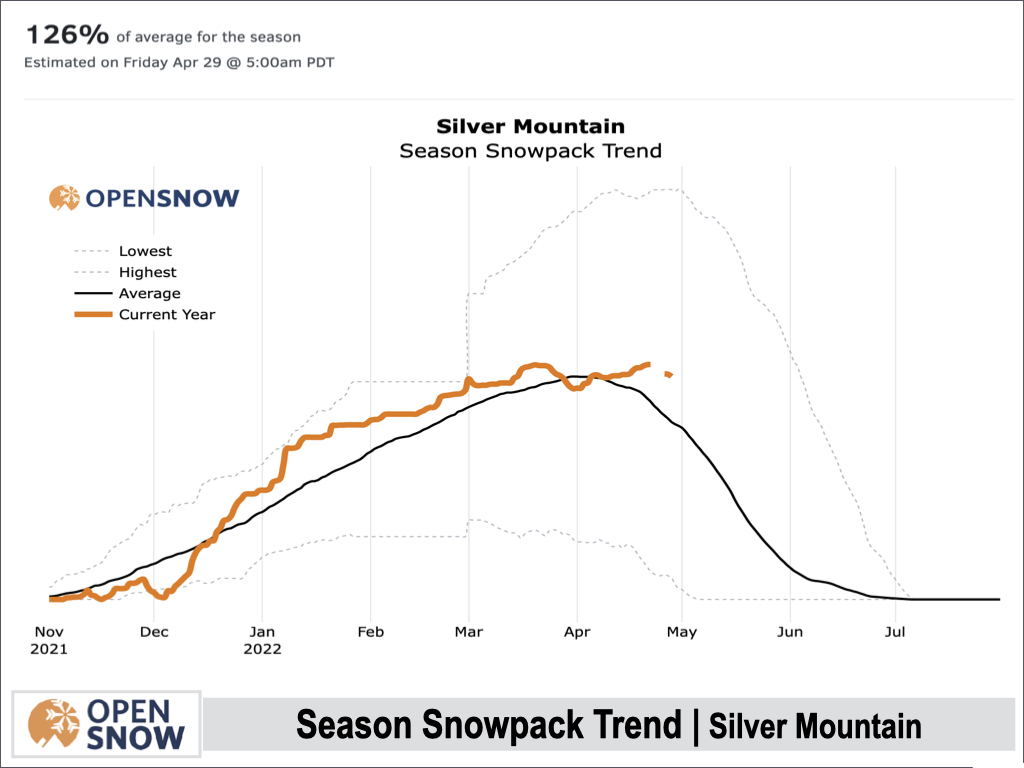 Friday has been a pleasant day across the Northwest with warmer temperatures and dry conditions. However, clouds are on the increase on Friday afternoon as the next storm approaches.

Taking a look at the satellite image below with wind barbs showing wind direction (where the wind is blowing from) at 500-millibars/18,000 feet, we can see heavy cloud cover and precipitation encroaching upon the West Coast on Friday afternoon. 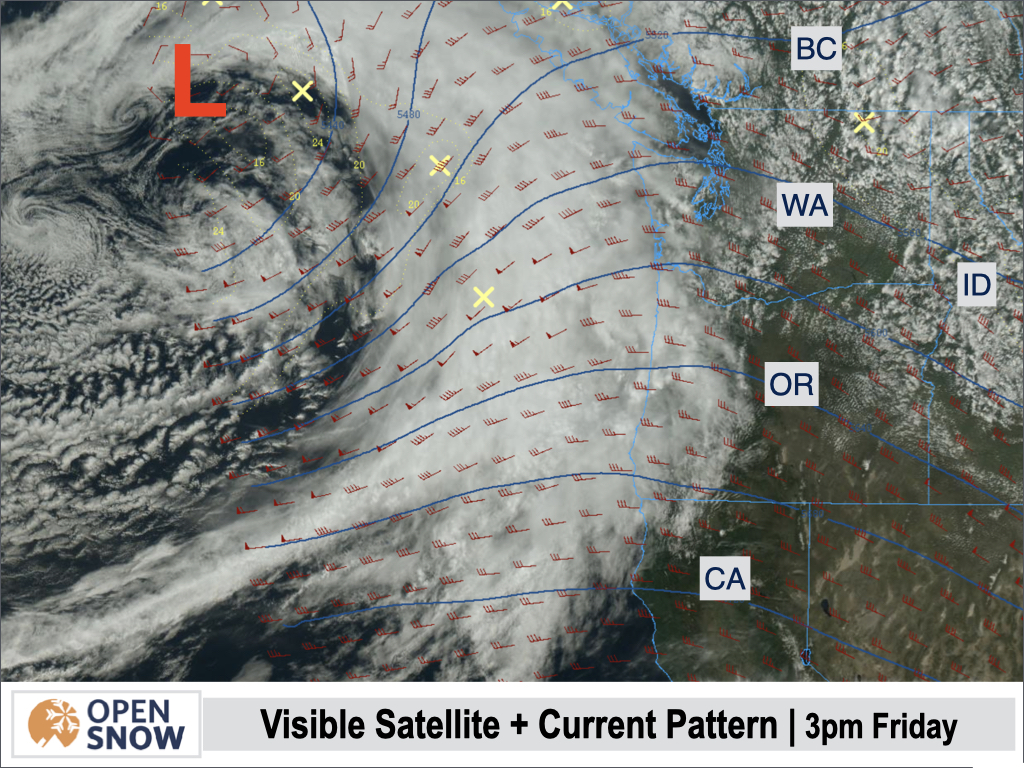 At the surface, we can see an approaching warm front still located in the Pacific that will arrive on Friday evening, followed by a cold front that will across the region on Saturday morning. 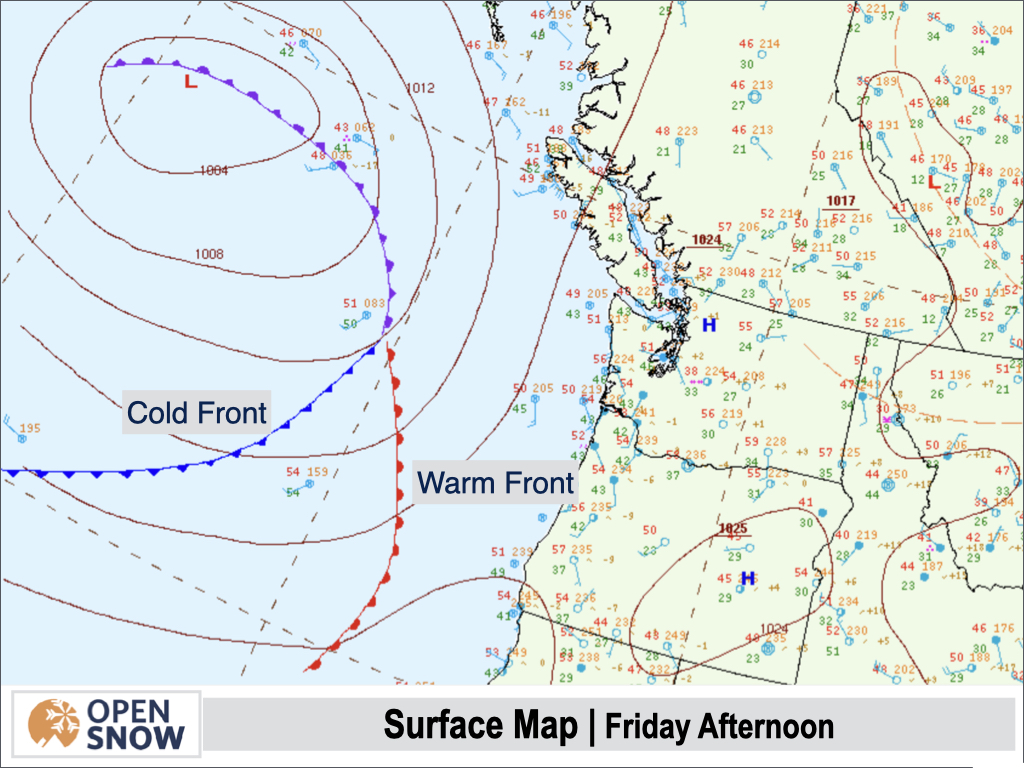 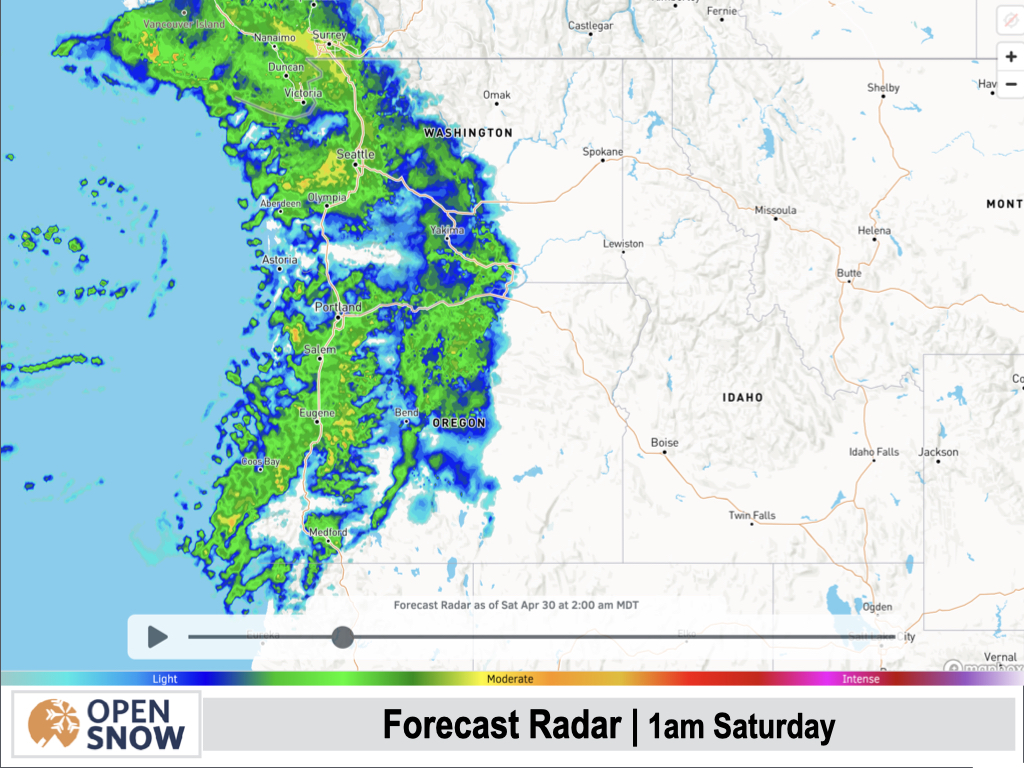 During the day on Saturday, the main band of precipitation will weaken a bit with lighter rain/snow moving across the Inland Northwest. Snow levels will range from 5,000-6,000 feet across the Idaho Panhandle Mountains.

On the backside of the storm behind the cold front, an unstable airmass and lingering moisture in an onshore flow will result in numerous showers developing across the Cascades throughout the day with snow levels in the 4,000-5,000 foot range for WA and 5,000-6,000 foot range for OR.

There will be enough instability that we could also see some thunderstorms on Saturday afternoon as well, especially in Oregon. Shower activity will then taper off on Saturday evening. 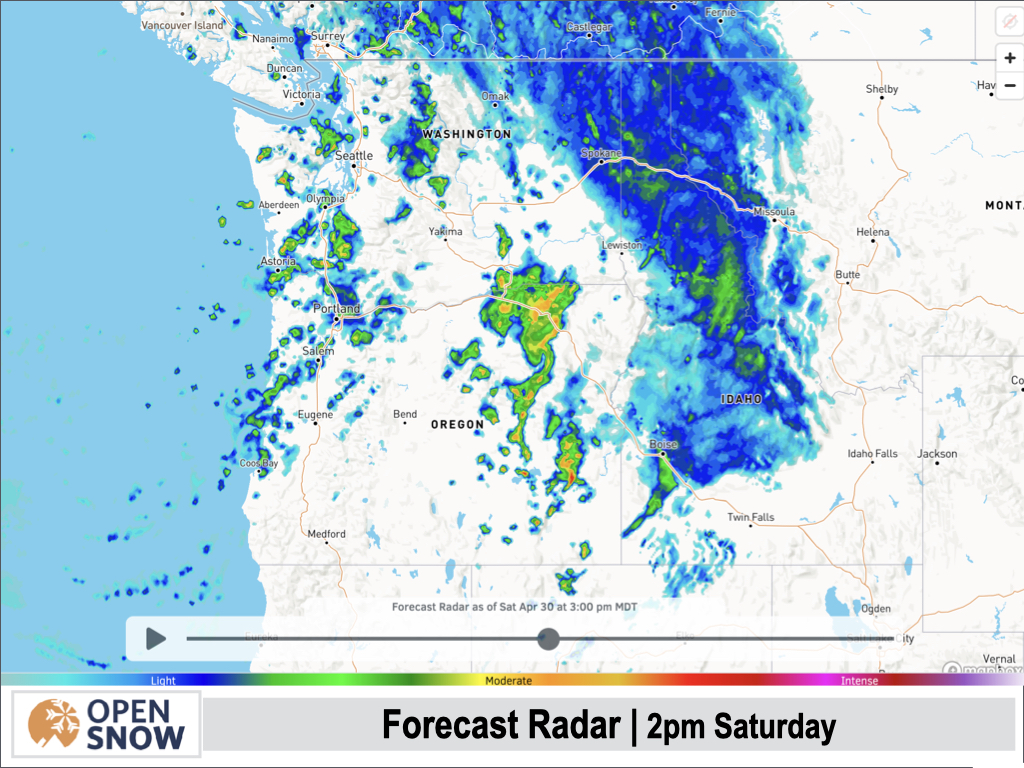 Snow totals between about 4,000-7,000 feet over the Cascades will range from 2-6 inches through the end of the day Saturday with isolated higher amounts possible. In other words, fresh turns can be expected on the upper slopes of ski areas that will be open on Saturday. 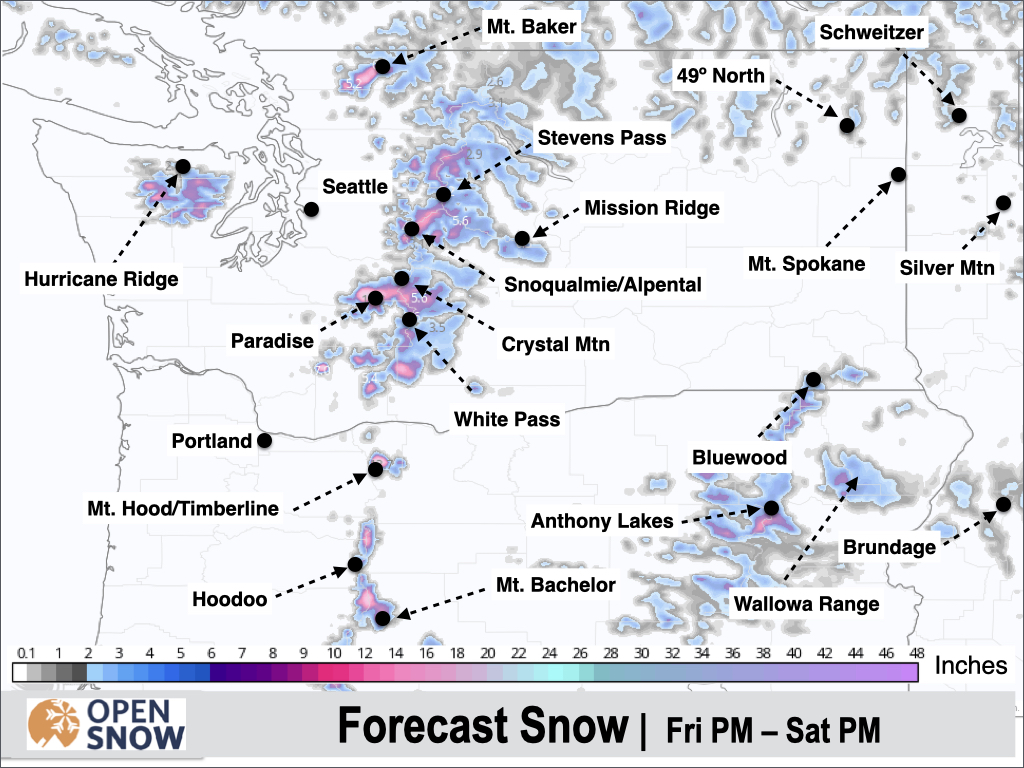 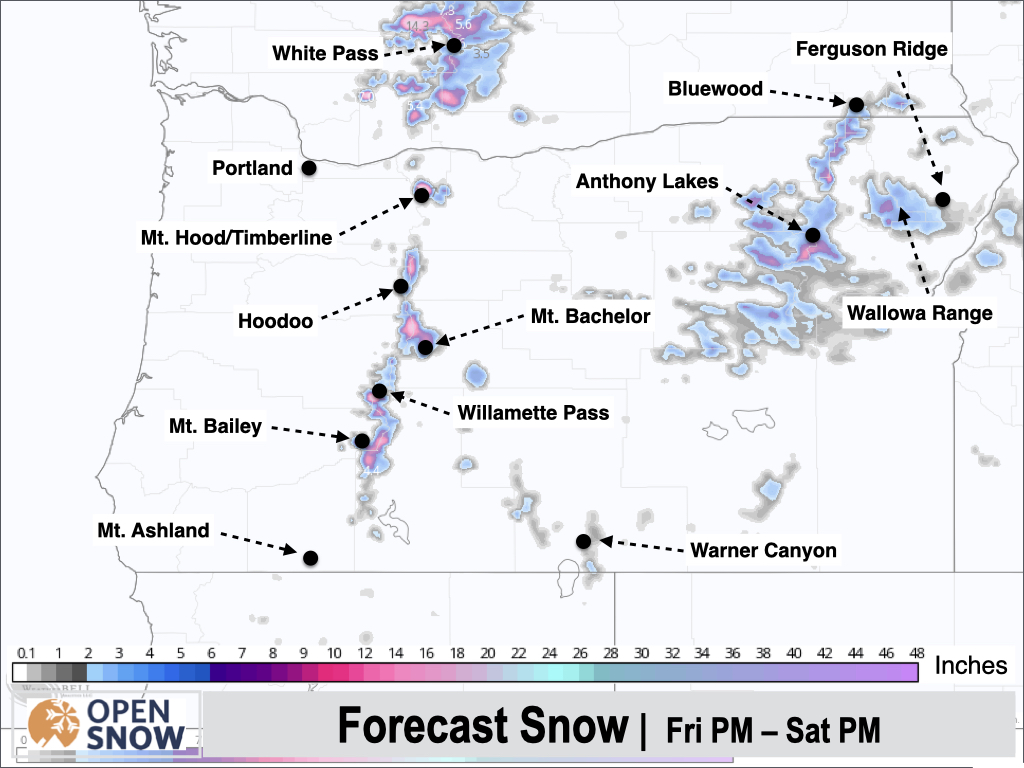 We will see a nice break in the action on Sunday with some breaks in the clouds along with warmer temperatures. The new snow will not stay fresh for long if at all, so if you're hitting the slopes, I would go in with the expectation of more spring-like conditions.

Once again, the break will be short-lived as another storm arrives on Sunday night and Monday. 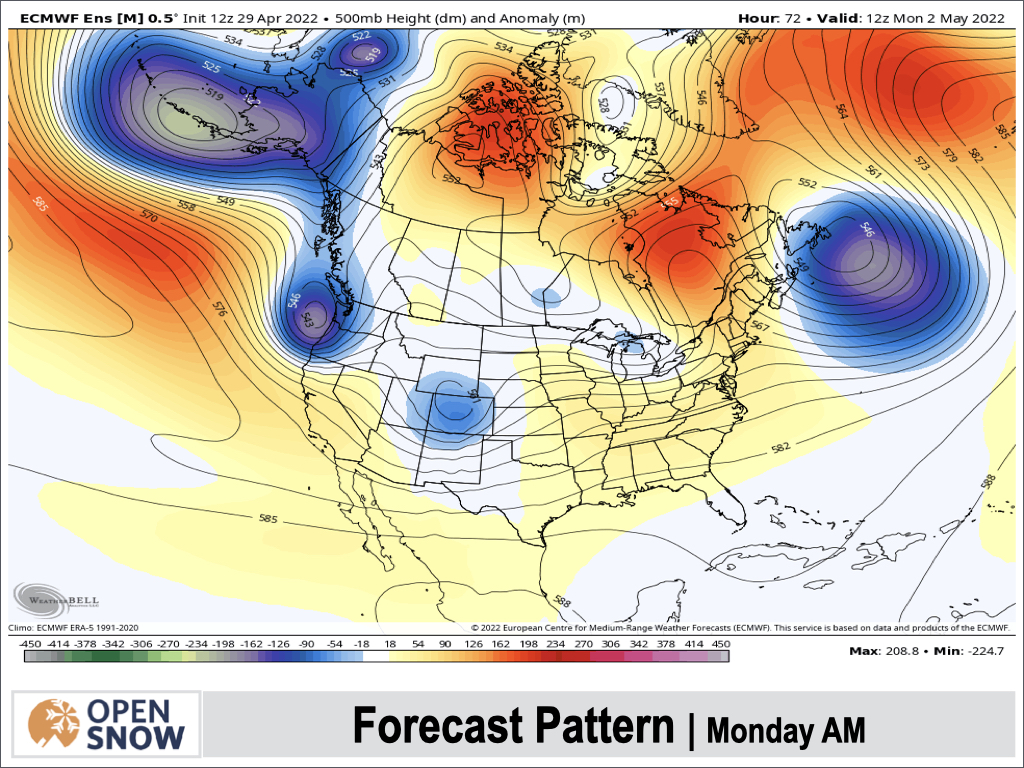 This storm will make landfall near the WA/OR border, but then will develop into a cut-off low pressure system and will take more of a southerly track across the state of Oregon.

Snow will develop over the Cascades late Sunday night and will really pick up on Monday morning, favoring the Central and Southern Oregon Cascades. Upslope southeasterly flow around the center of the low could also result in some decent precipitation across the eastern slopes of the Southern Washington Cascades. 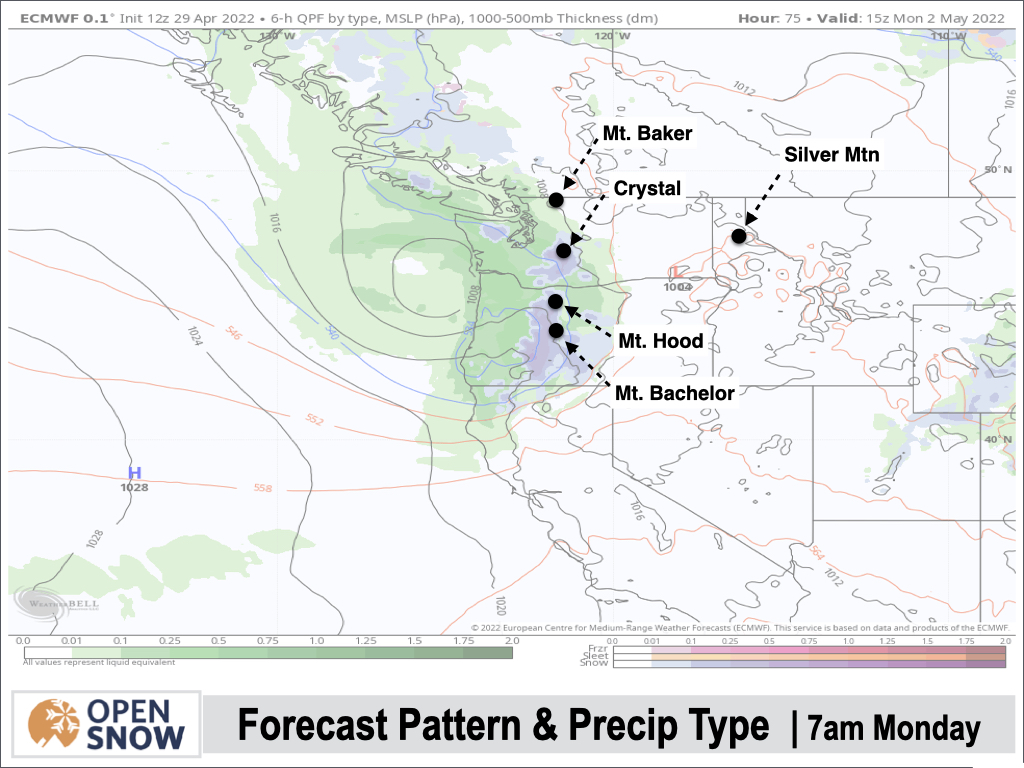 By Monday afternoon, the focus of the heaviest snow/rain will move into Northeast Oregon, including the Blue Mountains and Wallowa Mountains. 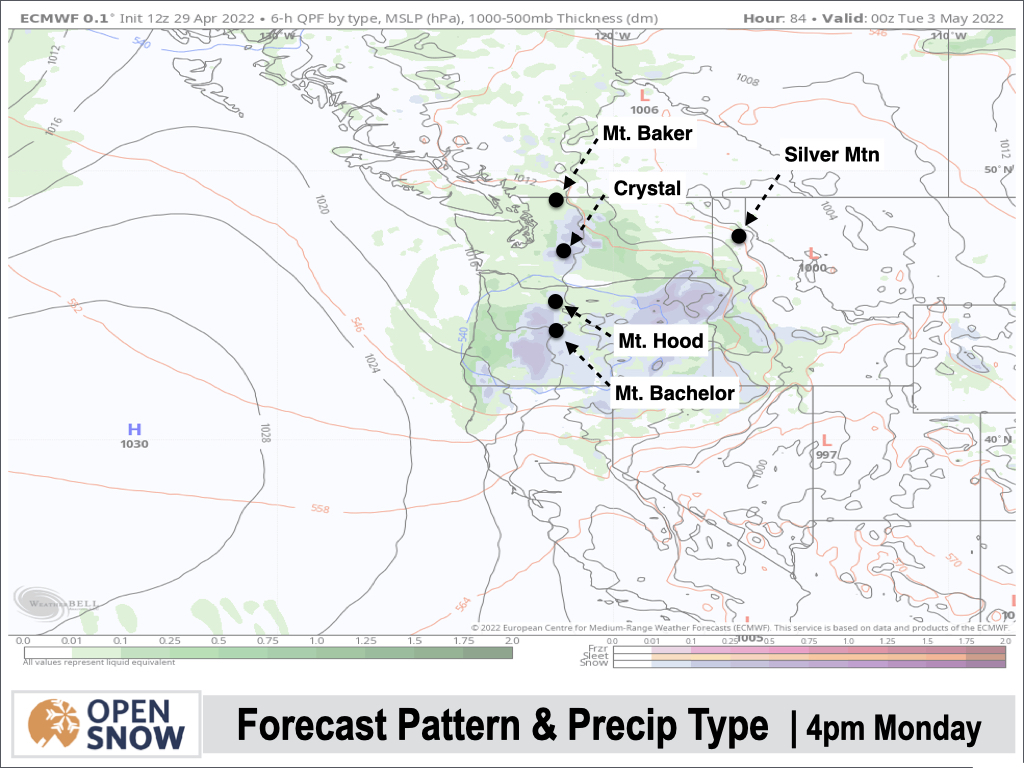 Snow levels will start out a bit high at the onset of the storm, but will quickly fall on Monday morning as a cold front moves through.

The heaviest snow totals are likely to occur across the Central and Southern Oregon Cascades as well as the Northeast Oregon Mountains, so keep an eye on Mt. Bachelor for a possible late season powder day on Monday. 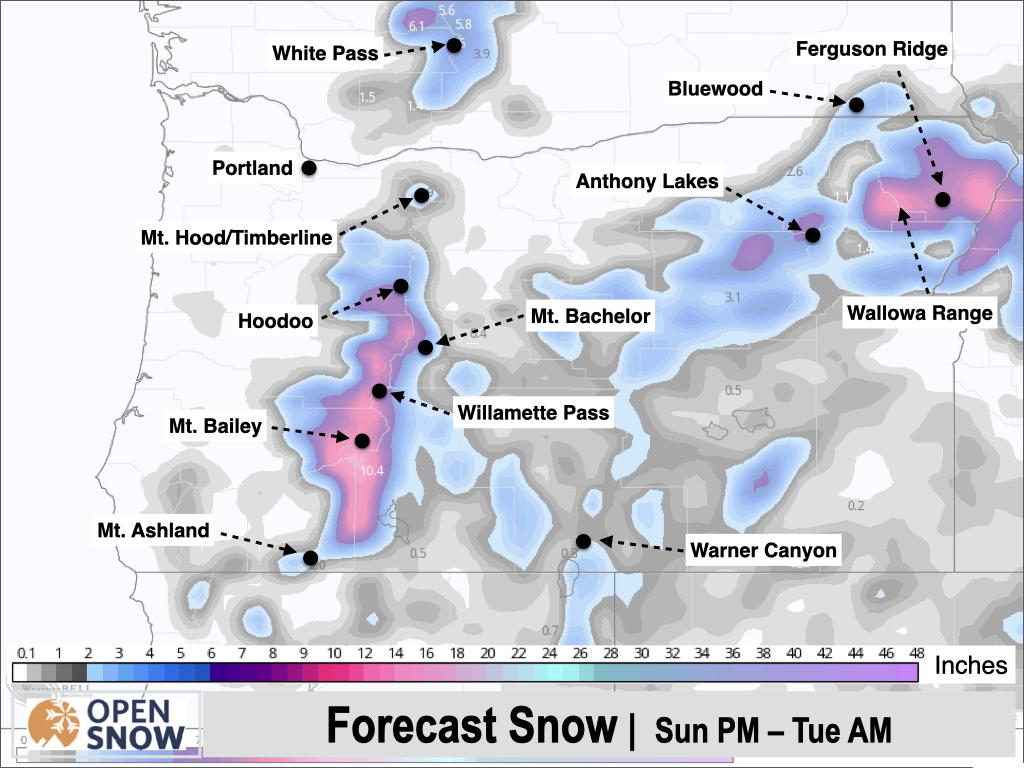 After Monday's storm, we should see a break in the action on Tuesday and Wednesday so get out and enjoy while you can. A more active pattern is then likely to resume around Thursday (5/5) and then we should see more of the same through mid-May with frequent storms and cooler-than-average temperatures favored.

La Nina is expected to persist through the spring and likely even the summer. This year correlates well with past late La Nina seasons including 2008 and 2011 which were both very cool and wet through late spring and early summer. Most long-range models are consistent with projecting this cool/unsettled spring pattern to continue through much of May.

I suspect fire season will be less severe (or at least more delayed) compared to last summer, though if we have a hot mid/late summer that could always change. Even in a warming climate, last year's late June heatwave was such an anomaly that it is unlikely we'll see anything like that this year.

Thanks so much for reading this season and have a great summer!

P.S. Be sure to check out the Western U.S. Daily Summit from May through September for forecast discussions during the warm season across the West.

SKI RESORTS THAT ARE STILL OPEN:

Stevens Pass (open daily through May 1)

Mt. Hood Meadows (weekends only through May 7)

Mt. Bachelor (open daily through May 29)

Crystal Mountain (open Fridays-Sundays through May 30)

Right now, OpenSummit forecasts are only available for U.S. locations but that will soon be changing and Canadian (as well as worldwide forecasts) will become available on OpenSummit by this summer.