Warm conditions expected to close out April. There will be additional chances for mountain snowfall in May, as there always is, but for the most part, our season is over and we are looking toward summer recreation and (hopefully) more normal lifestyles again.

I have been forecasting on a reduced frequency schedule for the past few weeks. There are a couple reasons for this. Firstly, all ski areas have been closed since mid-March and it is looking unlikely that lift-serviced skiing will resume in Utah this season. Secondly, we have really been in a quiet pattern for most of April and that looks to continue -- so there hasn't been the need to put out daily forecasts.

The quiet weather is going to continue this week with temperatures soaring to near-record levels by Wednesday and Thursday. Mid-80s likely in the lower valleys with 60s in the high elevations. The spring thaw will be well underway, even at the highest elevations.  Then, we could see a weak system this weekend into early next week with cooler temps. GFS has moderate amounts for the Wasatch while the Euro shows only a few light showers.

The Story of this Season

As for the 2019-20 season, it was a strange one to say the very least. Even if we discount the unprecedented way it ended, it was an unusual season even from a weather and snow perspective here in Utah. Let's start at the beginning.

The pre-season was fairly typical in Utah. We saw some decent October snowfall that got everybody excited. Then, as so often is the case lately, we saw a very dry start to November that forced some ski resorts to push back their anticipated opening days. Late November was once again our savior as up to five feet of snow fell during the last week of the month. Suddenly, Utah snowpack numbers were above average and they stayed that way thru December as we saw a fairly typical month for most of the state with consistent storms.

After a brief hiatus, we saw a BIG and WARM storm system impact northern Utah in early February. This brought huge water numbers to places like LCC, but also created one of the worst avalanche cycles in many years, leading to are 2.5-day interlodge for residents and guests. If I remember correctly, something like 20 separate avalanches crossed the road in LCC during that time, and the scars of those slides are still visible today if you drive up the canyon. It also gave berth to a Wasatch legend... A man and out-of-state visitor who became a precautionary tale of how not to handle an extended interlodge -- the infamous TC.

Little did we know at the time, but that storm was a turning point in our season. February was quite dry statewide after that, finishing well below normal. March also started dry but became more active as the month progressed, especially in southern Utah as a series of meandering cut-off lows brought copious precipitation to the desert southwest. Unfortunately, this was the time that the COVID-19 pandemic brought life to a screeching halt and Utah's ski season ended abruptly. I will never forget "Black Saturday". My buddies and I had chased powder down to Eagle Point. As we drove home that evening, news poured in that ski resorts were shuttering their lifts. One resort after another. By the time we got back to Salt Lake Valley, only a few ski areas in Utah remained open -- and those only lasted another day or two before they closed as well. It was a surreal experience and one I will never forget.

Of course, winter didn't stop. In fact, we saw a bit of a resurgence in active weather in late March with some really good powder days. Many of us opted to hike for our turns in the backcountry or at resorts that allowed uphill traffic. If I'm being honest, some of my best ski days of the season came after the resort closures.

This season by the numbers:

In short, for most of Northern Utah, this season was really good thru the first week of February. Our snowpack at that point was well above average for almost the entire state. Then, we saw an extended dry pattern and our snowpack numbers fell gradually thru the rest of the season.

Here is the season for Snowbird: 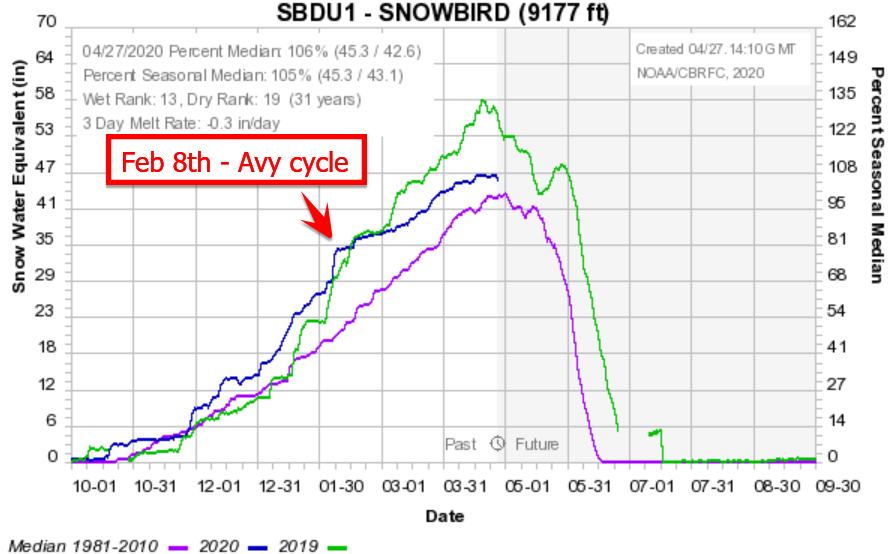 You can see that after the big storm in early February, we were at about 170% of median snowpack and ahead of last year's numbers. Then, we saw a much more gradual increase in snowpack from that point onward. Eventually, falling well behind last year, and regressing closer to the median. Unless we have a really big and cold May storm cycle, I think it's safe to say we have peaked at about 47" of SWE which is about 4" above the median peak. Overall, a slightly above average season in LCC.

When we look at a collection of the Snowbird site and 7 other sites in the Cottonwoods/PC area, we see a similar general trend: 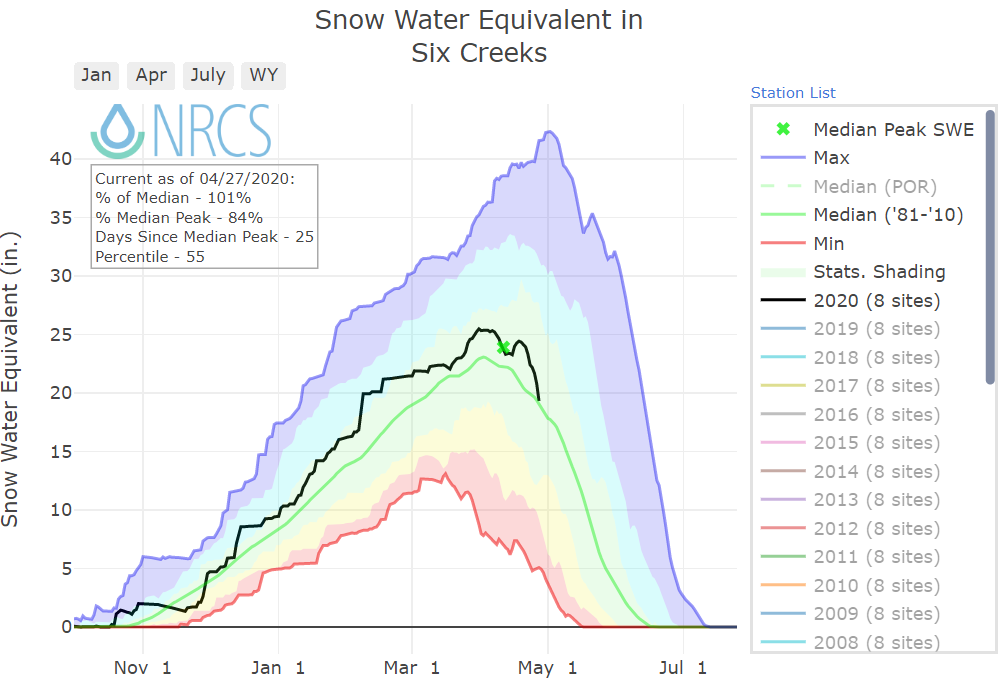 This season (black line) was just above the median (green line).

Farther north, Ben Lomond Peak (near Snowbasin and Powder Mountain) had a worse season than the Cottonwoods: 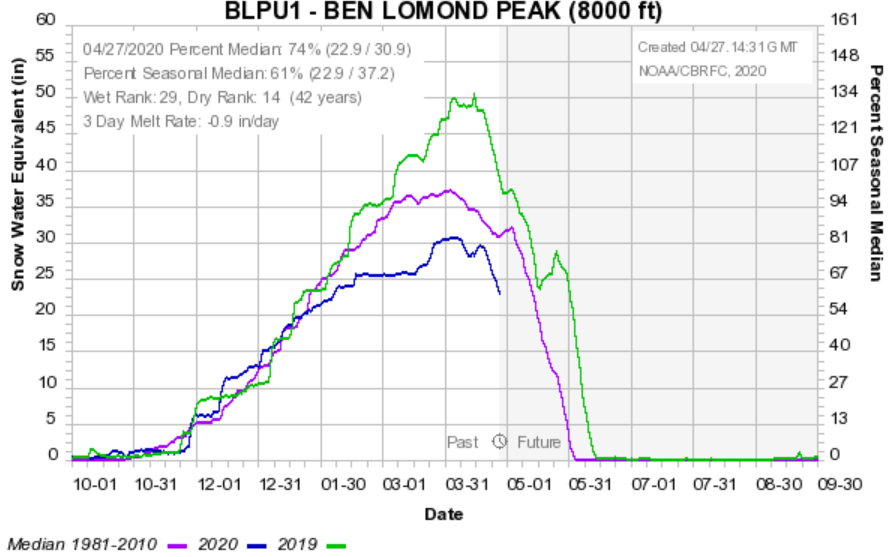 Ben Lomond Peak was not doing as well as some other areas, but was at least staying close to average until the middle of February. Then, that area had a month with almost no snow until mid-March, when winter kicked back into gear a bit. Still, it was too late by then and the snow pack peaked almost 7" of SWE below normal. Not a great season for that area.

Southern Utah was perhaps the strangest. Southern Utah is typically much more "feast or famine" than the Wasatch, but this year was an extreme example. Here is the snotel for Midway Valley (near Brian Head): 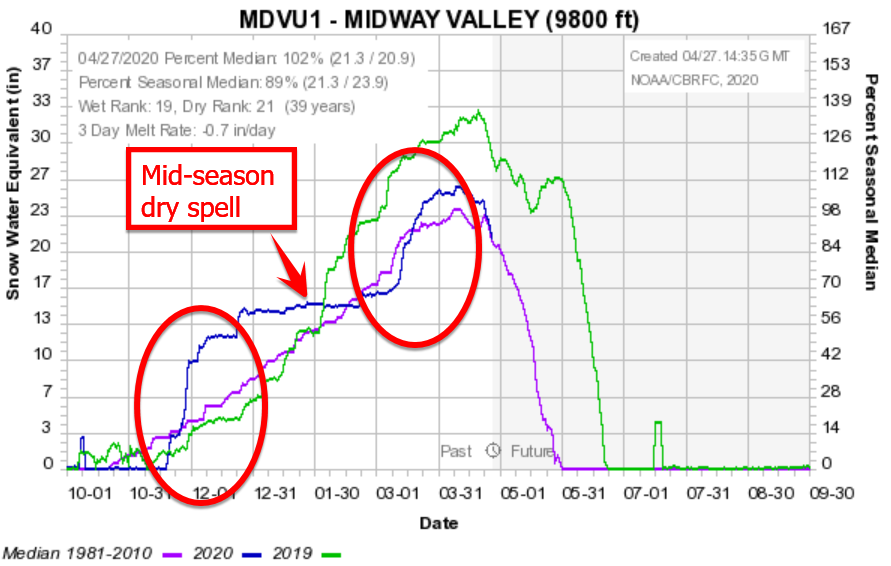 Mid-November thru early December was absolutely bonkers with SO. MUCH. SNOW.  The area had double their normal snowpack by mid-December. Unfortunately, that's when things dried up. Aside from one good storm around Christmas, southern Utah saw very little snowfall at all until the second week of March. Then, they had another bonkers stretch of snowfall. So the season was characterized by one early season and one late season period of very heavy snowfall, with an extremely long period of almost no snow in between.

In the end, Southern Utah finished generally just above average for the season.

Although there are no lift-serviced ski areas in the Uintas, it's a prominent mountain range in the state, so I figured it would be wise to look at a station there as well. It is also home to PC Powder Cats and popular with snowmobilers. Here is the season for Trial Lake in the Western Uintas: 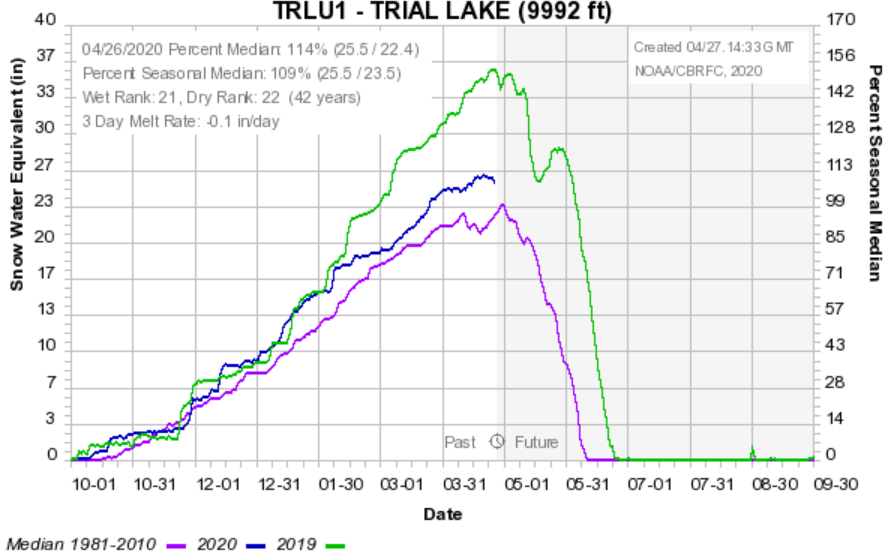 Like other northern Utah locations, Trial Lake was paralleling last year's great season until February. While the snowpack ended up well short of 2019, we still finished above average in much of the Uintas. Good for water supply!

Now that we've tackled several regions, we can put it together and look at the statewide average: 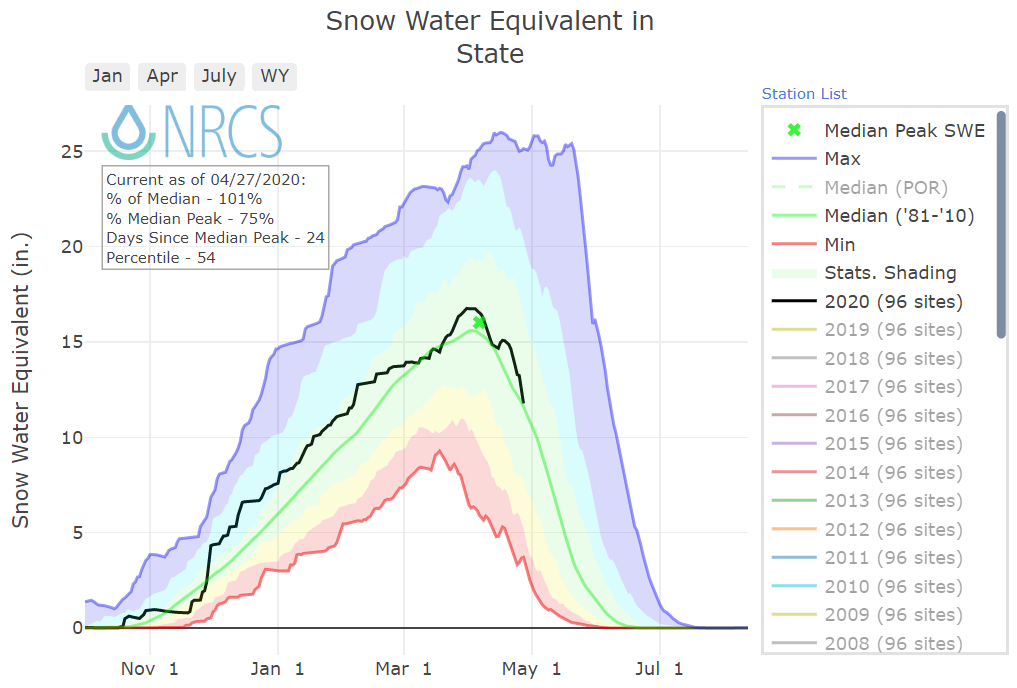 This season (black line) finished just above the median (green line). With the warm and dry weather lately, we've nosedived back down to average. I expect we will fall below average after this week.

In summary, per the numbers, it was an average or maybe just above average season in Utah. However, after the middle of January, we struggled with dry periods or very heavy, dense snow. I went an unusually long time without a good, quality powder day from January 17th thru the middle of March. In all my years in Utah, I don't think I have ever gone that long mid-season without and really great powder day.

Obviously, everybody will have a different perspective on the season. For me personally, on a scale of 1 (worst) to 10 (best), I would say this season was very average, so a 5. If you had asked me to rank it in late January, I would have said an 8. But the period since then has only been a 3 at best.  How would you describe this season?

Thank you so much reading this season, despite the strange circumstances of how it ended. Have a great rest of your spring and summer! Let's hope that next year normal service is resumed and the world will be a little bit more predictable.