A few more days of dry and warm weather before we see change bring snow to Utah. Two potential storms lining up for next week could bring significant mountain snowfall.

Our monotonous weather continues but we are yet another day closer to the end! Hooray!

High pressure will finally release its grip on the west as we head into next week, which means we only have to endure another 4 days or so of this warm and dry weather. Until then, expect a continuation of the same with temps in the 40s on the mountain with mostly sunny skies. In the valleys, haze likely with temps in the 50s during the day.

We will see a weak initial system brush Utah on Sunday bringing a few clouds and maybe slightly cooler temps, but the main system arrives late in the day on Monday. Models remain consistent in this solution. The overall idea remains the same, snow picks up in the Wasatch Monday afternoon and continues overnight before tapering off on Tuesday. The challenge is amounts... The GFS is generally stronger than the Euro and Canadian models currently. However, even within the GFS, the individual ensembles are showing a wide range of solutions. QPF (forecasted precip) ranges from 0.25" all the way up to >2" from this storm. This is the difference between 3-6" of snow and over two feet of snow. Obviously, the most likely scenario is somewhere in between and the ensemble mean has been fairly consistent. Here you can see the latest ensemble mean per the 00z run:

You can see that we see over an inch of liquid in the initial storm, with another system bringing additional liquid later in the week. We'll talk about that later.

The main point I'm trying to make here is that while we are confident in the storm itself, it's a lot harder to be confident in exact totals until we get a bit more consistency.

The good news is that no matter how the first storm plays out, we should have a chance for additional snow later in the week. I spoke about this yesterday, but models continue to portray a second system for later in the week (Thur-Friday). You can see this clearly in the graph above as well as ensemble charts below: 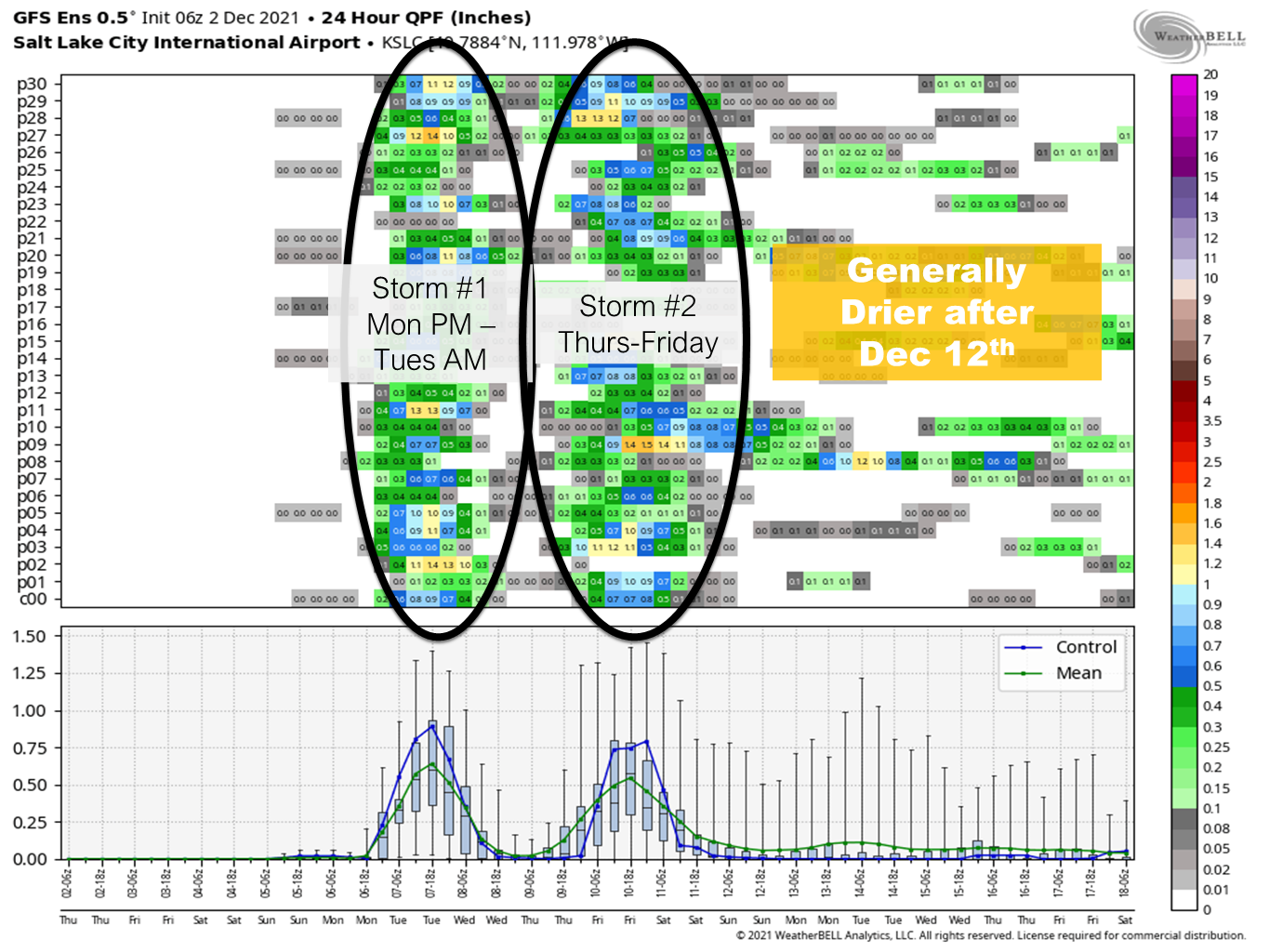 Too early for details, but it is possible that the second system could be as big or bigger than the first. Getting a double dose of snow would be fantastic next week. Here is another view of the latest GFS showing both systems pushing into the region one after the other:

If the above solution were to play out, we'd definitely get a solid kickstart to our season everywhere!

After next weekend (Dec 11-12), it looks like we are generally going to enter a bit quieter pattern as the trough settles more to our west. We could get some scraps but this is typically not a big snow pattern for us. The hope is that this trough then slowly pushes inland after mid-month. No need to worry too much about it just yet as we can enjoy the snow we are going to get next week!

WATCH: The FIFTY - Silver Couloir
Chasing Snow In The Northeast - The Flakes Podcast
WATCH: Reading Your Thank You Notes - The Snow Report Show with Halley O'Brien
We use cookies to better understand website behavior and share relevant information. Learn more in our Privacy Policy.