Happy Fall (autumnal) Equinox. We need some fun things to look forward to and the change in the seasons during the fall always gets me excited with anticipation for what the upcoming storm season could bring!

Looking at the satellite images this morning I get excited looking at the trough in the north Pacific. Even though it won't push south into CA, eventually they will as we go later into the fall season. 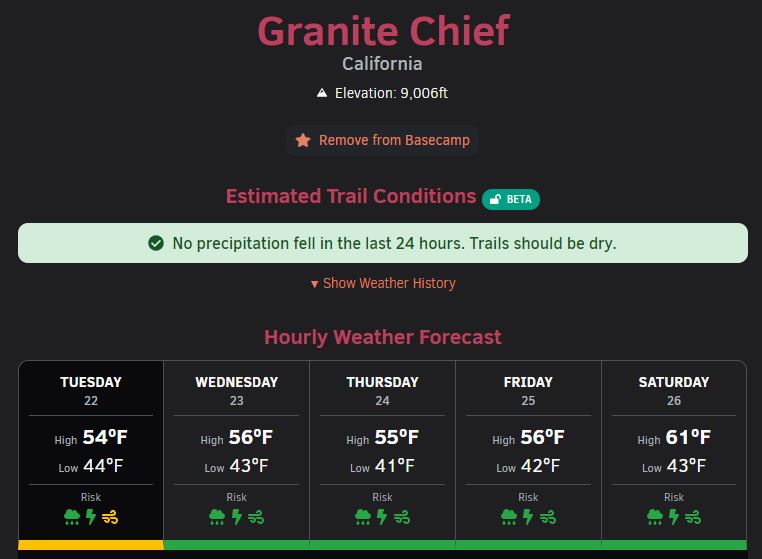 Our main concern over the last 2 months has been the fires and smoke. We have seen a few clearer days around the Tahoe area from weak troughs that have moved through bringing gusty winds from just the right direction to clear us out. The fires currently burning are to our north and south with the worst smoke for those areas, but we are close enough for some light smoke and haze.

The OpenSummit smoke forecast maps show the thickest smoke continuing to our north and south. The west/southwest winds continue through the weak.

The pattern remains dry going into the weekend and next week. A strong area of high pressure is forecast to build over the West. That will bring warmer weather this weekend into next week. Highs back into the 80's at lake level by early next week. 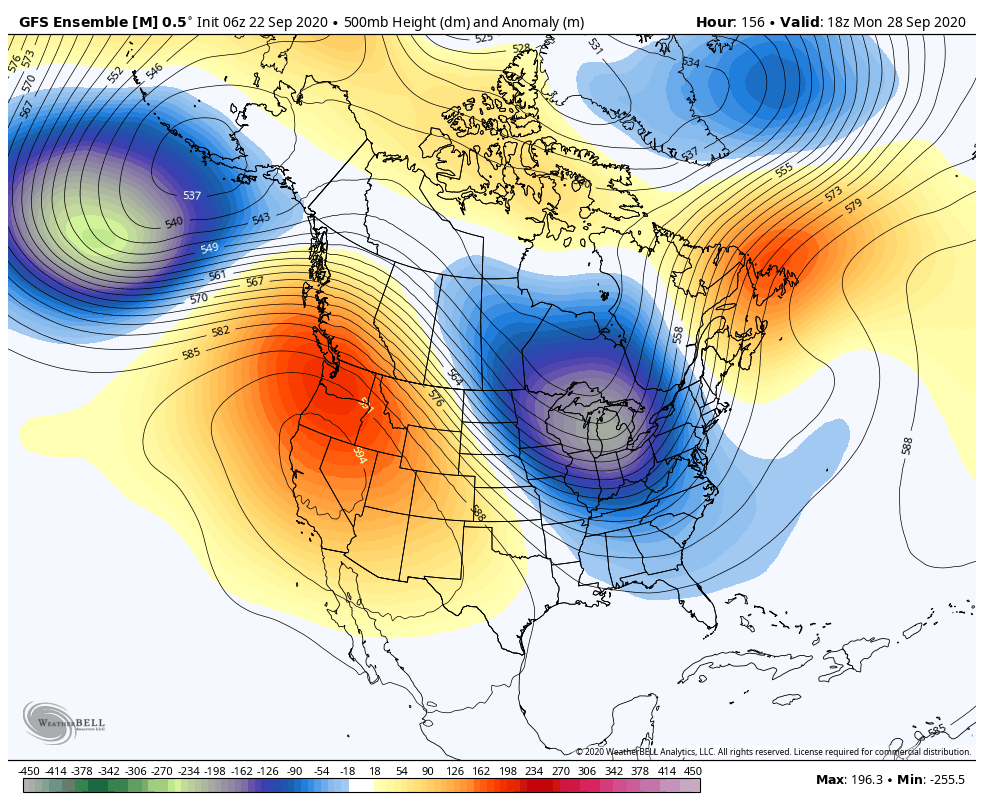 Easterly winds for the weekend may help to bring clearer skies. It may turn out to be a nice summer-like weekend for the first weekend of Fall. The dry weather will keep the fire danger high. But with no lightning in the forecast, any new starts will be from humans, so hopefully people can behave themselves. Here is a look at the 10 day precitpation forecast. 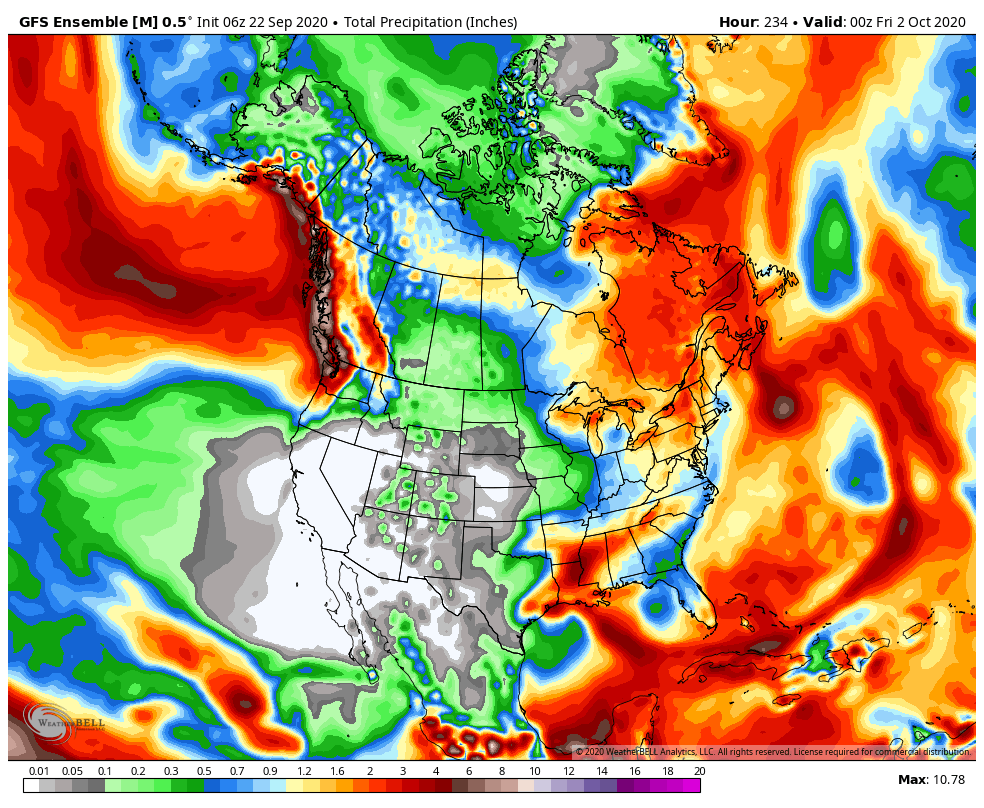 The long-range models show the possibility of a pattern shift around mid-October. We typically start to see some storms later in October. Here is a look at the CFSv2 forecast for above average precipitation in northern CA around mid-October. 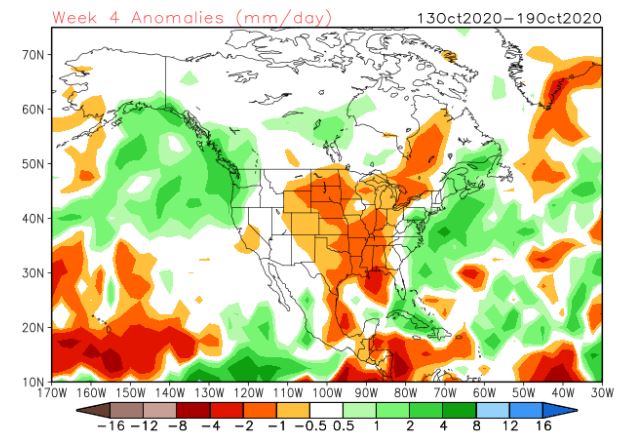 Other models including the European weeklies show the potential shift to a wetter pattern for the Pacific NW into northern CA around mid-October. So we will be watching that closely as we get closer to October. Once we have our first storm within the 10-day window I will start posting more frequently as we head into the Winter season.

We continue to watch the sea surface temperatures as we head through the fall season. Here is the change in temperatures for the past week. 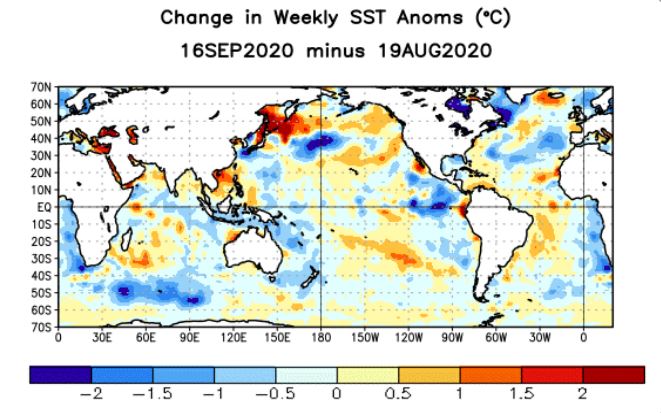 We saw warming along the equator off of South America in the ENSO 1+2 region, slight warming off the CA coast, and some cooling to north or Hawaii. The opposite of what I'd like to see in most regions this week, but the overall SSTs show a weak La Nina pattern setting up with the forecast for a weak/moderate La Nina pattern for the upcoming season.

The JMA forecast for SSTs for the winter shows a pattern I'd like to see with the La Nina, cooler water off the West Coast and warmer water north of Hawaii.

We started to look at different patterns and what they could mean for the upcoming season in the last post. We are hopeful that the pattern for this season will setup just right for an average to above average snowfall season for the Cascades and at least the northern Sierra.

Some ski areas are already announcing potential opening dates in November, weather dependant of course. So we will be watching the weather closely and hoping for on-time openings. We have a lot of skiing & riding to do to catch up from being short-changed last season.

P.S. We have built a lot of great maps this summer on OpenSummit. Most of those maps are being added to OpenSnow for the upcoming season as well as some other really great powdery tracking features we have been working on this summer!

Just a suggestion to sign-up for All-Access for the season now, as most of the new features will be in the subscription section, and prices may go up later this fall.