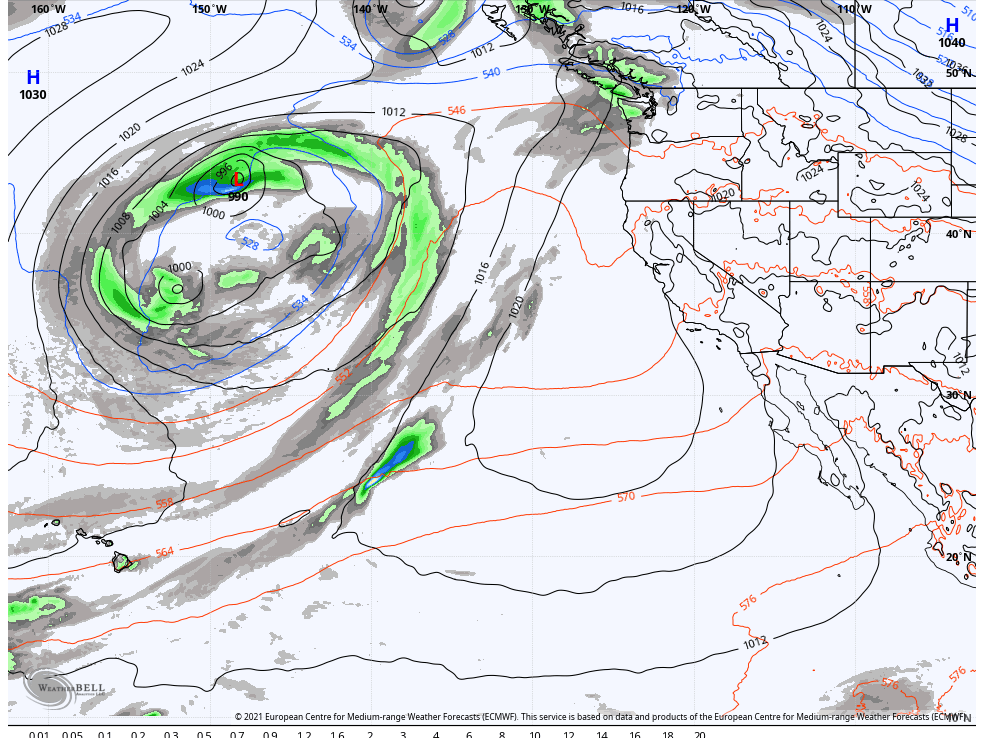 We have a dry pattern through the upcoming weekend. We will cool down Wednesday. Then warm back up slightly Thursday into Friday before cooling down again Saturday. Then warming up again Sunday into early next week. We are tracking a pair of storms later next week that could move into CA.

The forecast through the weekend and likely into early next week is fairly easy to forecast. Dry with a couple of dry cold fronts. Starting next week the forecast becomes quite the headache as we get into meteorological spring. The pattern begins to shift and we start to see more cut-off lows which have a mind of their own when it comes to their track and timing of arrival...

We have a dry cold front moving through today which is bringing in colder air and some gusty winds. Highs today will only be in the 30s. Ridgetop wind will be gusting from the north/northeast 50-60+ mph through this afternoon, with some gusty winds down to lake level. It will be sunny but will feel much cooler than the last 2 days.

High pressure builds back in with mostly sunny skies and highs warming back into the 40s through Friday. Winds could be a bit lighter again Thursday morning but then could pick back up in the afternoon with ridgetop gusts of 40-50+ mph from the west/northwest. Then 30-40+ mph from the west on Friday.

Saturday we have another dry cold front sweeping through from the north. This will bring a shot of colder air again like today (Wednesday). We should see mostly sunny skies again with highs dropping back down into the 30s. Ridgetop winds may only be gusting from the west/northwest 30-40+ mph in the morning and maybe to 50+ mph from the north/northwest in the afternoon.

Yesterday morning it looked like the system dropping down to our east on Saturday may dig a bit to the west and brush us with a dusting of snow. But the latest trend is for the moisture to stay well to our east with just another dry cold front on Saturday. 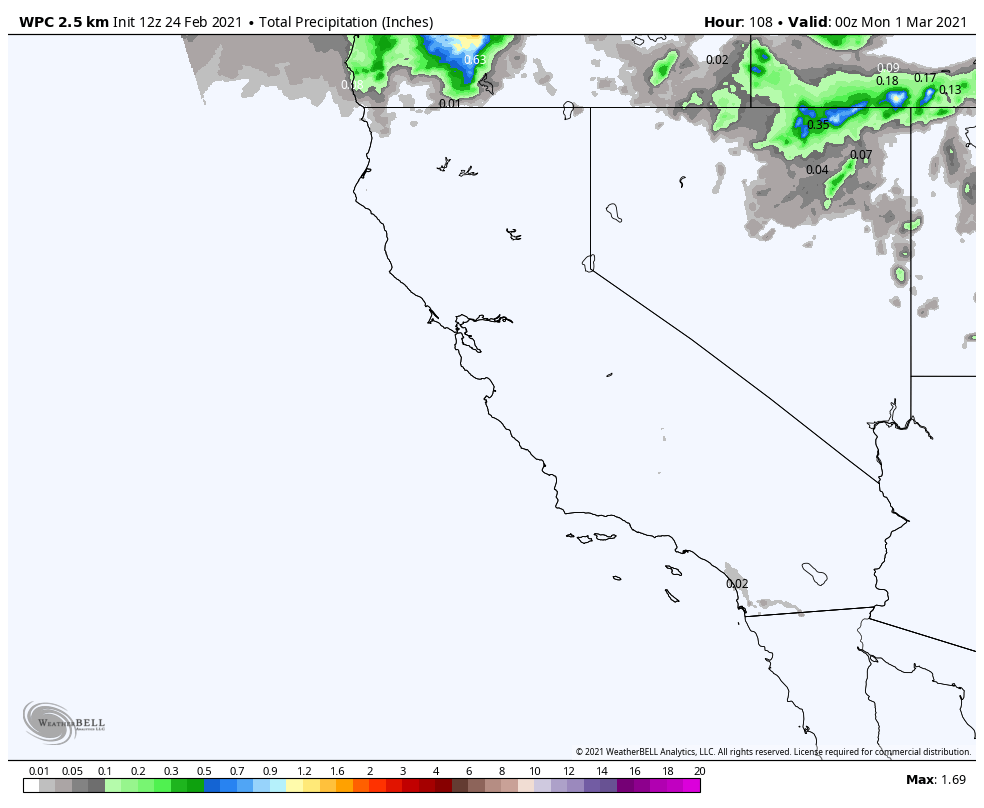 Sunday into Tuesday high pressure builds back in with mostly sunny skies expected to continue. Highs warming back into the 40s. Winds should be lighter starting Sunday.

For the last several days I have been talking about the headaches coming as we try to forecast systems going into March as cut-off low season starts. By Tuesday we have a trough pinching off (get your mind out of the toilet) off of the West Coast. 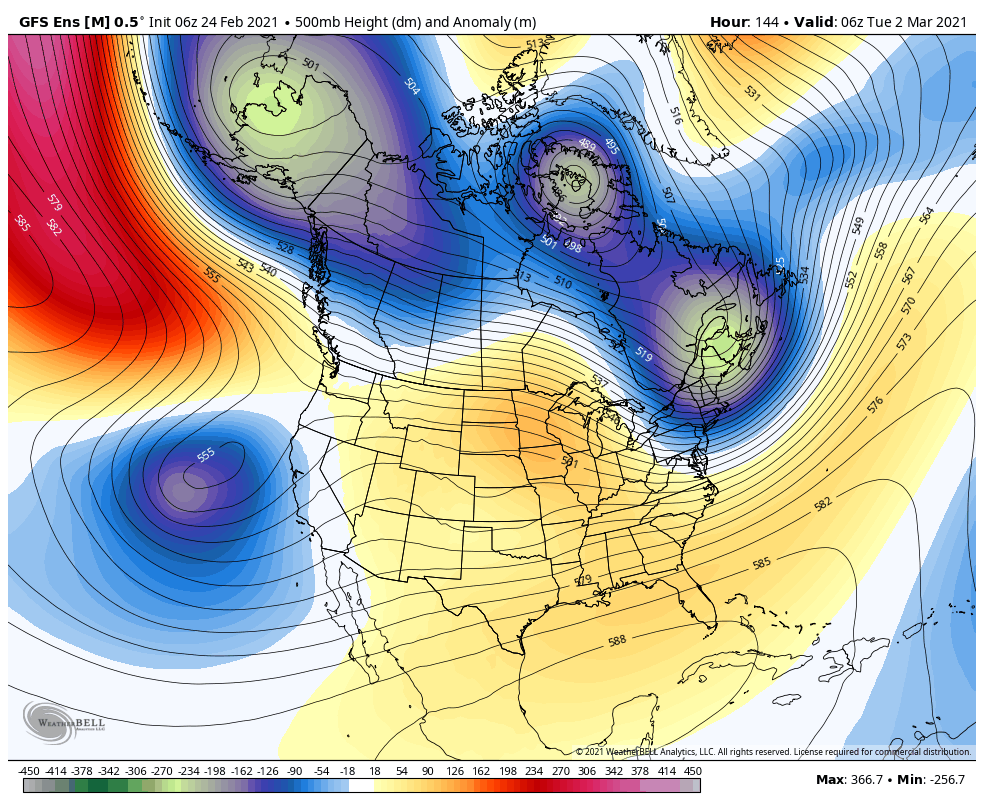 The next system diving into the trough splits and spins up into a closed cut-off low and sits well off of the coast. 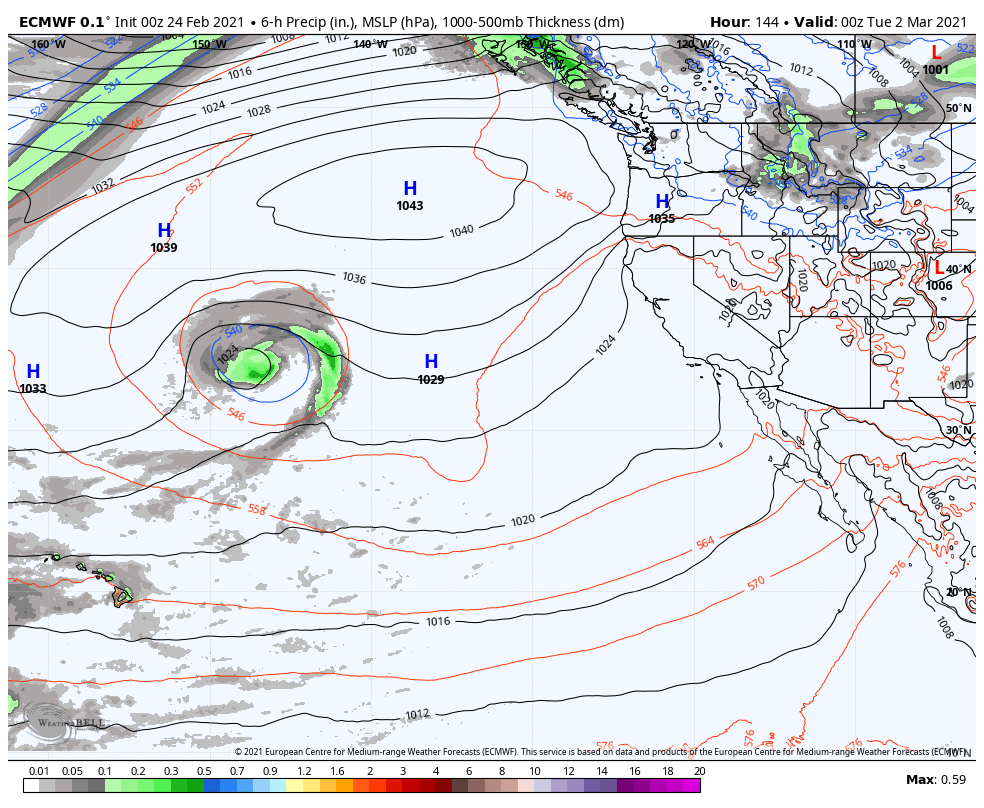 Yesterday morning the GFS & Canadian models still showed the possibility of this system dropping down the CA coast, but most of the models have now trended towards the European model in showing this low stalled well off the coast by Tuesday.

Then the next upstream system begins to split as well with a large closed low spinning up well off the coast next Thu-Fri. It may draw in the remnants from the 1st system. 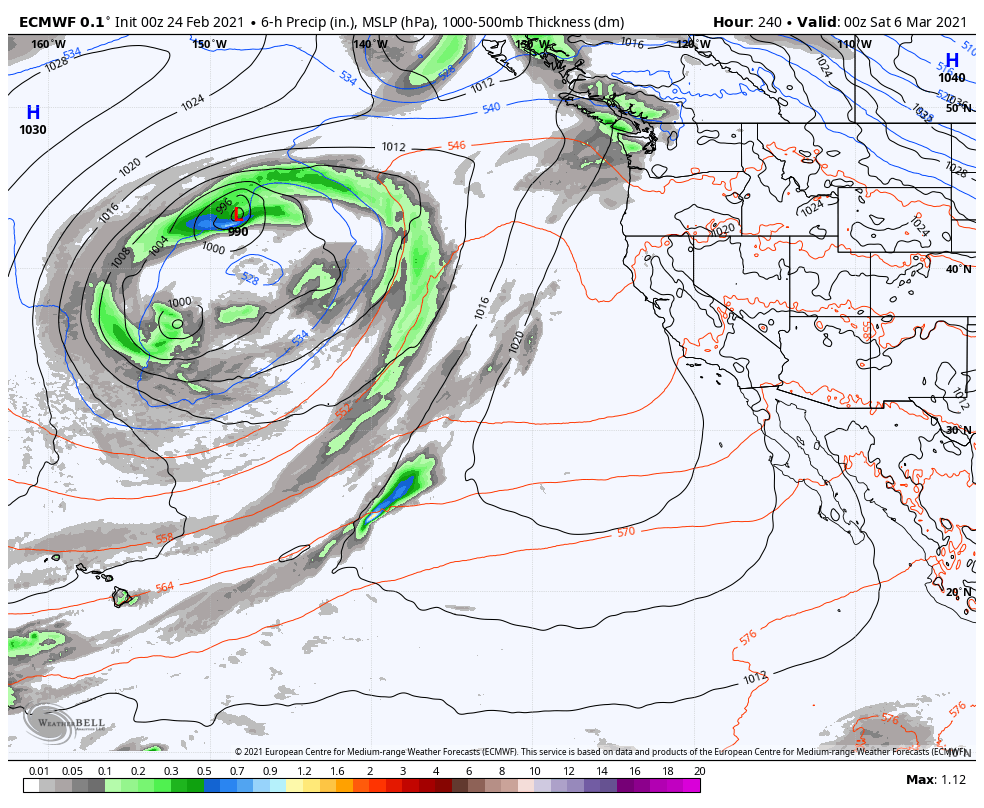 Some model runs like the GFS this morning suggest the 1st system could move into CA by next Wednesday with some light precipitation, but it is the outlier right now. We may have to wait until the weekend of the 5th for the 2nd low to slowly move east into the West Coast to get any precipitation. 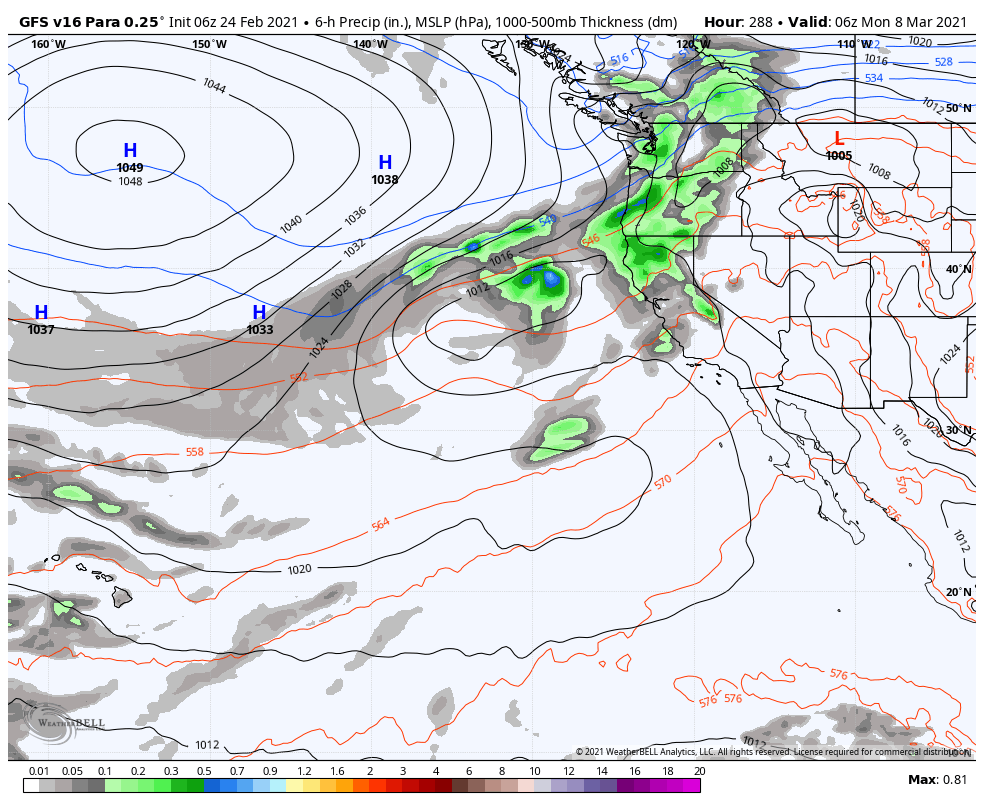 The GFS model is the fastest with pushing in the 2nd system as early as next Friday. The new GFS v16 looks more like the European and Canadian models which are dry through next Friday and bring in the low the weekend of the 5th. Another good test to see if the new GFS is more accurate.

So the headaches with forecasting next week continue. We could still see light precip/snow Wed-Thu from the first system moving inland, and then more rain/snow by Friday into the weekend of the 5th from the 2nd system. Or we could be dry for 10 days through next Friday with the 1st system getting picked up by the 2nd and not moving into the West Coast until at least Saturday the 5th.

The forecasting fun could continue through March. The long-range models continue to suggest lower heights along the West Coast through most of the month.

That could mean a fairly active month with no prolonged dry spells. But we may continue to deal with cut-off lows through the month which is common for March. Hopefully, we will also see some stronger progressive fronts that are easier to forecast. The long-range models show the 2nd half of March as wetter than the 1st half.

Winter is not over yet. Typically we have another 4-6+ weeks where we can see decent storms move through with most ski areas open for another 7-8+ weeks. I think we will see some good storms in March. Let's hope, we have a lot of catching up to do...

The new episode of The Flakes Podcast is out! This week we talk to Evan Thayer about the amazing skiing after Interlodge at Alta, and having respect for ski patrol. Plus we go through the 5-day snowfall reports & forecasts for each ski state!