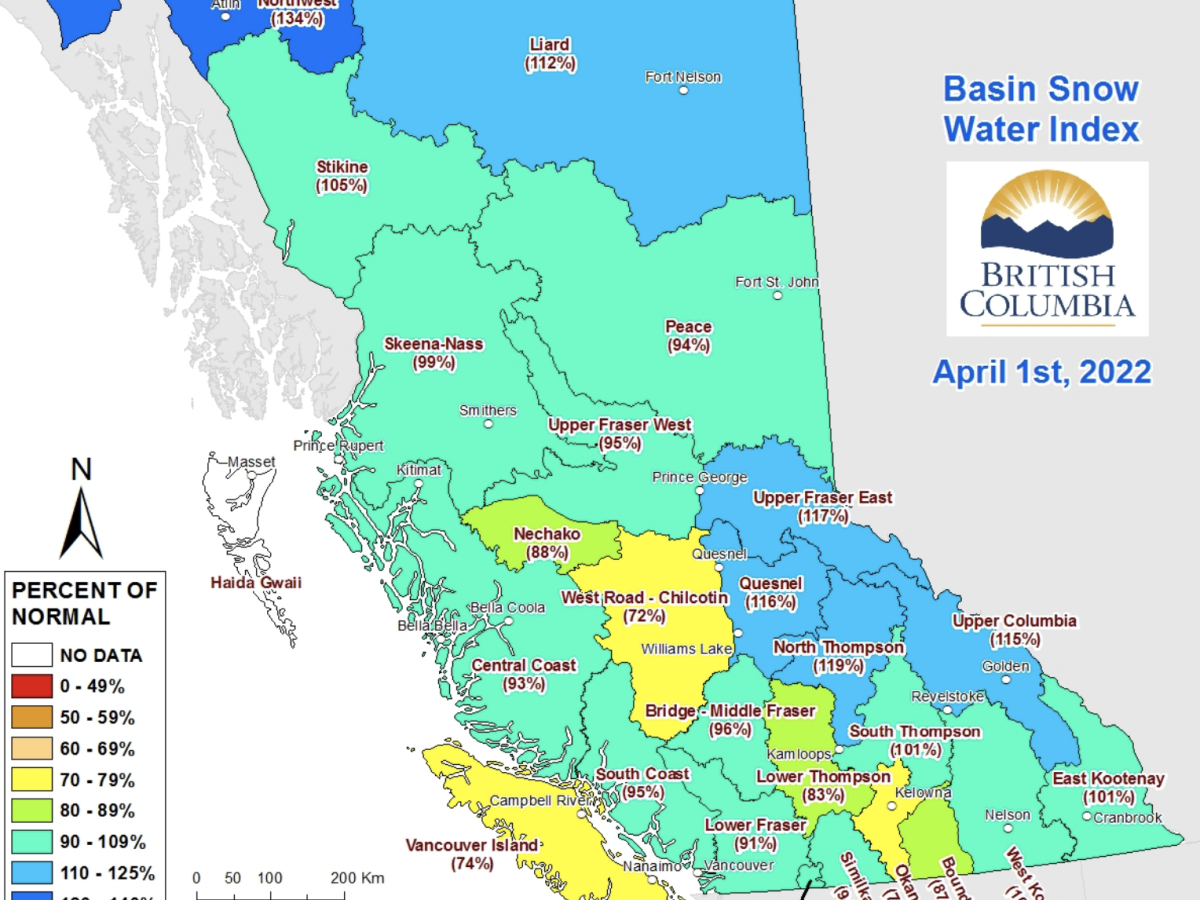 Now that we're in the last week of April and we're in more of a "spring showery" pattern, it seemed like a good time to wrap up the season for BC forecasting. Overall, this was a near-average snow season for BC as a whole with heavier snow around Revelstoke and Rogers Pass and lighter snow across Southeast BC and the Coast Range with Whistler slightly below average.

We're down to two open ski areas, Whistler and Grouse Mountain, who will continue to run their lifts into May. Whistler picked up a nice 22 cm (8") dump on Monday with scattered clouds and a few flurries lingering on Tuesday.

Now seems like as good of a time as any to wrap up the forecasting season and provide a season recap, so let's get to it.

Overall, it was a pretty solid winter across most of BC, though snowfall was variable depending on region and time of year.

Snowpack numbers relative to average were highest across the Northern Columbia Mountains and Cariboo Ranges, and this included Revelstoke which fared the best out of all ski areas this winter.

Snowfall was also most consistent across this region, while areas further south experienced periods of heavy snowfall interspersed with long dry spells (somewhat similar to what the Western U.S. experienced).

This was a La Nina winter, which historically correlates with abundant snowfall across BC. So perhaps it's somewhat disappointing that many areas ended up with near or below average snowfall. But on the plus side, BC had a much better winter than just about anywhere in the U.S., and the preceding fall was also very wet so we are in good shape heading into spring/summer in terms of water supply and drought status.

Below is the map of snowpack relative to average as of April 1st. This map is only published at the beginning of every month, and it should be noted that we have seen a late-season bump in snowpack across most of BC since this time.

Still, April 1st gives a good indication of what occurred during lift served ski season since most areas closed in early to mid-April. 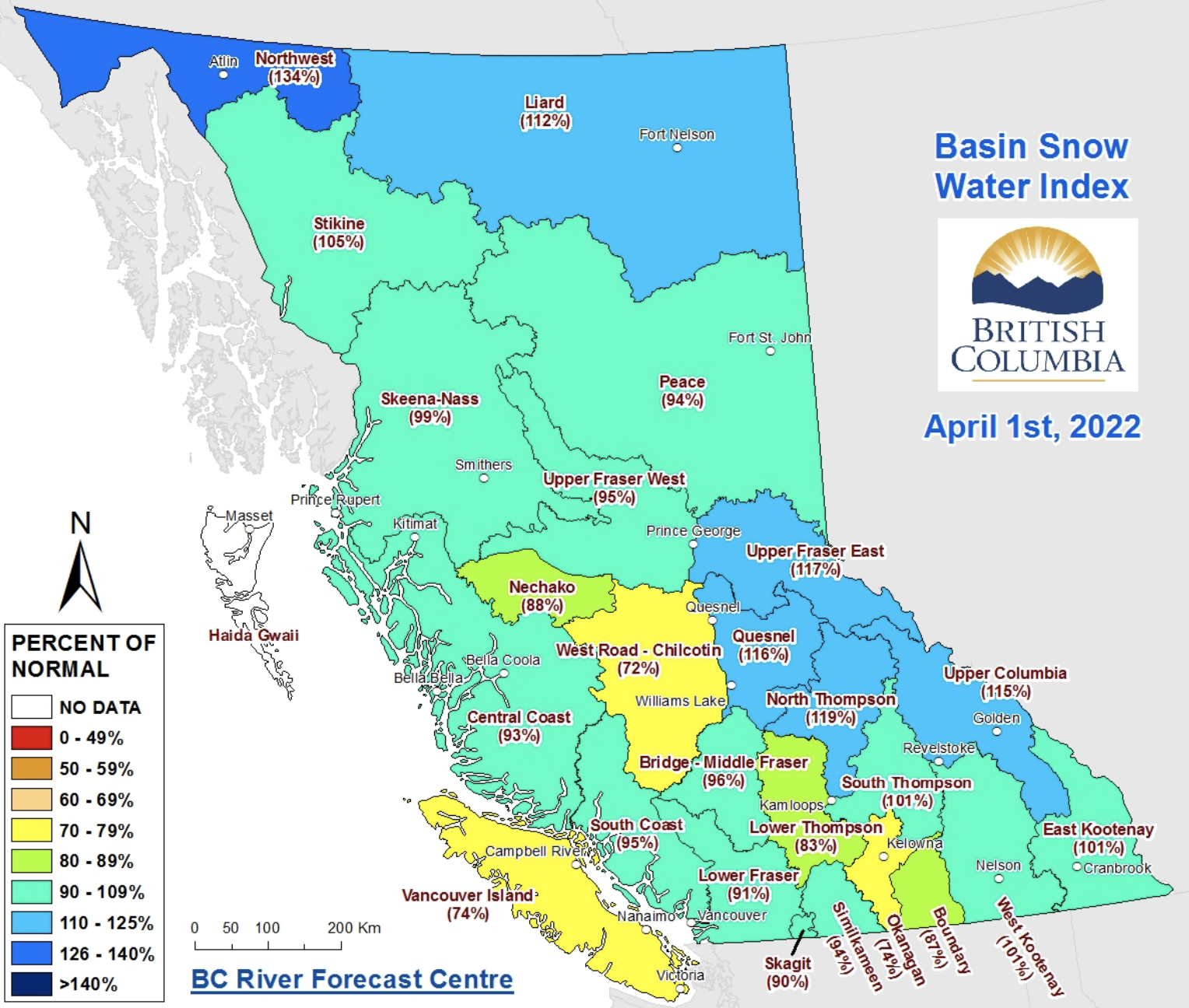 The Upper Columbia Region, which includes Revelstoke, Kicking Horse, and Rogers Pass, had 115% of average snowpack as of April 1st.

However, the longer snowpack history of Mt. Revelstoke National Park shows a similar trend relative to average, and we can also see how consistent snowfall was over the course of the season. Also, notice the bump we've seen in April... Snowpack has peaked later than average, and also later than last year. 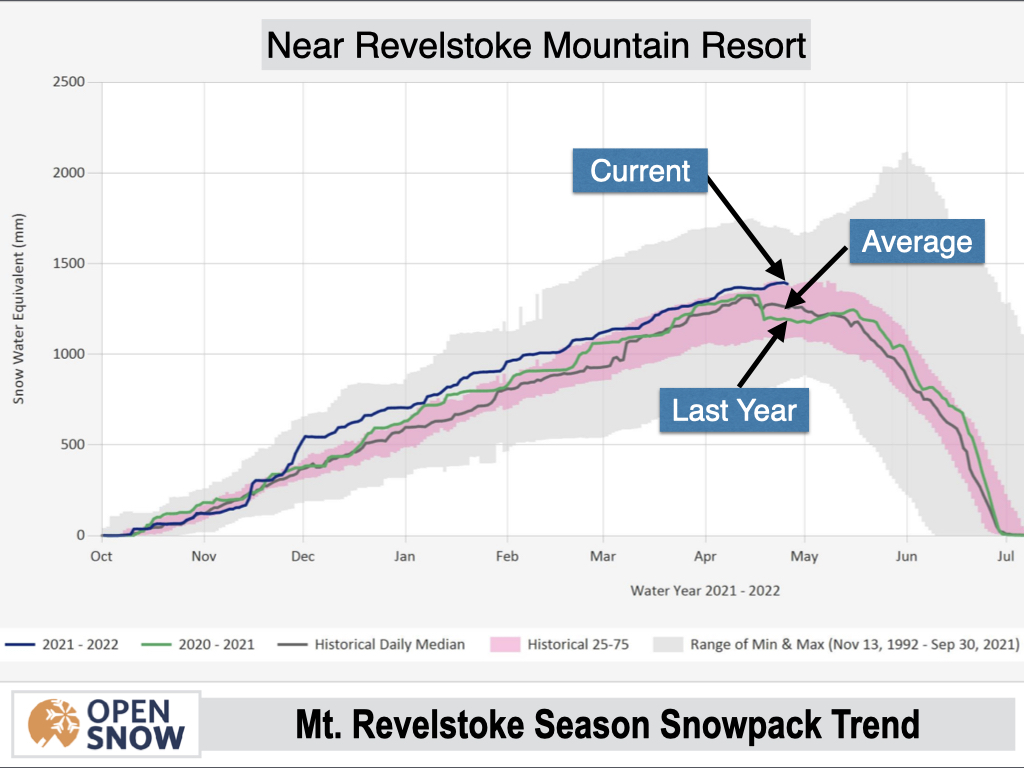 Heading south, April 1st snowpack generally ranged from 83-101% of average across southern portions of the Interior from Big White and Silver Star to Whitewater to Kootenay Pass to Fernie.

April 1st snowpack was 90-100% of average across the Coast Range of BC as well as Northern BC.

Both the Coast Range and the Southern Interior saw a deep start to the season from November through the 2nd week of January, followed by an extremely dry mid-season from mid-January through the end of February. Snowfall was more abundant in March and April but did not entirely make up for the mid-winter deficit.

The graph below from the Upper Squamish snow telemetry station near Whistler illustrates the variable winter pattern well. This year's snowpack is illustrated by the blue line. Notice the mid-winter flat-line in January and February... 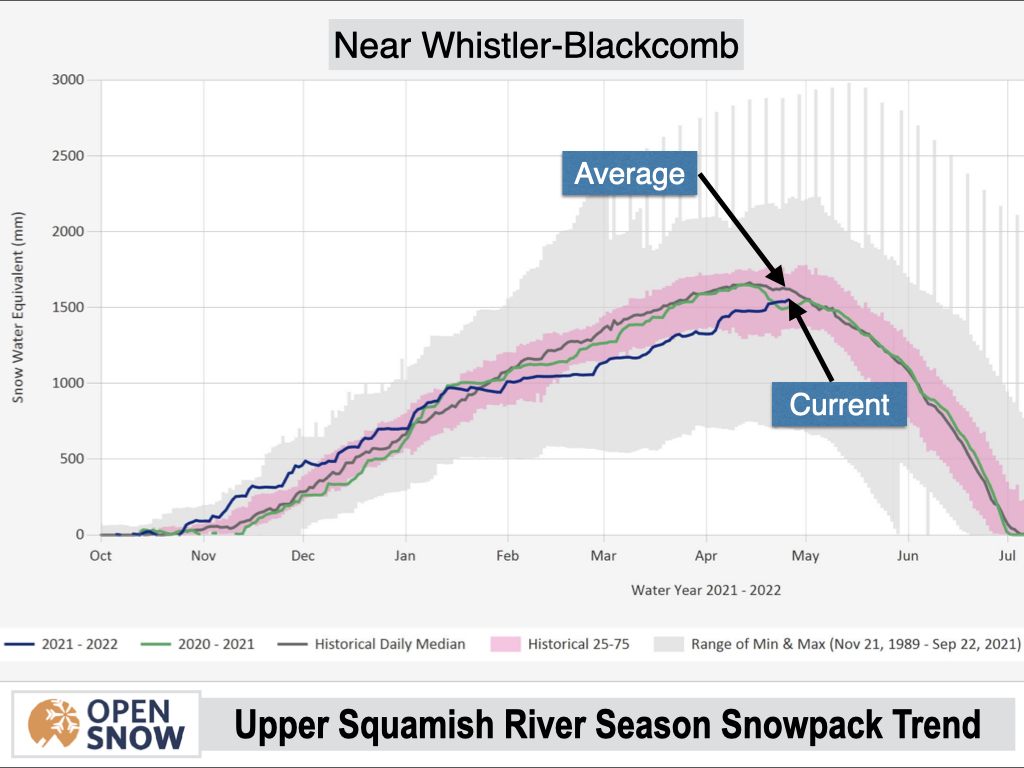 Whistler's season-to-date snowfall as of April 26th is 1084 cm (or 427 inches), which is slightly below the resort's historical average of 1138 cm (448 inches), though admittedly I'm not sure when they stopped measuring snowfall in the past.

Whistler has had an impressive late season, though, and has made a strong comeback in terms of April snowfall. One of the craziest stats of the season is that Whistler received more snow (28 inches) in 24 hours on April 4th than they received during the entire month of February (25 inches)!

The fall season was very wet and active across BC with abundant rain and snow. Historic flooding occurred over Southwest BC in mid to late November and snow levels were high at times early on in the season. However, snowfall and early season snowpack was well above average through November and especially December once much colder temperatures arrived.

By the end of December, snowpack was above average across just about all of BC with the Powder Highway Region experiencing the deepest snowpack (120-140% of average) by January 1st.

The first two weeks of January were very snowy across most of BC, as we picked up right where December left off. Whistler received 234 cm (92") in January, most of which fell early in the month.

Mid to late January trended much drier across the Southern Coast Range and Southern Powder Highway, while Revelstoke continued to pick up more frequent snowfall with a total of 208 cm (82") recorded during the month. Shames Mountain and Powder King also did very well in January as the storm track shifted further north.

By the end of January, snowpack remained above average across nearly all of BC thanks to the heavy snow events from early in the month. Temperatures in January were generally close to average across BC.

February was the driest month of the season across BC as a whole and temperatures were close to average. Periods of high pressure were interspersed with arctic outbreaks, but significant snowfall was lacking for the most part, though the Okanagan resorts and Revelstoke/Rogers Pass did reasonably well all things considering with more consistent periods of light/moderate snow.

We saw a return to more active conditions in March and most areas saw higher snow totals in March compared to February.

It was not a huge snowfall month, but most areas had some nice late season powder days and the middle portion of the month from March 12th-22nd had the most consistent snowfall and best conditions. Temperatures were also close to average in March overall, which was a theme for the season as a whole.

April has turned out to be an impressive month with heavy late season snowfall along with much colder than average temperatures, which has delayed mid to high elevation snowmelt. Many areas have also see snowfall peaking later than usual as well.

According to the BC River Forecast Centre's Bi-Weekly Outlook, province-wide snowpack had increased from 101% on April 1st to 114% on April 22nd.

La Nina is holding on strong late this season and seems to be having more of an impact on spring weather patterns than it did during the middle of the winter. April has been much colder than average with abundant late-season snowfall.

La Nina is expected to persist well into the spring and at least early summer. This year correlates well with past late La Nina seasons including 2008 and 2011 which were both very cool and wet through late spring and early summer. Most long-range models are consistent with projecting this cool/unsettled spring pattern to continue through much of May.

Bottom line, snowmelt may be happening a bit later than normal this year and Revelstoke, Rogers Pass, and the Cariboo Range will likely see the latest melt-out relative to average, as well as the BC/Alberta border where snowpack is also deep this year.

We are in good shape drought-wise, and I suspect fire season will be less severe (or at least more delayed) compared to last summer, though if we have a hot mid/late summer that could always change. Even in a warming climate, last summer's late June heatwave was such an anomaly that it is unlikely we'll see anything like that this year.

Thanks so much for reading this season and have a great summer!

P.S. Be sure to check out the Western U.S. Daily Summit from May through September (despite the name, I will include Western Canada as well) for forecast discussions during the warm season across Western North America.

Right now, OpenSummit forecasts are only available for U.S. locations but that will soon be changing and Canadian (as well as worldwide forecasts) will become available on OpenSummit by this summer.