Snow: 1 to 5 inches of snow from 6000 to 7500 feet including the passes on Interstate 80 and Highway 50. 6 to 9 inches of snow expected above 8000 feet with local amounts approaching a foot over Mount Lassen.

Synopsis: A modest Pacific storm will bring rain and mountain snow to interior NorCal this weekend. The heaviest precipitation is expected late tonight and Sunday morning. Snow levels will be above the trans-Sierra passes until late tonight when snow levels are expected to lower to around 6000 feet.

Take a peek into next week!

87%
of average for the season

Track the snowpack throughout the season

Upgrade to All-Access
Base versus Average

Calculated from 4 SNOTEL sites within 7mi of Boreal at an average elevation of 7,180ft. The data is generated by mountain weather stations near Boreal and is not compiled from official resort measurements. We use weather stations because they update automatically and provide consistent measurements over many decades.

100%
Area Open
33 of 33
Trails Open
8 of 8
Lifts Open
78"
Base Depth
Machine Groomed
OpenSnow does not verify this data. Resorts are responsible for any errors. Report a problem
Snow report provided by SnoCountry

I-80
Snow Saturday Night Into Sunday...
Updated 16 hours ago 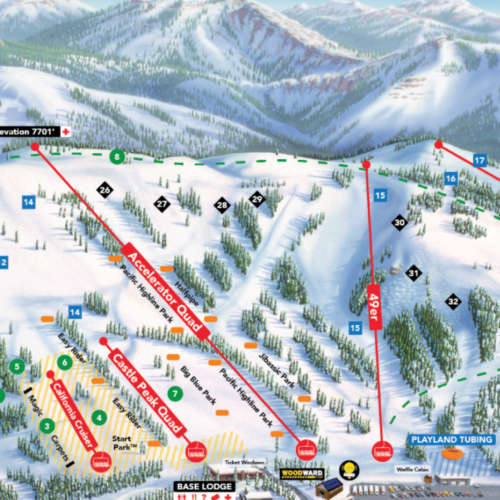