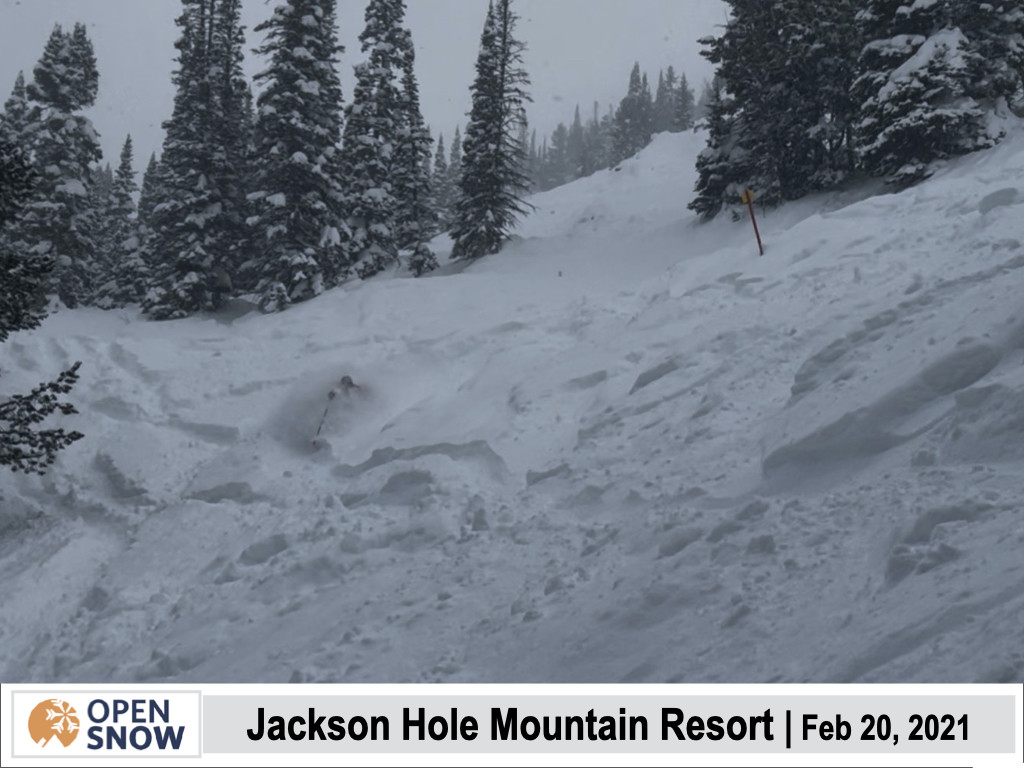 Snowfall at Jackson Hole was above average for the SIXTH season in a row, which is an incredible streak! Really it was a feast-or-famine type winter with a ridiculously snowy 6-week stretch but also some long dry spells. Unlike recent winters, snowpack depth peaked 6 weeks earlier than average this year and our snowpack is about 20% below average heading into spring runoff season.

A cool and unsettled pattern has prevailed during the middle part of the week, but as has often been the case since March 1st, the Tetons are only seeing cloudy skies and light snow showers with minimal accumulations.

The low pressure system responsible for this week's unsettled weather is a cut-off low tracking south of the area – as a result, we are seeing a predominantly easterly flow which means cool air but little moisture.

Easterly winds are unfavorable for Jackson Hole as little moisture is able to make it over the Continental Divide in this flow pattern. 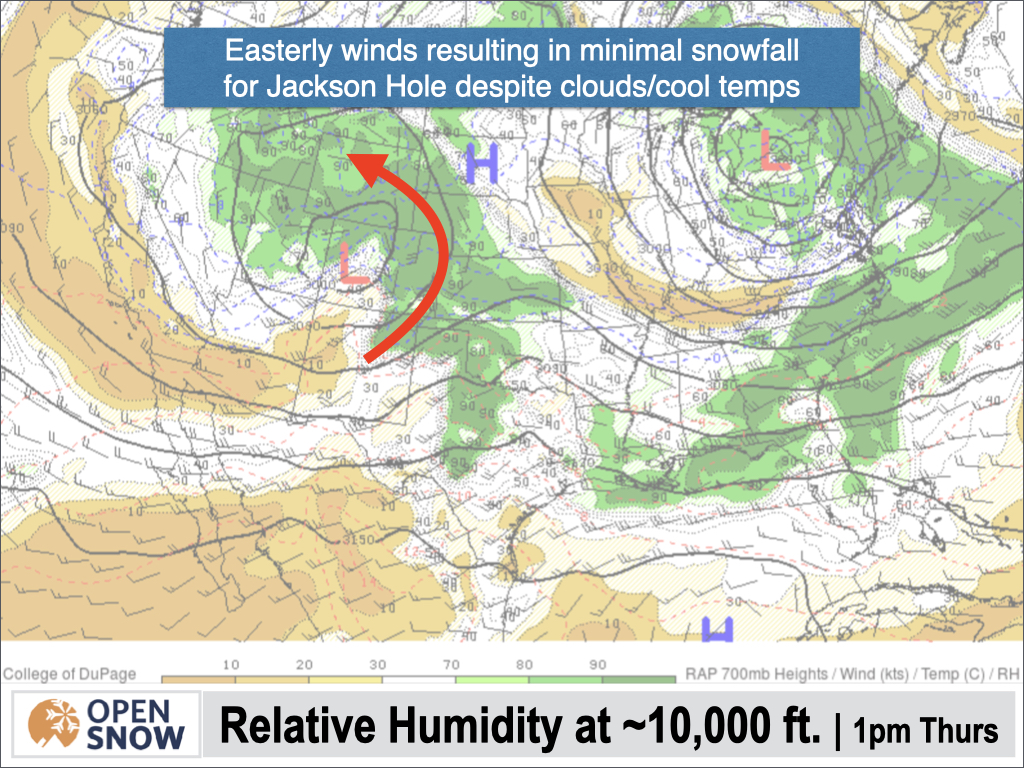 Cool temperatures with occasional snow showers will prevail through Friday, then we'll see nicer weather return this weekend with dry conditions and warmer temperatures. It should be a good weekend for backcountry skiing as there will be hard freezes at all elevations and softening snow under sunny skies in the midday to afternoon hours.

Next week (April 19th-24th), it looks like we'll revert back to an "unsettled" pattern with just enough weak disturbances brushing the area to result in occasional light snow showers but nothing of substance.

That has pretty much been the story of the spring so far – lots of cool/unsettled patterns but no big storms. In fact, it's been so dry that our snowpack has been receding much earlier than usual (more on that in the season recap below).

Here are the projected patterns for the next 10 days (April 15-25th) from the Euro and GFS that show high pressure being the dominant pattern across the West, though as mentioned, we'll see disturbances undercutting the ridge and bringing unsettled weather from time to time. 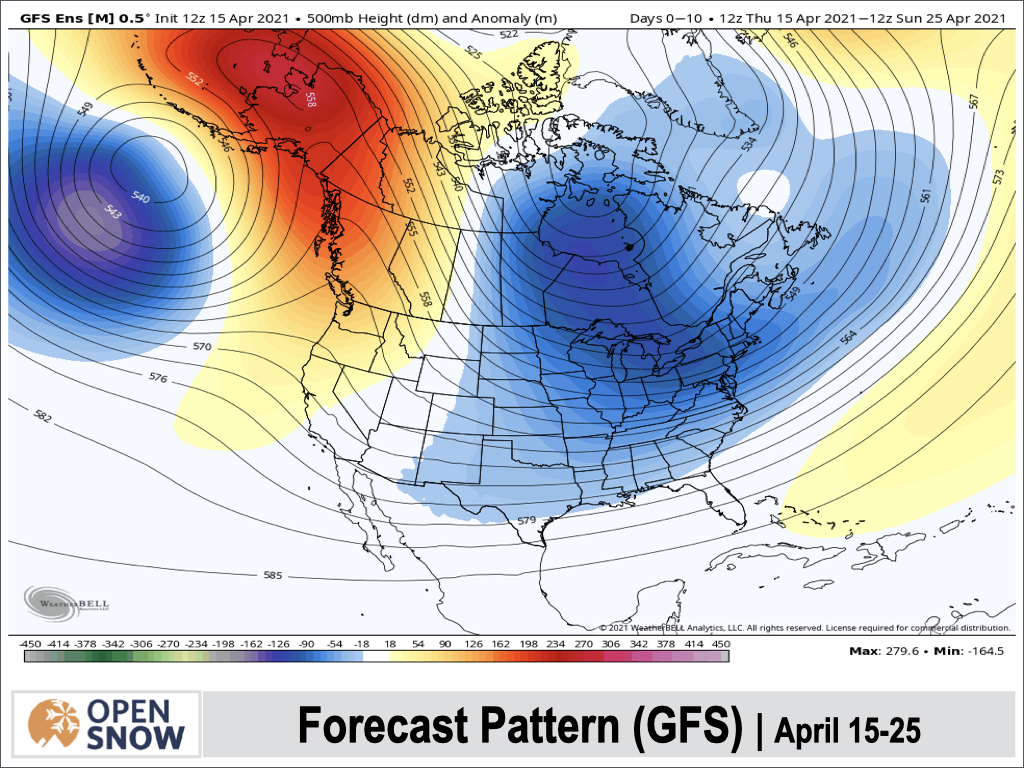 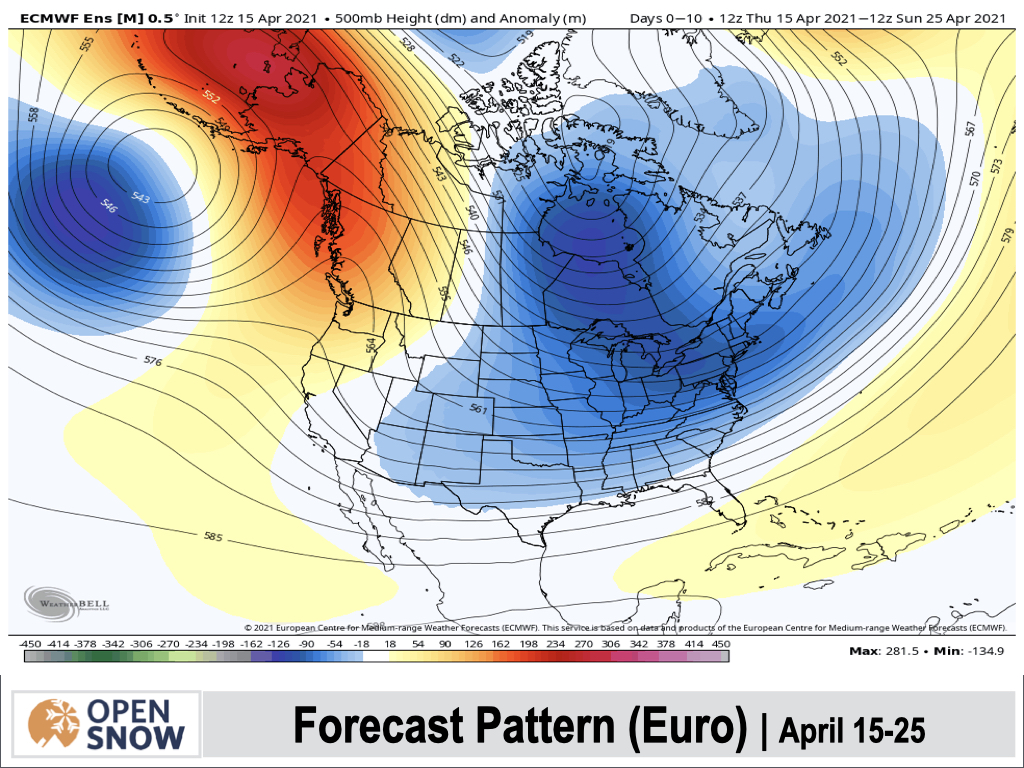 Looking farther out, there are some signs we could see some wetter weather around April 25th/26th and perhaps continuing into the final week of the month. The GFS is the most aggressive with its projection of a more active pattern, while the Euro is less aggressive but still shows the ridge of high pressure flattening a bit. 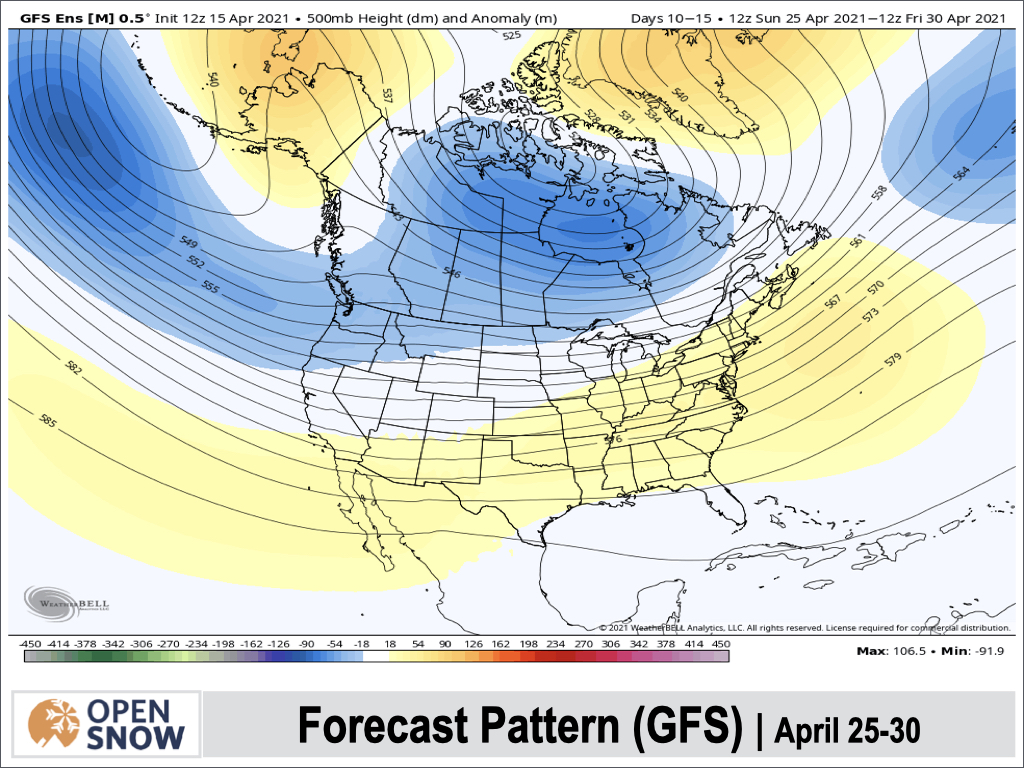 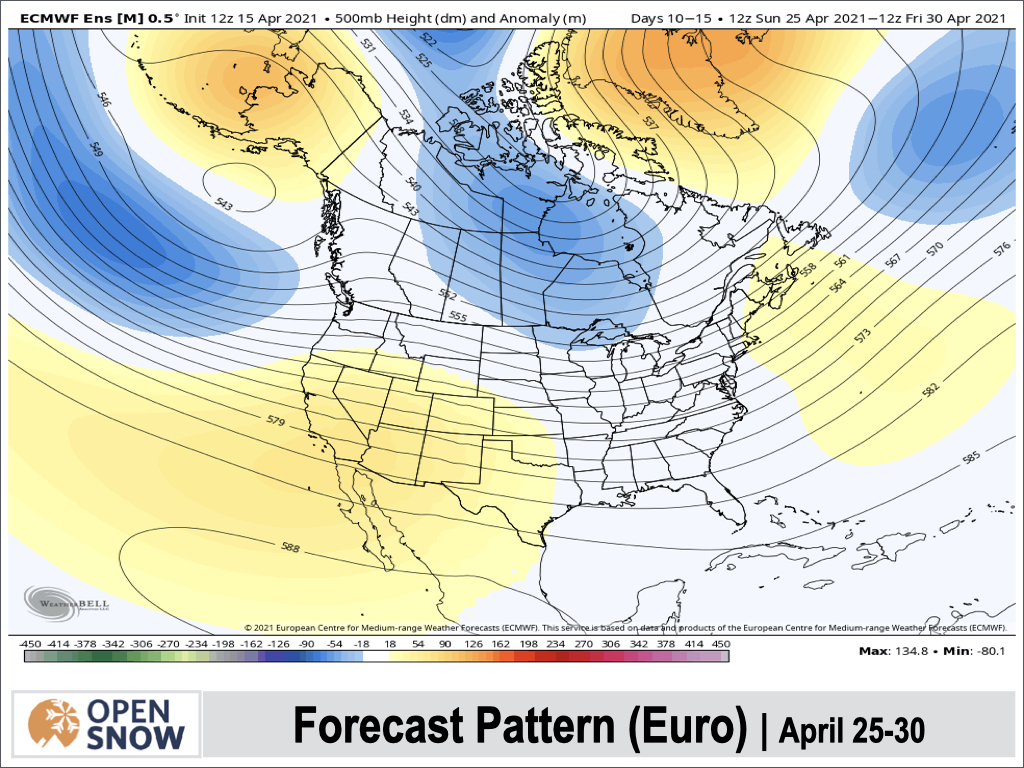 While we're now at the time of year where most of us have spring fever and are longing for warmer/sunnier days, I'm also hoping that we'll see some more impactful systems with significant moisture heading into May and even June before we get into fire season.

This was one of the more interesting winters in recent memory. Overall, snowfall ended up above average for the 6th(!) straight season, but snow was not as consistent compared to previous winters save for an incredible 6-week stretch from late January through the end of February.

The pandemic certainly added some challenges this season as lift lines were much longer than usual (even by Ikon era standards) due to chair loading restrictions. Still, there were many deep powder days especially in February, and it was great to be able to get a full season in after what happened last March.

Major props to all of the Jackson Hole Mountain Resort employees who worked extra hard to keep things running smoothly during this unprecedented challenging season.

Despite having above average snowfall, dry weather in March and April have resulted in an earlier than usual decline in snowpack (i.e. the amount of snow on the ground, or the snow depth).

In fact, our snowpack reached its peak on February 20th, which is about 6 weeks earlier than the average date of April 9th. That's well, not good, but we'll see what happens during our May/early June rainy season.

As of April 15th, snowpack on Jackson Hole's upper mountain is only 78% of average.

Below is a month-by-month breakdown of the winter season. I use snowfall and snowpack data from the Rendezvous Bowl Plot which is located at 9,580 feet on Jackson Hole's upper mountain and has data going back to the winter of 1974-1975. The Bridger-Teton Avalanche Center has an outstanding archive of snow and weather data that is available on their website.

The pattern of extremes can be traced all the way back to Labor Day. That weekend started out with record heat followed by an unseasonable cold blast on Labor Day Monday that resulted in an early season accumulating snowfall all the way down to the valley floor along with damaging winds.

Fortunately, it turned out to be an anomaly and we enjoyed a stellar Indian summer after this event through about the third week of October.

Of course, then we went straight into winter in late October with an extreme early season cold blast that resulted in the coldest October temperature on record in the town of Jackson (-9º F). Snow also fell in late October and managed to stick around across the higher elevations.

During the first week of November, the weather relented back to warmer and drier than average conditions – i.e. one last gasp of Indian Summer. Winter then arrived for real during the second week of November and a 10-day stretch of deep snow followed with 70 inches accumulating in only 10 days.

This mid-November boost came at the right time to set a solid base for opening day. However, during late November, the pattern turned much drier and warmer and by the end of the month snowpack was slightly below average for the date despite monthly snowfall being well above average.

December started out with an extended warm and dry spell over the first two weeks of the month. The pattern become more active over the second half of the month with more frequent moderate snow events and one heavy event.

By the end of the month, snowpack was right around average and skiing conditions had improved nicely after a slow start.

A snowy pattern continued into the first few days of 2021, but then the pattern shut off and remained unseasonably dry heading into mid-January with not great conditions.

However, we saw a big flip toward the end of the month. First, a seemingly weak storm on the 21st-22nd overperformed and brought double digit snowfall totals.

Then, a multi-day storm cycle dropped 41 inches of snow between January 27th-31st, and just like that, conditions were outstanding and January's snowfall ended up being above average.

The pattern change in late January was just a sign of things to come. Although the late January storms arrived from the southwest, most of the storms in February arrived from the west or northwest. Regardless, we went into a relentless pattern right from the start that resulted in deep conditions for nearly the entire month.

The Rendezvous Bowl Plot ended up with 171 inches of snow for the month of February, making it the second snowiest February on record (behind 2019) and the third snowiest of any month on record. Most of the storms also came in with cold temperatures aloft, meaning the snow that fell was extra powdery with low moisture content. 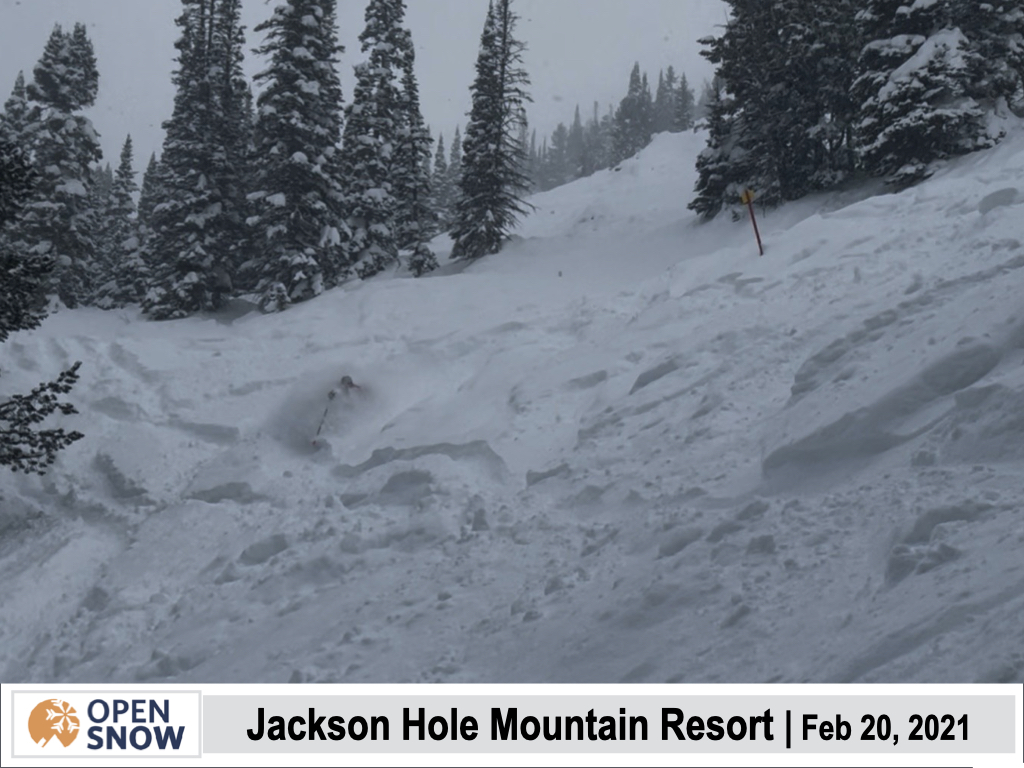 As great as February was, March saw an about-face with an abrupt transition to a dry pattern. There were a few warm spells, but overall temperatures remained a bit cooler than average. Still, the lack of storms and the settling/compaction of the snowpack from February's barrage led to gradually decline snow depths throughout the month.

We did manage a few storms during the third week of March, but overall snowfall was well below average with only 30 inches recorded during the entire month. Snowpack dipped to below average levels by the end of the month despite season snowfall approaching 500 inches.

So far, the Rendezvous Bowl Plot has only recorded 4 inches of snow through the first half of April. Average snowfall for the month as a whole is 62 inches, so we are likely headed toward another well below average month, similar to March. 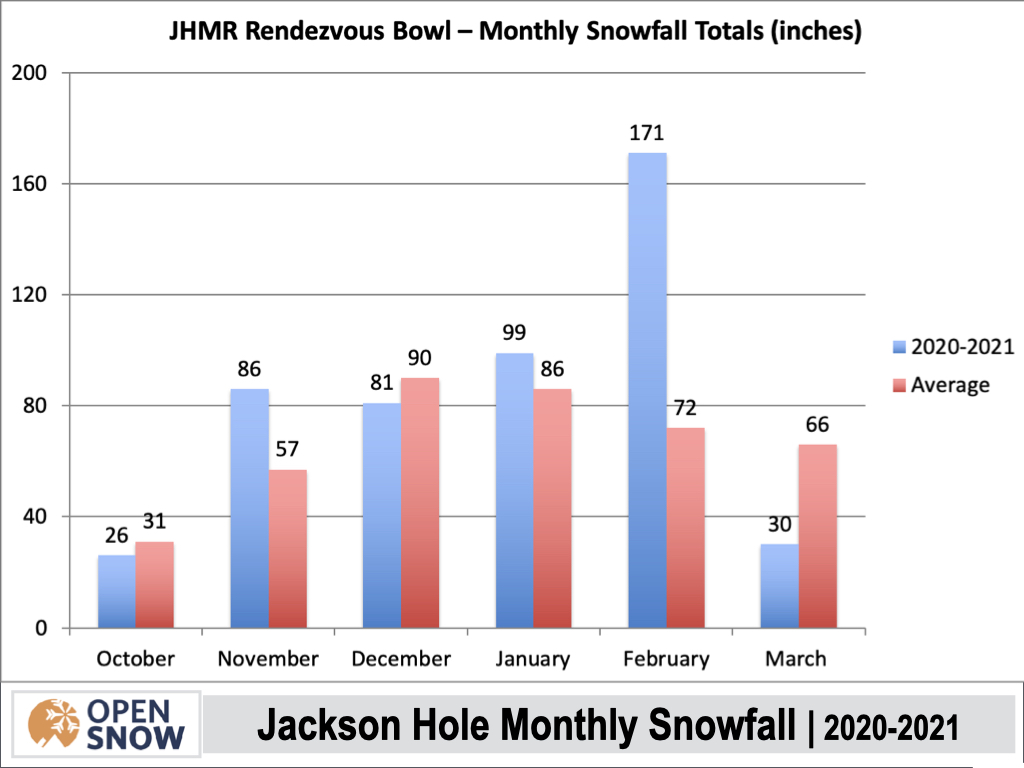 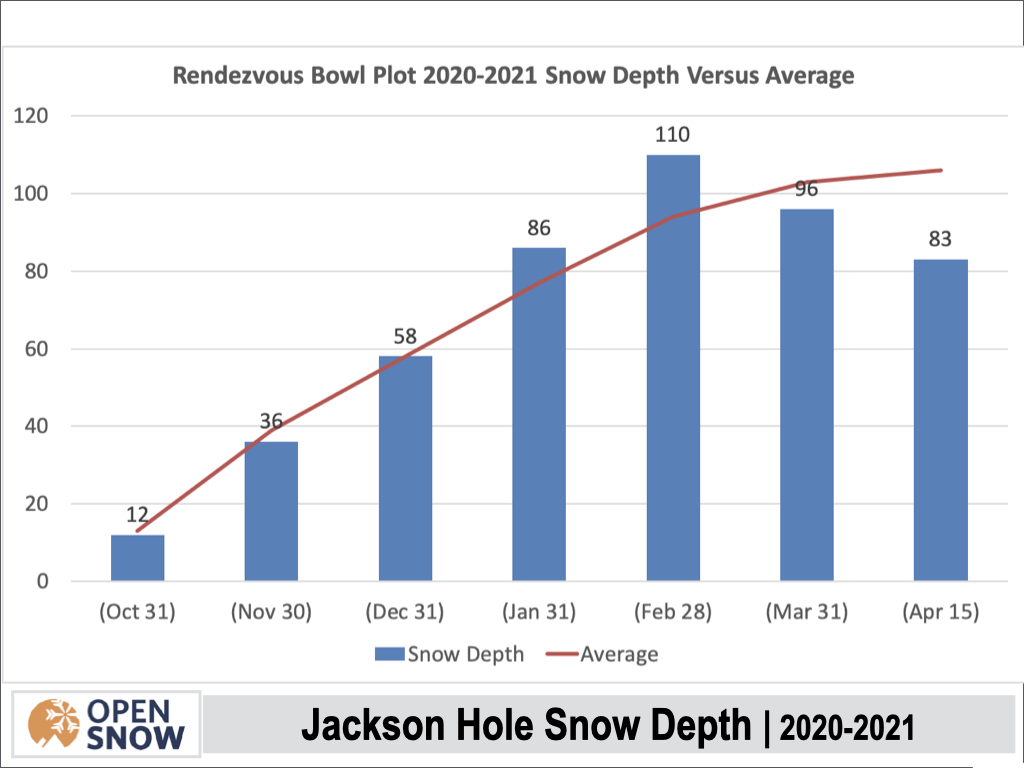 While we are super fortunate to have such great historical data from the Bridger-Teton Avalanche Center, the OpenSnow season snowpack trend also did a good job of capturing the snowpack relative to average over the course of the season.

OpenSnow's model uses data from several nearby SNOTEL stations locations to calculate an average for this location, and is available for all other Western U.S. ski resorts as well.

The only major difference I notice is the peak in snowpack in late March, compared to the Rendezvous Bowl Plot which peaked in late February. Regardless, the fast dip that has occurred in April is quite noticeable on this graph as well. 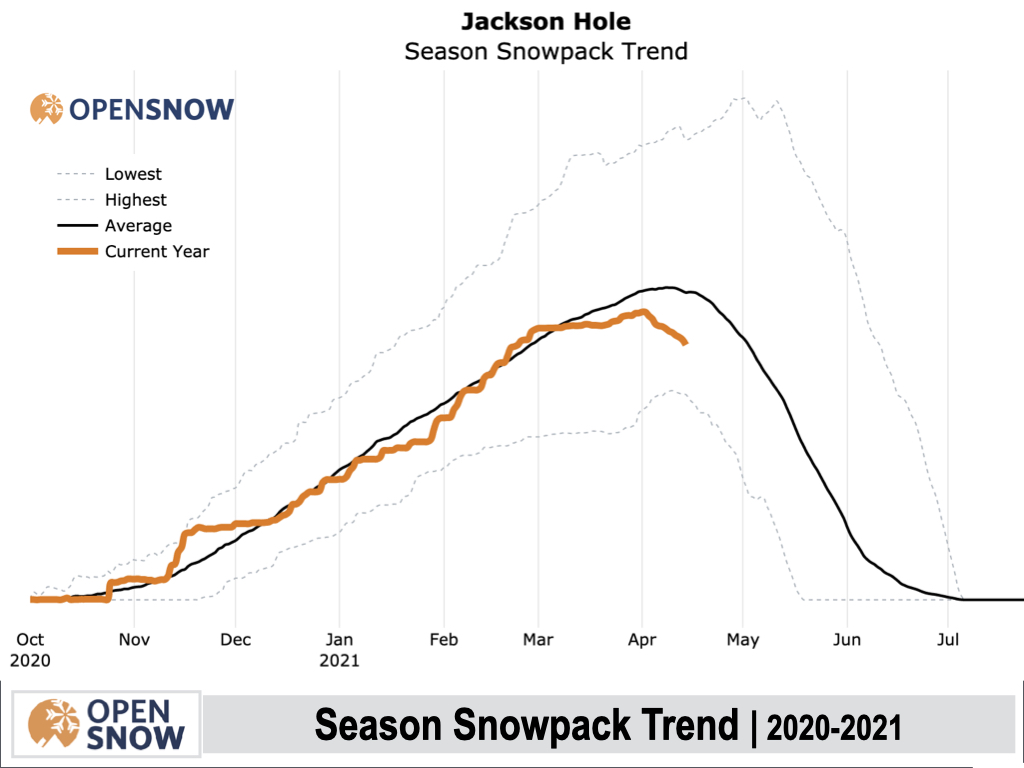 Finally, I wanted to throw in a chart that shows monthly and seasonal snowfall totals over the past 15 years for comparison's sake.

As noted earlier, this was the 6th year in a row with above-average snowfall, which is a crazy run. The last time we had a below average snowfall season was in 2014-2015.

Also, the past several December's have been less snowy than average, even though historically, December is Jackson Hole's snowiest month.

Thanks so much for reading this winter and I hope you all have a great summer!

See you in November!

P.S. Be sure to check out our summer weather forecasting service, OpenSummit.

Plan your next adventure with expert-level weather data that’s easy to use. 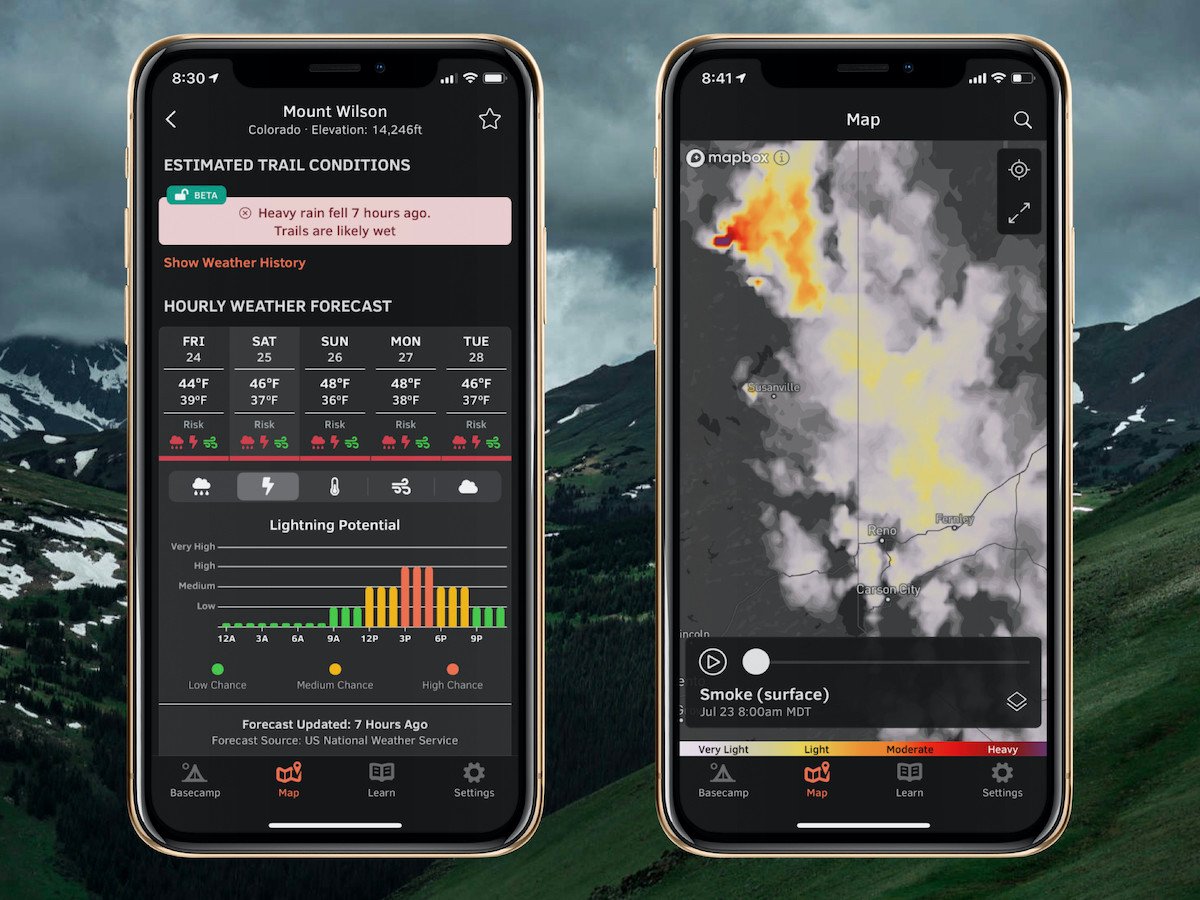