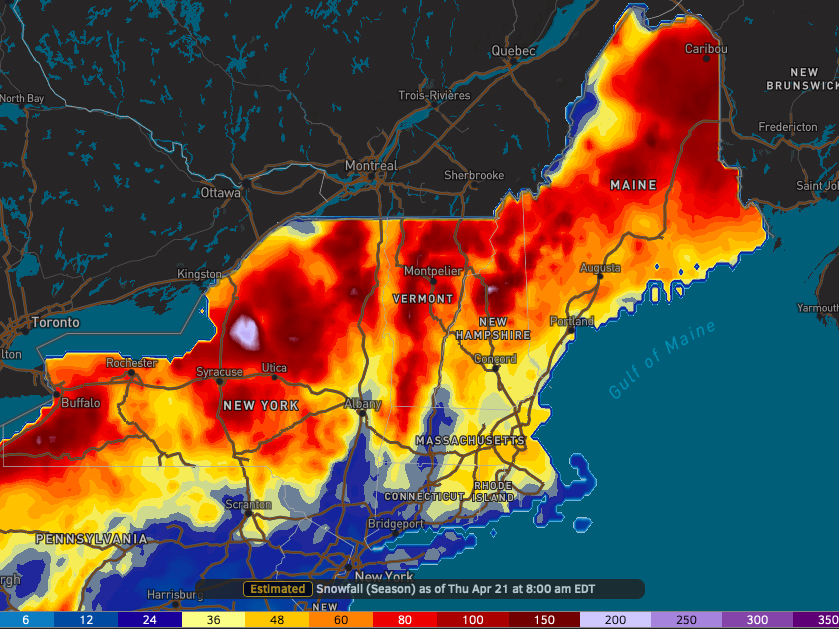 Thank you all for a great season. The New England Daily Snow wraps for Winter 21-22 with a recap of the booms and busts and tallies the season snowfall totals. Be sure to check our forecast pages if any additional flakes fly this Spring. Until November, think snow! 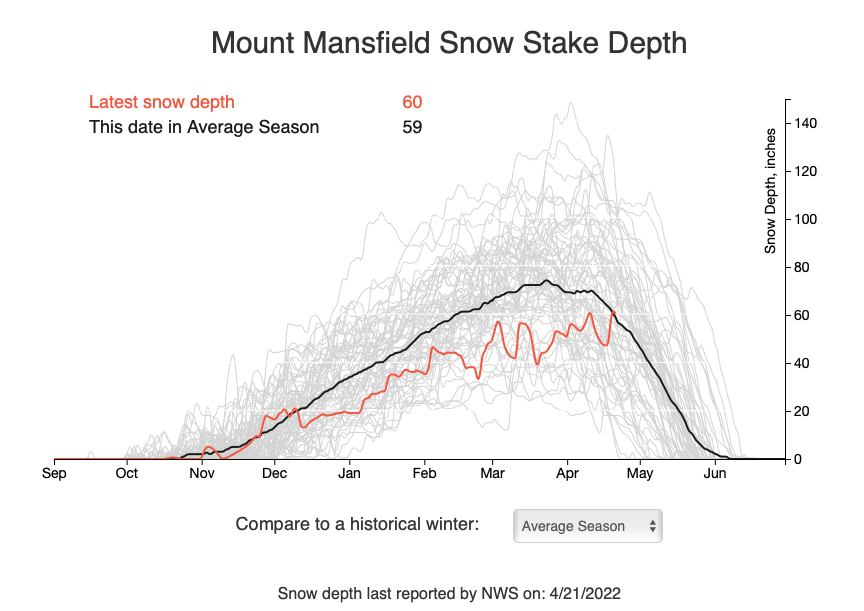 It's that time of the year where we close out the New England Daily Snow with a season recap. Somehow after what has seemed at times to be a mediocre season we end up almost exactly at average/normal in the high peaks in the Greens here at the end of April. In Vermont at least, the Mt. Mansfield snow stake chart above shows the normal ramp into winter through early December with a pretty uneventful stretch into 2022. Snow increased incrementally through January into February following the same pace as the average season, but sputtered out in February and March with series of mid-winter thaws and storms. And just when we thought the season was over in mid-March we managed a few more storms through mid-April. 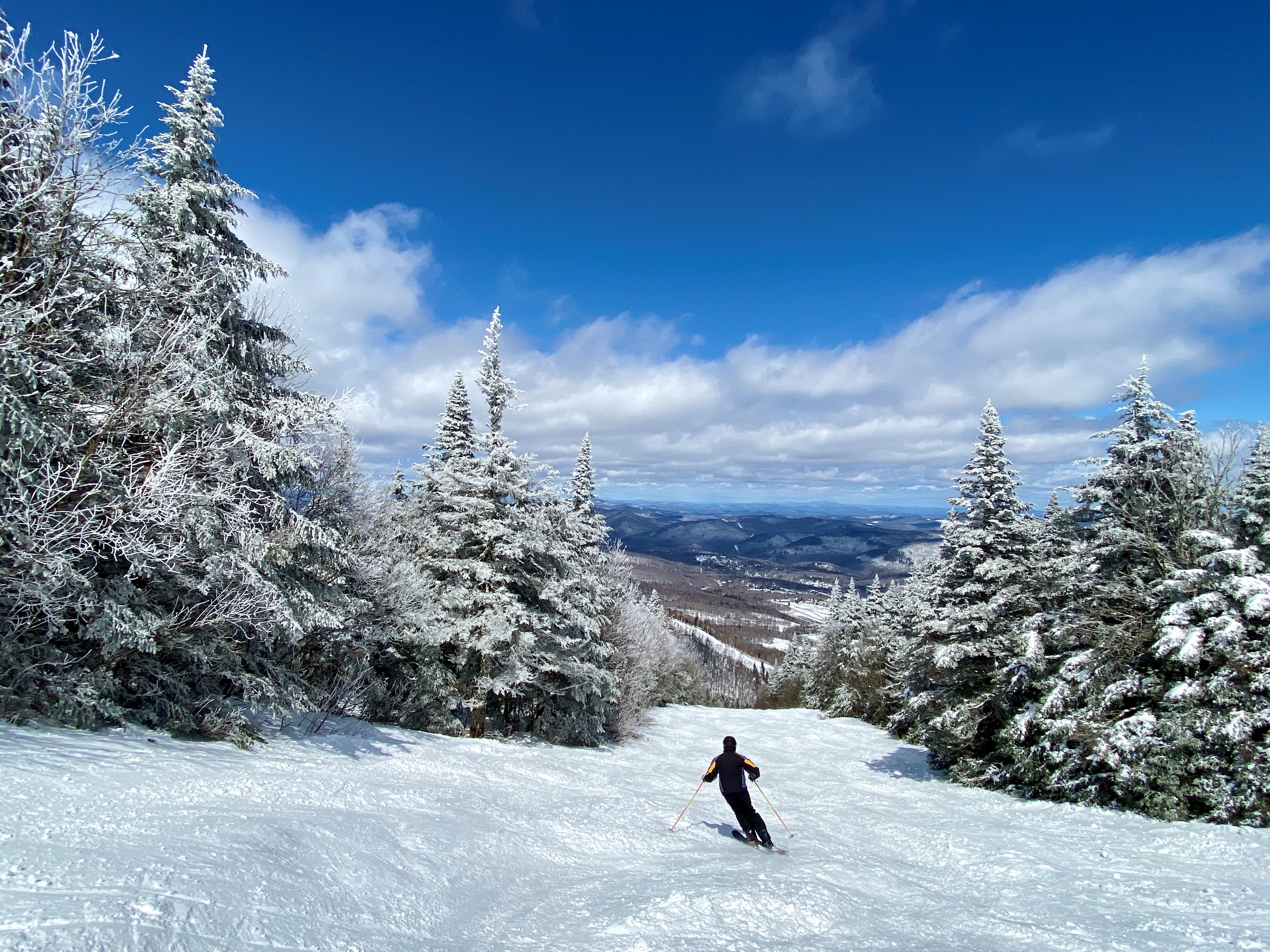 Do you remember all the big snows, or rather the lack of big snows? Let's see if you can recall these events at Killington according to their snow reports: 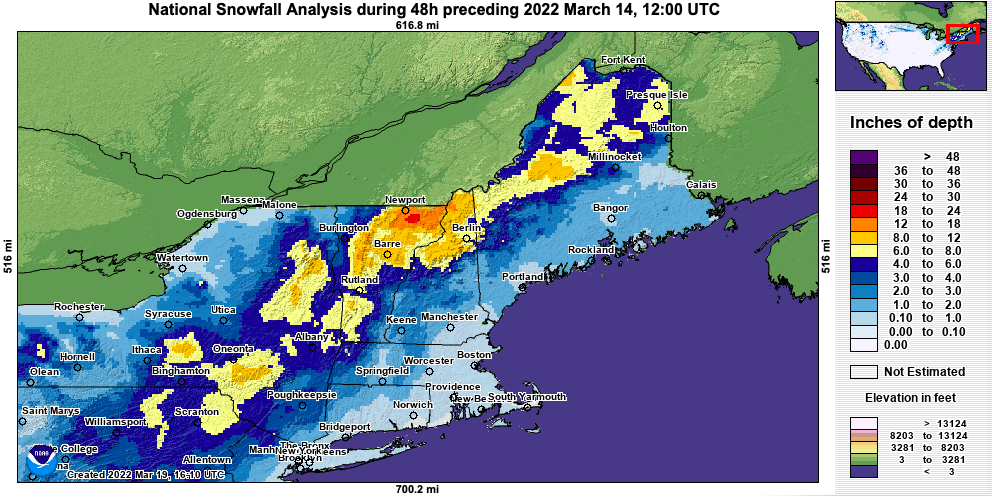 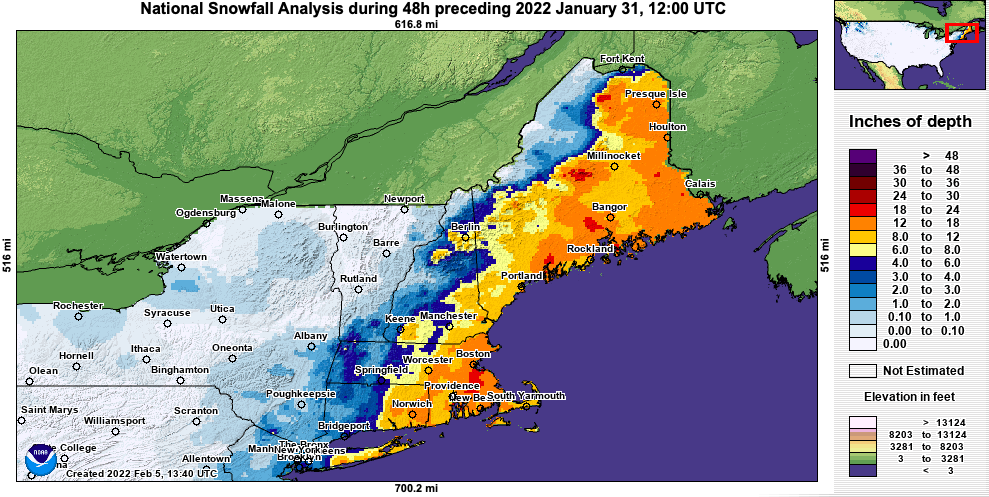 The lack of snow didn't stop resorts from making snow though. In the absence of snow, we saw many nights with below normal temperatures. In November 2021 alone, 25 of the 30 days had overnight temperatures just down the hill from Killington in Rutland below freezing. 25 of 30! That afforded them plenty of time to build machine-made bases early. The same story occurred in December and January with a higher frequency of daytime highs also below freezing. So even with a lack of natural snow, many resorts were operating close to 100% by January and dropping ropes with new snows through February. 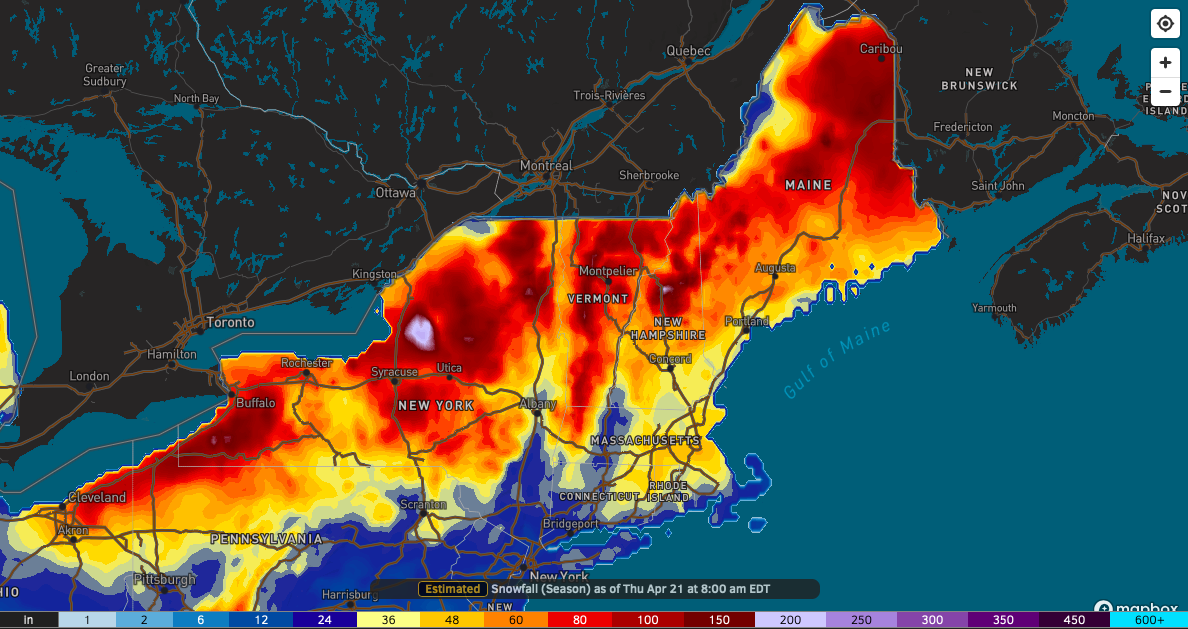 Estimated season-to-date snowfall as of April 21st. Dark reds across the lake-effect belts, Greens, Whites, and northeast Maine are all 150" or more. View the map yourself here in our Maps layer.

The big season total winner this winter was, as usual, Jay Peak. We don't track the season totals here at OpenSnow for individual resorts, but you can navigate over to individual resort websites in order to find their self-reported totals, or you can find the historical report calendar on our website and try to add them all up. The numbers won't add up. Why? Sometimes we receive duplicate reports, we don't receive any reports, reports are sometimes storm totals or only updates from a previous report. It's complicated. Anyways, here are a few totals using the different methods from around the region:

And that's a wrap on the New England Daily Snow for Winter 2021-22. Will it snow again this season? Probably. Are a few resorts still open? Of course. At this point though, those of you still skiing likely know what to expect and are keenly aware of where to find the forecasts for your likely destination (Jay/Killington/Tuckerman).

Thank you all for reading and following along this winter. I hope you found the information helpful in finding good snow and also learned a thing or two along the way.

Jason Cordeira
Meteorologist
Jay Cordeira is an all-around outdoor enthusiast living and working among the lakes and mountains in New England. When he’s not in the classroom teaching the next generation of meteorologists, you can find him on the trails, rivers, lakes, slabs, and backcountry of the White Mountains.
Read More