We Still Have March... 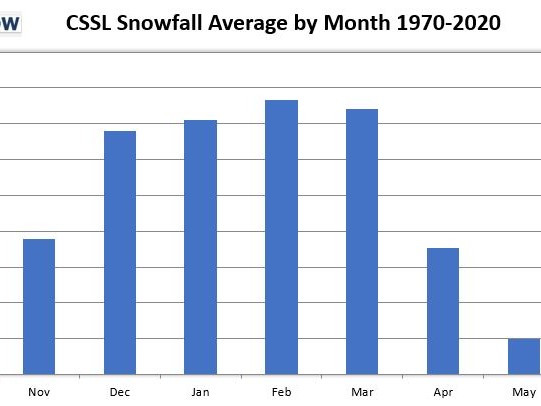 We have a dry pattern through the weekend. We will warm back up slightly Thursday into Friday before cooling down again Saturday. Gusty winds possible at times through the period. We are tracking a pair of storms next week that could move into CA, one for Mon-Tue, possibly Wed-Thu, and another for the end of the week.

I'm already starting to hear some rumblings that winter is over. Uh, it's only February. We still have March and even April. March is our 2nd snowiest month on average, only behind February by 3 inches! 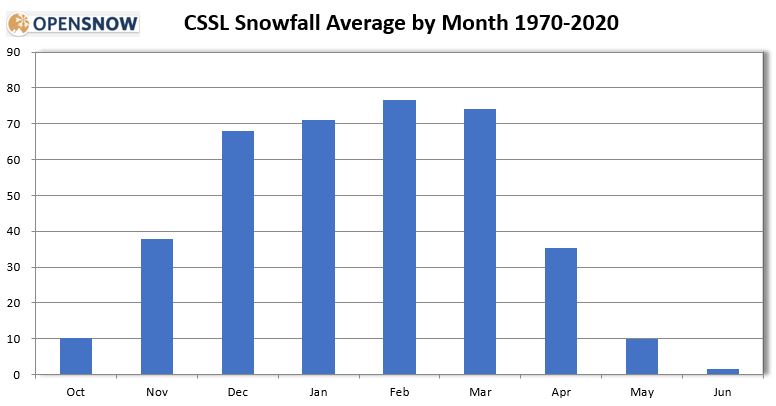 We don't start to drop-off until April and May. March was the snowiest month in 4 of the last 10 seasons. So winter is definitely not over yet. We will be dry through the last day of February on Sunday, but starting next week the pattern becomes more active as March begins.

Not much happening weather-wise over the next 4 days other than a shot of cooler air Saturday and some gusty winds each day. We should see mostly sunny skies through Sunday.

Highs into the 40s Thursday & Friday. Ridgetop winds were gusting up to 100 mph Wednesday night but have dropped off to 30-40+ mph this morning. They will pick back up again this afternoon gusting from the west 40-50+ mph by the end of the day and stronger again Thursday night. Then coming down some Friday but still gusting 30-40+ mph over the ridges.

Saturday a dry cold front sweeps through dropping highs into the 30s. Winds turning more northerly with ridgetop winds gusting 40-50+ mph by afternoon.Then lighter east winds for Sunday. Highs warming into the 40s at lake level and 30s for the upper mountains.

Still plenty of headaches with trying to forecast what happens with the system moving through the eastern Pacific for the 1st half of next week. We have a new scenario this morning on the European & Canadian models as well as the new GFS v16. They show the system splitting north of Hawaii with the low splitting off and heading south towards Hawaii. Then the northern piece dropping south into northern CA with light snow Monday into Monday night. 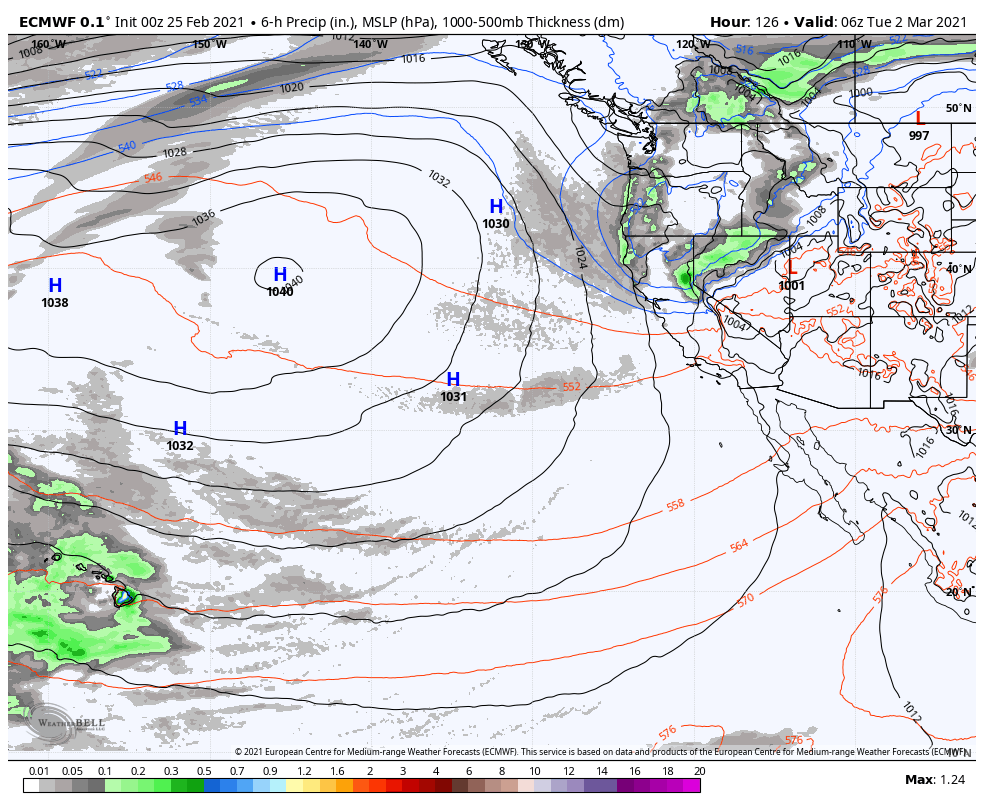 In that scenario, we could see 1-3 inches of snow on the mountains and a shot of colder air. Here is the total precipitation forecast through Tuesday on the European model. 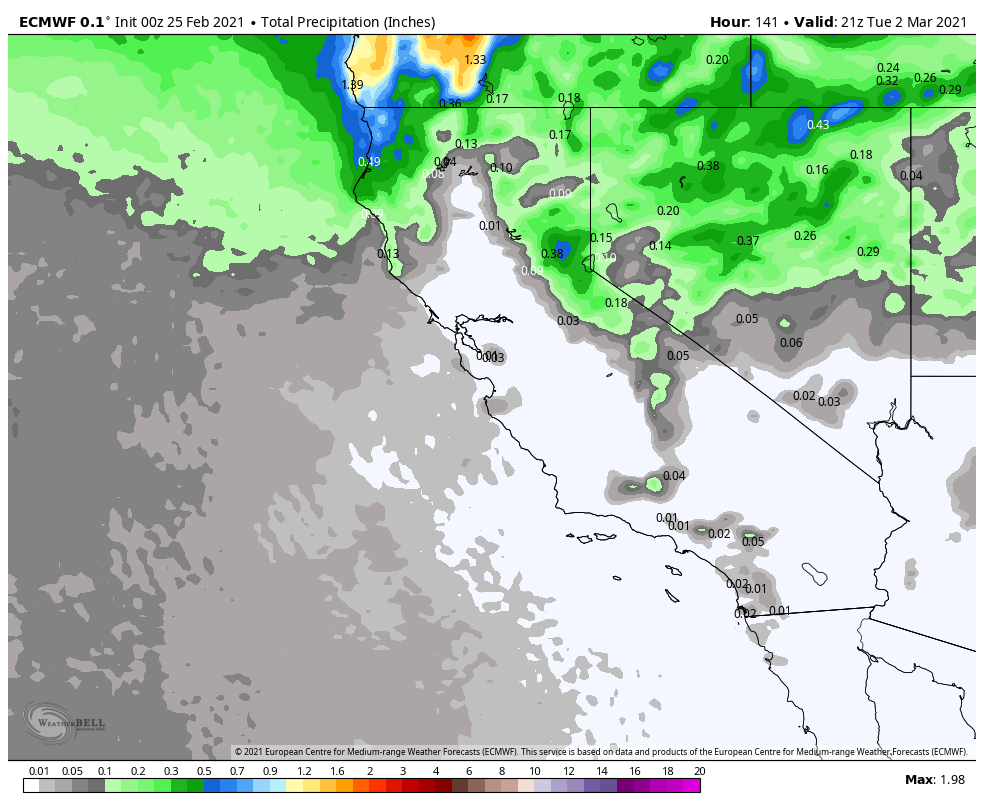 The GFS & ICON models still show splitting farther east off the West Coast with a closed low cutting off from the northern jet stream and drifting south, even southwest slightly, and eventually drifting far enough south to get picked up by the southern branch of the jet stream and moving into southern CA Wed-Thu. 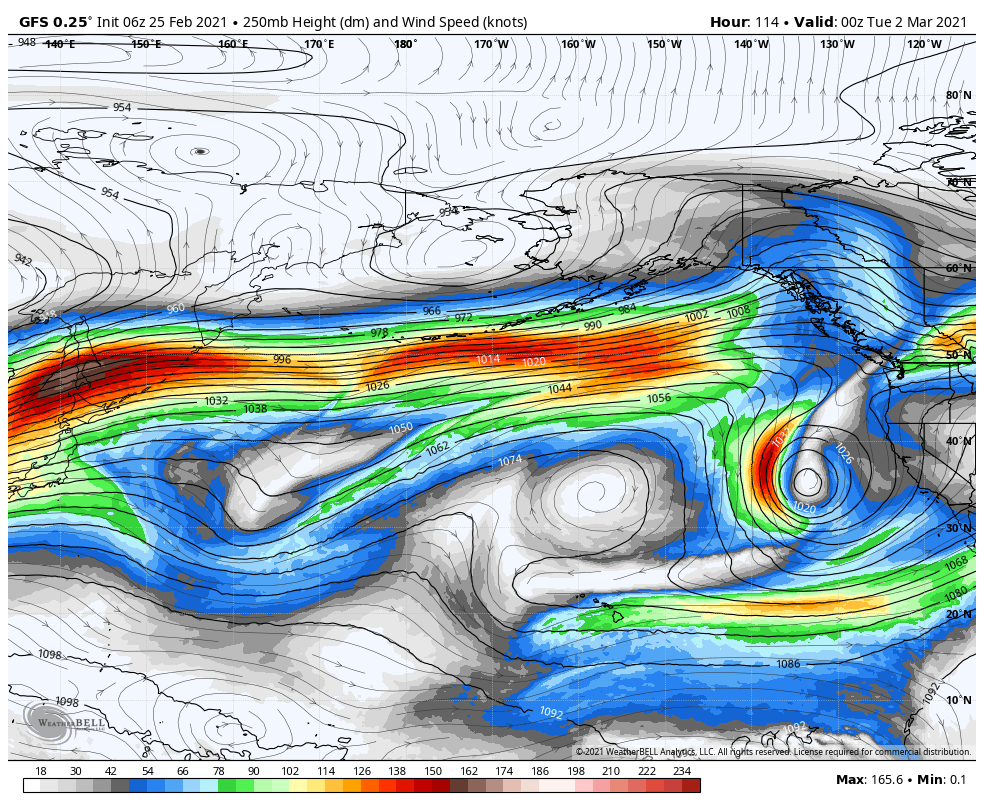 That would keep us dry through Tuesday as seen on the GFS model... 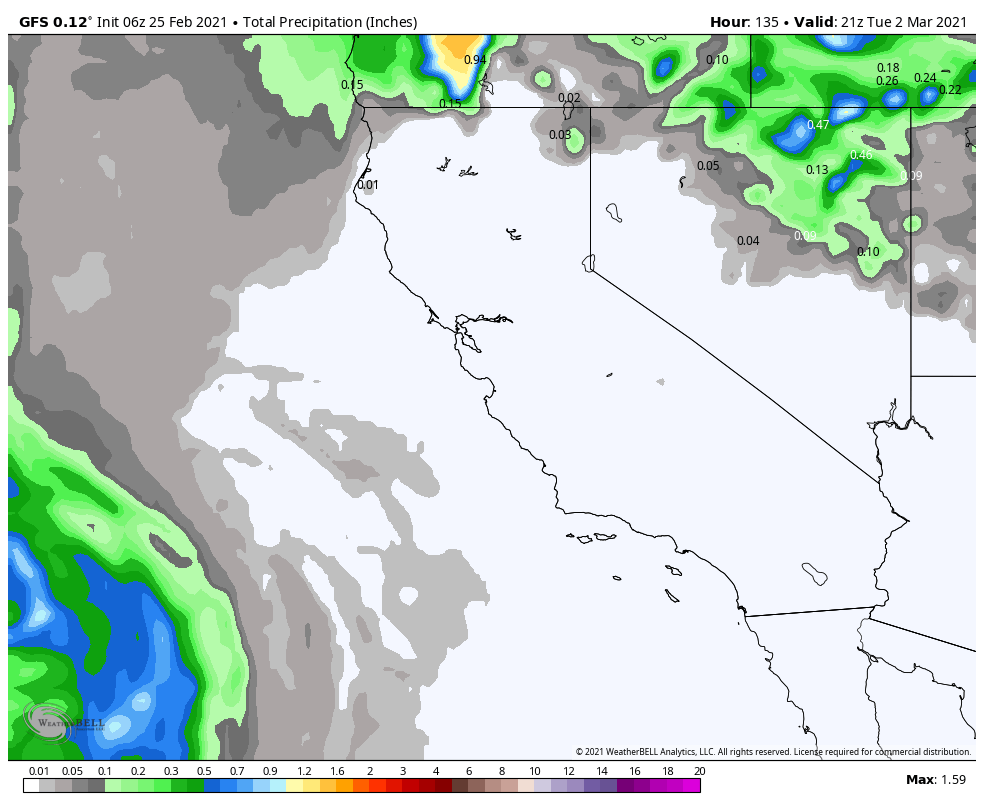 ...and then here is the forecast through Thursday as the low moves through southern CA, with some light precip/snow on the north side near Tahoe. 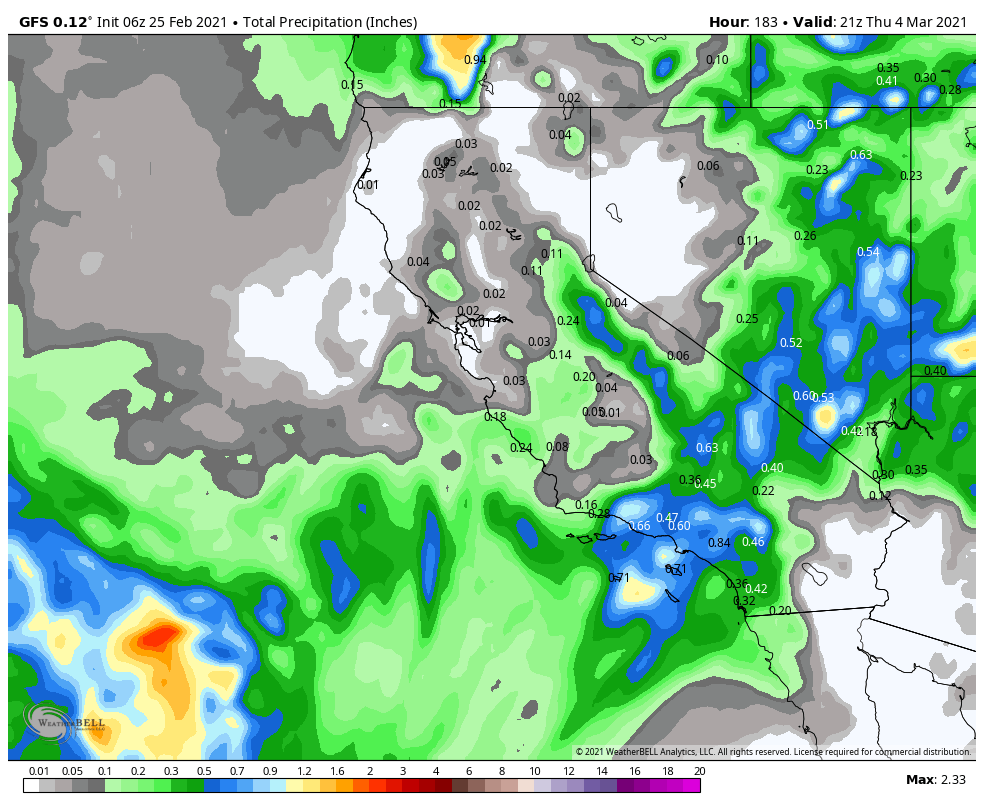 So we are still trying to figure out what is going to happen Monday-Thursday next week. Not enough confidence in either scenario yet to try putting out a snowfall forecast. Hopefully, we get more consensus on a solution over the weekend.

There is actually better agreement on what happens later next week into the weekend of the 6th. The long-range models continue to show the next system moving into the West Coast by next Friday night into Saturday. 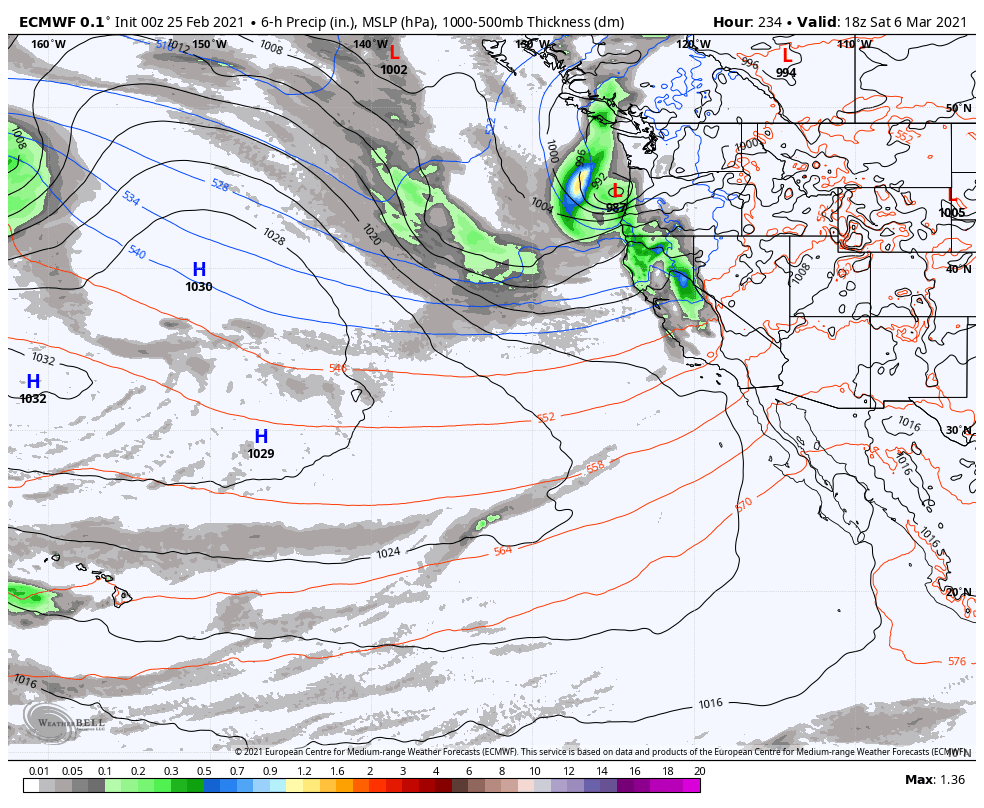 This system has the potential to be wetter than previous systems we have been seeing. So we will be watching it closely over the next week. 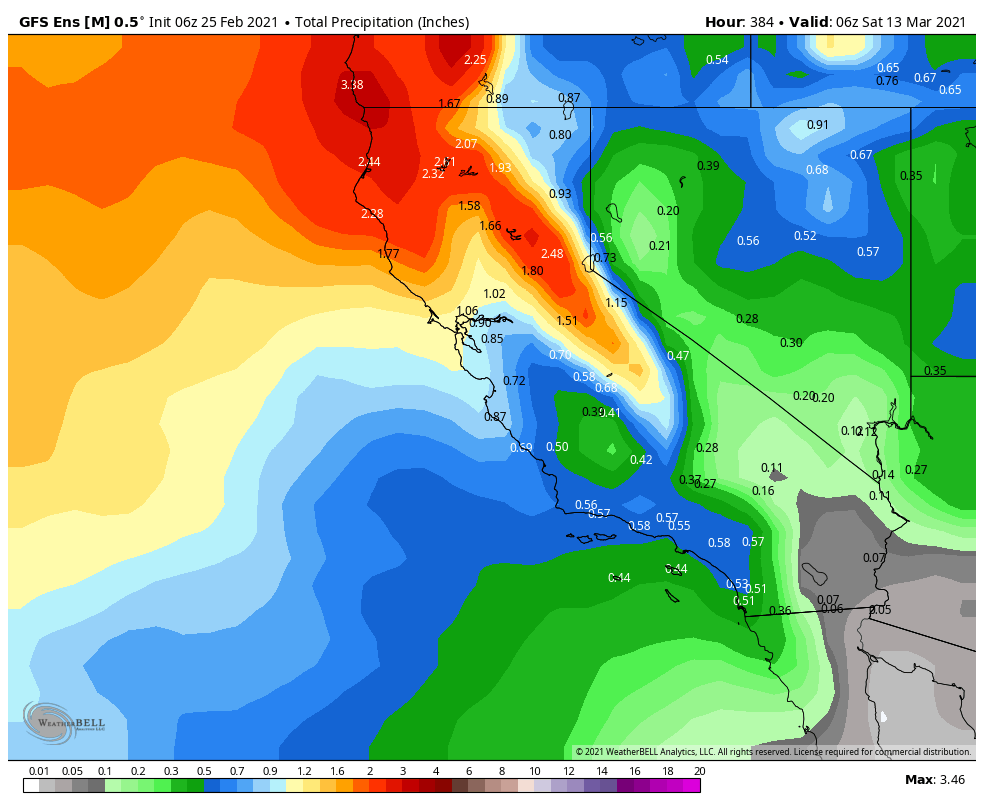 The GFS extended, European Weeklies, & CFSv2 models all suggest we could see average to slightly above average precipitation over the northern Sierra through the end of March, with the 2nd half of the month wetter than the 1st half. 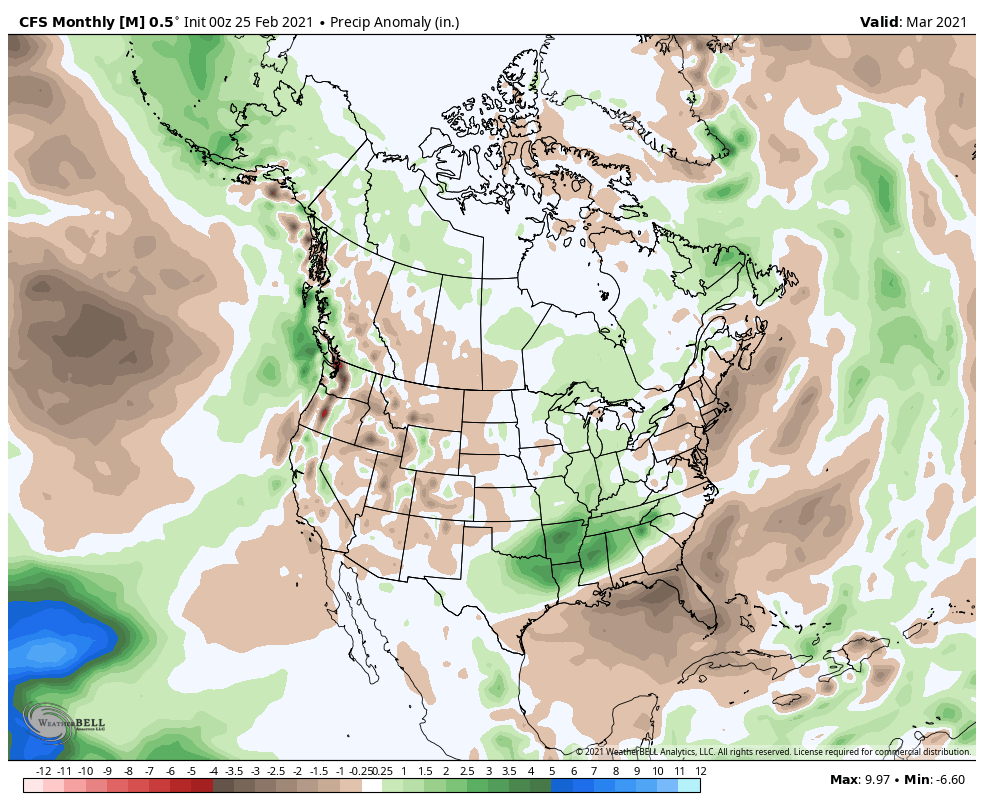 This is all speculation since it is still February, but just another reason to not say winter is over yet. March is historically a wet month, the pattern looks to become more active starting the 1st week of March, and the climate models suggest it won't be a dry month. We just need to get some bigger storms into CA! We will be watching closely and letting you know when we see a good one...

The new episode of The Flakes Podcast is out! This week we talk to Evan Thayer about the amazing skiing after Interlodge at Alta, and having respect for ski patrol. Plus we go through the 5-day snowfall reports & forecasts for each ski state!