2 systems to talk about

There are 2 short wave troughs entering the Rockies primarily Monday morning and again on Wednesday. The PNW stays very wet with 3500-4500 foot snow levels early this week before rising to 6500-7,000 late week. A colder storm with decent snowfall Is likely to impact the Northwest and interior BC late next weekend

If you want blower pow, head to Alaska where light to moderate snow will be falling over Aleyeska in the next few days.  Heavier snow is possible Wednesday or Thursday.  Temps stay cold so quality should be good.  Disclosure:  I don't have experience chasing there so am not able to comment about terrain openings, or storm skiing there.  Fog is a common culprit due to most terrain being above tree line. Snowfall on the models looks to increase mid to late week.

In the Pacific Northwest rain has fallen on the Coast of Washington every day this month! In fact, rain has fallen on the Coast for the past 34 days continuously.  The record is streak is 49 days that occurred in 1961.   In Seattle there has been precipitation 22 of the 24 days! The PNW stays very wet with 3500-4500 foot snow levels early this week before rising to 6500-7,000 late week.  A colder storm with decent snowfall Is likely to impact the Northwest and interior BC late next weekend

In the Rockies, my chase card is watching the Tetons and Wasatch for Monday night.  Moderate snow is likely for 1st chair or tram in both locations.  Winds favor the Wasatch (4-7 inches for Monday morning) but moisture is heavier over the Tetons with decent westerly winds (Good for JHMR).  My gut tells me that JHMR scores 5-8 inches by 10 AM Monday.  Lighter snow is likely in western Colorado especially north towards Steamboat where 2-5 inches might fall.  Generally 2-4 inches are likely elsewhere perhaps higher towards the western corridor of I-70 (Aspen, Sunlight).  The Good:  Overnight snow with a nice refresh for Monday morning. The Bad:  Not overly deep, fast moving.

Wildcards:  Big Sky should edge out some light snow (2-5) as well as some freshening in Western Idaho.

A 2nd system approaches the Rockies midweek.  That system is likely to land a slightly stronger trough for the northern Rockies favoring the Tetons, Wasatch and northern Colorado for Wednesday (4-9 additional).  Between the fast moving system Monday and this midweek storm some locations will have weekly totals in the 6-12 inch range (No single double digit overnight or 12 hour dump).

Below: Total snowfall, combined Monday and Wednesday systems for the Rockies. Areas favored are the Tetons, and Wasatch followed by northern Colorado.  The Wasatch may grab higher amounts than indicated on this map purely from NW wind direction and some orographics that are not depicted here. 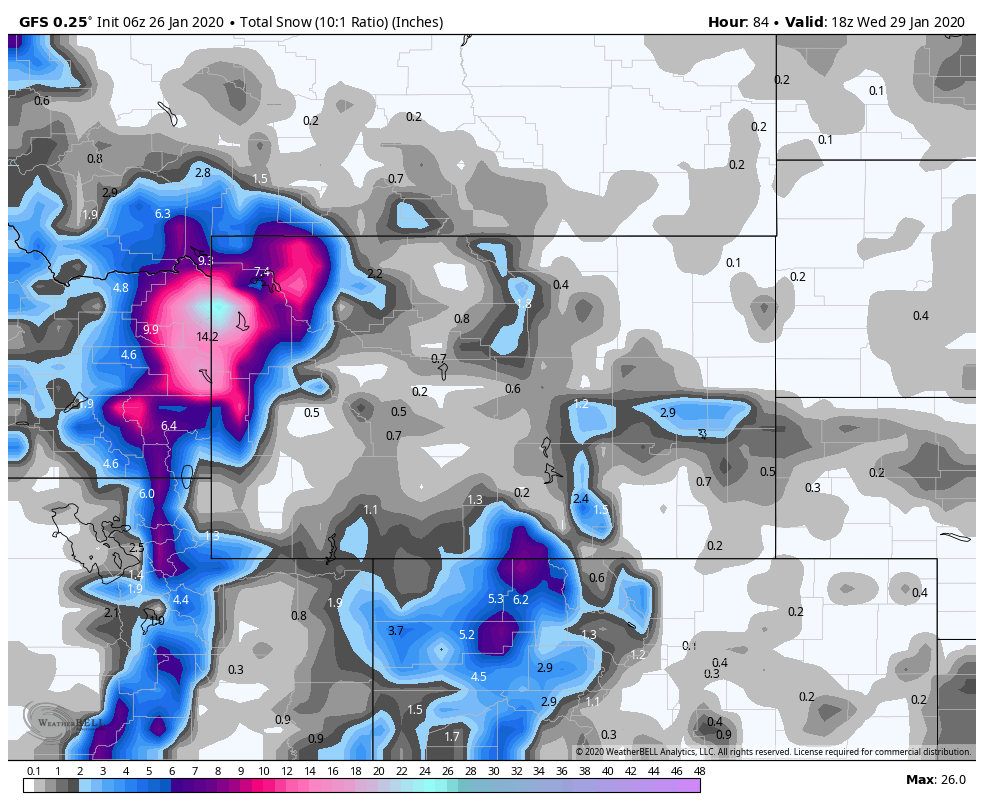 The extended continues a wet pattern for the PNW.  Unfortunately, snow levels rise considerably late this week before cooling sharply by Saturday night.  The only storm worth watching is late this week is Sunday/Monday when decent quality powder is likely for the Cascades and Whistler.  Interior BC will see moderate snow while areas further west grab higher amounts.

In looking out 7-10 days, there is a likely 2nd storm for the PNW in the February 5th timeframe (Cool temps) followed by a warm front towards the tail end of the event.  Interior BC will stay cooler so upper elevations may ski well in that period with continued light to moderate snowfall (Better quality than the the coastal resorts, with lower totals).

The operational models are not very bullish for the Rockies however the Ensembles show low pressure likely impacting the northern and central Rockies in the February 5th timeframe.  Its too far out to forecast with confidence.  Moderate confidence exists that a return to some unsettled conditions occurs for the Rockies during the timeframe (February 5-6th timeframe). Its still unclear if we see any double digit storms.