On Sunday, we saw a few inches of lingering snow in the morning and another few inches in the evening. Now on Monday morning, the steadiest snow is over the central and southern mountains and we should see an additional 3-6 inches through midday. The next wave of snow will be on Tuesday night and will only hit areas north of I-70. Then we’ll finish the week with a stronger storm from Thursday night into Friday with most mountains in the 5-10 inch range and higher amounts of 10-20+ inches in the southern mountains.

Sunday morning’s conditions were soft at many mountains in the northern half of Colorado with a few inches of snow falling after the morning report.

Following a lull on Sunday, another weak wave of snow dropped 1-3 inches on Sunday evening.

And now on Monday morning at sunrise, yet another wave of snow is bringing the most intense snowfall rates to the central and southern mountains.

The cam at the base of Crested Butte shows the intense snow in the central mountains. Crested Butte's mid-mountain snow stake received 3-4 inches on Sunday night and then 2-3 inches accumulated on Monday morning between 500-700am. 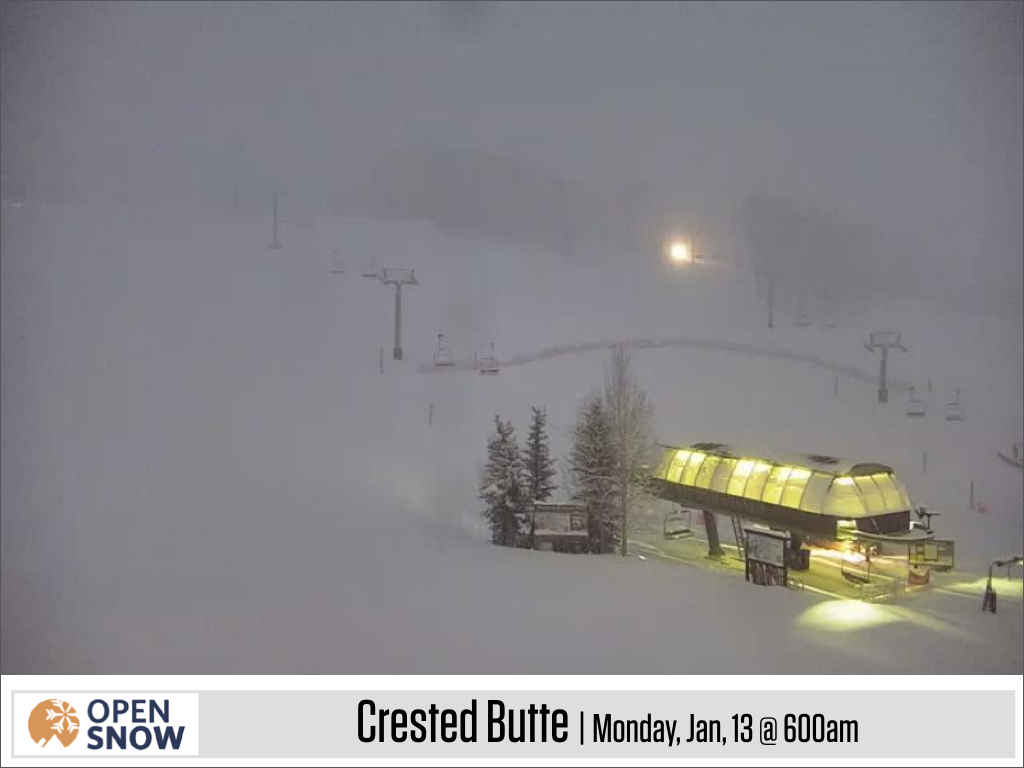 Expect Monday morning’s steady snow to continue through about noon and then it’ll transition to on-then-off showers.

Monday night and Tuesday will be dry with a solid break between systems.

Then another wave will move through on Tuesday night. For nearly one week, this Tuesday night wave has been the most consistent part of the forecast. A few days ago, a few models trended the track of this wave farther north, but it still looked like it would bring solid accumulations to the northern mountains. This was the forecast I posted yesterday for the Tuesday night wave. 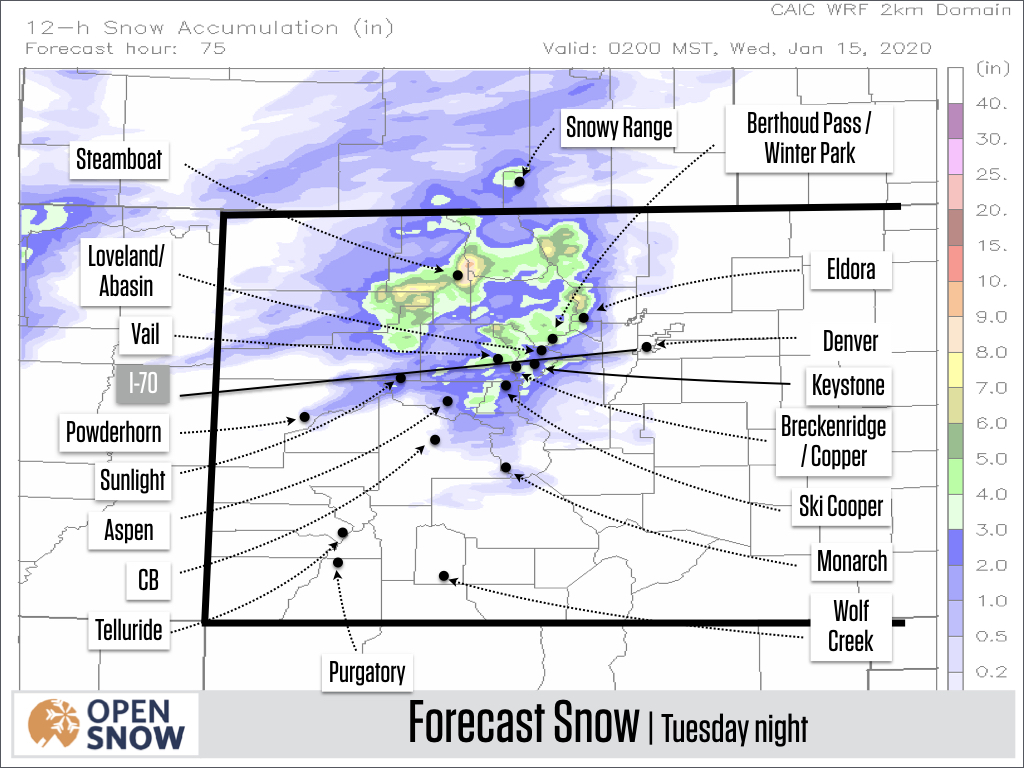 Unfortunately, in the past 24 hours, all models have trended the track of this storm even farther north. This means that on Tuesday night only the mountains that are north of I-70 could see a quick 2-6 inches. This includes Steamboat, Winter Park, Eldora, and Cameron Pass. Here is the latest forecast for Tuesday night. 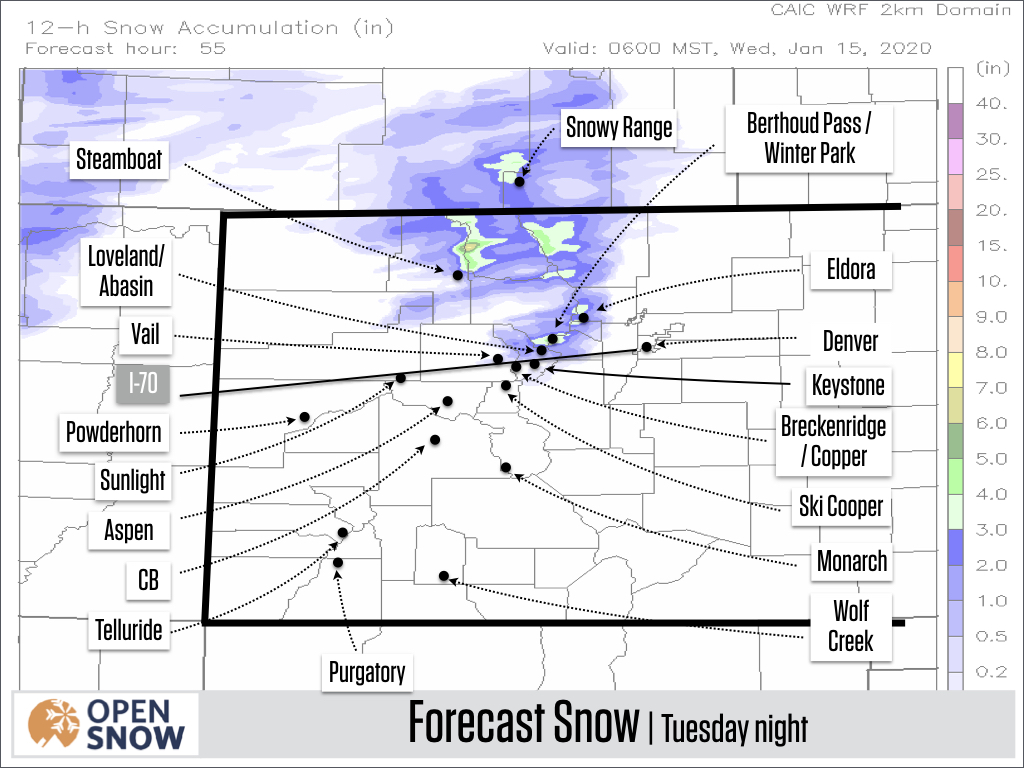 Wednesday and Thursday morning will be dry. 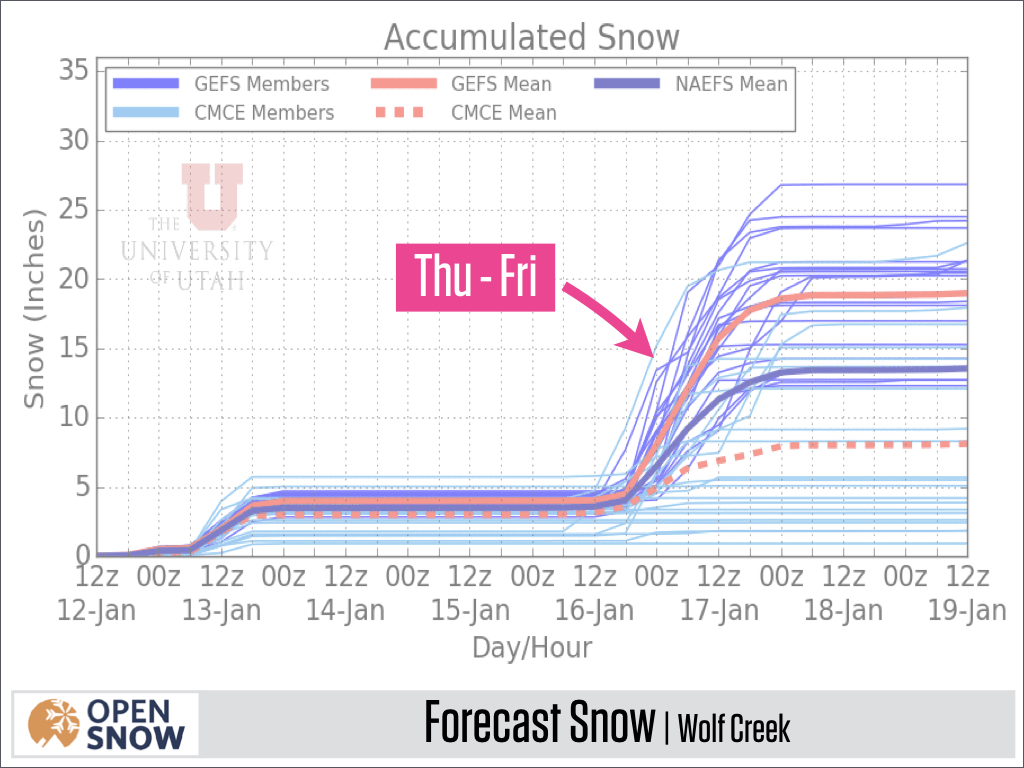 The atmosphere will shift the stormy weather pattern away from the western United States and Canada with mostly dry weather for us from about January 18-25th. After that, it’s too far into the future to know if we’ll see storms sneak through or around the ridge of high pressure that will cover the west or if we’ll stay dry. Stay tuned.

My next update will be on Tuesday morning.