The Governor announced that the stay at home order will end on April 27th. Despite this, ski areas are still closed for the foreseeable future. Weatherwise, snow fell on the northern and central mountains on Thursday night with 4-9 inches of accumulation in the northern mountains on Friday morning. We’ll see more snow showers on Friday and Saturday mornings, and then next week, our temperatures will warm and the weather should be dry.

Should You Go Skiing?

While it appears to be legal to go skiing, my take on this is that it's probably best to not ski.

If you go skiing in the backcountry, please stay close to home, do not travel to mountain communities if you don't already live there, and put yourself in a low-risk situation so that you do not have an accident that requires search and rescue (here's an amazingly-good article about what happened near Telluride on March 24th).

Based on SNOTEL stations and mountains cams, it looks like most mountains near and north of I-70 picked up 4-9 inches of accumulation as of Friday morning at 800am. I am not calling out accumulations at specific mountains based on requests from local town officials that want to limit the number of people that come to town to seek powder. If you are motivated, I am sure that you can do your own SNOTEL research to see where the most snow fell. Farther south, there were light accumulations over the central mountains with a dusting to 2 inches of snowfall.

Now on Friday morning, I-70 at Eisenhower Tunnel (~11,000 feet) is snow-covered. As the sun angle increases through the morning, the roadway should transition from snow-covered to wet. Even though snow may continue to fall, and clouds may stick around, enough short-wave radiation from the high April sun angle will hit the road to cause the snow to melt. 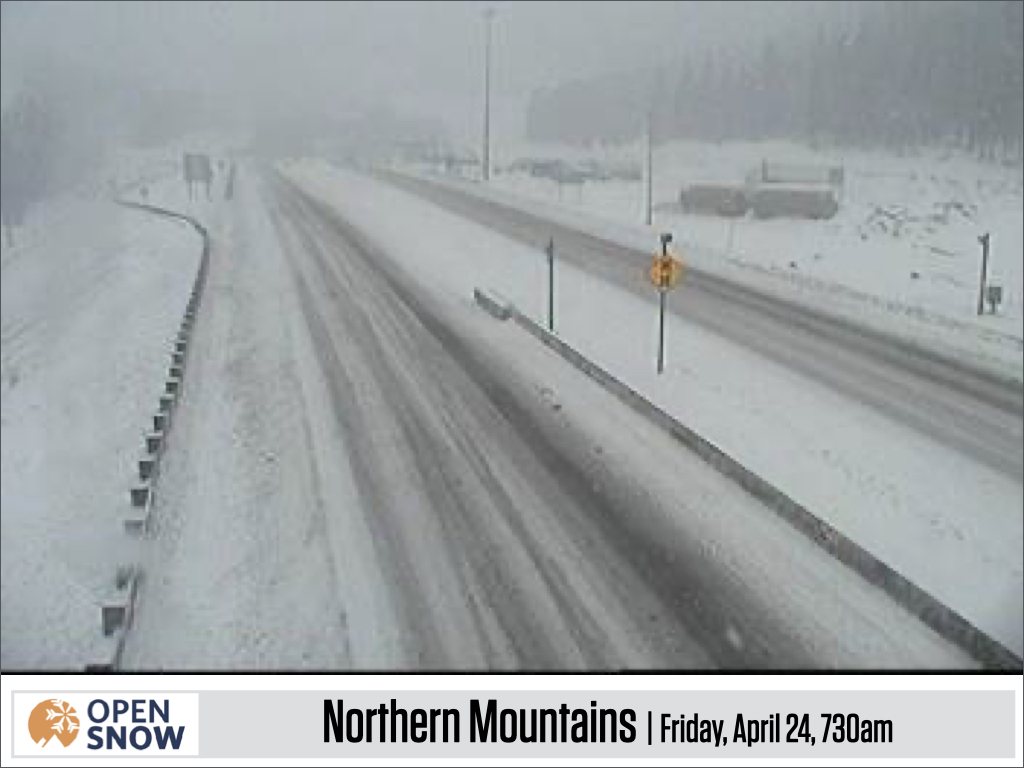 The visible satellite image shows that clouds are covering most northern mountains. Based on cams and radar, snow showers are continuing now on Friday morning under these low clouds. 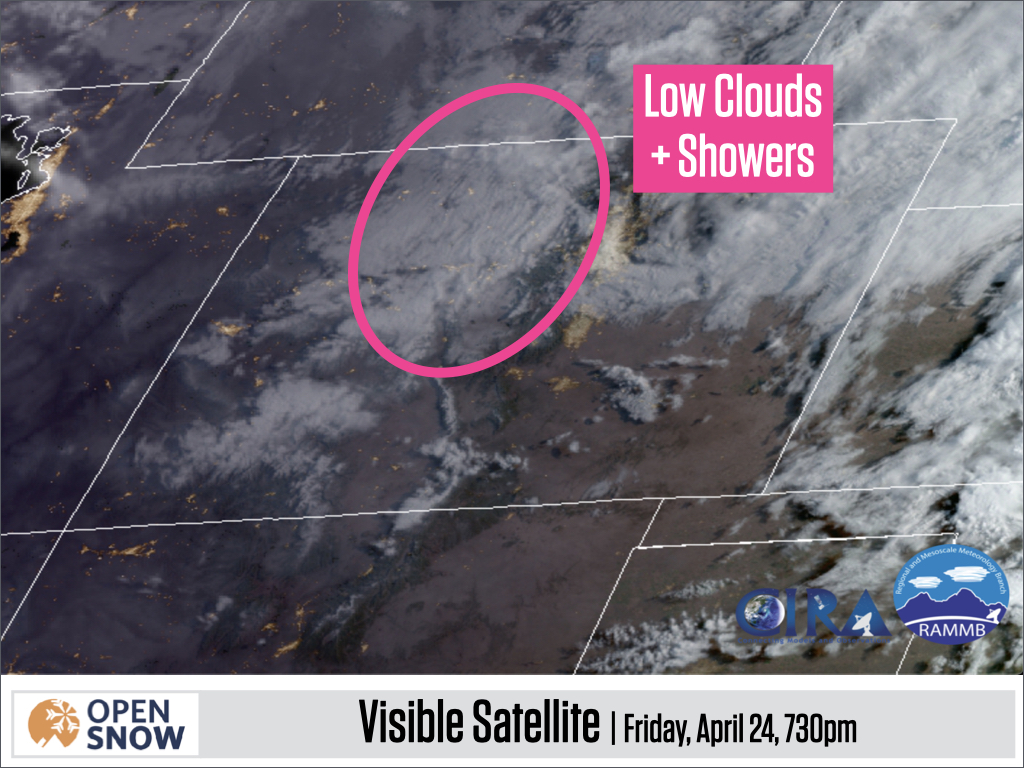 Friday’s weather should bring a few more showers to the northern mountains with another coating to 3 inches of snow. The best chance for accumulations will be in the morning with fewer showers and maybe some breaks of sunshine during the midday and afternoon.

Saturday’s weather should be similar to Friday with the best chance for snow showers over the northern mountains in the morning followed by more breaks of sunshine.

Sunday’s weather should be drier, but there could still be a few showers over the northern mountains.

Next week, spring will arrive.

The 5-day forecast for Monday, April 27 through Friday, May 1 shows high pressure over the western United States. We’ll see dry weather and mountain temperatures in the 40s most days, with highs in the 50s on Thursday. Our snowpack will begin a steep decline. 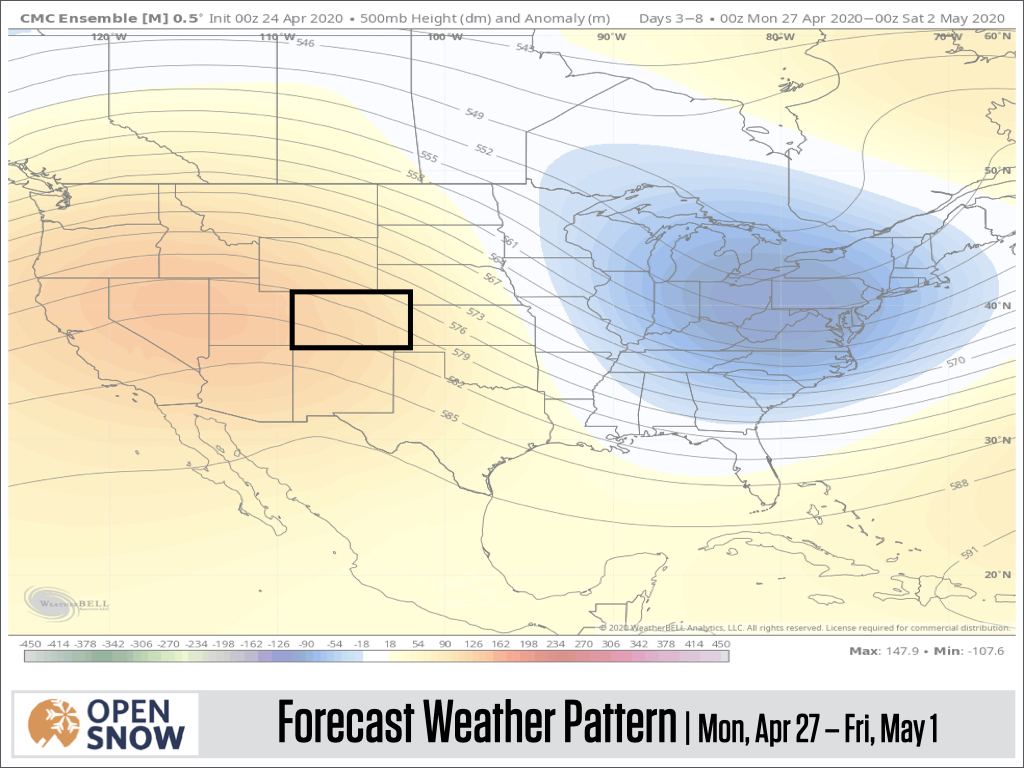 Looking ahead to the following week, from Monday, May 4 through Friday, May 8, the forecast is a bit more mixed (the black lines are more west-to-east vs bulging northward, and the color shading is more neutral). This means that from May 4-8, there is a higher chance for showers (rain and snow). For a bit more detail…the map above and below shows the average forecast for 20 versions of the Canadian model. When we see more neutral colors, the model is indicating that some versions show drier weather and some versions show more precipitation. 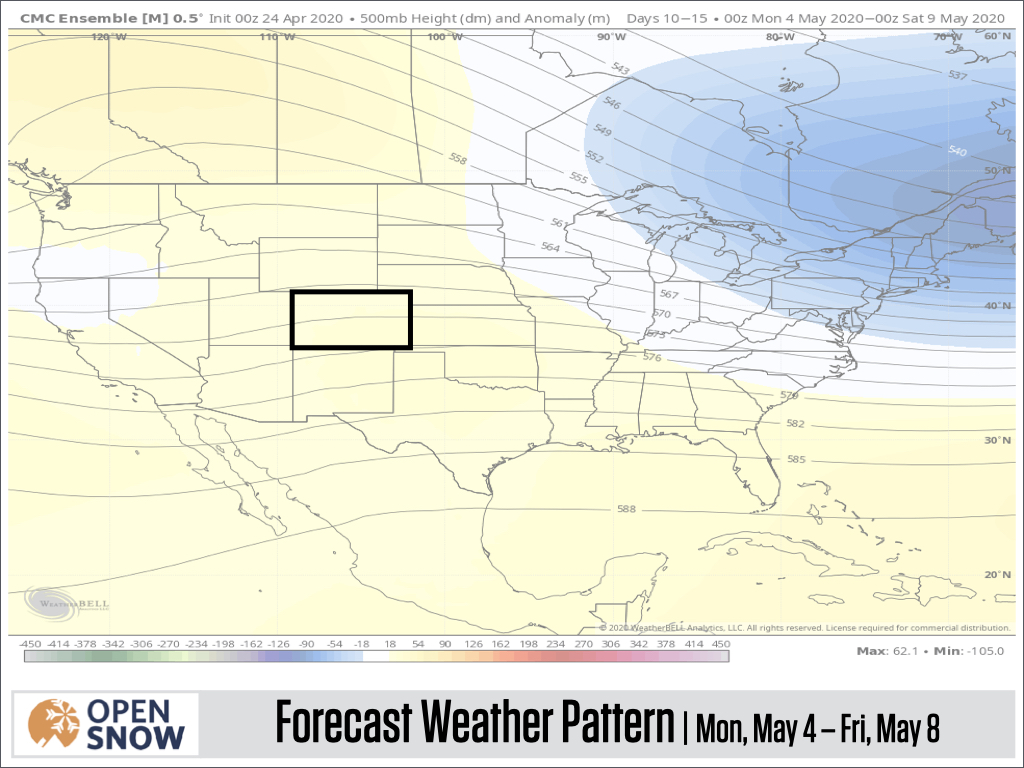 This is Colorado, and with high mountains, we’ll see snow through May and maybe even into June. But with the majority of the season’s snow behind us, I will wind down my daily posts with my final wrap-up post on Sunday, April 26th.

As the snow accumulation season winds down, and the hiking/biking season starts up, be sure to check our other service OpenSummit.com and the OpenSummit App for iOS and Android for hourly forecasts for hundreds (soon to be thousands) of peaks and trails around Colorado and the United States. OpenSummit clearly shows lightning risk, temperatures, winds, precipitation, and cloud cover at the elevation of the trails. Also, in a few weeks, we will add new features that will be especially cool - more on that soon.