Arapahoe Basin Closing on Sunday, June 7 + The Warmth of the Mountains

Following the closure related to COVID-19, Arapahoe Basin was reopened for lift-serviced riding on May 27th.

Now, a little more than one week after they reopened, their COO Alan Henceroth announced on his (informative and fun-to-read) blog that Arapahoe Basin has scheduled closing day for Sunday, June 7th. Lift-serviced skiing at Arapahoe Basin requires a reservation, so please don’t rush there this weekend to get one final day on the hill unless you have a reservation.

Closing down on June 7th makes sense as the high sun angle and warm temperatures during the past two weeks have taken their toll on the snow.

Across Colorado, snow is melting ahead of schedule due to the warm temperatures. Below, the blue line is this season and the thick red line is the median. We are melting out faster than the median. 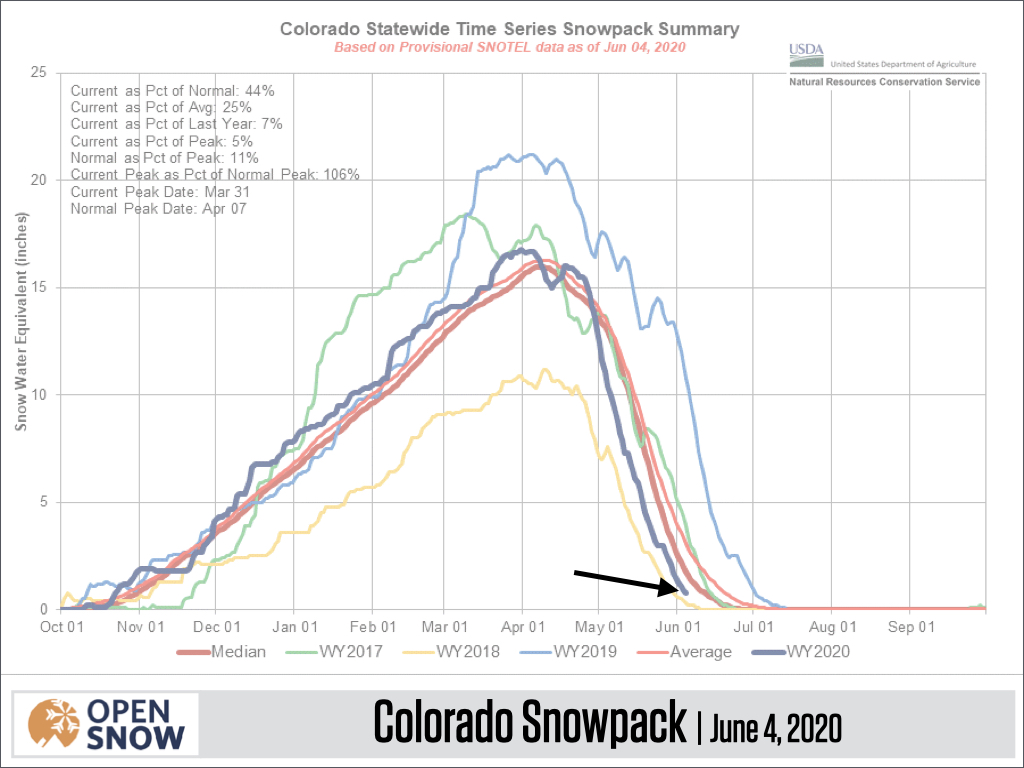 Even though the trend is for warming weather and melting snow, the atmosphere can buck the trend at any time. And one of those times is coming up on Monday night, June 8-9.

On Monday night into Tuesday morning, temperatures at 10,000 feet are going to fall well below freezing. The map below shows temperatures in Celsius, with blue colors noting areas colder than freezing. 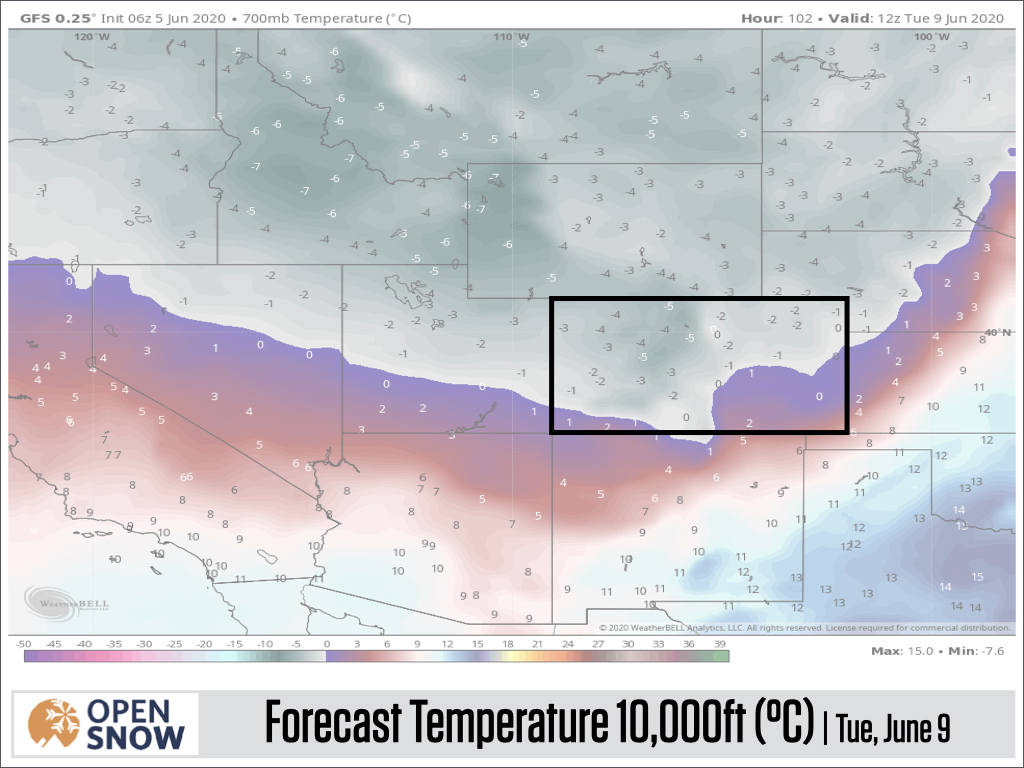 As temperatures drop below freezing on Monday night, there will be some precipitation falling. So it’s likely that mountains of central and northern Colorado will see snow, and this snow could fall down to 8,000 feet or below if the precipitation continues to fall as the temperatures reach their coldest readings on Tuesday morning. 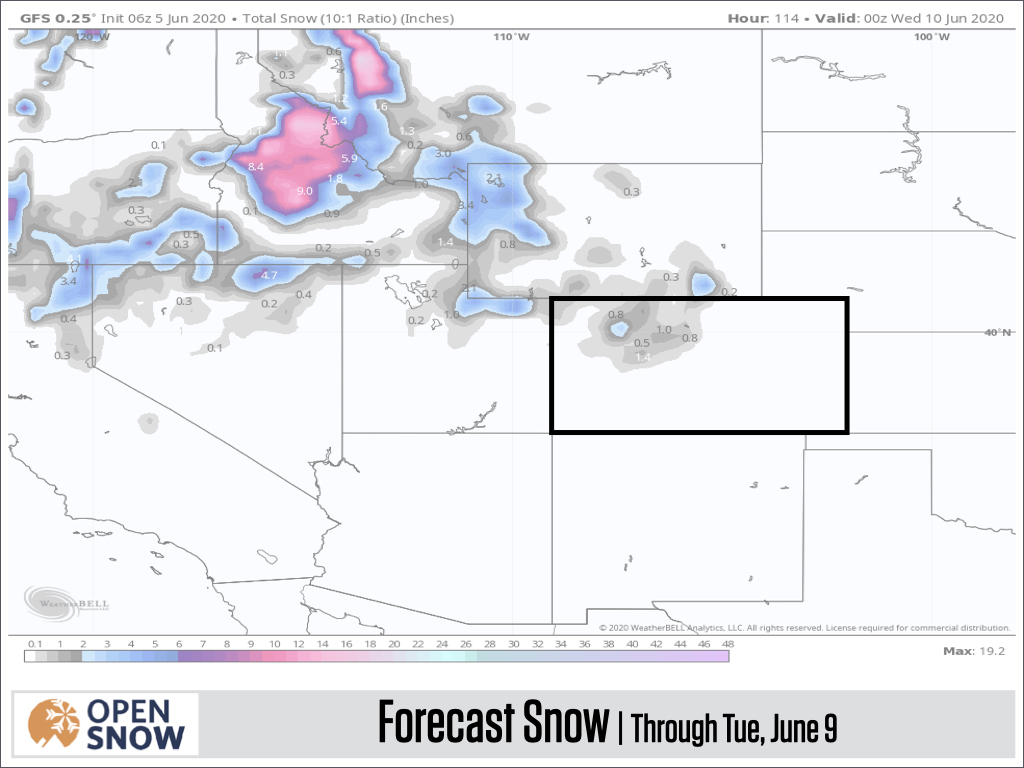 How delightful it will be to wake up on Tuesday morning and (hopefully) see fresh snow on the higher elevations. I love summer, and I especially love a little break in the heat and the contrast of snowy peaks against green and warm valleys.

The storm on Monday night will be one-and-done, and temperatures will warm back up during the rest of the week with no cold storms in the foreseeable future.

Even though snowfall will be scant for the rest of the summer, for more skiing content this over the warmer months, I recommend these two podcasts.

The first podcast is the Vail Resorts podcast “Epic By Nature” and gives a bit of behind-the-scenes information going back to the creation of the Epic Pass over 10 years ago and also as the company prepared to shut down resorts in mid-March due to COVID-19. This podcast is produced by the company, so you could argue that they will only present themselves in a favorable light, but after listening to a few episodes, it came across as genuine and not simply a public-relations play, so I wanted to mention it here. Of course, you’re free to make up your own mind on that issue.

The second podcast is the Storm Skiing Journal where Stuart Winchester conducts deep interviews with many ski industry leaders. I especially enjoyed Episode 16 where Stuart talked with the founder of the Indy Pass. They discussed a lot of numbers (ticket revenue, average days skied on the pass, etc). Many times, these numbers are NOT discussed, so I enjoyed hearing them out in the open.

Before signing off, I’ll leave you with a brief story and a few pictures of our family’s “adventure” to Arapahoe Basin on Thursday, June 4th. I say “adventure” because, to our 2 1/2-year-old son, every hike, bike, and trip is an adventure, and that’s a fun way to look at it.

After checking a few high-resolution weather forecast models, it looked like any evening storms would move away from Arapahoe Basin by about 500pm, so we arrived right around then, waited out the final raindrops, and then geared up as the late afternoon sun evaporated any trace of rain and bathed the mountain in a warm, summer afternoon light.

With my son on my back, and next to my wife and another friend, we skinned (with our uphill access passes) from the base to just above mid-mountain. There were a few other folks skinning, but there was plenty of room to socially distance and enjoy the mountain. 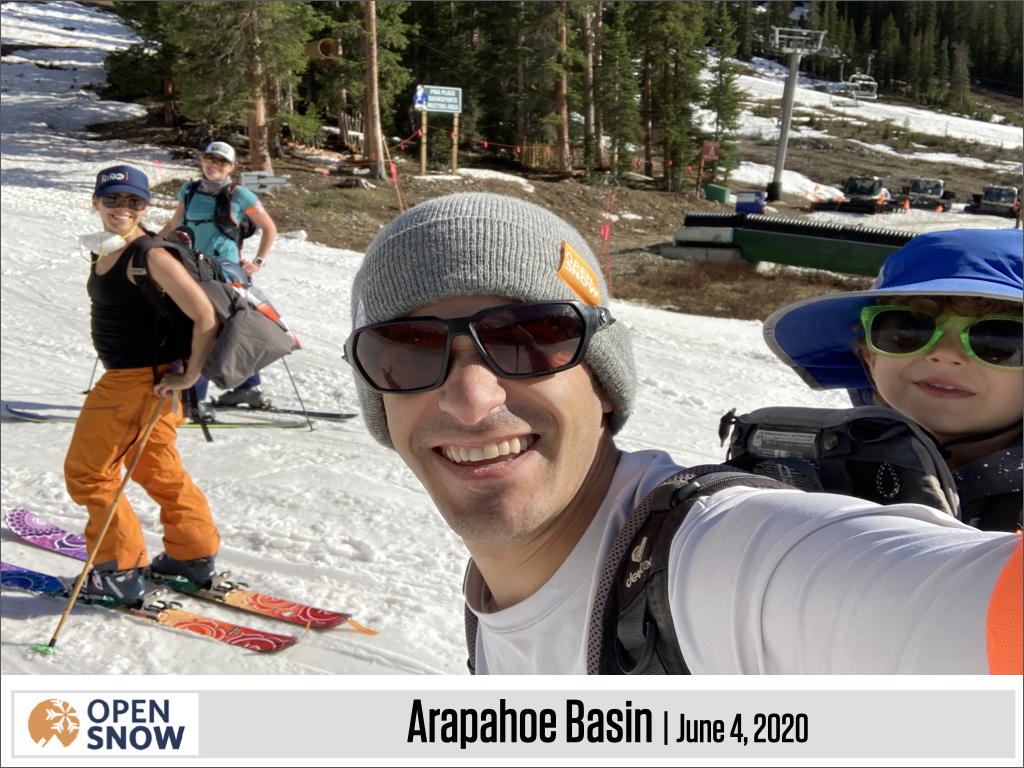 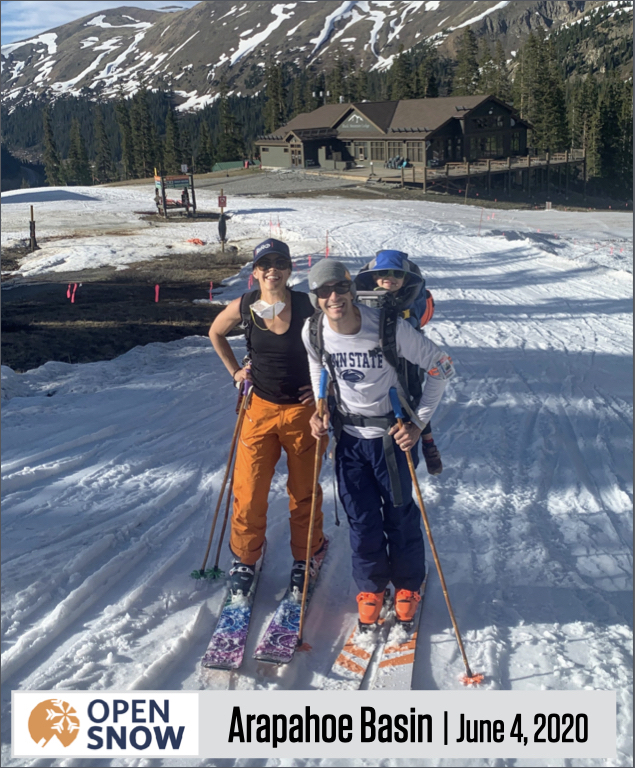 We transitioned to skis just above Black Mountain Lodge and enjoyed a leisurely ski down. My son sometimes skied by himself with the aid of straps that I hold to slow his speed, and on some of the steeper sections, I held him between my legs. The snow was soft and super fun. And we all had a blast. Thanks to my son’s newfound love of a small stuffed dinosaur that was strapped into his snowsuit for the ski down, each pitch of skiing started with the loud call-out of “Dino-Ski!”. We all got a kick out of it.

This late-season ski had one similarity to the late-season skiing that I enjoyed when I was a teenager: The combination of the warm afternoon air and the warm afternoon light. This combination of warm air and warm light spreads a calm happiness over me that I am sure many of you have felt as well. As a teenager, I felt this at Shawnee Mountain in March, at an elevation of 600 feet. Now in my late 30s with a family, I felt this at Arapahoe Basin in June, at an elevation of 10,800 feet. It’s such a gift to enjoy wonderful moments on the mountains that we love.

For the next few months, I’ll be hiking, biking, and running around the mountains, enjoying the trails and working to avoid storms and lightning.

While we use OpenSnow to guide us to the best powder in the winter, we built a service called OpenSummit to guide us away from storms and lightning in the summer.

OpenSummit provides a quick 5-day snapshot forecast along with detailed hourly forecasts, including lightning risk, for about 1,000 of the most notable mountains and trails around Colorado and the United States. 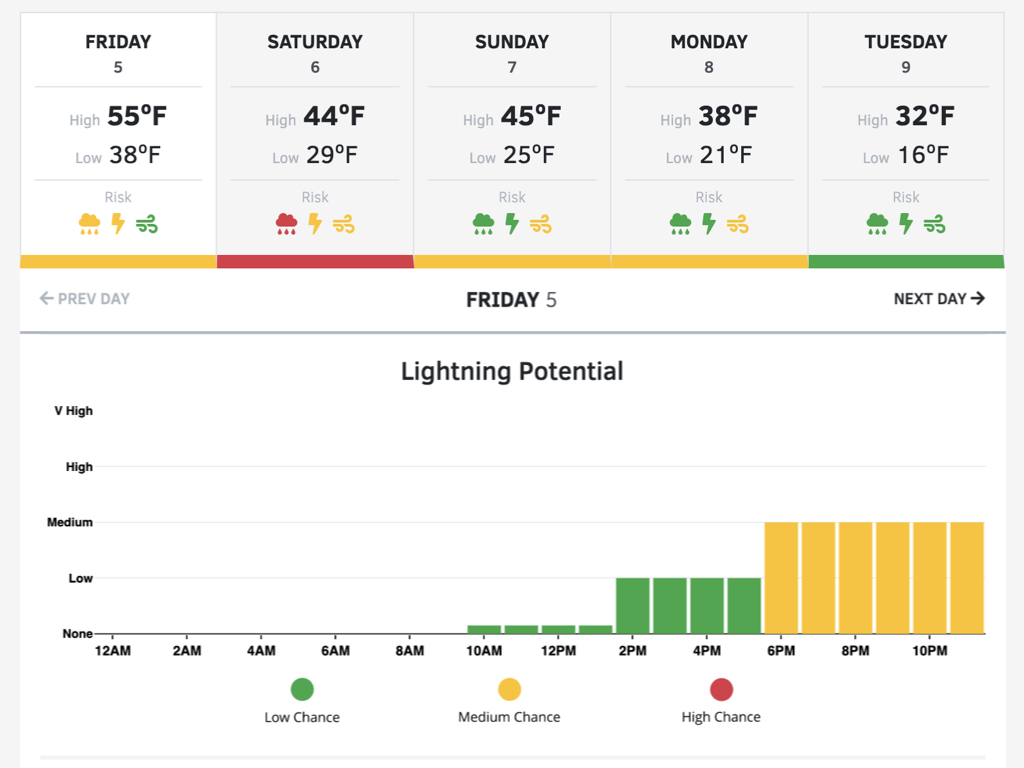 If you are an OpenSnow All-Access subscriber, you can use all the features of OpenSummit at no additional charge (OpenSummit is included in your OpenSnow subscription)!

We are planning to add a few new features to OpenSummit over the coming weeks, and when we do, I will write an update here to walk through those new products and why I think they are super useful.

Thanks so much for reading, and happy summer!

PS: If you’re looking for my end-of-season summary post from April 26, 2020, you can find it here: https://opensnow.com/dailysnow/colorado/post/18857