Pictures from planes and snow arrives Sunday into Monday 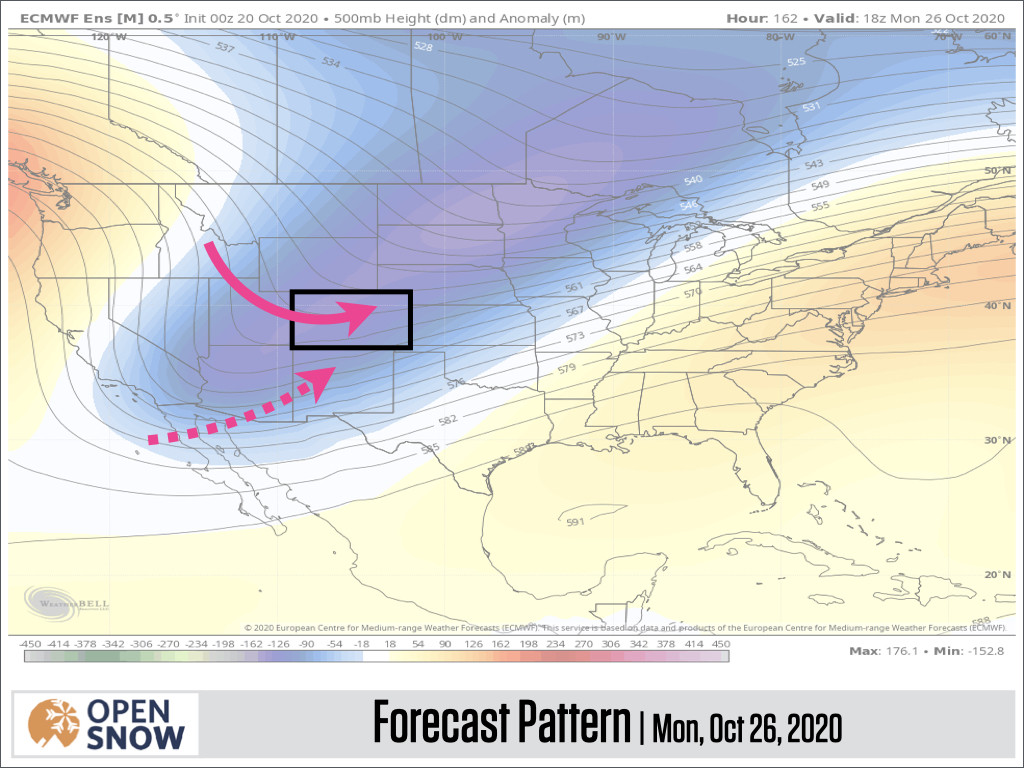 Yet another wildfire has ignited, this time in the southern mountains west of Silverton (there is currently no threat to the ski area or the town). A significant snowfall would help to reduce fire spread and risk and there is a good chance of significant snow for some parts of Colorado on Sunday into Monday, along with cold temperatures.

Looking down on our mountains from 20,000-30,000+ feet above sea level provides a wonderful perspective. We're lucky that fans of the Colorado Daily Snow appreciate this view and send me pictures from planes.

On Monday (October 19th), Chris Davenport sent me the following images of snowmaking at Keystone and Copper Mountain while flying in a commercial aircraft over to Aspen. The snowmaking piles are especially apparent at Keystone where crews are trying to 'connect the dots' down the mountain. 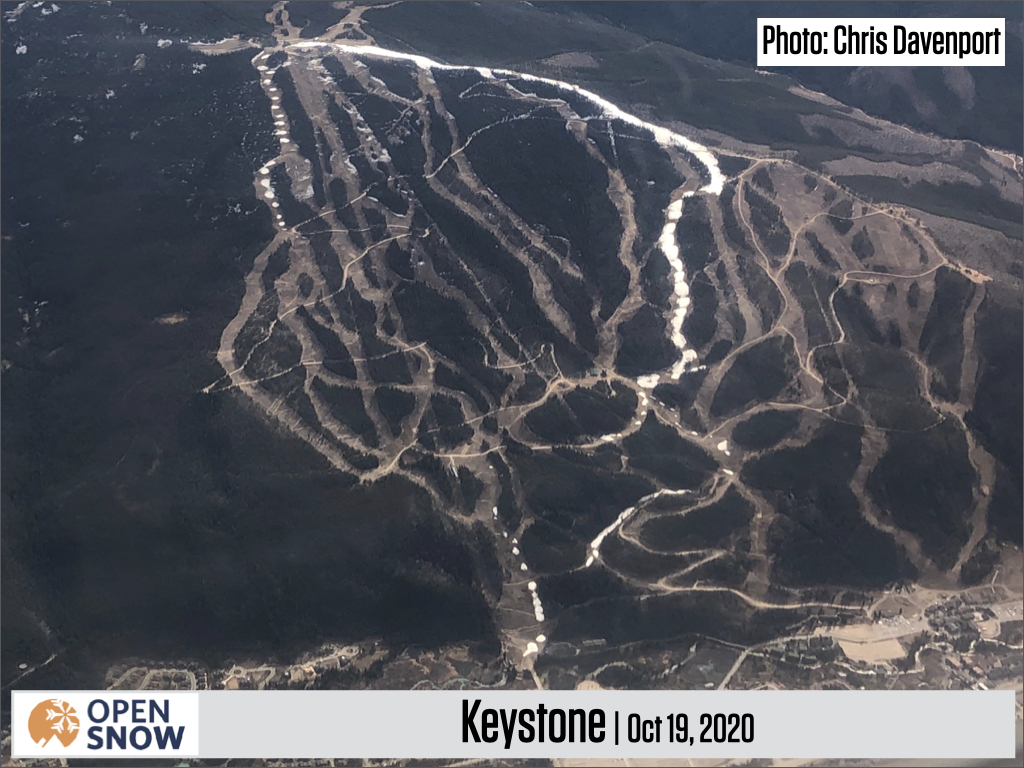 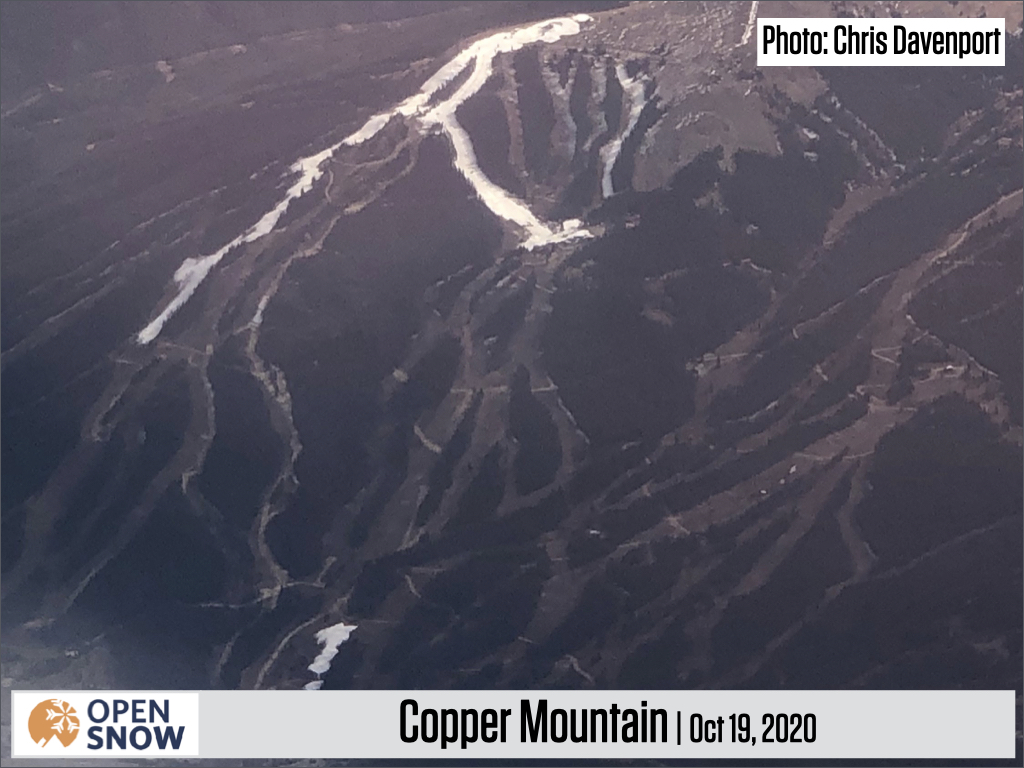 Another reader, Eric Wilson, sent me pictures of Eldora and Winter Park as his commercial aircraft took a slightly different track out of the Denver airport. 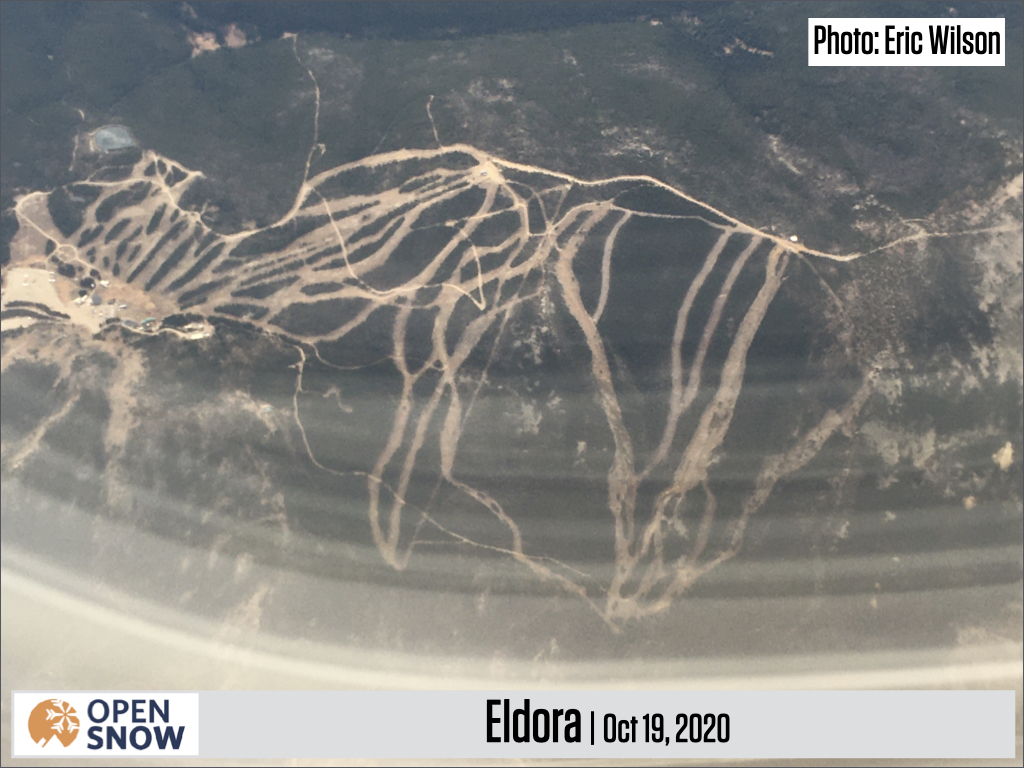 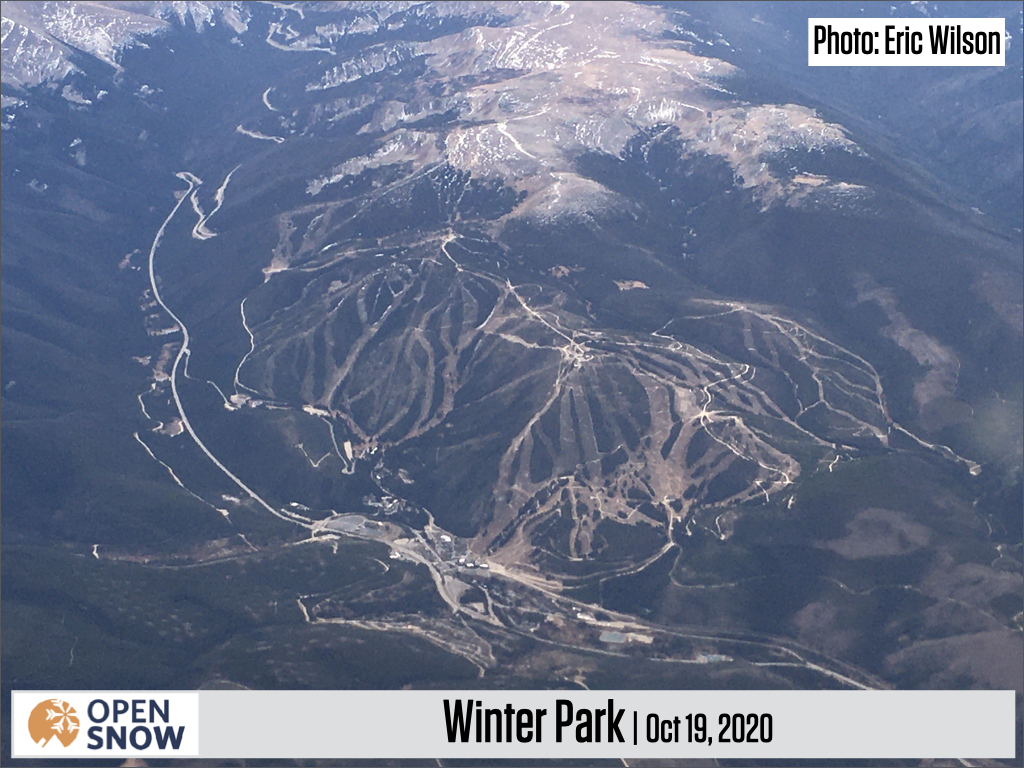 These northern mountains and hopefully all mountains in Colorado should be covered in snow in about one week thanks to two upcoming storms.

This system will brush by northern Colorado. It should cool temperatures near and east of the divide and might bring a few flakes to an inch or two of snow to the northern mountains as well. It will not be a strong system.

Storm #2 from Saturday Night to Monday

This system should make a direct hit on Colorado but there's still a trick to the forecast.

There is a high chance that a strong northern part of the storm (solid line below) should track through northern and perhaps central Colorado bringing snow from Saturday night through Monday.

The big question is if a southern piece of energy and moisture (dashed line below) can also track into Colorado, which would bring a lot of snow to the southern mountains, or if this piece of the energy might stay just a little too far south. 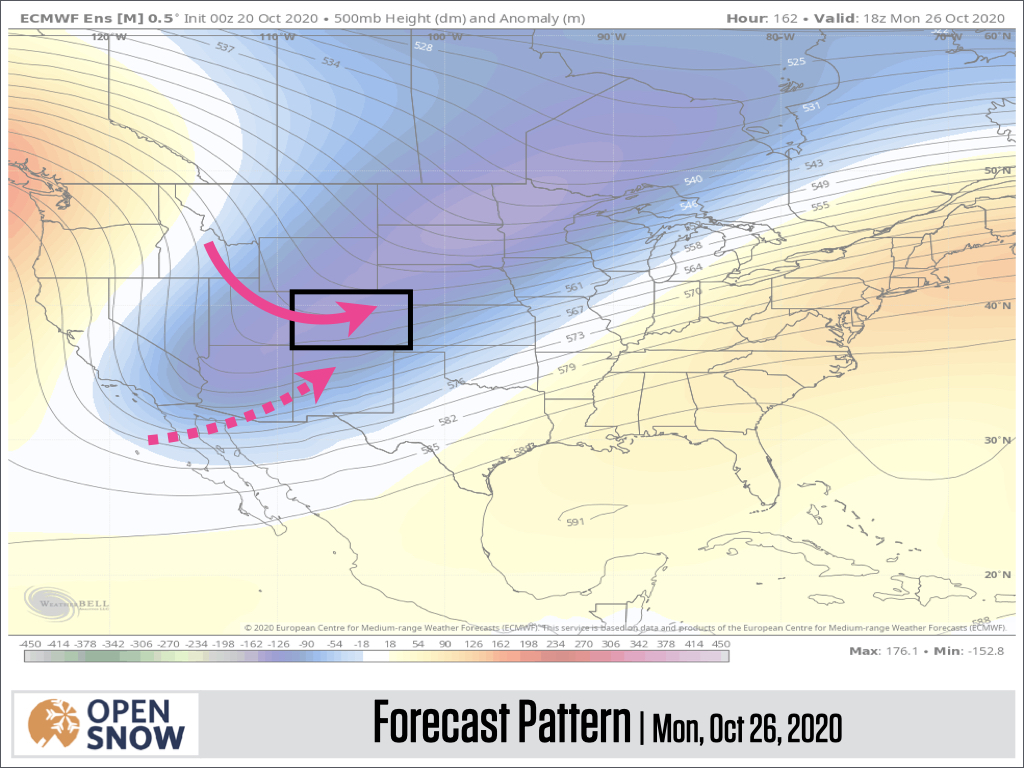 I am rooting for the southern piece of energy and moisture to track into Colorado especially because a new wildfire started on Monday afternoon in the southern mountains near the Ice Lake Basin, west of Silverton. The fire is not a threat to the town of Silverton or to Silverton Monday at this time. But the area will have gusty winds especially later in the week, and I'd like nothing more than to see double-digit snow totals from the upcoming storm to slow the spread of this and other fires.

The odds of 6+ inches of snow from this storm are pretty high, though they are higher in the northern and central mountains than they are in the southern mountains because we're not yet sure if the southern energy and moisture will track into Colorado. 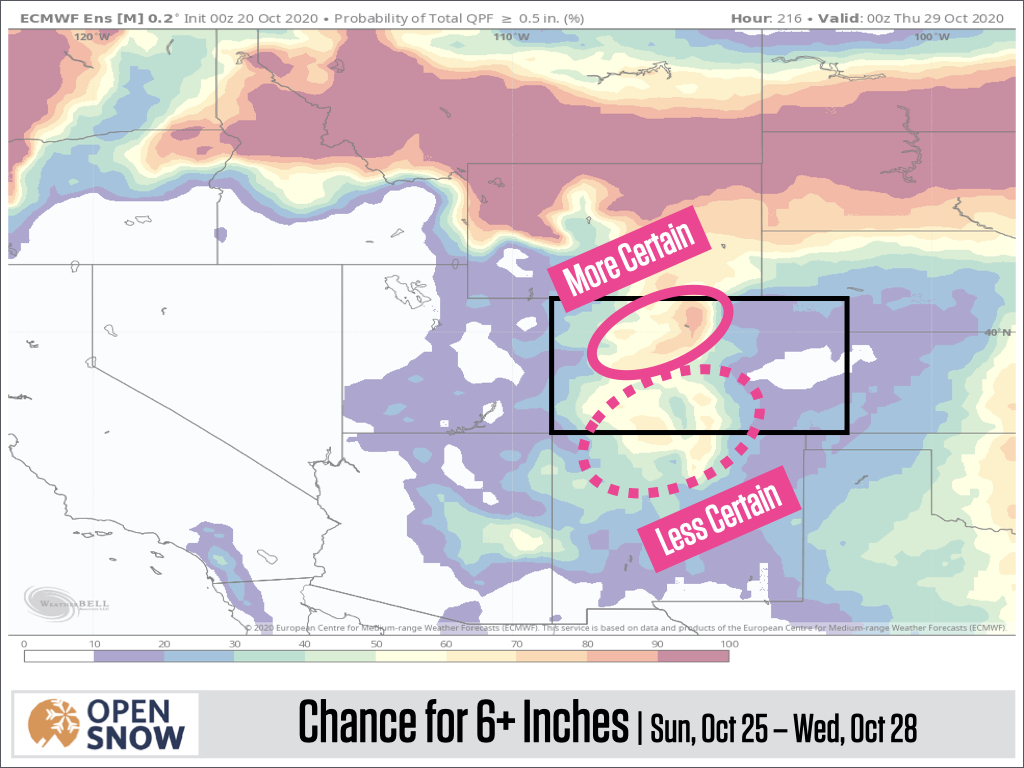 Looking at the University of Utah forecast range for the northern mountains, we see a chance for light snow on Thursday night, and then some big numbers are showing up for Sunday into Monday, perhaps 12+ inches. I'm not jumping on the double-digit-snow-total-bandwagon just yet, and these numbers are skewed high due to the Canadian model being much more aggressive with snow totals. Still, I am letting myself get a little excited about this storm. 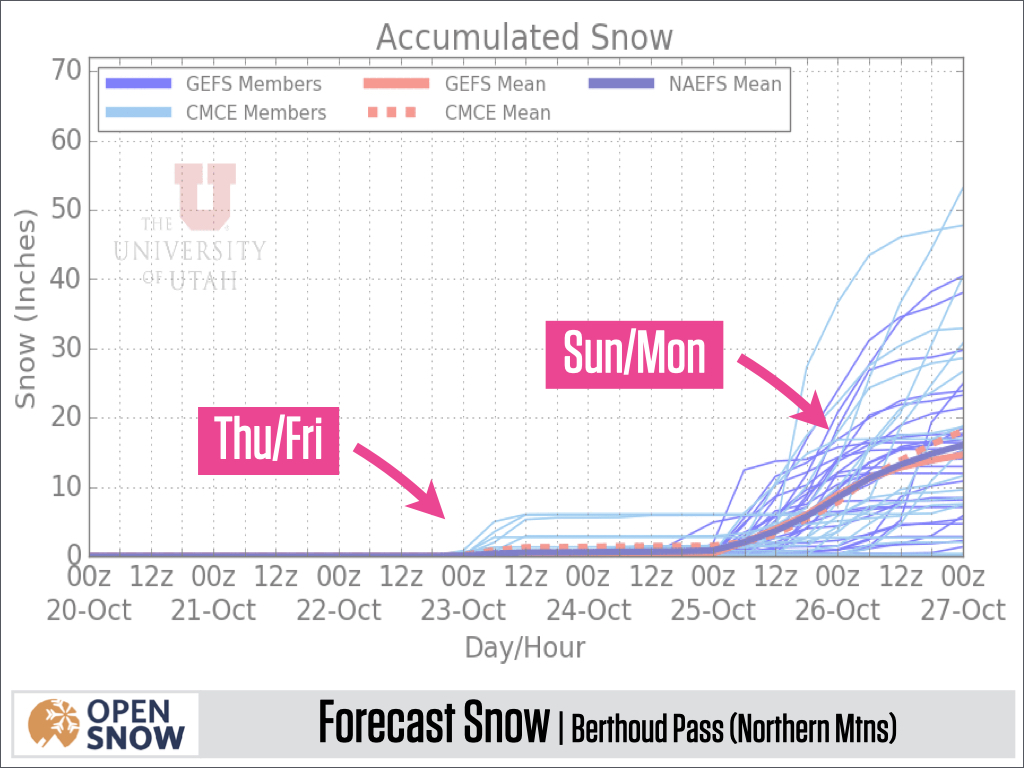 The University of Utah forecast for the southern mountains also shows a large range of outcomes. Don't just focus on the thick lines, which are the averages. The thin lines also are worthy of attention because any of these lines (or lines that don't exist on this image!) could be the true outcome of the storm. 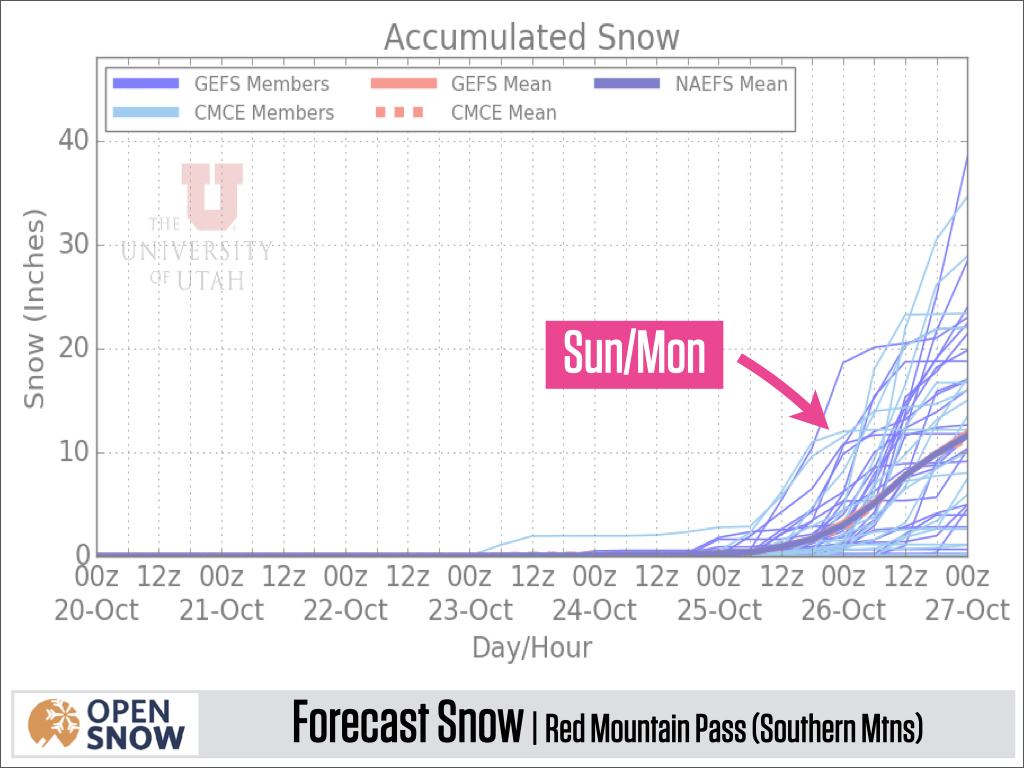 The summary of the upcoming storm is that we'll see much colder air on Sunday into Monday with highs on Monday perhaps in the teens and 20s and the potential for significant snow across the state with higher odds for the northern mountains and lower odds for the southern mountains. Fingers crossed that this storm delivers a LOT of snow which will help to reduce the spread of current wildfires and the risk of future wildfires.

The forecast for the last few days of October and into early November looks like it will trend back to warmer and drier weather.

I also do not see any solid signs of storms in early November. That doesn't mean our forecast is guaranteed to be dry, I just don't see a strong signal looking beyond the upcoming storm on Sunday into Monday.