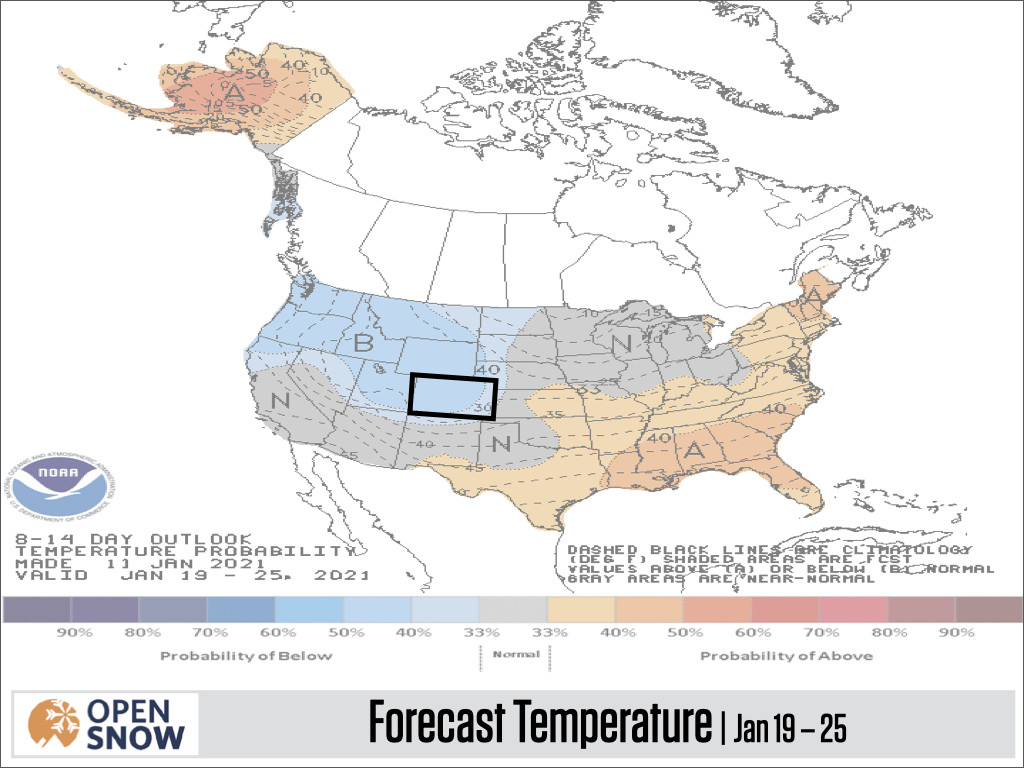 Monday was a gorgeous day across all of Colorado with mostly sunny skies.

Tuesday is starting just like Monday morning with temperature inversions across the state, meaning that lower-elevation valleys are much colder (below 0°F in some cases) while the mid-and-upper parts of mountains are sitting around +10°F to +20°F. These inversions will break by late morning and the rest of Tuesday will bring comfortable temperatures in the 20s and 30s and at least partly sunny skies with some high, thin clouds filtering the sunshine at times.

Wednesday will be a transition day as we'll start to feel the upcoming storm. Temperatures will be warm, in the 30s, but we'll see more clouds, and winds will start to become strong and gusty by the afternoon and evening.

Wednesday Night to Thursday Night will be when the next storm brings snow and strong winds to the northern and central mountains. Snowfall should be at least a few inches for the northern mountains, starting Wednesday evening and continuing through Thursday midday. We will be right on the edge of the jet stream and this might mean that we'll see a few narrow bands of more intense snow (you can see a hint of these bands stretching from west-northwest to east-southeast on the image below). 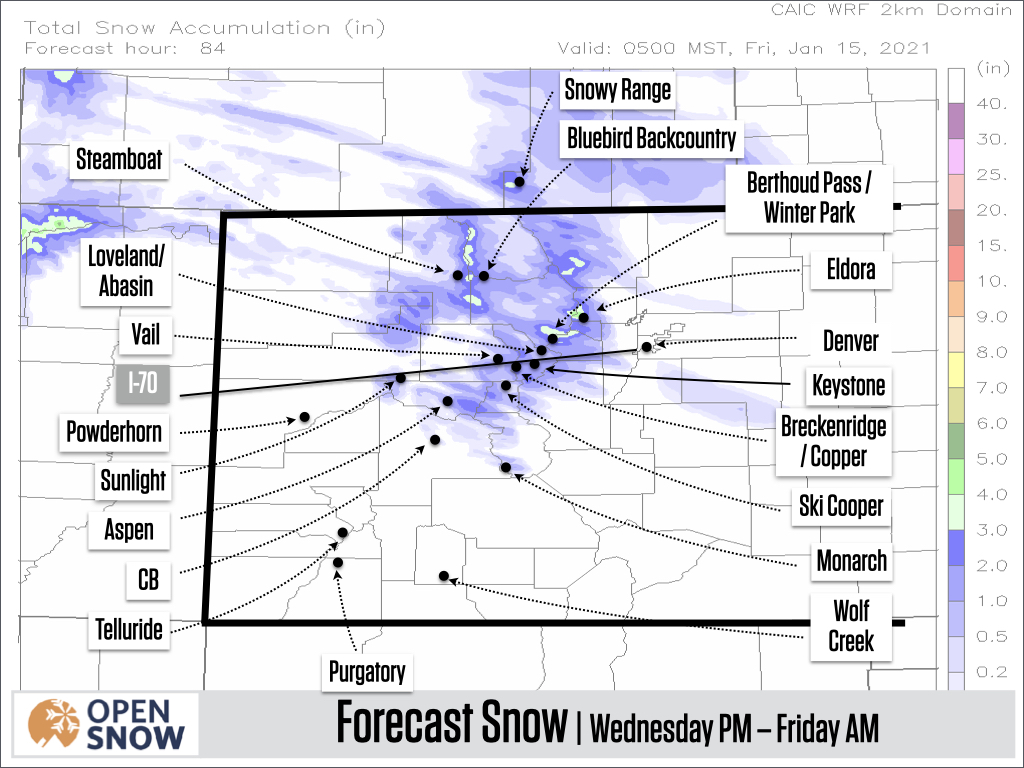 While some snow will fall on Wednesday night and Thursday, the more important story will probably be the strong wind gusts which could hit 40-60mph. These wind speeds will be most noticeable at exposed peaks in the northern and central mountains and could slow/stop lifts at times on Thursday.

Friday should be a brief period of drier weather between storms, though the northern divide could still see gusty winds during the day and maybe lingering snow showers along the divide.

Saturday into Sunday will be our next storm. This system will once again favor the northern mountains and snow amounts should be a little higher than the Thursday system, maybe in the 2-6 inch range. Snow should begin on Saturday morning and may continue all the way through Saturday night, which could set up Saturday's last chair or Sunday's first chair with soft conditions.

We are going to stay on the edge of the storm track early next week, and the latest models predict that this is a good thing and could lead to one or two storms around Monday, January 18th, and Tuesday, January 19th. Both of these potential systems should once again favor the northern mountains.

And then as we look into the end of next week and early the following week, we see something on the outlook maps that we have not seen in a long time – odds favoring colder than average temperatures and more than average precipitation. What? This can't be! Seriously? Amazing! 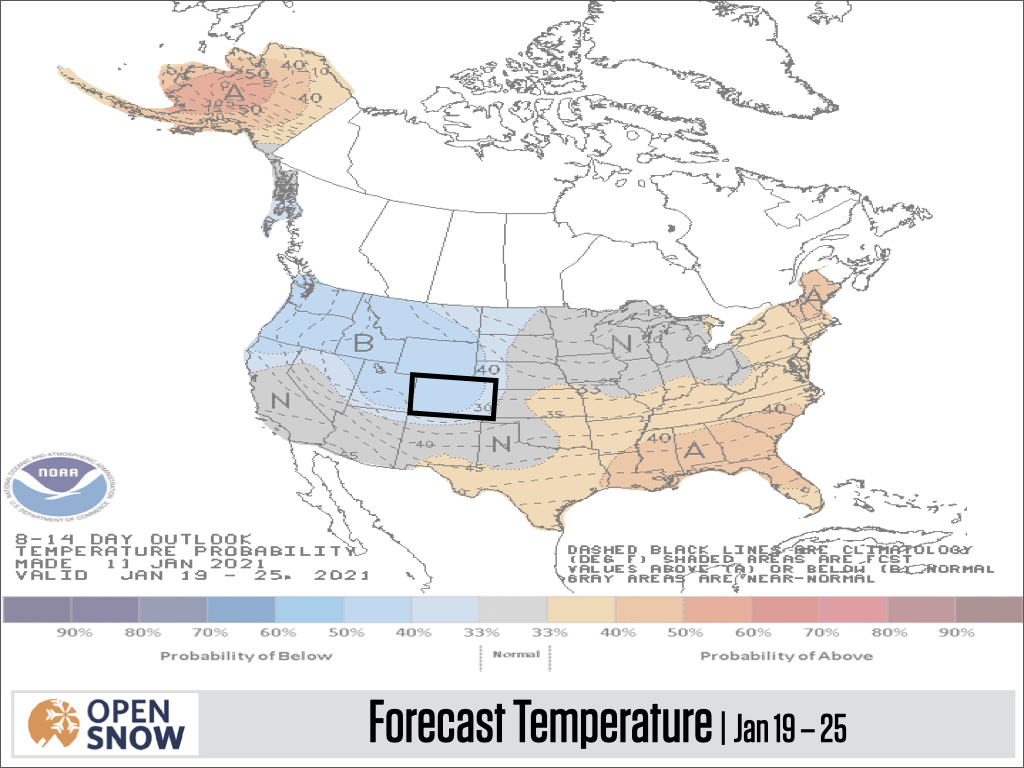 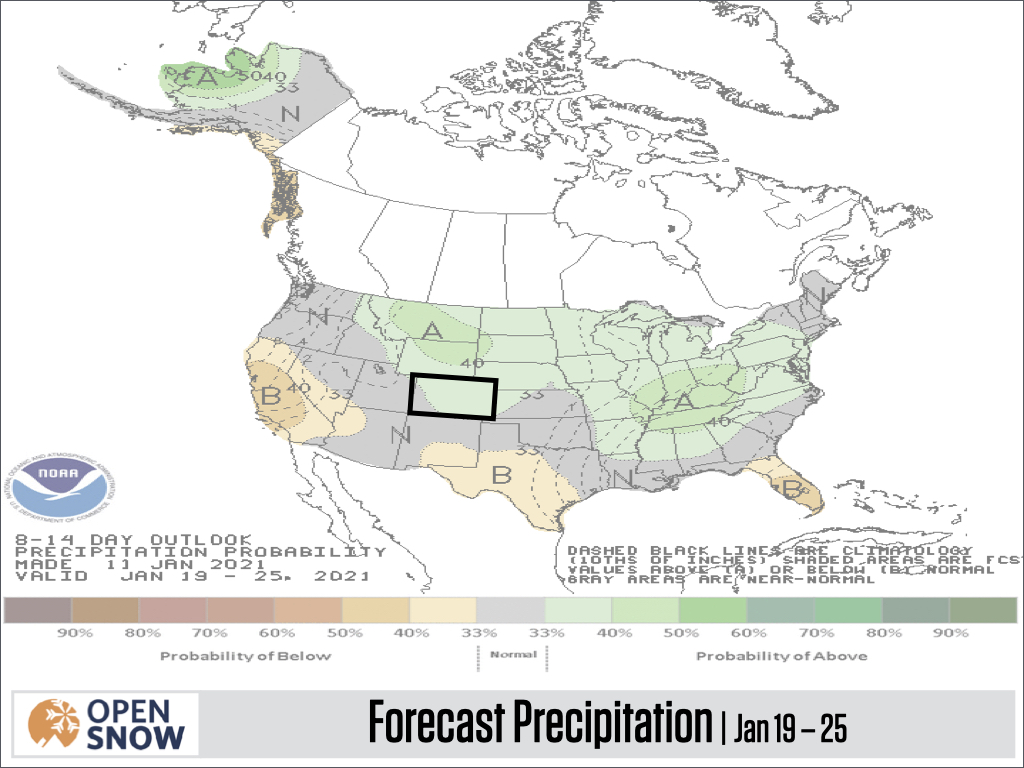 This potentially colder and stormier period toward the end of January is still too far away for us to confidently talk about the timing of individual storms, but my first estimate is for a potential storm around the 21st and another one around 25th, plus or minus a day or two for each system.

Like I've said all season, these predicted shifts toward a more active (stormy) weather pattern over the Rockies and the West Coast do not always lead to big snow here in Colorado. We'll wait and see (and hope) that the atmosphere will treat us kindly with a few storms that make a direct hit on Colorado. We could use it! 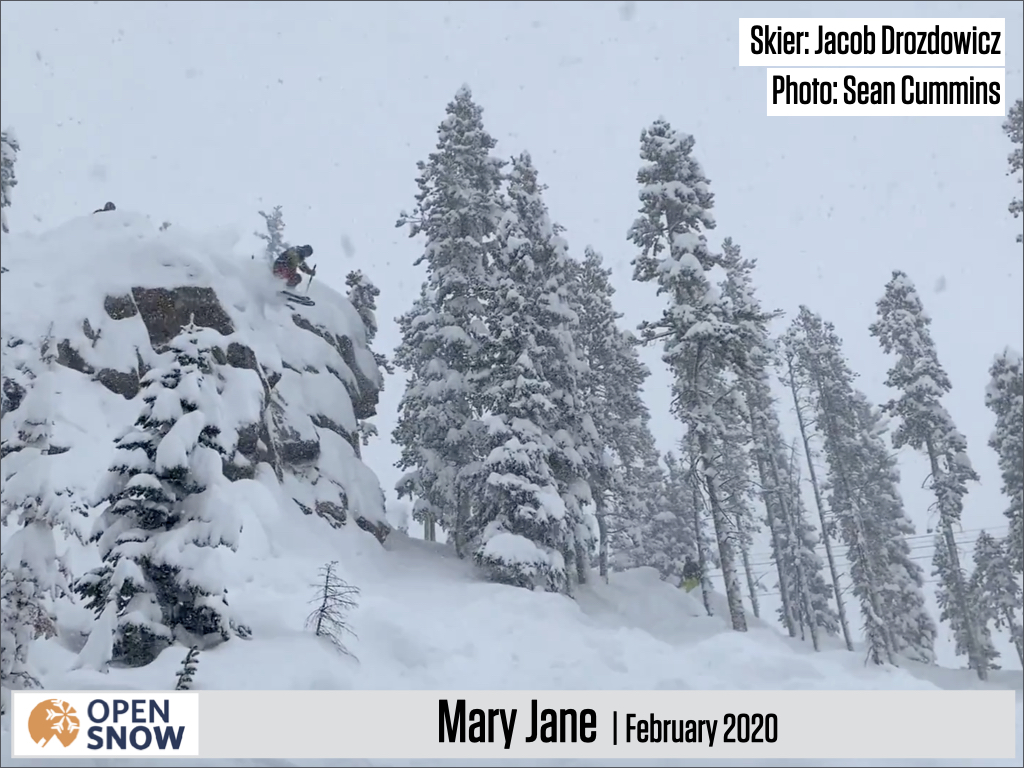 In addition to the Estimated Snow Depth, Current & Forecast Radar, Temperature Forecast, and Avalanche Forecast maps, we now have a Wind Gust map layer on OpenSnow!

This high-resolution map overlay provides forecasts for the next 18 hours and is available to All-Access subscribers on any device by clicking the "Maps" tab and selecting the "Wind Gust" overlay.

The data will update every hour with the latest available information.

For the OpenSnow iOS app, make sure you're updated to v3.5.3

For the OpenSnow Android app, make sure you're updated to v3.5.4

View all of our map overlays on any device by upgrading to All-Access for $29.99/year (Single) or $39.99/year (Group). The subscription includes unlimited Daily Snow reads, 3-day hourly forecasts, 10-day snow forecasts, and much more.