Next storm on Wednesday night 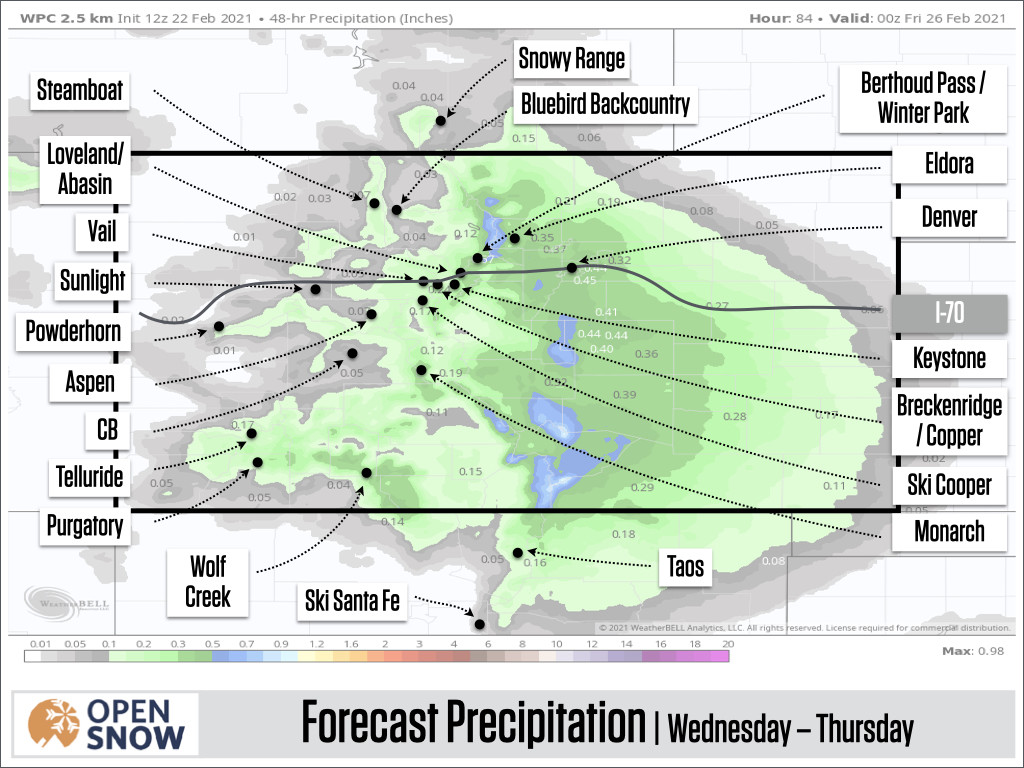 Monday and Tuesday will be dry. On Wednesday, showers will increase during the afternoon, then on Wednesday night into Thursday, significant accumulations of 5-10+ inches could fall for areas mainly east of the divide and in the far southern mountains, with powder likely on Thursday. From Friday through the weekend, all mountains could see periods of snow with light or moderate accumulations.

On Sunday, snow showers lingered mainly over the northern mountains. Moisture was limited and temperatures were cold, and this combination only allowed the atmosphere to produce an additional coating to one inch of snow for most mountains. The exception was at Steamboat where 3-4 inches of fluffy snow fell early on Sunday morning and that made for a wonderful powder morning.

Now on Monday, conditions are dry across the state though clouds continue to cover the northern mountains. The satellite image below uses a blue color to show lower clouds, and there is plenty of blue over the northern part of the state. I highlighted the low clouds with a pink dashed circle, and the yellow color shows areas of human-created light from cities. 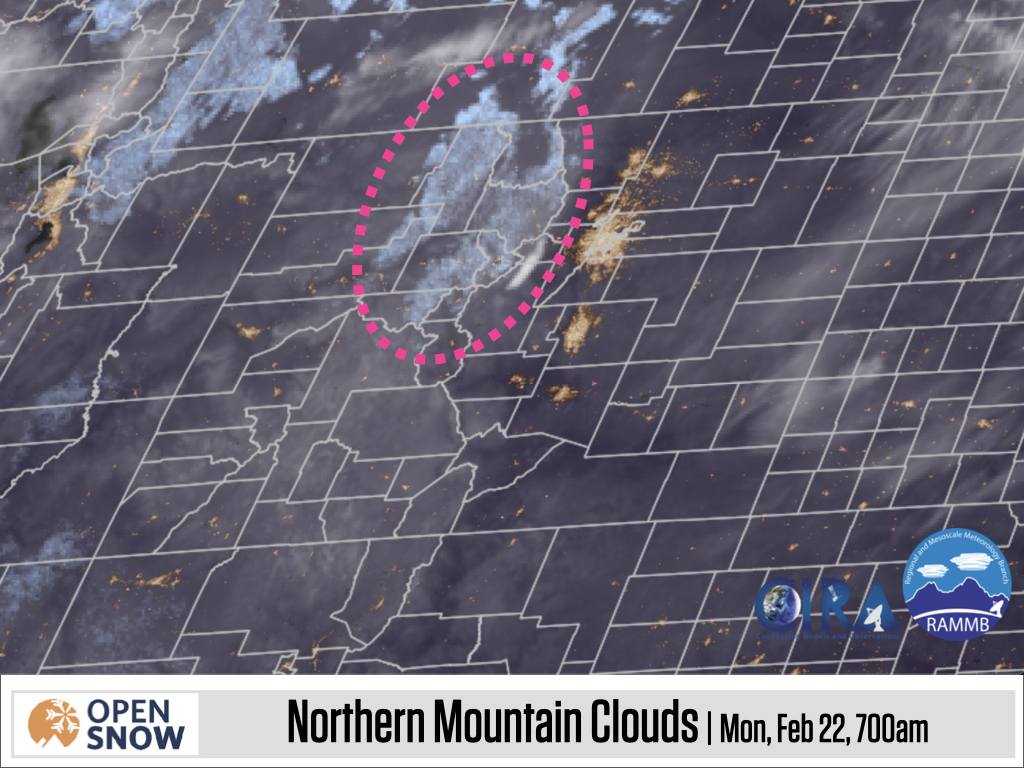 Cams over the northern mountains confirm the low clouds. 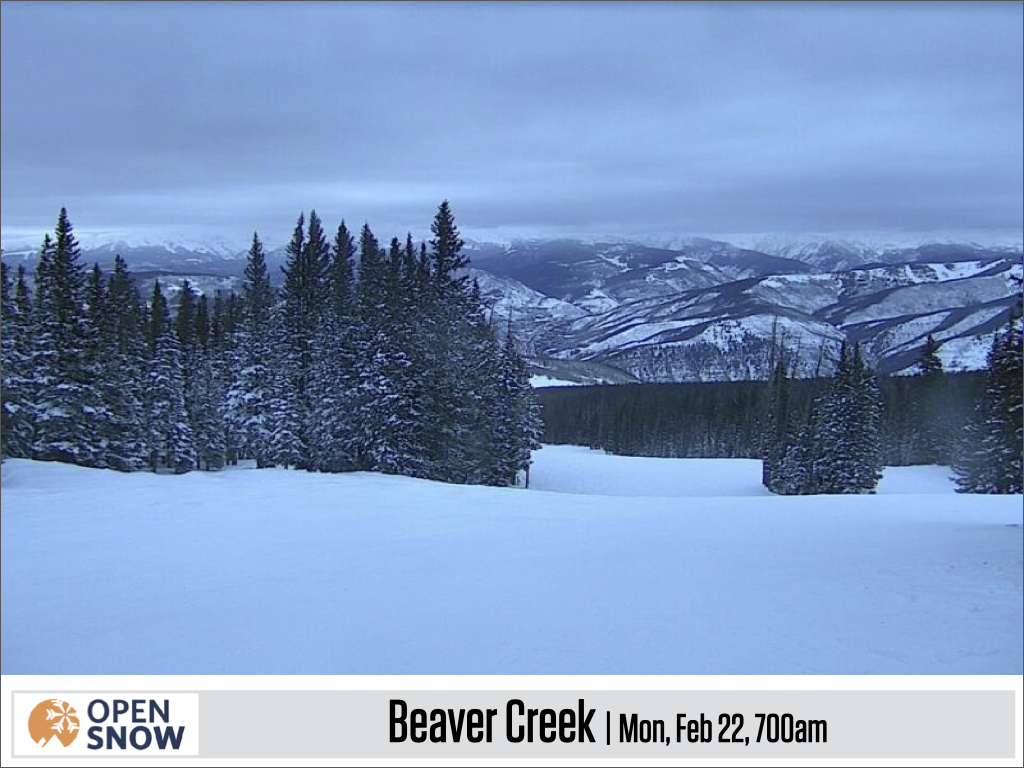 Of course, lower clouds are not an especially exciting part of the weather forecast, but it is fun to use modern satellite technology, from a satellite that is about 22,000 miles from earth, to figure out what conditions are like if you're making turns early this morning.

The forecast on Monday and Tuesday is for dry weather. The low clouds on Monday morning may hang around some northern mountains throughout most of Monday. Then on Tuesday, all mountains will see sunshine.

On Wednesday, the next storm will bring showers later in the day, then most of the snow will fall on Wednesday night into Thursday midday. The deepest accumulations will occur near and east of the divide with 5-10+ inches falling in areas that are in blue and dark green on the map below. 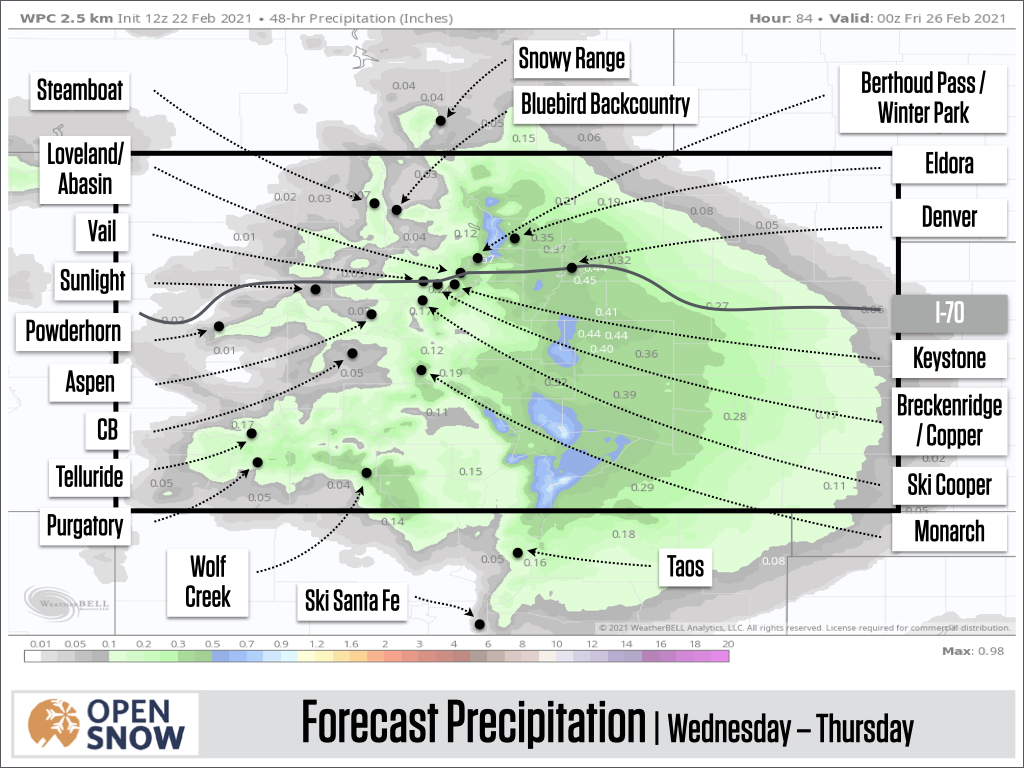 Areas east of the divide will benefit from the combination of a favorable wind from the east and the jet stream moving overhead. Other non-eastern mountains could see lighter snow accumulations.

It looks like Thursday will be a powder day east of the divide and also potentially over the southeastern San Juan mountains. Again, 5-10 inches for these areas looks like a good forecast, and non-favored mountains could see just a coating to a few inches of snow.

The next storm will affect our weather from Friday through Monday (February 26 to March 1). This storm will take a track around Colorado rather than through Colorado and this should limit snow accumulations.

Below is a series of forecast images showing the track of the storm each day from Friday to Monday. 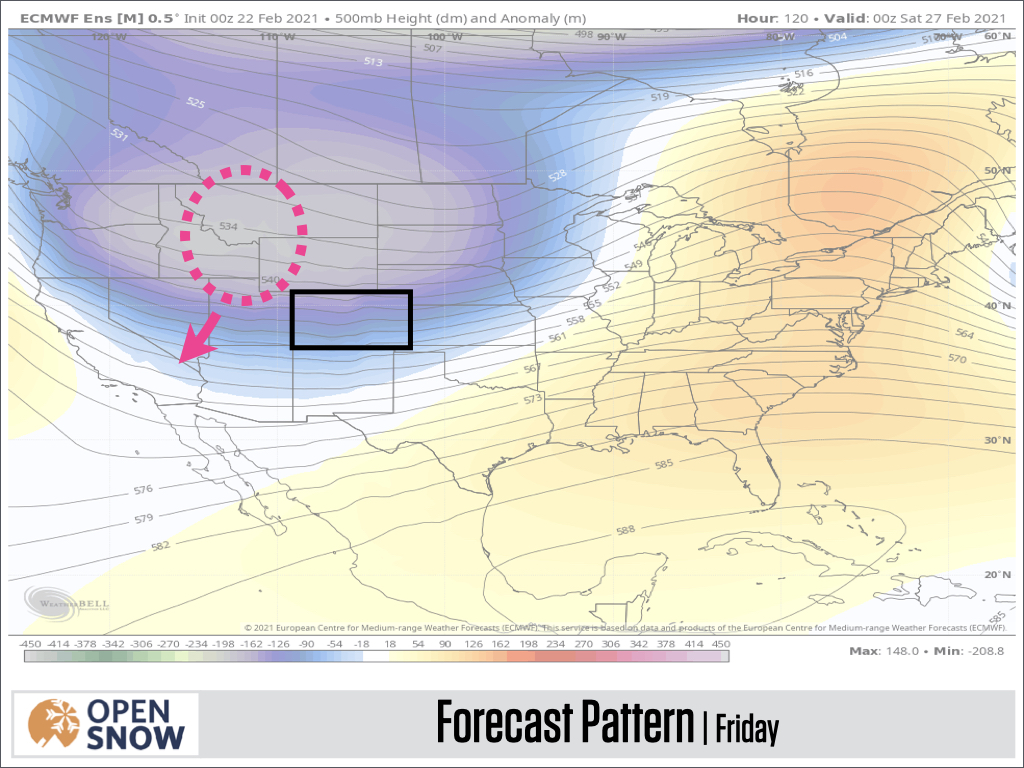 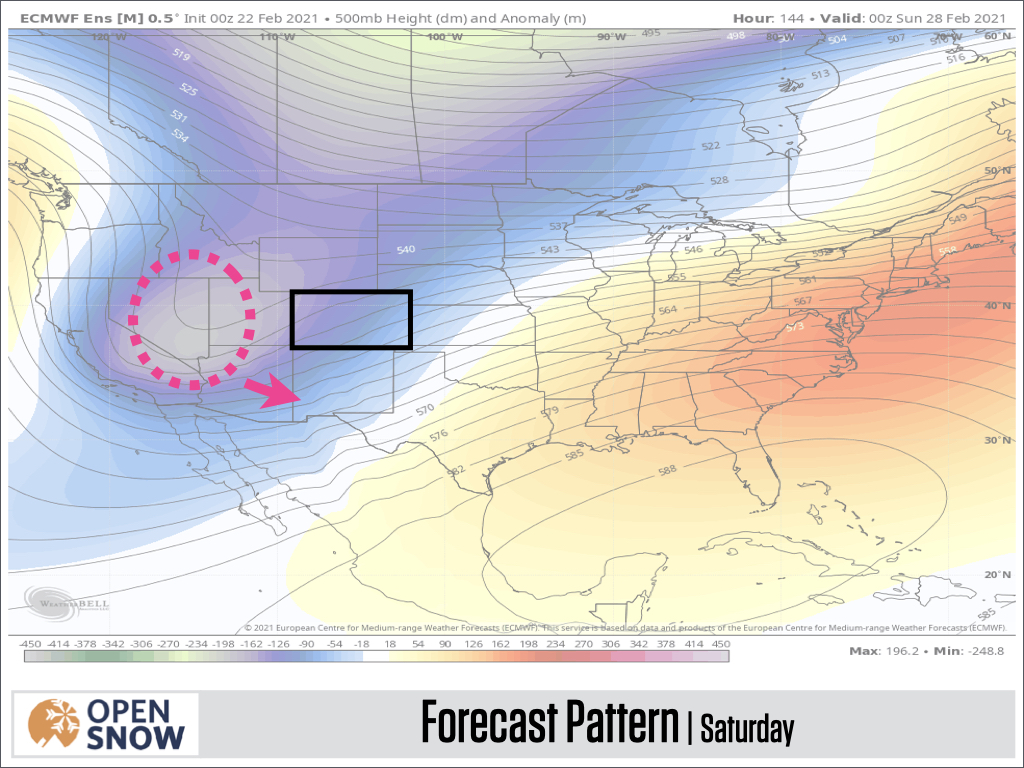 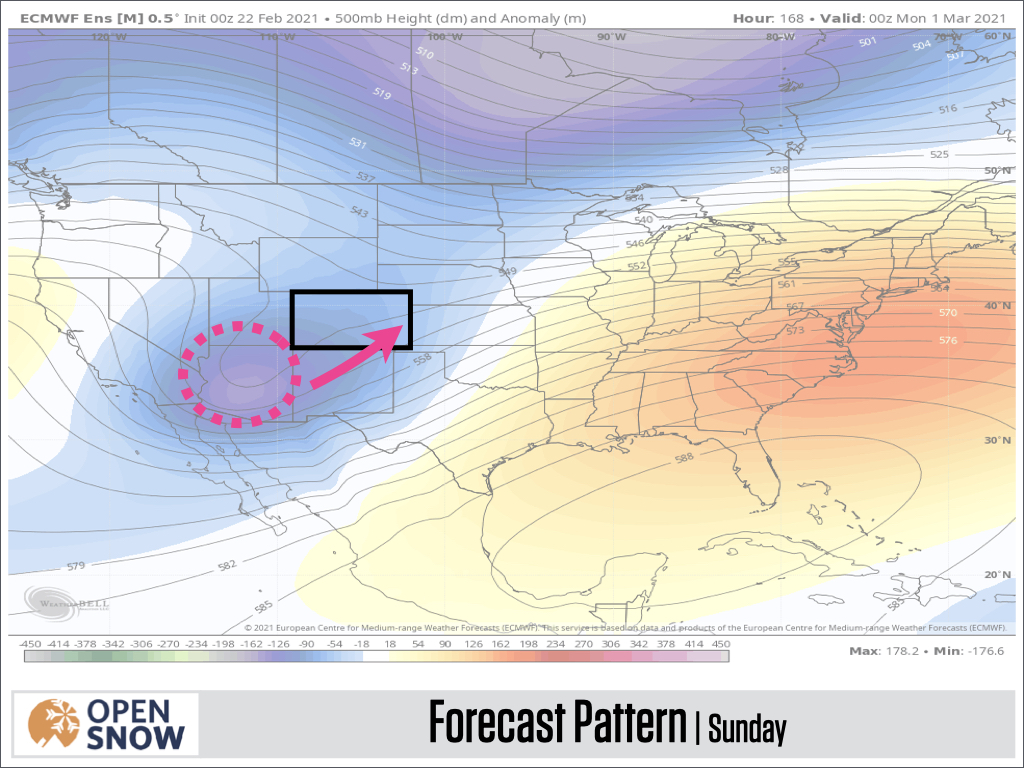 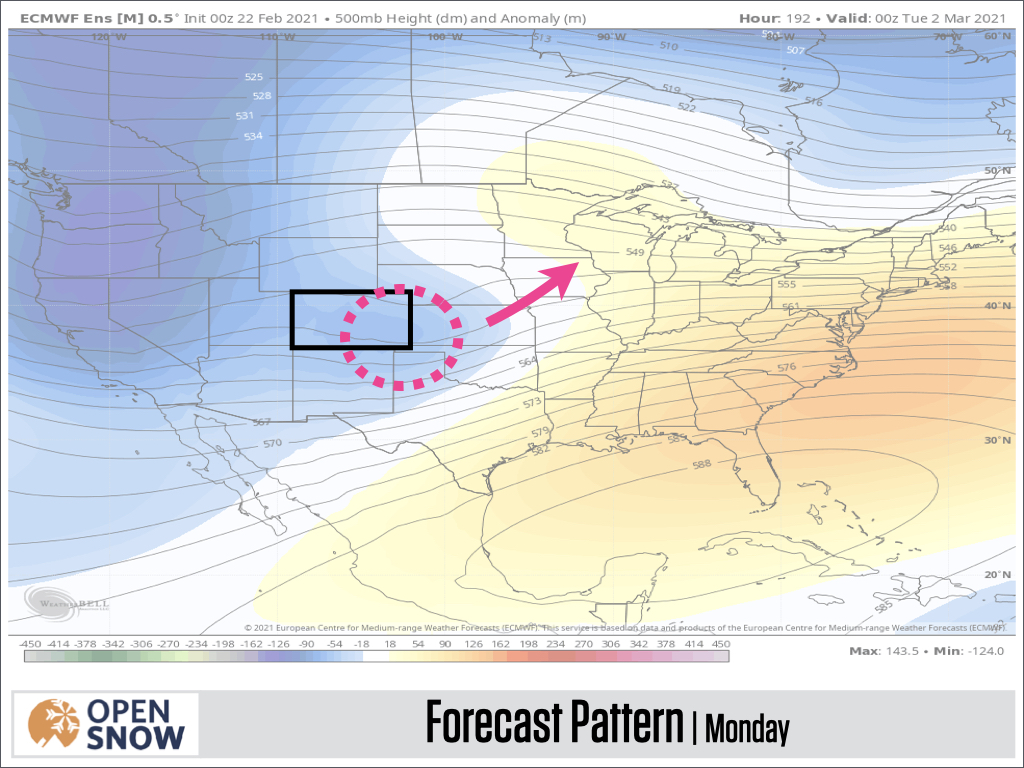 While the track of the storm does not look like a good one for big snowfall, we may still do ok as the storm moves around Colorado. Friday could bring some accumulations to the northern mountains, then later in the weekend, snowfall could favor the southern and eastern mountains. This weekend storm is a perfect situation for keeping expectations low and being ready to enjoy deeper powder if we get lucky and the storm tracks in a bit more of a favorable way.

Looking far ahead into early March, it appears that there could be a storm around March 3-4, and beyond that, it's just too far out to pinpoint any date ranges for the next system.

P.S. See the "Announcements" section below for our latest feature update!