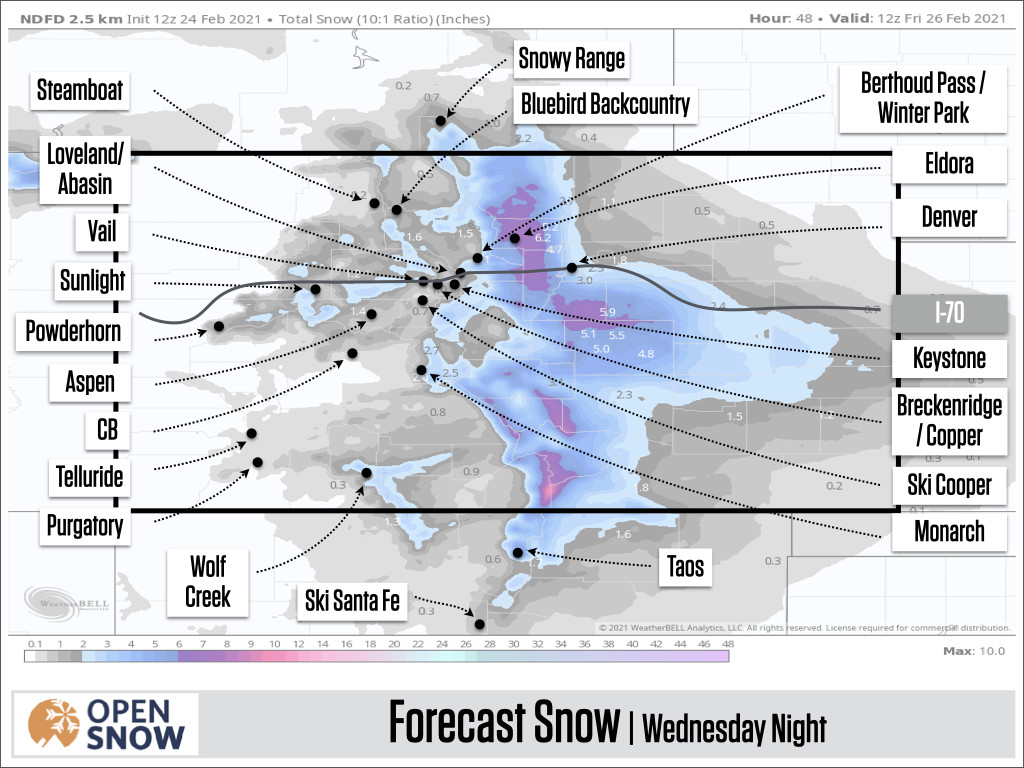 Wednesday will be dry. On Wednesday night, a storm will bring 3-10 inches of snow to areas near and east of the divide with 0-3 inches west of the divide. Thursday morning should offer fun powder for eastern areas. The next storm will bring snow on Friday, Saturday, and maybe beyond, but I still have little confidence in which mountains could see the deeper totals.

Tuesday was a sunny day across all of Colorado and high temperatures felt warm as they reached 30-40°F.

On Tuesday night, a few northern mountains actually saw accumulating snowfall when a weak and fast-moving piece of energy moved over the state. The snow stake cams at Arapahoe Basin, Breckenridge, Copper, Keystone, and Loveland all show a coating to an inch.

Now on Wednesday morning, we are back to sunny and dry weather across the mountains with gorgeous views from the upper elevations. 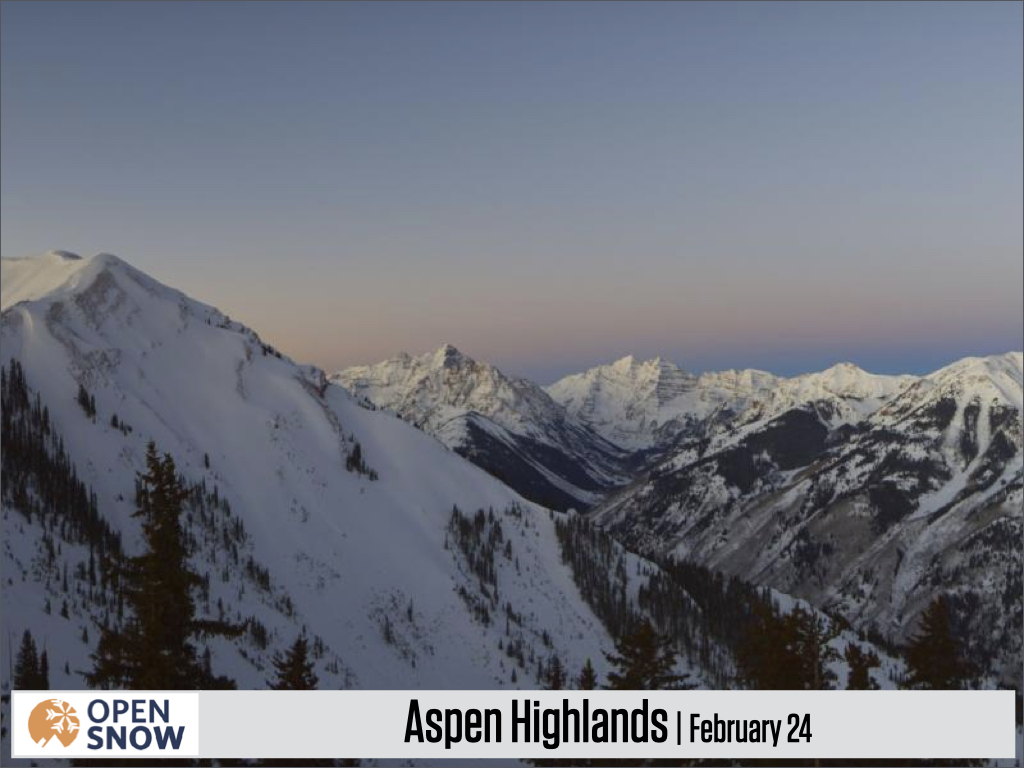 Most of Wednesday will be dry, but areas near the divide will see more clouds and showers begin later in the day and around sunset.

Wednesday night is when we will see our next chance for snow. All systems are 'go' for this storm and there have been no substantial changes in any of the models during the past day.

For most mountains, this will feel like a non-storm with just a dusting to 2-3 inches of snow in a few lucky spots.

For areas along and just east of the divide, like Cameron Pass, Rocky Mountain National Park, and Eldora, snowfall could be 3-7 inches.

For the higher foothills, east of the taller peaks and west of the low-elevation plains, there could be deeper totals of 5-10 inches.

Below are two forecast maps. 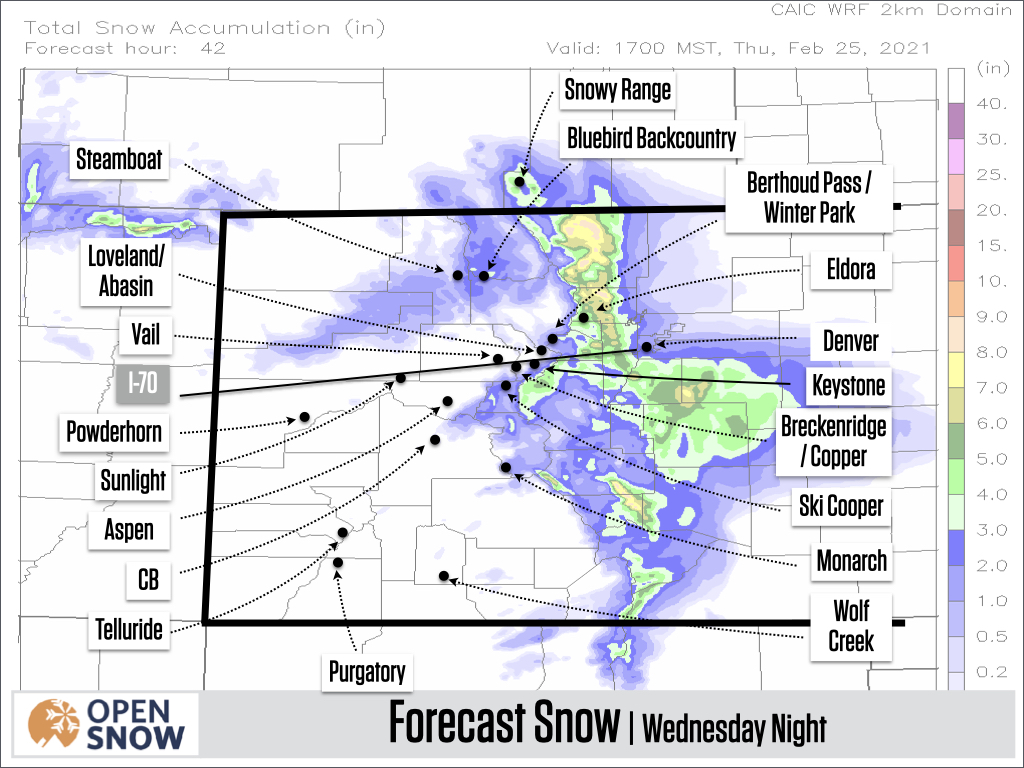 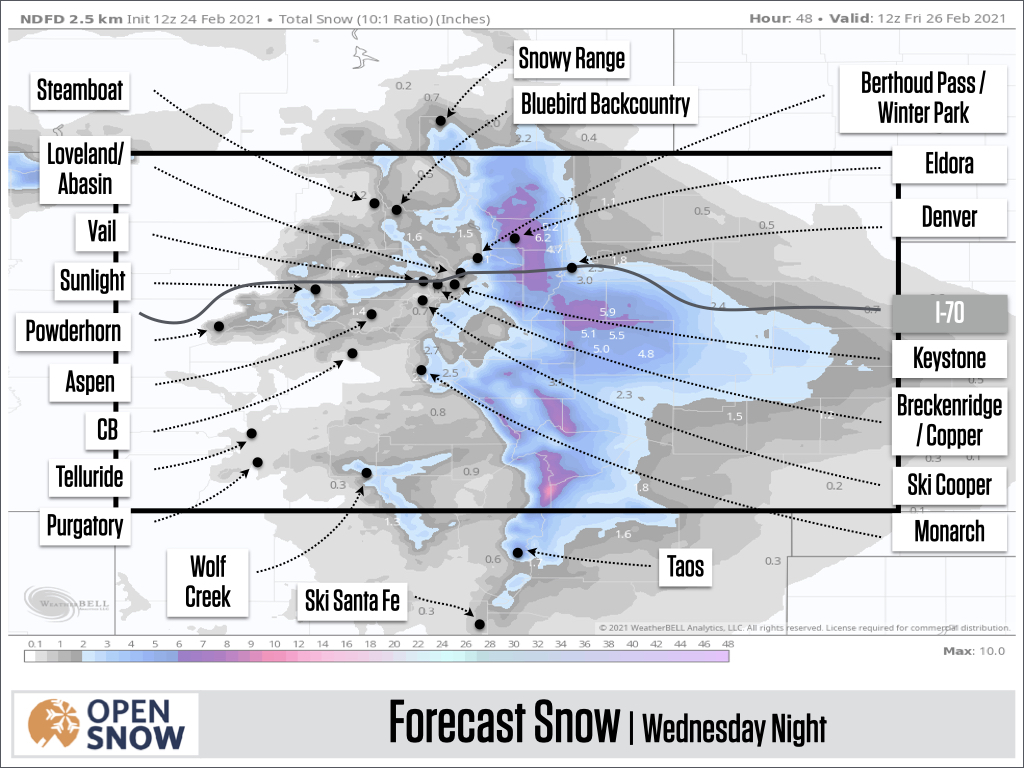 In both images, you can see that the deeper snow totals show up between the urban areas to the east and the highest peaks along the divide. This bullseye along the higher foothills has been shown in all forecasts for days and likely results from the favorable east wind not extending that high into the atmosphere, which would keep the maximum lift over the foothills and not in the higher elevations along the divide above 11,000 feet.

The bottomline is that the best chance to ride fresh snow this week will be on Thursday morning and generally east of the divide.

On Thursday, snow should taper off for most areas by morning but maybe hang around through the midday for far southern areas like around Cuchara and the eastern San Juans and the Sangre de Cristo mountains.

The forecast for Friday through Monday is still a mess in terms of trying to figure out the details. There will be a storm during this time, and snow will fall, but I still have very low confidence in the timing or the amount of snow.

On Friday and Saturday, the latest forecast models show pieces of energy and snowfall moving over Colorado with light to moderate accumulations, and perhaps we could see some powder and soft snow by Saturday.

On Sunday and Monday, it's possible that the storm could dive too far south and take most of the snow with it, or additional pieces of energy could keep the snow going.

Keep low expectations for snow during the weekend, but if a few things come together, some mountains could actually see decent totals and fun riding. I'll keep you posted.

Looking into March, while there could be storms around March 2, March 4, and March 8, none of these systems appear significant at this time. A few of the longer-range models hint at a stormier pattern setting up along the west coast closer to the middle of the month, and maybe that active weather will trickle east into the Rockies. Yup, that's a lot of speculation. For now, I am keeping my expectations for snow pretty low and hope to get more clarity over the next week or so.