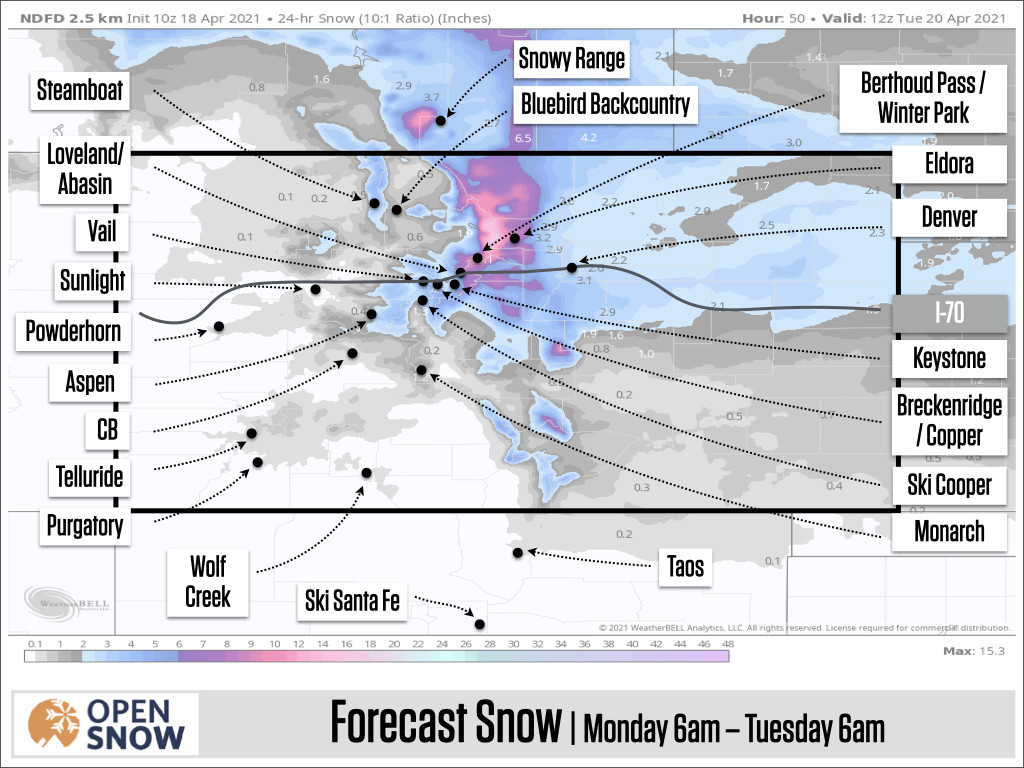 Sunday will be dry and sunny, and Monday morning will be the same. Then a strong and fast-moving storm will bring snow from Monday afternoon through Tuesday at sunrise with double-digit accumulations east of the divide and near and north of I-70, with lower totals elsewhere. On Wednesday, Thursday, and Friday, snow showers will continue. Then we'll see mostly dry weather on Saturday and Sunday.

Saturday was showery for many mountains with 1-6 inches accumulating generally near and east of the divide and over the southern mountains.

Sunday will be a gorgeous day with sunny skies and high temperatures in the 30s. Sunday is closing day for a few more resorts across Colorado and it'll be a beautiful final day of the season for these spots.

Monday will start off dry and mostly sunny. During the middle of the day and early afternoon as the storm approaches, winds will be strong with gusts of 35-50mph. Then on Monday afternoon, snow will begin to fall over the far northern mountains.

Monday night is when we'll see the most intense snow, between about 6 pm Monday and 6 am Tuesday. Storm energy will be strong, the jet stream overhead will force additional rising air, and temperatures should be in the right zone for efficient snowflake production and potentially fluffy snow.

The forecast map below is the multi-model average showing double-digit amounts near and east of the divide and near and north of I-70 with about 3-6 inches for areas just a bit farther to the west. 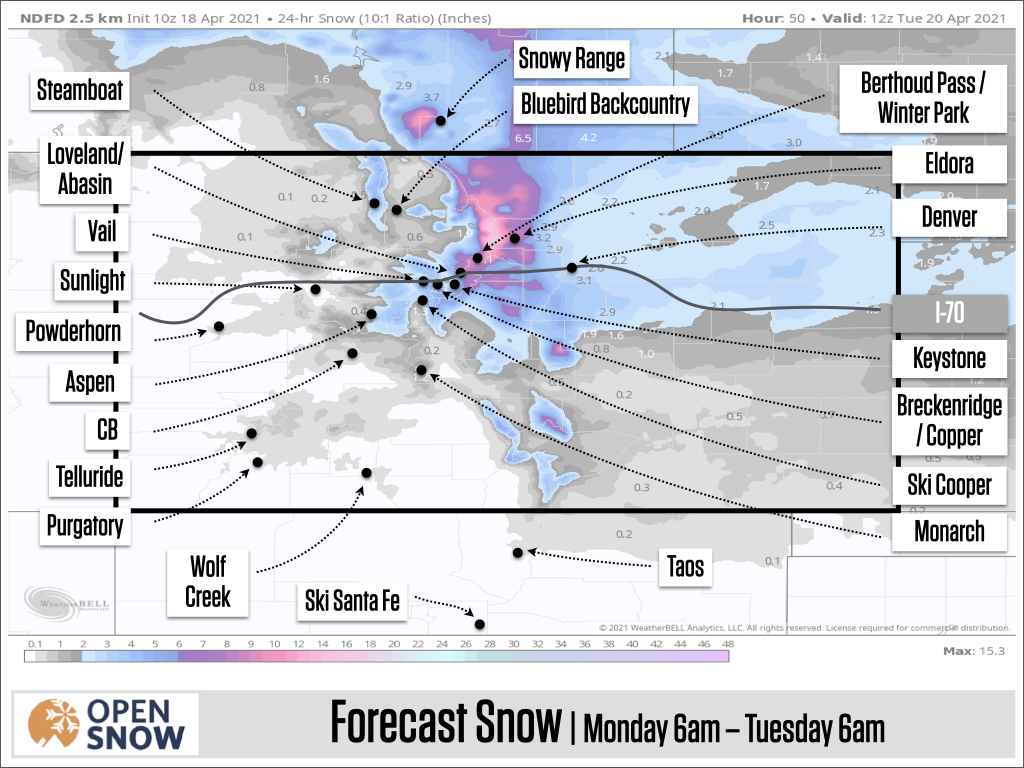 Interestingly, the CAIC WRF 2km model below, which is based on other models (HRRR 3km and NAM 12km), shows the most snow falling east of the divide with much less snow along and just west of the divide. 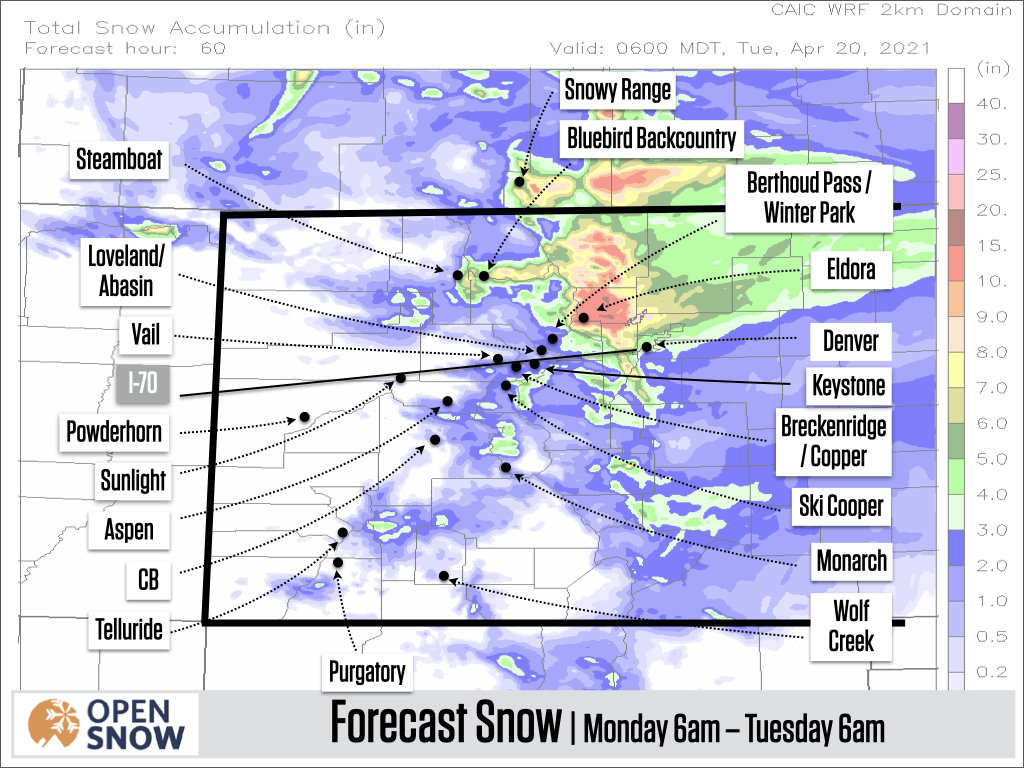 Since many of the ski areas that will remain open are near and just west of the divide (Winter Park, Loveland, Arapahoe Basin, Breckenridge, Copper), the nuance of the forecast for this area near the divide is pretty important.

Two weeks ago, the multi-model average forecast was much more accurate than the HRRR / CAIC forecast in a similar situation as this one, so I am leaning toward a repeat with snow totals more closely resembling the first graphic and not the second graphic. I think the reason that sometimes the multi-model average forecast is more accurate in certain situations is that it better captures the large-scale flow of the atmosphere, including the storm energy and the jet stream, because it incorporates models that cover the globe.

The bottom line is that Tuesday morning should bring a good chance for powder with moderate totals (~3-8 inches) near and west of the divide and double-digit totals likely east of the divide.

Tuesday's weather will be dry though there will be fresh snow in the morning for many northern and eastern areas thanks to the snow on Monday night.

Wednesday, Thursday, and Friday should bring additional snow showers with 3-6+ inches of accumulation over the northern and central mountains. This should keep conditions somewhat soft and fun though it's too soon to know if any of these days will offer deeper fresh snow. 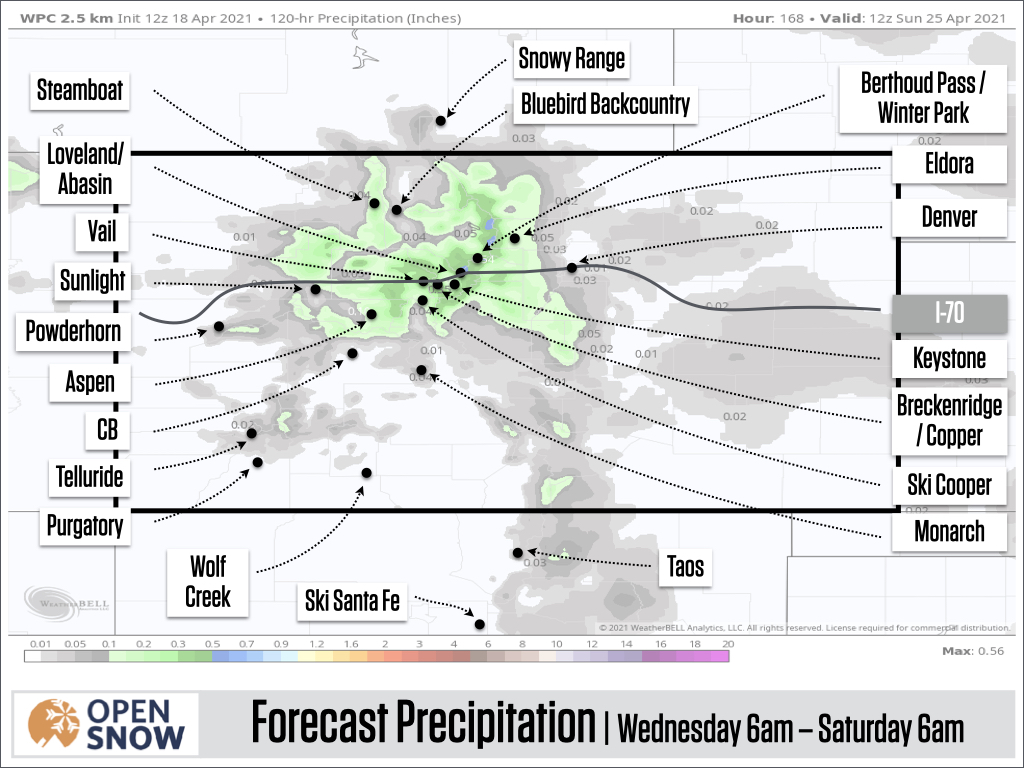 Looking far ahead, there should be at least one more storm around April 27-28 (ish), and then the longest-range models show another potential storm during the first week of May.