Flash floods are one of the most underrated weather hazards and kill more people annually in the United States than any other weather hazard. Flash floods can occur anywhere, and mountain, desert, and canyon environments featuring complex topopgrahy can be especially vulnerable when the conditions are right.

What are Flash Floods and Why are they Dangerous?

A flash flood is a flooding event that occurs within 6 hours of heavy rainfall, and often within 1-3 hours or less. Flash floods result in a rapid rise in water over low-lying areas, and can occur over previously dry terrain or in the form of rapid stream rises.

Flash floods happen over a short period of time, and often catch people offguard as a result, whether in their car on their way to or from a trailhead, or out in the backcountry on foot. In addition, water moves very fast in flash flooding situations and people often underestimate the power of moving water. It only takes about 6 inches of fast-moving water to knock an adult off of their feet!

Desert/canyon regions and mountainous regions are both vulnerable to flash flooding due to steep terrain and often-rocky surfaces that struggle to absorb heavy amounts of rainfall in a short period of time. Flash flooding can also contribute to dangerous landslides and rockslides in these regions.

Also, the fact that backcountry users (hikers, climbers, campers, etc.) in mountain and canyon areas usually don't have reliable cell service, makes it difficult to receive timely warnings in the event of a flash flood. 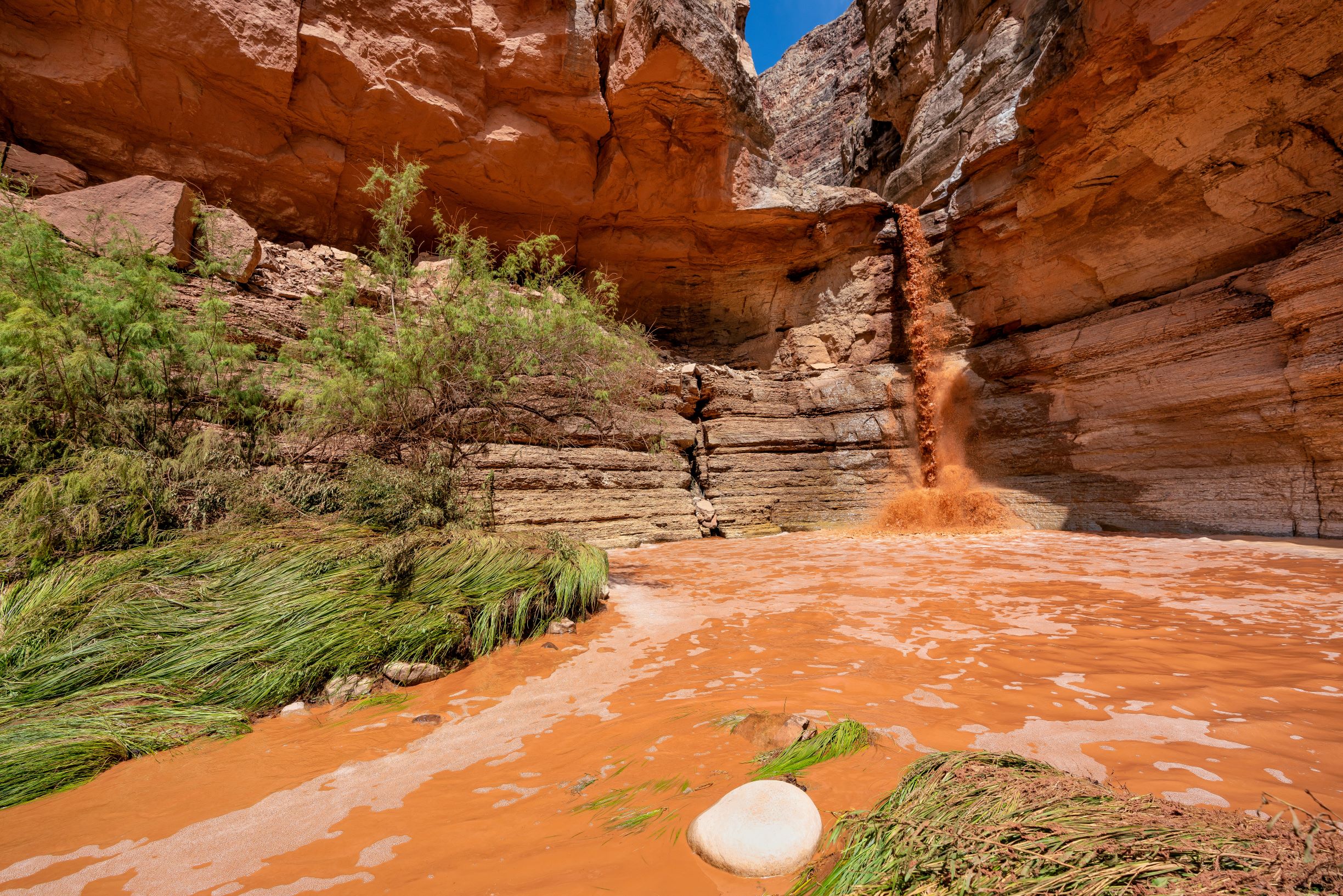 Flash floods are most common during the warmer months of the year since warm temperatures are able to hold greater amounts of moisture. However, cool season flash flooding is more common across coastal ranges of the West, including the Cascades and Sierra, when atmospheric river events are typical.

Also, flash flooding can occur at any time of year in the Appalachians, including the cooler months during instances when temperatures are warmer than average and moisture from the Gulf of Mexico surges northward.

How is a Flash Flood different from a River Flood?

River flooding occurs more gradually and over a longer period of time compared to flash flooding. Typically, spring snowmelt or longer duration periods of signfiicant rainfall lead to river rises that occur over a period of days (rather than hours). As a result, there is usually much more lead time to escape the dangers from river flooding compared to flash flooding.

Also, note that the term "river flooding" is used to describe a longer duration event, but don't be confused or take the wording too literally, because flash flooding absolutely can, and often does, involve rivers that rapidly rise and flood.

When it comes to forecasting flash floods in advance, it's all about identifying the potential. Flash floods are localized events that require a very specific set of circumstances, and similar to severe weather and thunderstorms, only the potential can be forecasted in advance over a region while more specific warnings in response to ongoing heavy rain have shorter lead times.

When it comes to forecasting flash flood potential, factors that are considered by meteorologists include the amount of moisture in the atmosphere, storm motions, trigger mechanisms (such as fronts or boundaries), terrain, soil type and conditions, snow cover, and burn scars from recent fires.

The North American Monsoon involves moisture sources from both the Gulf of Mexico and the South Pacific Ocean, and this seasonal pattern is often carefully monitored for flash flooding potential in the Western U.S. (especially the Southwest). 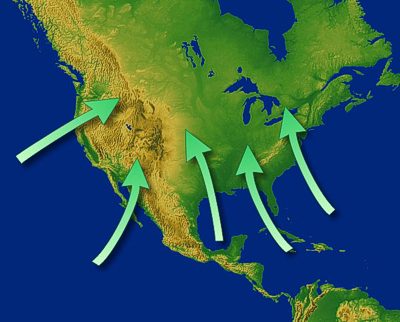 Typically, meteorologists will examine moisture levels relative to average, and if moisture levels are much higher than average for a particular time of year, then there may be a threat for heavy rainfall. However, in some cases, such as during monsoon season in the Southwest U.S., even "average" levels of moisture can produce localized flash flooding.

Two measures of moisture that meteorologists use to evaluate heavy rain potential include precipitable water and dewpoint temperature.

Precipitable water is the total amount of water vapor available in the atmosphere and is measured through weather balloon launches at various locations throughout the world. This is a good measure to evaluate the amount of moisture in the atmosphere at both the lower levels and the mid to upper levels.

Dewpoint temperature is the temperature at which air must be cooled to become saturated with water vapor. Dewpoint is measured alongside temperature, pressure, and wind at weather stations throughout the world, and is a variable used to evaluate moisture in the lower atmosphere, which could contribute to the development of heavy rain-producing showers and thunderstorms.

Another key factor used to determine heavy rainfall potential are wind speeds in the upper atmosphere. Roughly speaking, wind speeds and directions between about 10,000 and 20,000 feet in altitude determine the speed and track of a thunderstorm or a cluster of showers and thunderstorms.

Heavy rainfall and flash flooding can occur with fast storm motions as well, if moisture levels are high enough and/or if there is a stationary boundary causing showers/thunderstorms to continuously re-develop and over track over the same areas. This is also known as "training."

Stalled fronts, wind convergence boundaries, or stationary upper air features such as a trough or a jet streak (a wind maximum in the jet stream) are all elements that can lead to slow-moving or stationary showers or thunderstorms capable of producing heavy rainfall. Training of showers/thunderstorms can also occur along these features, in which heavy rain producing storms continuously re-develop over the same area.

Stalled boundaries and/or upper level features near mountain ranges can further enhance rainfall rates, as moisture is forced to rise in conjunction with the rise in terrain. This is known as the orographic effect.

Steep terrain with narrow valleys are more susceptible to runoff and flash flooding since water from heavy rainfall will travel downhill at faster rates into river and stream beds.

Rocky terrain and soils can also contribute to flash flooding in mountainous and canyon regions since water cannot penetrate and absorb into the ground as easily compared to forested areas with more permeable soils. This explains why canyon areas of Southern Utah, Arizona, and New Mexico are especially susceptible to flash flooding and do not require as much rain to produce a flash flood compared to other areas.

Forested areas with permeable soils (most common in the East and Northwest) can be susceptible to flash flooding as well when previously wet conditions have led to saturated soils. Once soils are heavily saturated, they are unable to absorb new water loads as easily, making runoff more likely during heavy rain events.

During the spring and even winter months, heavy rain falling on top of a deep snowpack can also result in flash flooding due to the combination of rain and melting snow. The Yellowstone floods of 2022 are a prime example of a rain on snow flooding event.

Fire burn scar flooding is a more localized but significant concern. This type of flooding is most common in the Western U.S., but can occur anywhere in the country. When a forest fire burns an area, the composition of the soil becomes altered in a way that it cannot readily absorb new water.

As a result, even brief periods of heavy rain or longer periods of moderate rain can quickly produce runoff and flash flooding, which includes mud and debris flows.

Burn scars are most susceptible to flash flooding in the first 3-5 years after a fire, and to a lesser extent out to 10 years.

Preparing for Flash Floods Ahead of Time:

Knowing whether or not rain is in the forecast is a good step, which you can determine by checking our OpenSummit 5-day forecasts. Remember, that even a low percentage chance of rain could result in flash flooding depending on the type of terrain (i.e. canyons/deserts) and the amount of moisture in the atmosphere.

Also, another great resource is NOAA's Weather Prediction Center, which produces a 3-day Excessive Rainfall Outlook. The map does an excellent job of highlighting whether or not an area will have a flash flood threat

One caveat to keep in mind with this resource is that it usually "underpredicts" the flash flood potential for less populated mountain and canyon regions versus reality. Therefore, even a green "Marginal" threat in a mountainous area is enough to be concerned about flash flooding potential, and this is even more so true in canyon and desert areas.

If there is even a small chance of flash flooding, make sure to plan an escape route if you are traveling in a vulnerable area and try to time your outing for early in the morning if thunderstorms are a threat in the afternoon. Also, think about where the trailhead is located and what type of terrain the road to the trailhead travels through.

Also, if you are camping, be sure to avoid setting up your tent in a low-lying area near a river or in a valley if flash flooding is a concern.

A Flash Flood Warning is issued for a more localized area when flash flooding is imminent or occurring. Warnings indicate immediate danger, and if you receive a warning for your current location then it's imperative to head to safer ground immediately.

Unfortunately, if you are in the backcountry when a Flash Flood Warning is issued, there is a good chance you will not receive the alert. It's a good idea to carry a NOAA Weather Radio with you, which will significantly increase your odds of picking up on a signal that could alert you to a warning.

What to Do if Caught in a Flash Flood

Flash floods happen very quickly, and if you happen to be caught in one, the key piece of advice is to get to higher ground immediately. Remember, even 6 inches of fast-moving water can knock you over, and water levels typically rise very fast during a flash flood.

If you are in your car, it's imperative to avoid flood waters crossing the road, and you are better off abandoning your car and seeking higher ground than risking getting swept away by floodwaters while in your car.