Storm on track for Thursday 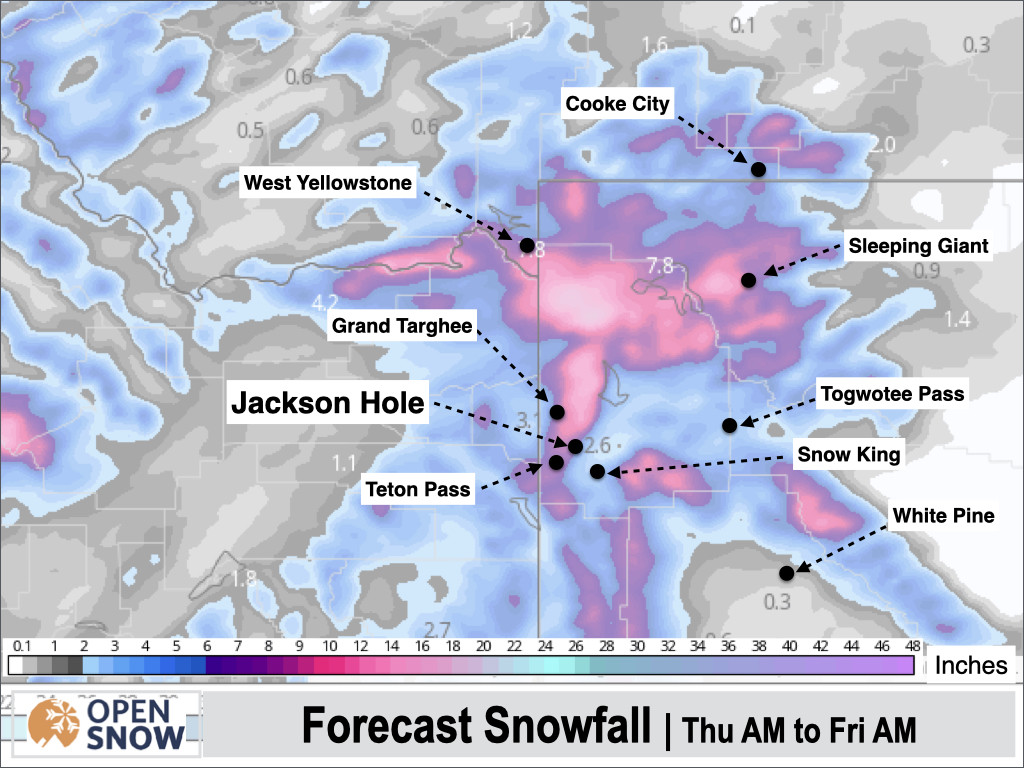 The Tetons received 3-7 inches of new snow on Wednesday as a leading-edge disturbance moved through. A stronger storm will arrive on Thursday with heavy snow expected in the afternoon and evening followed by clearing on Friday. The deepest conditions can be expected Friday AM. The next storm will bring another round of snow on Sunday with additional snow showers possible early next week.

Wednesday's disturbance delivered with 4-7 inches of new snow being reported across the Tetons on Thursday morning. Most of this new snow fell during the daytime hours on Wednesday.

A strong storm remains on track for Thursday, and as of this writing, snow has already started on the western side of the Tetons at Grand Targhee and in Teton Valley. Drier air in the low to mid levels of the atmosphere is persisting on the east side of the range for the time being.

Taking a look at the satellite loop from 7:30 am Thursday, we can see that more significant moisture is heading our way.

The timing of this storm has shifted slightly earlier compared to previous forecasts.

Snow will gradually pick up during the morning hours on Thursday, favoring the Targhee side initially. The heaviest and most widespread snowfall is then expected across the entire Teton Range and surrounding valleys from roughly noon on Thursday through midnight on Thursday night.

A cold front will arrive around midnight on Thursday night with lighter snow showers expected thereafter. Snow shower activity will then taper off by midday Friday.

Temperatures will remain fairly steady throughout the heaviest part of this snow event, with readings of around 20ºF at 9,000 feet and 30ºF in the valley. Snow quality will be a bit denser than recent storms (but still not super dense) with snow-liquid ratios of around 11.5 to 1.

Behind the cold front, temperatures will drop to near zero above 9,000 feet on Friday morning and the last little bit of snow will come in drier and more powdery.

I'm sticking with a snow forecast of 7-14 inches in the Tetons above 8,000 feet from Thursday morning through 5am Friday morning, with an additional 1-2 inches possible from lingering snow showers on Friday morning. The Jackson Hole Valley and Snow King will pick up 3-7 inches of new snow, while further east, Togwotee Pass will see 5-10 inches. 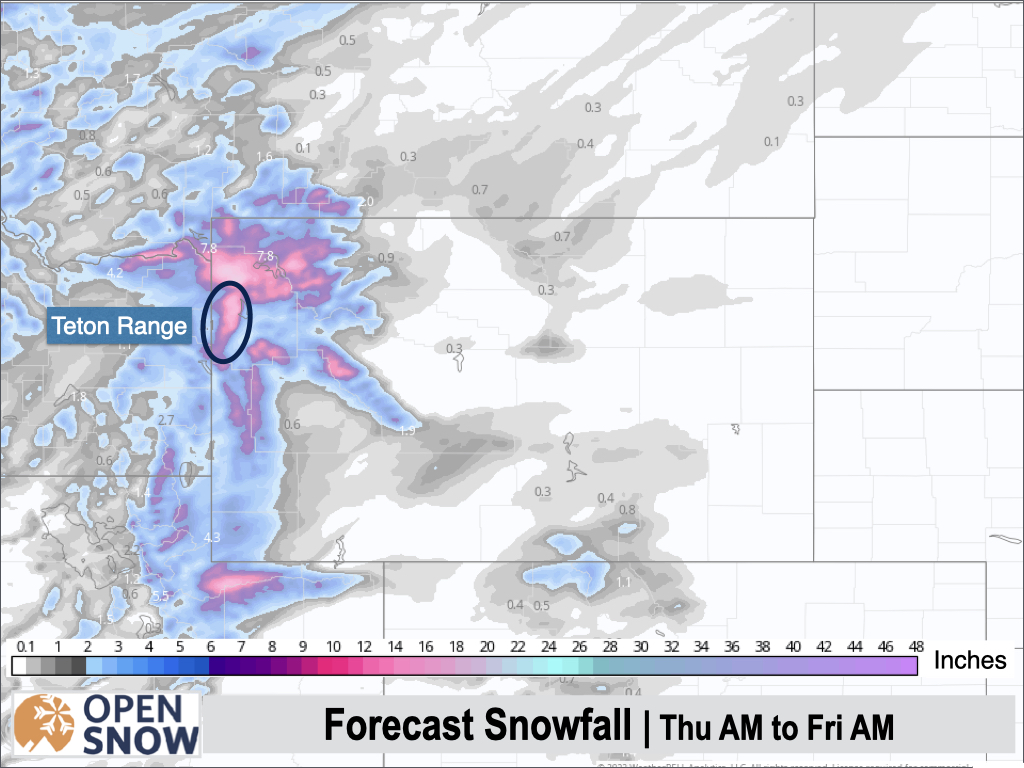 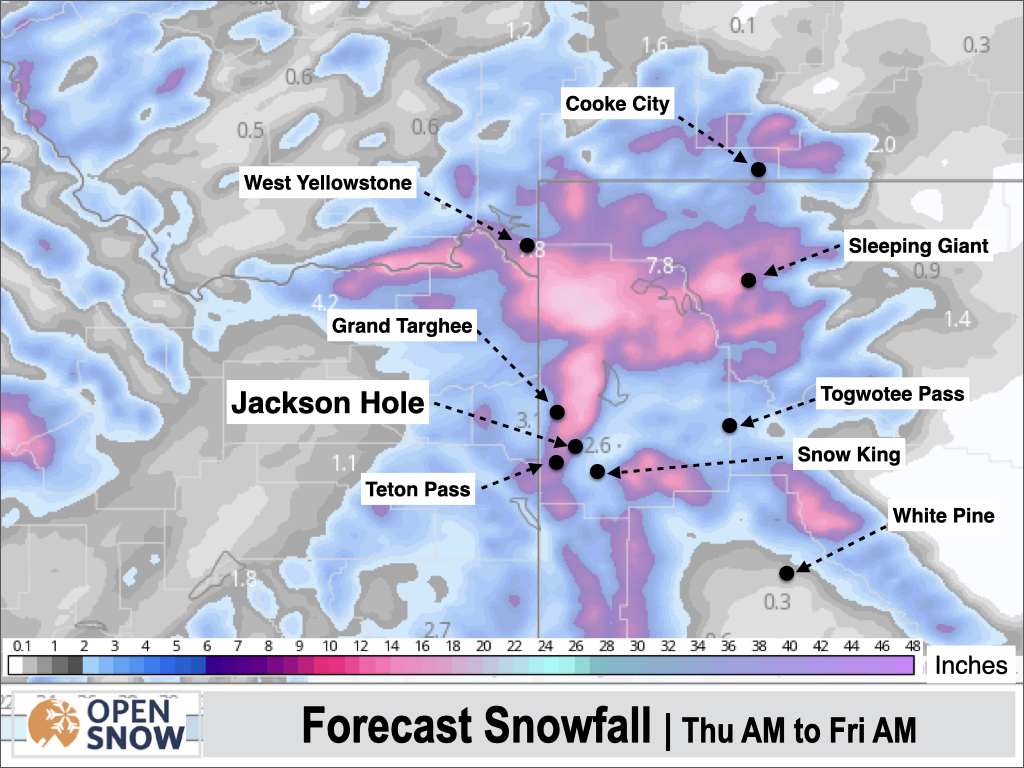 Thursday will be a fun day on the slopes with fresh snow from Wednesday and gradually increasing snowfall rates throughout the day on Thursday. However, strong winds can also be expected.

Friday morning will offer the deepest conditions on the slopes with improving visibility as the day progresses. The storm is also coming at a good time with more lifts and terrain slated to open this weekend.

Travel conditions will gradually deteriorate as the day progresses on Thursday with the worst conditions expected during the evening commute. Heavy snowfall rates along with strong winds will result in areas of blowing and drifting snow and poor visibility, both over the pass and over open valley roads.

Avalanche control will be possible over the pass early Friday morning. Otherwise, the commute on Friday morning, while not ideal, will be comparatively better compared to Thursday evening as the storm will be winding down.

We will see a break in the action on Saturday with chilly temperatures but mostly clear skies. The next storm will then arrive on Sunday (Dec 4) with moisture returning to the area via south/southwest winds. While there are still some question marks on the exact storm track, it is trending more favorably for the Tetons compared to my last post. 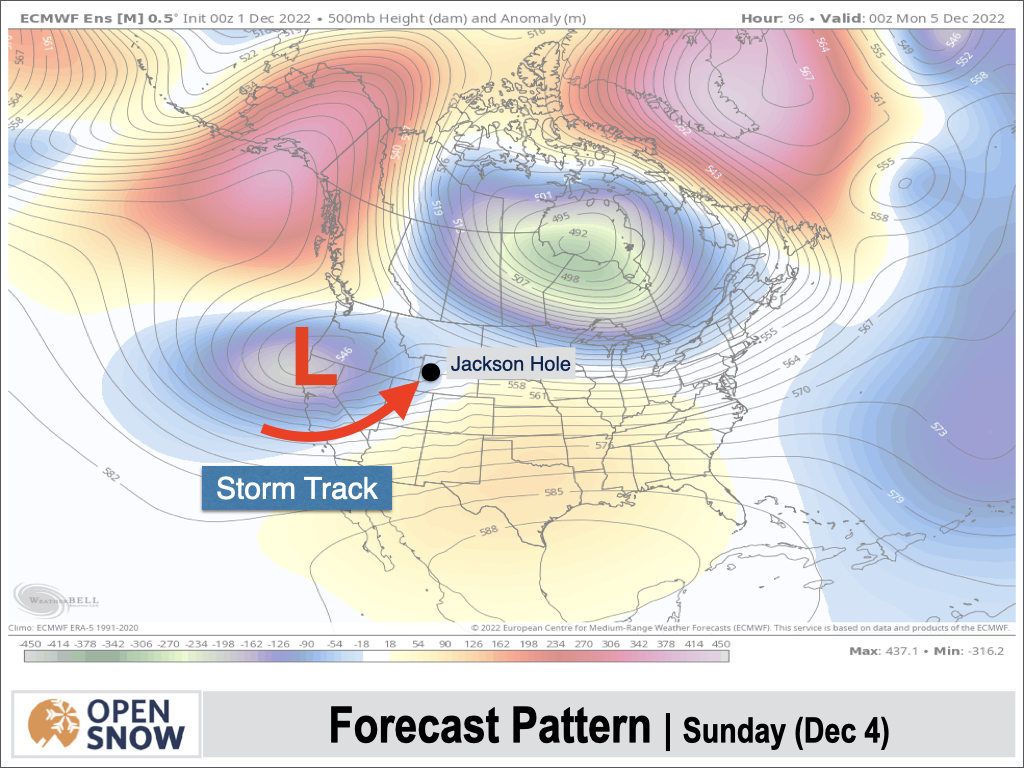 I don't expect Sunday's storm to be as strong as Thursday's, but we could still pick up a decent amount of snow, making for a nice refresher. Stay tuned as we get more dialed in on this storm moving forward.

Another storm will pass north of the area on Monday (Dec 5) and Tuesday (Dec 6). I have some hesitations about this storm since the jet stream and associated energy will remain well to our north.

However, most models are projecting a fair amount of moisture to reach the Tetons from the west/northwest, which could squeeze out some terrain-driven snow showers that would likely favor the Targhee side. There are still lots of question marks on how this will play out.

Outlook for December 7th and Beyond:

We will likely dry around Wednesday (Dec 7), then the next storm is possible around December 8th-9th. The latest trends are hinting that the best energy with this storm may pass south of the area, so my expectations are low for anything more than light snow, but we're still a week away so that could change (for better or for worse).

After that, the European and GFS Models are now projecting high pressure to build in over the weekend of December 10th-11th and early into the week of December 12th. However, the Canadian Model projects a more active pattern to persist through the 10th-11th weekend and beyond. In other words, confidence is low at this time.