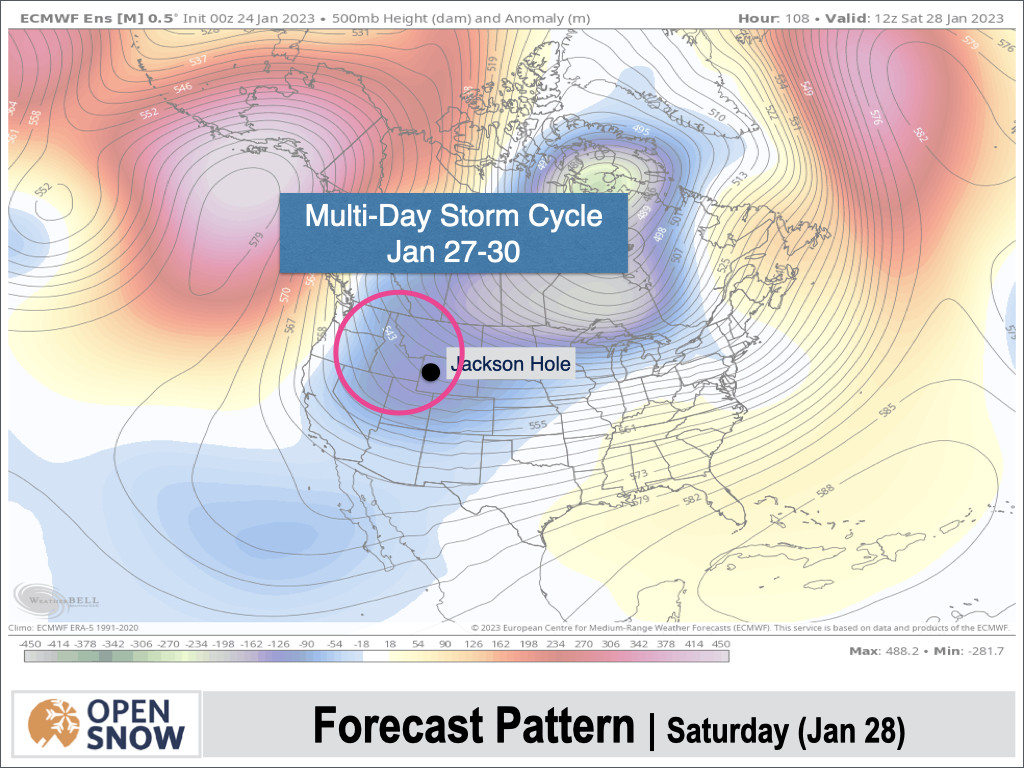 Periods of light snow can be expected across the Tetons from Tue to Thu. A multi-day storm cycle remains on track beginning Friday and continuing at least thru Sun and possibly Mon as well. The heaviest snowfall is likely on Fri with light/mod refills each day thereafter. Temps will be cold & snow quality dry/powdery, so it should be a great weekend.

Forecast for Tuesday to Tuesday Night:

Light snow is falling on Tuesday morning as a weak disturbance moves through with new snow amounts of 1" at Targhee and a dusting at JHMR.

Snow showers/flurries will continue during the morning with a lull expected later in the day. Snow showers will then pick back up on Tuesday afternoon & evening as another disturbance arrives from the north/northwest.

Snow totals on Tuesday-Tuesday night will range from 1-2 inches in the Tetons with a dusting to a few tenths of an inch in the valleys.

Snowfall aside, it will be a cold and blustery day up high with highs only in the single digits at 9,000 feet along with north/northwest winds of 10-20 mph with gusts to 30-35 mph. Highs in the valley will reach the upper teens to low 20s.

Forecast for Wednesday to Thursday:

A cold and unsettled north/northwest flow pattern will continue on Wednesday and into the day on Thursday with mostly cloudy skies and occasional light snow showers/flurries. We could maybe pick up another inch or two up high during this time, but my expectations are low.

A multi-day snow event remains on track for this period as a trough of low pressure deepens over the Northern Rockies before slowly progressing southward through the weekend. This will result in multiple "storms" arriving in succession from at least Friday through Sunday, and likely Monday as well. 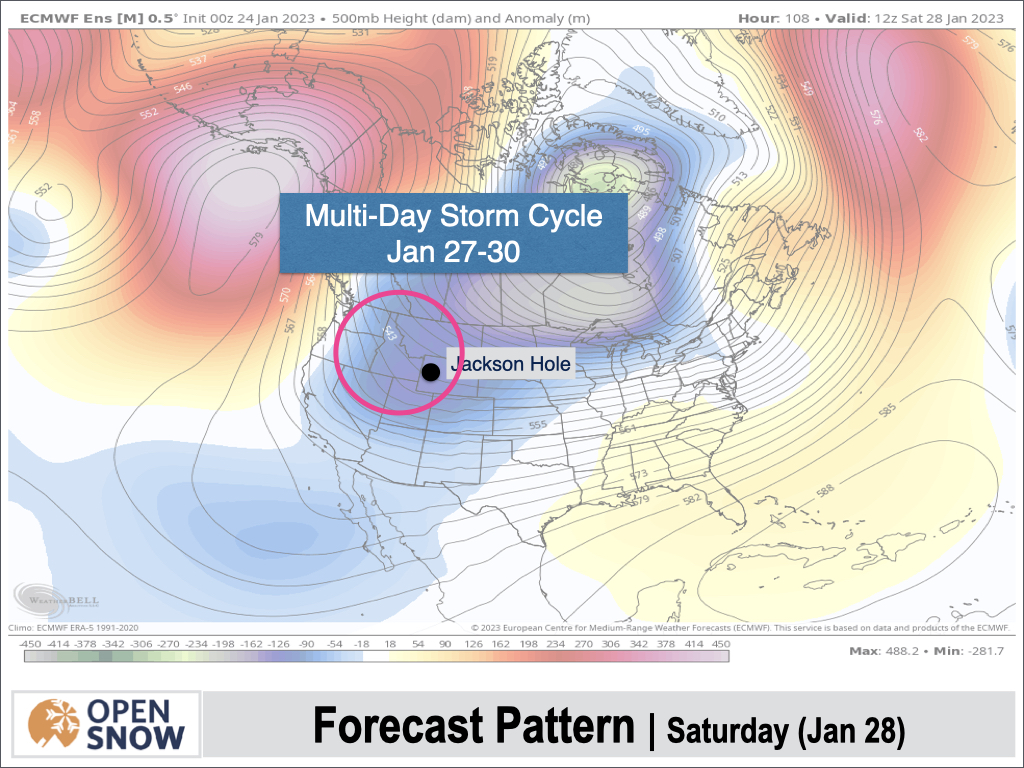 Cold air is expected to remain in place throughout this pattern, which will result in low-density powder snow quality throughout this cycle. In other words, it could be a very fun weekend on the slopes.

The first and strongest wave will arrive from the west/northwest early Friday morning with snow expected throughout the day on Friday and into Friday night. Good storm skiing conditions with brisk (but not super strong) winds can be expected by Friday afternoon, while we could be into powder day territory by Saturday morning. 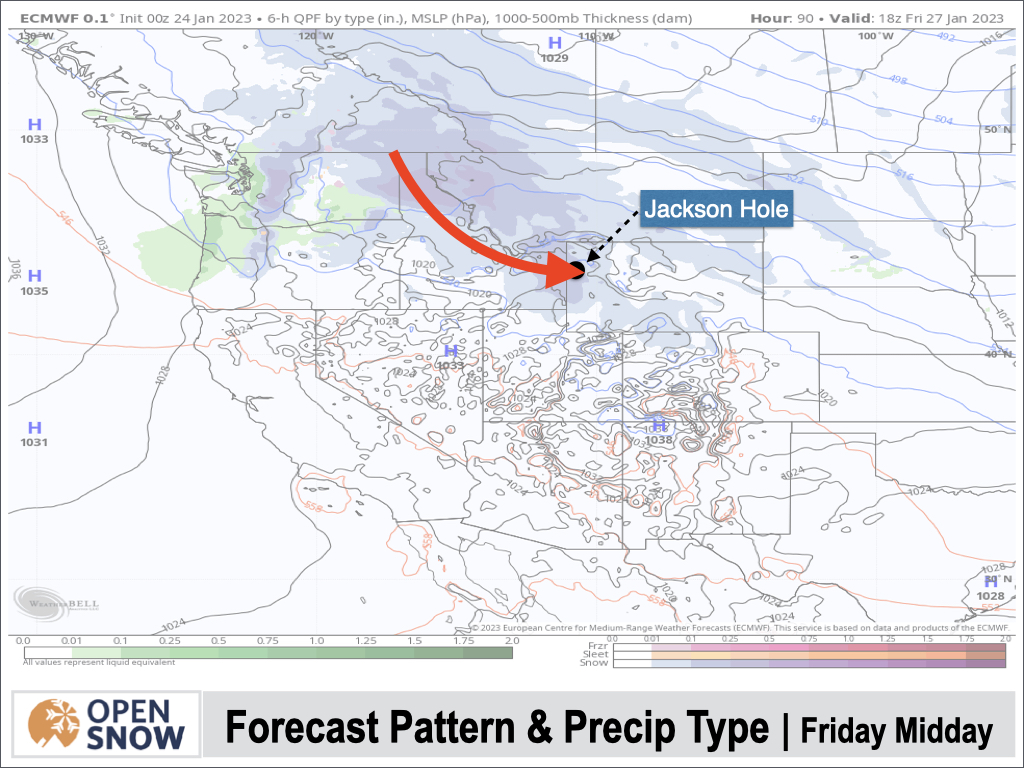 Moisture will continue to stream in from the west on Saturday and Saturday night with weaker pulses of energy resulting in the potential for additional snowfall. Overall, I'm expecting lighter snow on Saturday compared to Friday, but we could still see some nice refills. Another wave is likely on Sunday and quite possibly into Monday as an area of low pressure works its way southward into California with moisture and energy reaching the Tetons out ahead of this low. We could see winds ranging from southerly to westerly in this pattern, but confidence is low in the storm track and details at the moment. 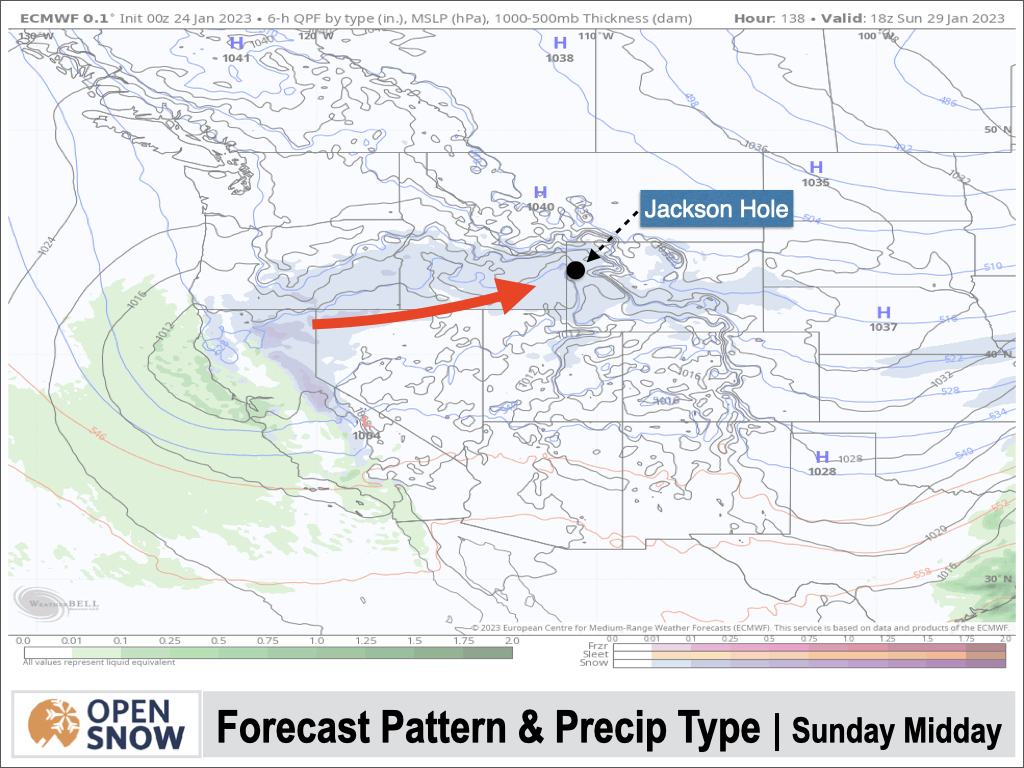 Another feature to watch will be an arctic front that will stall just to our north and east over the weekend. Although we will be on the "warmer" side of the front through this event, we will still see temperatures remain cold enough for good-quality snow. And it's possible we could see a bit of this arctic air spill into the area once snow eventually ends, likely on Monday or Monday night.

I suspect we will dry out with modified arctic air taking control at the end of this storm cycle around Tuesday (Jan 31).

Models are now trending toward a ridge of high-pressure building in over the Southwest U.S. during the first couple of days of February. However, the ridge may end up staying far enough south for an unsettled west/northwest flow to setup over the Northern Rockies with snow chances returning from about February 1st-3rd. Confidence is low, however, as this is different from how things were looking prior.

Over the weekend of February 4th-5th and beyond, longer-range models are hinting at a more active pattern taking hold and favoring the Northwest and Northern Rockies, including the Tetons. Low confidence this far out (especially with some poor model consistency in recent days), but I remain optimistic about our snow potential for early February.