Fresh turns are available Tuesday with more light snow affecting the northern half of the Mid-Atlantic. Wednesday will see another weak storm system track to the north with scattered rain and show showers in the northern half of the region. Temperatures will warm Wednesday with a few more chances of rain and show showers to end the week before another storm brings precipitation for the weekend. 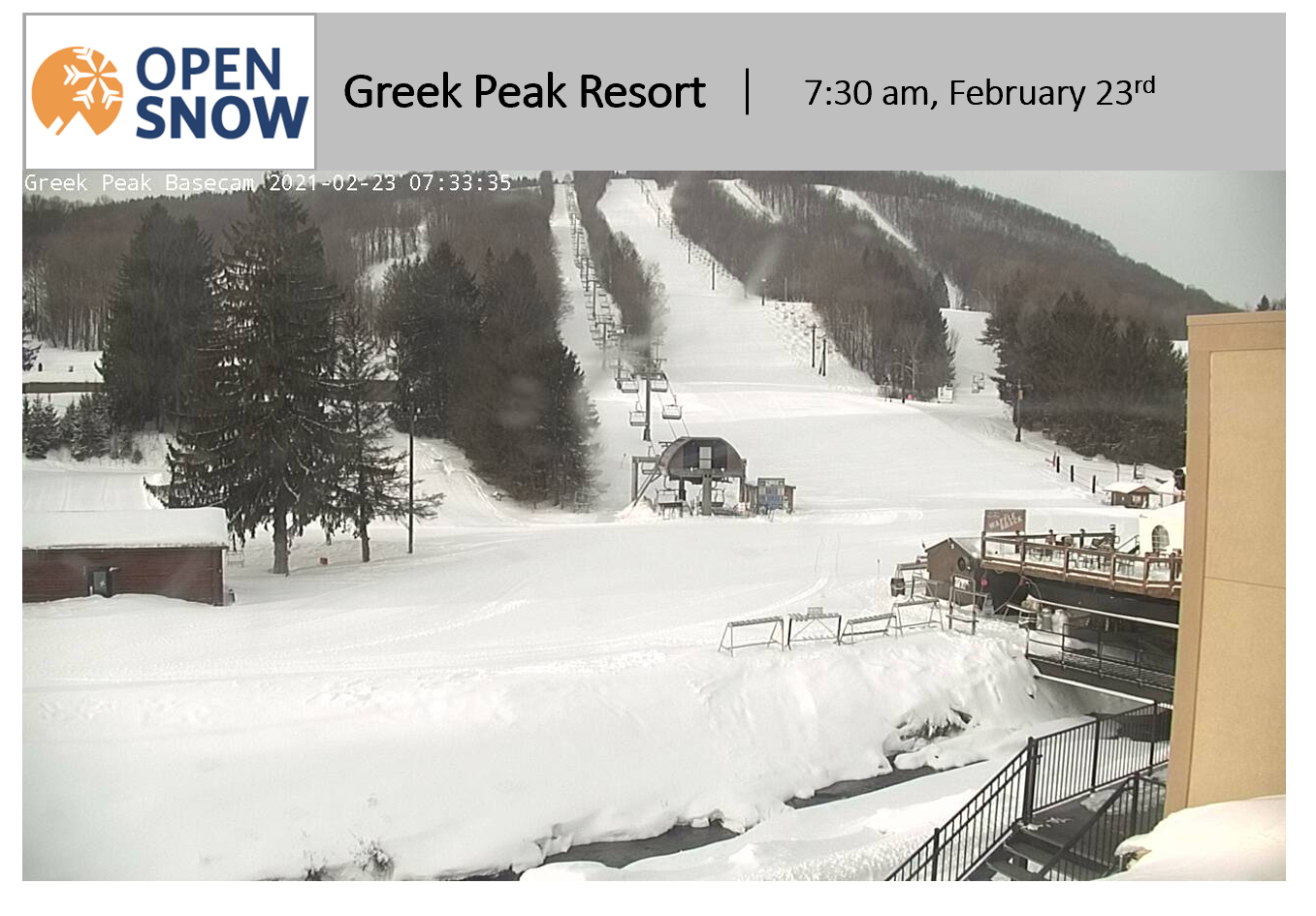 Snow is currently affecting the western half of the Mid-Atlantic and continues to spread east throughout the day, Tuesday. This area of snow will be a bit more scattered than Monday and causes lighter snow accumulations. A few rain showers could mix in today as well. Here is the current view of the radar from 6 am until 7:30 am Tuesday morning.

This area of snow will clear the region to the east by 3 - 5 pm, with a few scattered rain and snow showers remaining in the evening. Light snow accumulations are expected of 1 - 3 inches. Here is a look at what the HRRR model shows for snow accumulations by 6 pm Tuesday. 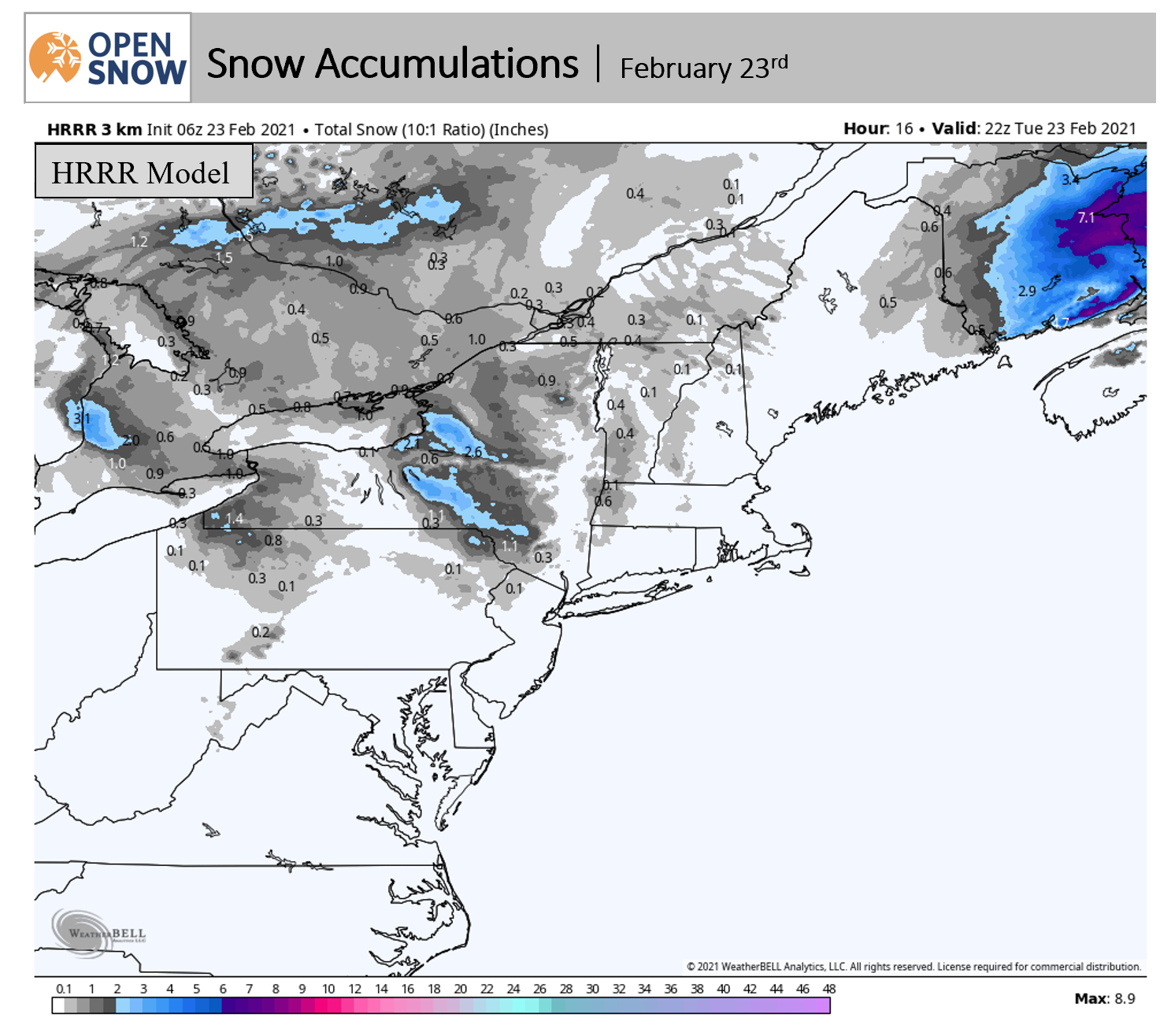 Following this weak storm system, another weaker storm system will be on its heels. This storm system will track slightly further north again and allow warm air to move into the region from the south. Temperatures will rise above freezing and cause a few scattered rain and snow showers in the northern half of the region. The southern and central Mid-Atlantic will see temperatures crack into the 50s, and areas further north will be in the 30s and 40s. As this storm system tracks further north on Wednesday evening, a few scattered lake-effect snow showers could develop in western to central New York. These showers will be light and scattered with minimal accumulations by Thursday afternoon. During the afternoon Thursday, more snow showers could develop in the northern Mid-Atlantic that will extend into the day Friday. Western and central New York will see the most from these snow showers of 1 - 4 inches of snow by Friday evening. Here is a look at the NAM 12 km model’s depiction of precipitation type/intensity and mean sea-level pressure (MSLP) from 2 pm Wednesday until 2 am Friday.

This area of snow will clear the region by Friday afternoon. Dry air is moving in Friday afternoon ahead of the next storm system on Saturday, February 27th. This storm system still remains a bit tricky and the models have yet to agree that much. What I know right now is that two storm systems will approach from the south and west on Friday evening and early Saturday morning, February 26th and 27th. The models are tracking storm systems from the west (Great Lakes region) and the southern United States. A storm will be over our region by Saturday, February 27th, it just remains uncertain which area of the storm will have more of an impact on our region. If the storm from the south holds on strong, greater potential of snow is possible for the region. If the storm from the west is the main component, then warmer air will push into the region. Let’s take a look at the GFS and ECMWF (Euro) model’s depiction of precipitation type/intensity and MSLP at 8 - 11 am, Saturday, February 27th.

I’ll have a better idea of this storm system in the next forecast update on Thursday. Right now it does not look like any major snow or rain producer but we’ll see how the forecast develops. Precipitation will likely start as snow in many areas but change to rain pretty quickly.

More rounds of storm systems will continue to track over our region next week. The upper-level pattern will be less favorable for cold weather, which means greater chances of rain for the region. A lot of uncertainty remains as we inch toward spring and precipitation type forecasts will continue to be messy. Here is a look at the Euro model’s upper-level pattern from Sunday, February 28th until Saturday, March 6th.

The Euro is hinting at some colder weather returning to the region by next weekend (blue colors above). We’ll see if a storm can track over our region by then and give us some March snow. Overall though, next week will likely see a mix of rain and snow events. Keep hitting the slopes with great conditions throughout the region that will continue! I’ll have the next forecast out Thursday morning.

Zach Butler
Meteorologist
Zach Butler is currently a master’s student in Applied Meteorology at Plymouth State University in New Hampshire. Originally from Maryland, he has grown up hiking and skiing up and down the East Coast. When not doing coursework or enjoying the outdoors, he works as substitute teacher and a ski instructor for Loon Mountain.
Read More