By Croix Christenson, Meteorologist
Posted 2 months ago
December 2, 2022 7:46am CST

A quick-moving system will move through the Midwest on Friday night bringing a mix of rain and snow to much of the region. Saturday will bring much colder temperatures and strong winds after a mild Friday, which will result in wind chills below zero for northern portions of the Midwest.

The past 24 hours only brought a few flurries and light snow showers in isolated pockets, as a result no resorts Friday morning reported any snowfall or any estimated recent snow.

I do want to highlight a feature you might find useful during the early portion of the season. Resorts report how much terrain they have open if you head over to your "Favorites" and click "Snow Report" - there is a wealth of information available.

Click "Show Sort" and then sort by "Area Open" to see which of your favorites have the most terrain open. Alpine Valley in Wisconsin is still the lone resort reporting 100% open! 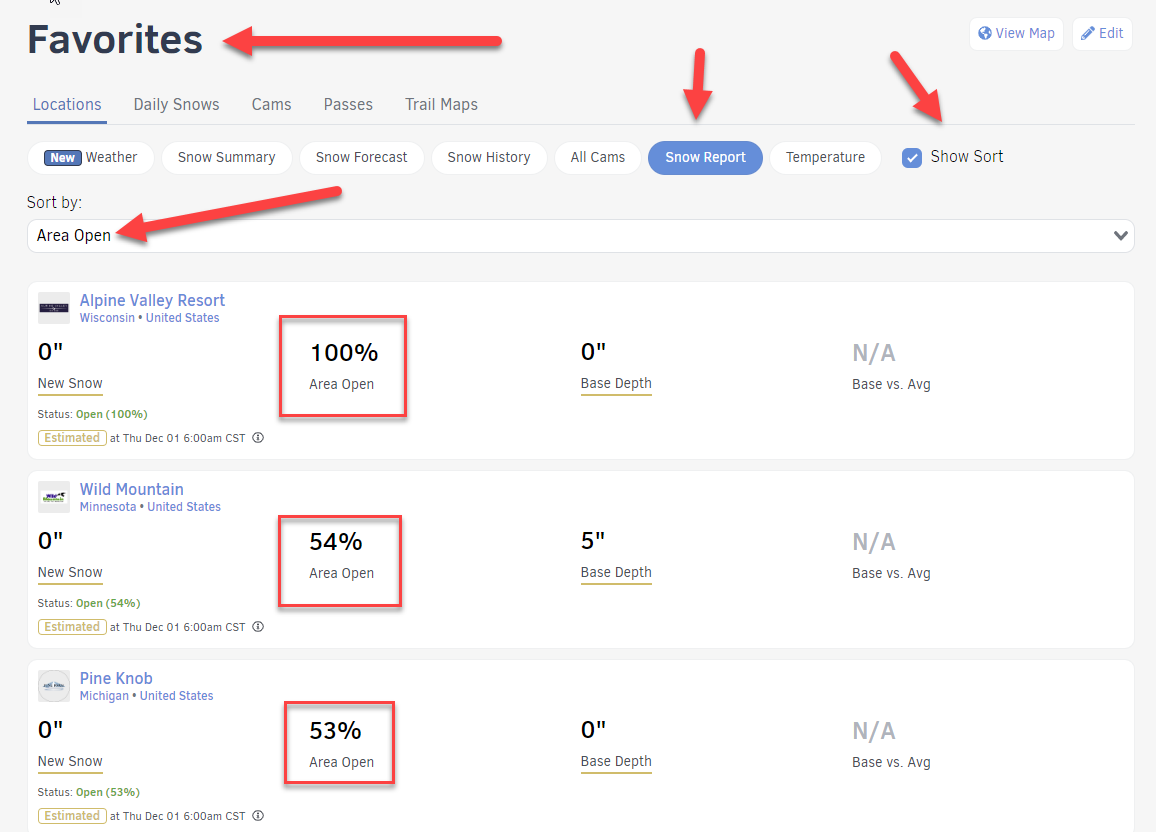 Friday will bring a brief warmup before rain and snow arrives in the evening and into the overnight. Highs on Friday will range from the 30s in northern portions of Minnesota to near 50 in southern Wisconsin and portions of lower Michigan.

By Friday evening, snow will start falling in Minnesota with some drizzle or a few light rain showers possible in the southern half of the Midwest, particularly in Wisconsin and lower Michigan.

As we move to the overnight hours, an area of rain will develop over southern Wisconsin and lower Michigan and even for portions of the UP. By the time we get to Saturday morning, most of the rain will have changed to snow for the UP and northern lower Michigan, with the Traverse City area potentially picking up a quick inch or two.

Below is an animation with some annotations to illustrate this evolution from Friday evening to Saturday morning. As you probably noticed, it will be a bit of a messy system before areas change over to all snow.

How much snow? Here is an estimate of how much snow falls from Friday evening to Saturday afternoon. For areas that receive rain first, the snow will mainly fall from Saturday very early in the morning to the early afternoon, particularly in northern lower Michigan. 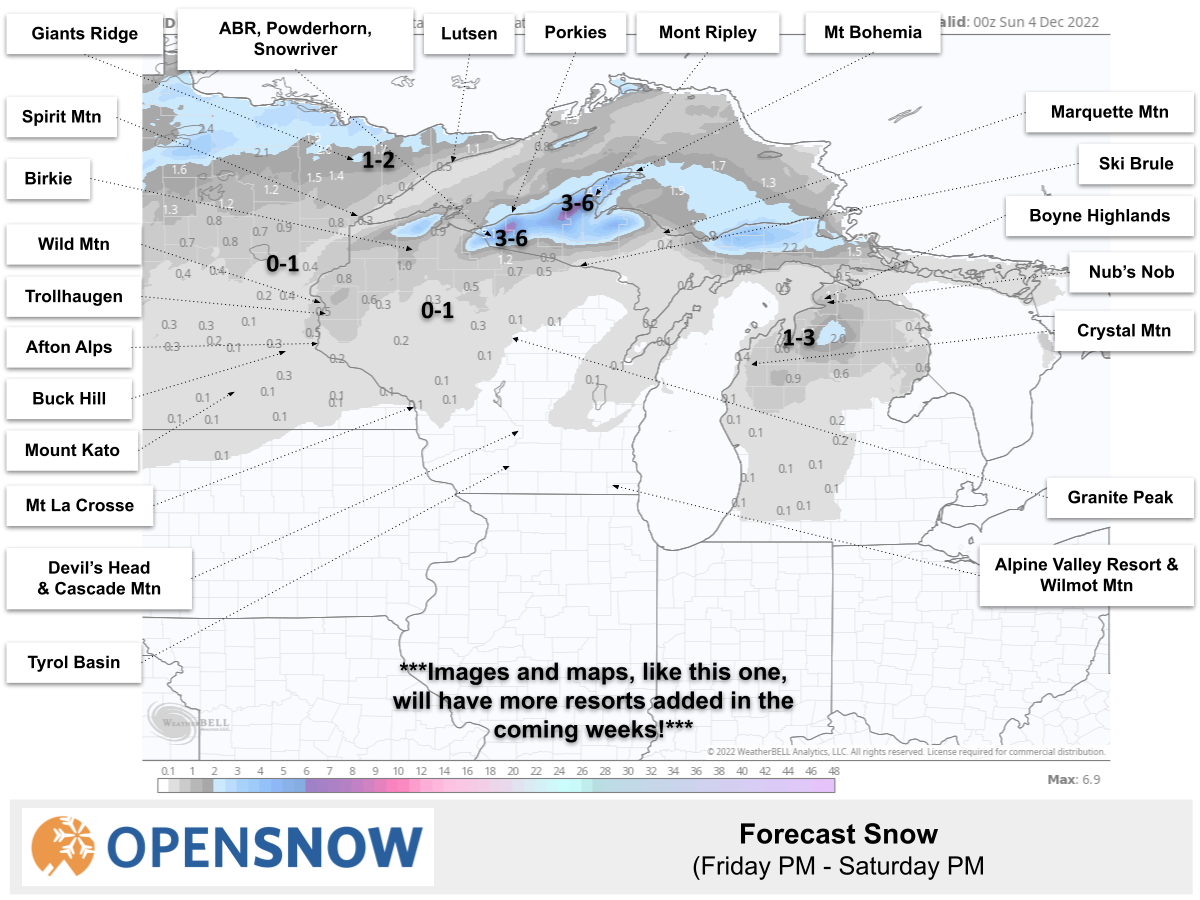 Lingering lake effect snow showers are possible in the UP and portions of lower Michigan during the day on Saturday. The wind direction off of Lake Superior probably favors the Keweenaw Peninsula over the Ironwood area for additional accumulations Saturday night.

As we look ahead to Sunday, persistent west and southwest winds will likely keep the snow flying in the UP, particularly up at Mont Ripley and Mt Bohemia, which hopefully helps with their efforts to open. Searchmont just across the border is also likely a winner come Sunday and hopefully, this helps them open before too long.

Saturday will be quite windy so be sure to layer appropriately as temperatures will also plummet by Saturday morning. First chair temps will range from the single digits in Minnesota to 20s in lower Michigan. Wind chill will be below zero for most of Minnesota, northern Wisconsin, and portions of the UP.

We have some agreement for the light snow on Monday! Last night the models disagreed a lot but today have aligned a bit more and favor areas from the Twin Cities across northern Wisconsin and into the UP for the best chance of snow on Monday.

I do not expect this to be a big event - a dusting to a few inches for most locations - but any snow on top of the machine made helps this time of year. 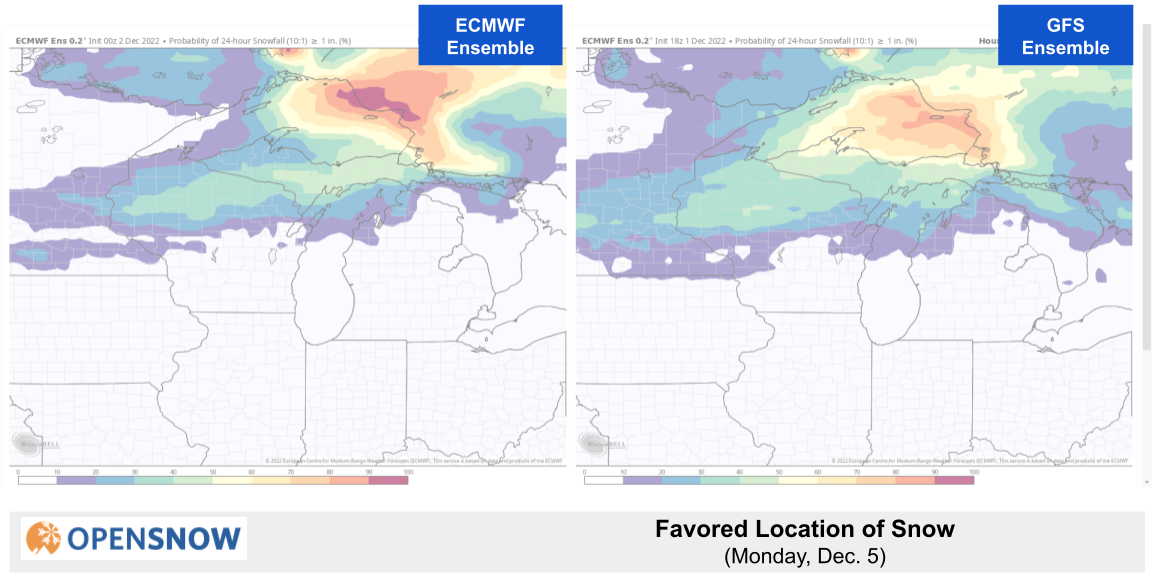 Another quick-moving system is possible around Wednesday, December 7th, and again around the December 9-10 range.

As I mentioned in previous forecasts, the overall pattern for next week still looks promising for continued lake effect snow and favorable snowmaking conditions. I would expect the difference in the amount of terrain open for resorts next weekend vs this weekend to be considerable.

In a forecast later this weekend, I will do a bit more of a deep dive into the lake effect snow possible over a 4-6 day period next week. I might also splash in what some of the signals are telling us about the month of December: spoiler alert, it looks colder than normal.