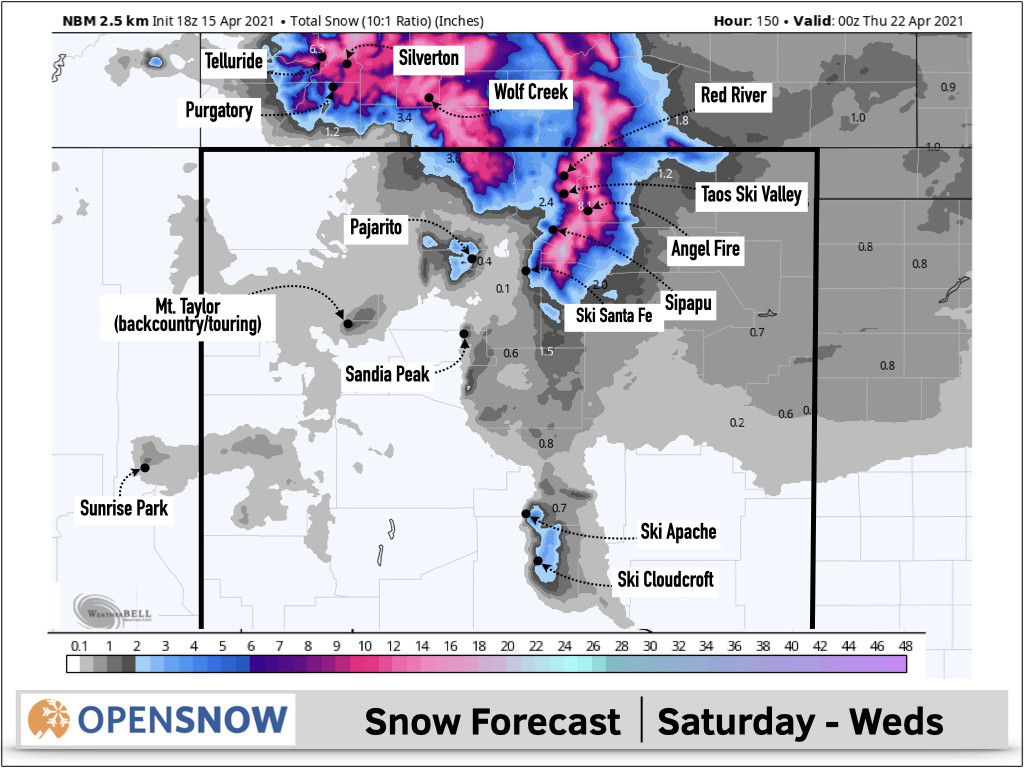 Winter will try to make one last hurrah in the northern mountains with 5-10+" above 10,000ft by Monday, and additional chances for snow through April 21-22. High temps will be in the 20's on Saturday and Sunday with over a foot of snow possible in the Sangres over the next 5-7 days. In this post, I also look at snowfall trends at Ski Apache over the past 20 years as requested by a reader.

Don't pack away those skis and boards deep in summer storage just yet. An active winter-like weather pattern is in store for the northern mountains high country from April 17th through the 22nd. Saturday into Sunday, and overnight Monday, look to be the days with the greatest potential for snowfall and we could see double-digit storm cycle accumulation by Tuesday morning.

Here is the National Blend of Models snowfall forecast from Saturday through Wednesday with up to a foot of snow possible for the Sangres, especially above 10,000 feet elevation. 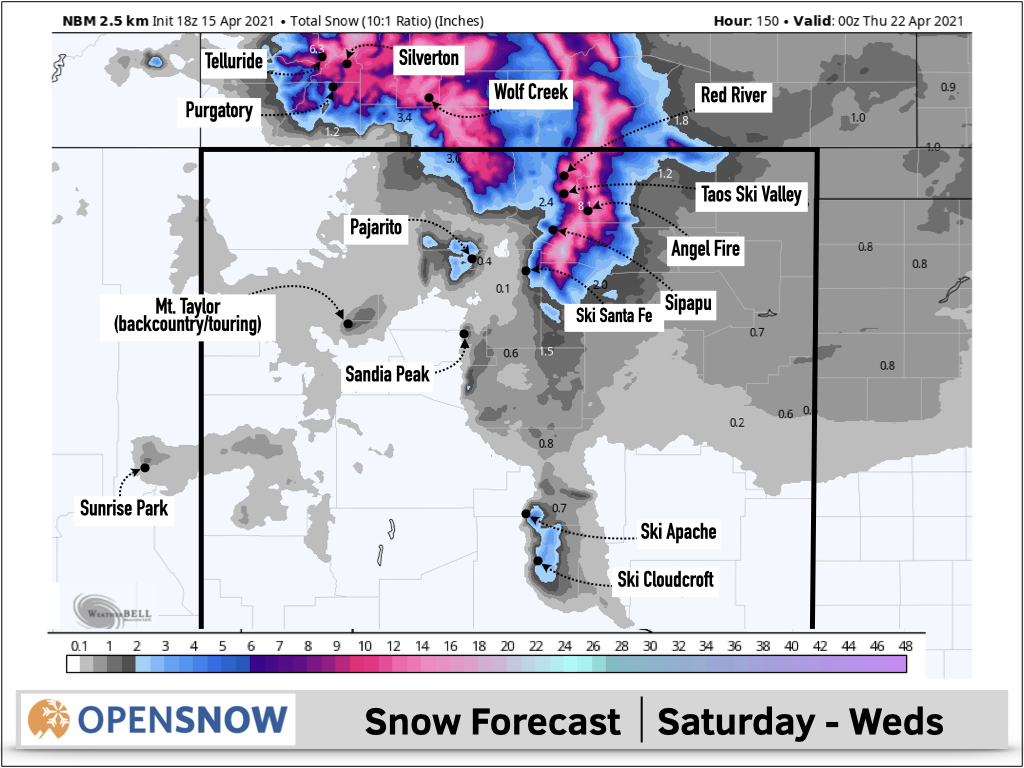 A blast of cold will plummet temperatures into the teens and 20's on Saturday and Sunday.

If you are heading out in search of some spring powder, Sunday morning should be the best chance for the deepest totals. Tuesday morning is a wild card for lower-end freshies.

A relatively cool, active pattern will be in store through Thursday before we return to high pressure and warm, dry conditions the weekend of April 24-25.

As part of the season wrap-up topics, one reader asked whether Ski Apache is receiving less snow in recent years compared to twenty years ago? Fortunately, there is a SNOTEL site on Sierra Blanca at 10,280 ft elevation adjacent to Ski Apache so we can gather some general insights into this important question.

First, here is a little background on SNOTEL. And here is the link to the Sierra Blanca (Ski Apache) SNOTEL site page in case you want to dig around the cool data on your own.

For a snapshot examination of this 20-year question, below is a chart showing the Snow Water Equivalent (SWE) for the years 2014-2021, followed by the same chart for the years 2003-2013. SWE shows the amount of liquid that would be present if you melted a column of snow, it is a useful tool for understanding snowfall and snowpack from season to season.

I am not a climatologist and can't make any other conclusions or extrapolations based on the SNOTEL data above. However, the climate trends in and around Ski Apache are well documented. For example, this article published on the U.S. Climate Resilience Toolkit site discusses how the Mescalero Apache Tribe which runs and operates Ski Apache is grappling overall with a shift to a warmer and drier climate for the Sacramento Mountains and surrounding region.

After a blast of cooler and wetter conditions the third week of April, the last week of April shows signals of a return to warmer conditions for New Mexico with the colder, stormier pattern retreating north to Canada.

Temperatures look above normal for the inner mountain west the last week of April. 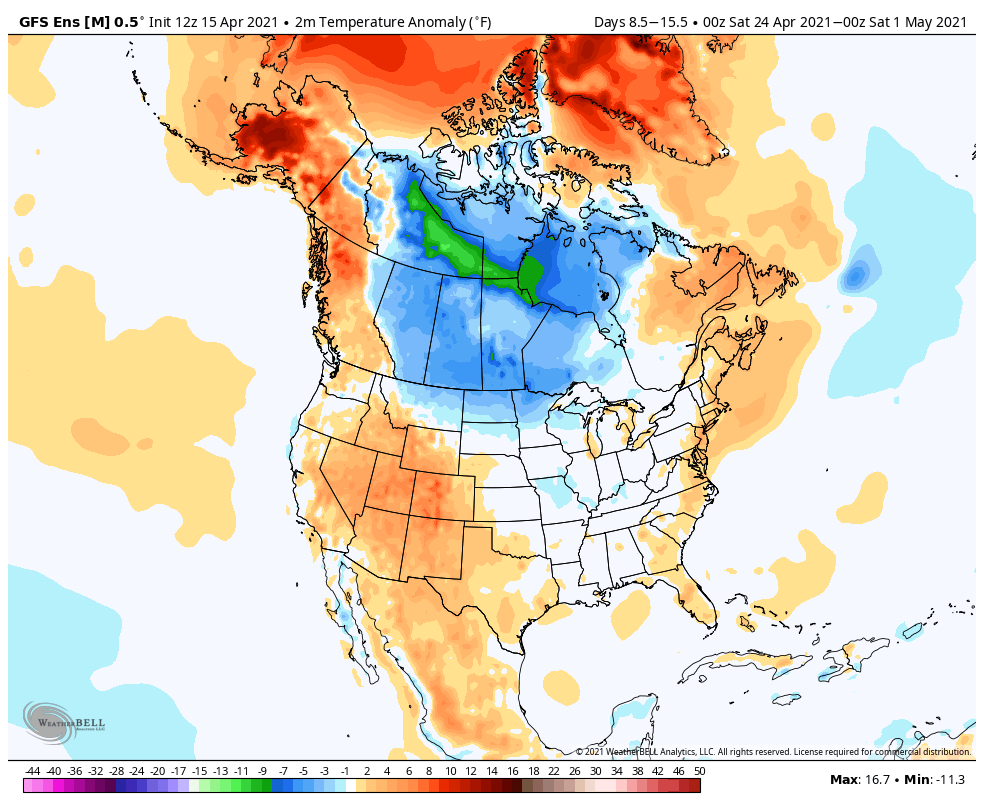 Thanks to everyone who sent in season wrap-up questions and topics. I will be posting a final season wrap-up in the coming days looking at memorable storms and moments as we officially bid farewell to the 2020-2021 season. 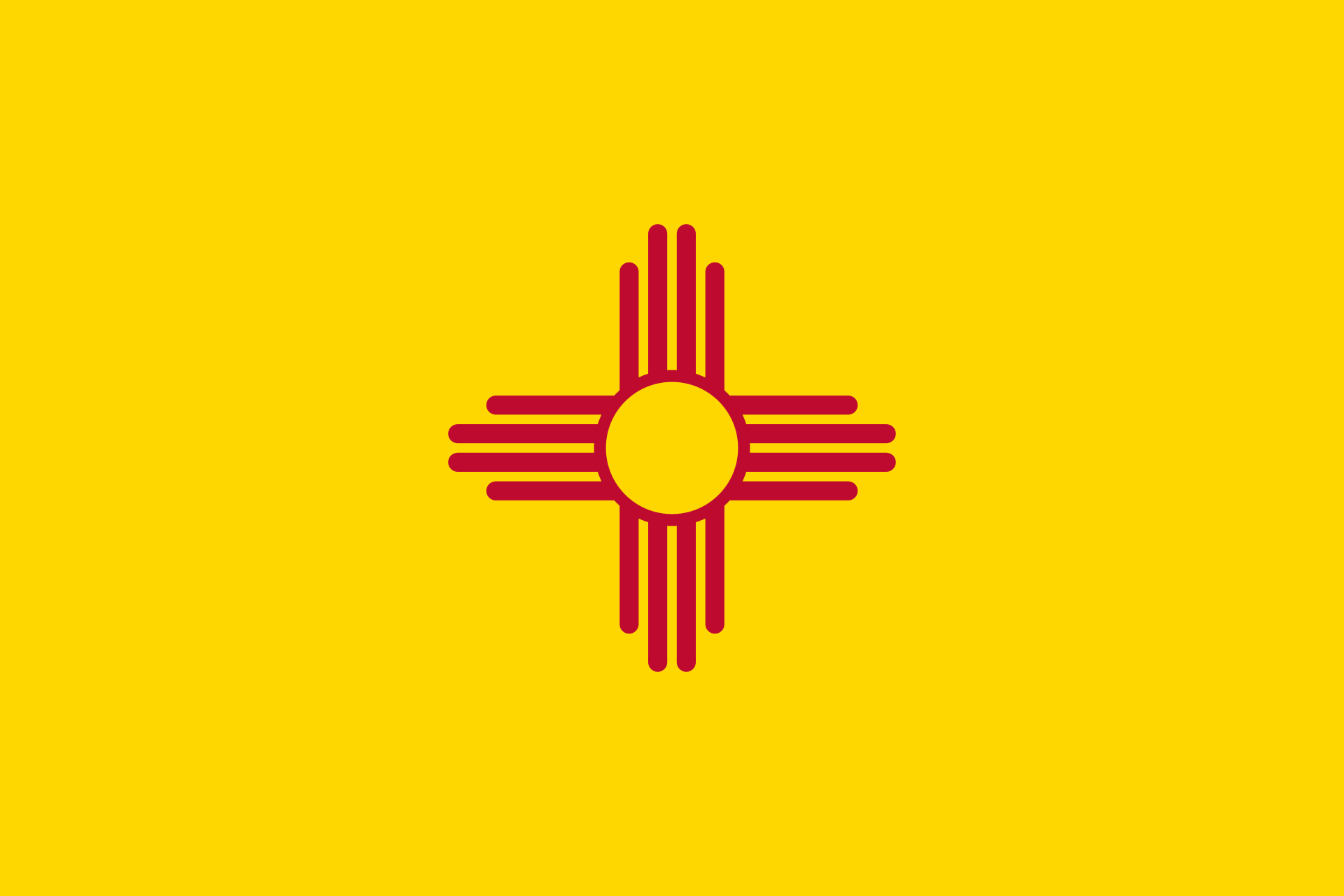