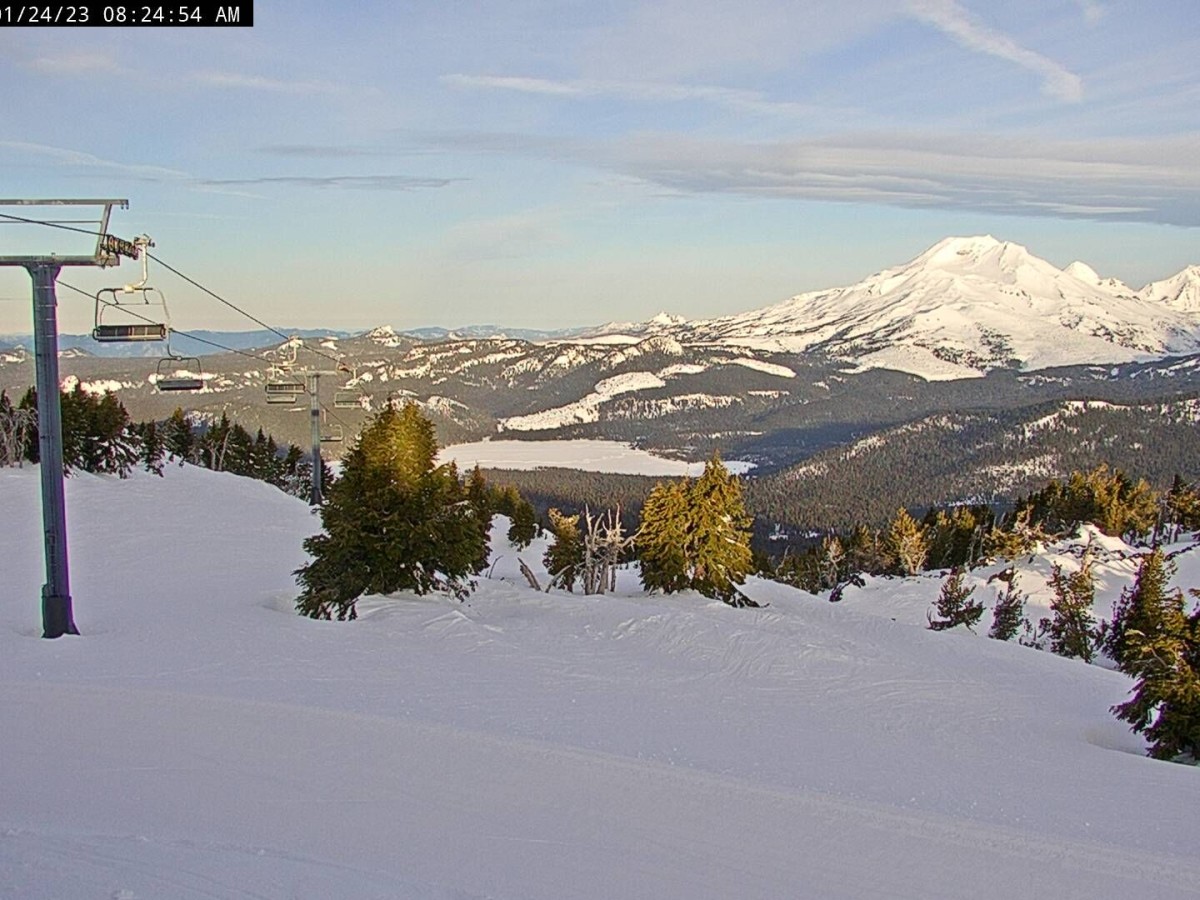 A ridge of high pressure will result in mostly dry conditions from Tue to Thu, with the only exception being a weak disturbance on Tue that will bring light snow showers to the North Cascades and ID Panhandle. Two storms will then arrive Fri & Sat with the Inland NW being favored for the highest totals. An arctic cold front will also arrive Sat, ushering in very cold air over the days to follow.

Light snow showers can be expected across the North Cascades during the day on Tuesday as a weak disturbance moves through. Mt. Baker has the best chance of picking up a couple of inches of new snow, while chances for anything more than a dusting will decrease from north to south from Stevens Pass to the Rainier area.

Despite the light snowfall, winds will be gusty out of the northwest throughout the Cascades on Tuesday. Snow levels will be near or below base areas with high temps in the upper 20s to low 30s at mid-mountain elevations.

High pressure will strengthen on Wednesday and Thursday, resulting in dry and sunny conditions along with much warmer temperatures as highs top out in the mid to upper 30s both days. Winds will be relatively light to moderate on Wednesday before picking up out of the northwest on Thursday afternoon.

Light snow showers can be expected across the Idaho Panhandle during the day on Tuesday and on Tuesday night as a weak disturbance moves through. Lookout Pass has the best chance of picking up an inch or two of new snow, while chances for anything more than a dusting will be low elsewhere. In fact, Eastern Washington should stay totally dry.

On Wednesday, the focus of snow shower activity will shift south of I-90 and into Central Idaho, with mostly dry conditions expected for INW ski resorts. Lookout Pass could potentially see some lingering flurries on Wednesday, but that's about it.

Highs on Tuesday will reach the low to mid-20s at mid-mountain elevations with breezy northwest winds. On Wednesday, highs will warm up into the upper 20s to low 30s with lighter winds expected.

High pressure will strengthen on Thursday, resulting in dry and sunny conditions with highs in the upper 20s to low 30s. Winds will also pick up out of the northwest again during the afternoon.

Dry and mostly sunny conditions will prevail throughout Oregon from Tuesday to Thursday. Winds will be breezy at times out of the north/northwest on Tuesday before decreasing on Wednesday and Thursday.

Highs at mid-mountain elevations will reach the low to mid-30s on Tuesday across the Cascades before warming up into the upper 30s to low 40s on Wednesday and Thursday.

Across the Blue Mountains, highs will reach the mid-20s on Tuesday and Wednesday before warming up into the low 30s on Thursday.

The pattern will turn more active this week as a trough of low pressure over British Columbia deepens southward across the Northwest U.S. This will open the door to two storms during this period, though I'm expecting relatively modest snowfall at this time.

A cold front will arrive at the onset of this storm, and snow levels should generally remain near or below base areas, though lower elevation areas such as Snoqualmie Pass and Mt. Hood Skibowl might see rain mix in at times near the base. 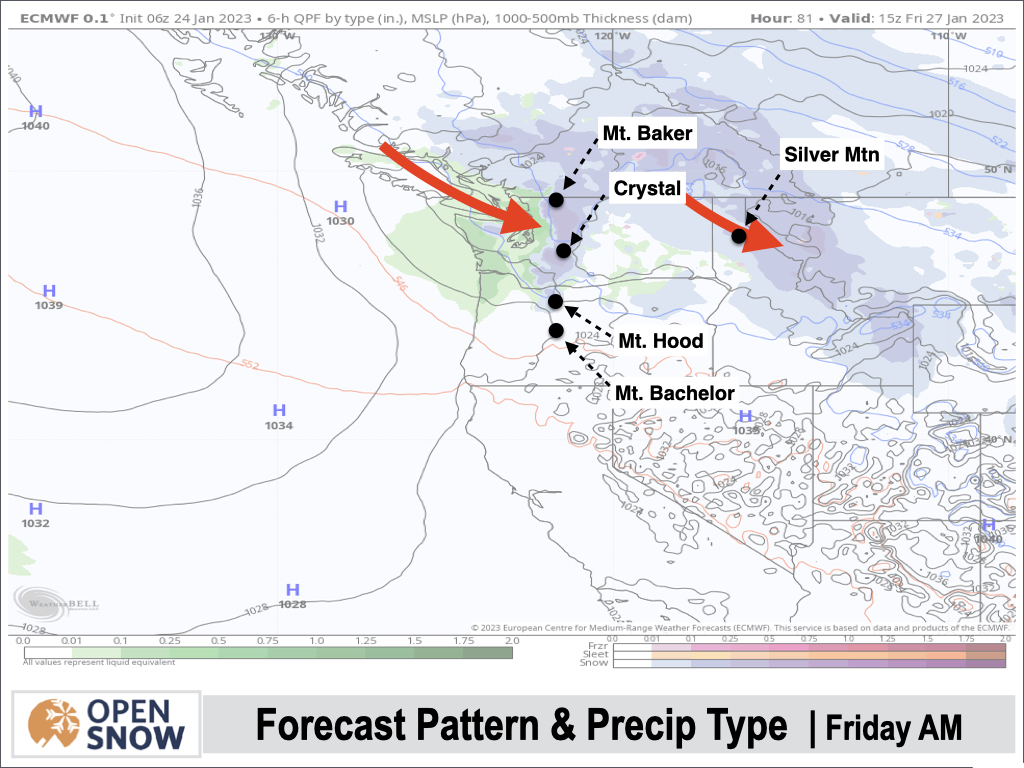 On Saturday, an arctic cold front will work its way from the north/northeast to south/southwest across Washington and into Oregon. At the same time, an area of low pressure will develop just off the Coast.

(Limited) moisture and energy will interact with the arctic frontal boundary to result in another round of snow developing across the PNW and moving southward with time. Where exactly the low sets up off of the Coast and the timing/position of the arctic front will influence when, where, and how much it snows on Saturday.

For now, it looks like Southern Washington and Northern Oregon will be the most favored areas for snowfall associated with the arctic front. Mission Ridge could also do well with upslope easterly winds helping to enhance snowfall rates. 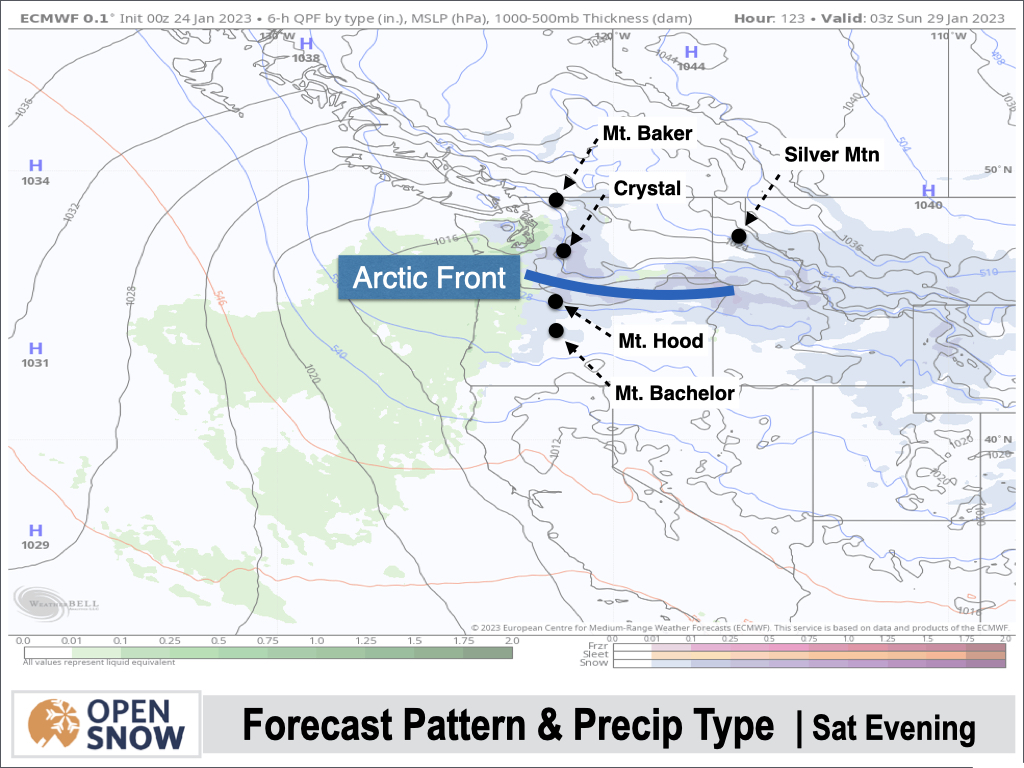 This storm will be lacking in moisture, but converging winds along the arctic front along with higher-than-usual snow-to-liquid ratios could lead to locally moderate to even heavy snowfall, so this will be something to keep an eye on moving forward. Snow levels should also be very low.

On Sunday, the low pressure system will be moving southward and likely taking most of the lingering moisture with it. Some models are hinting at light snowfall lingering across parts of Oregon and even Southern Washington, but overall I'm expecting a drying trend with well-below-average temperatures as modified arctic air takes hold across the region.

I'm seeing signs of a potential drying trend on January 30th-31st with below-average temperatures prevailing. Models are now hinting at a ridge of high pressure building over the Southwest U.S. and inching its way northward temporarily heading into the first few days of February.

It's possible we could still see a couple of weak disturbances move through from the west/northwest around February 1st-2nd, favoring Washington more so than Oregon.

From February 3rd-7th, long-range models are coming into better agreement of a more active storm track setting up across the PNW. Confidence is not super high since we're in the 10+ day range, but I'm fairly optimistic about improving snow potential during early February.

All three major medium/long-range models are projecting an above-average precipitation signal through the first seven days of February. 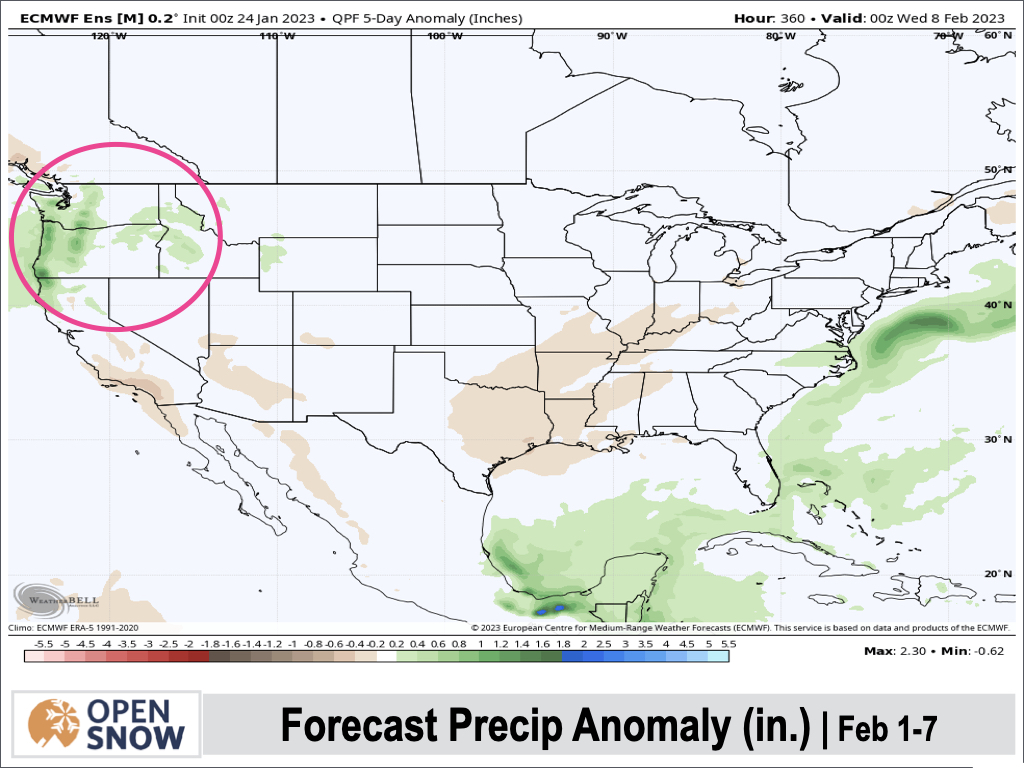 Also, temperatures are likely to remain colder than average through early February, which would result in low snow levels and good-quality snow. 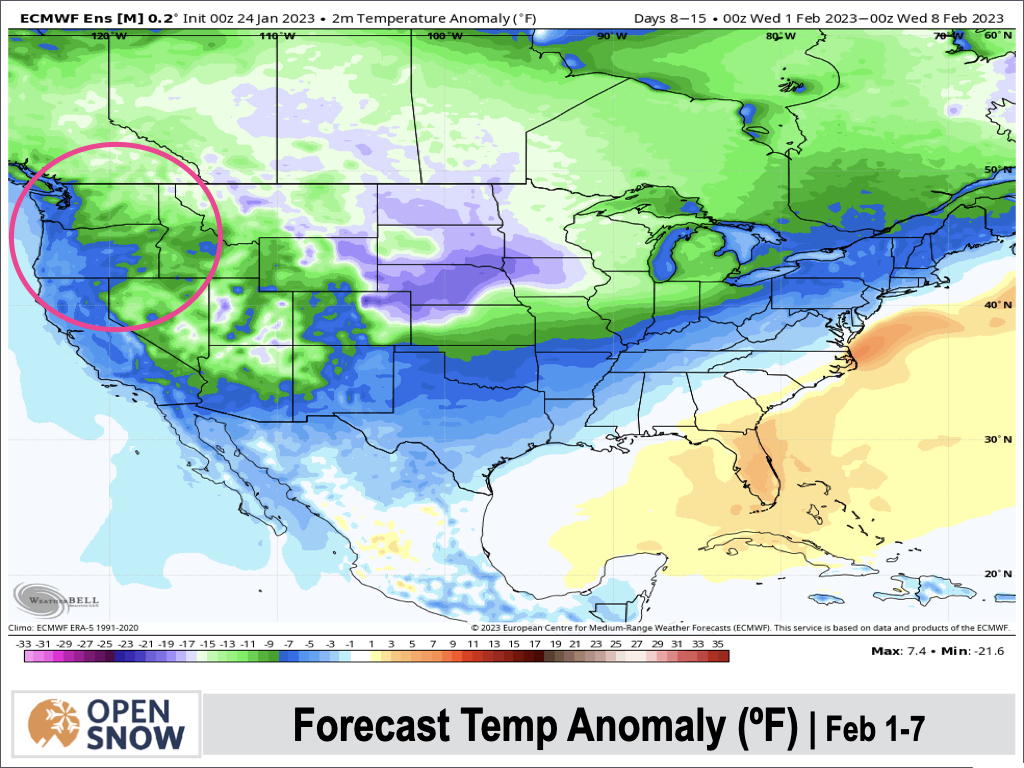