A low pressure system will spin up into Southern California today and draw copious moisture into the desert southwest, including Southern Utah. Snow for the high elevations with much needed rain in the valleys. Precipitation, while lighter, will also spread north into the Wasatch Mountains.

Our cut-off low system that we've been talking about for the past week or so is now finally approaching the coast of Baja California.  This will continue to meander northeast into SoCal and eventually stall out a bit near the NV-AZ-CA tripoint.  This will be a good spot to spin and draw up copious tropical moisture from the south.  Normally this would be a very warm event, but we have some backdoor cold air feeding in from the Rockies that will keep snow levels at least somewhat down.

Expect off and on snow in southern Utah mountains above 8000 feet tonight thru Friday.  Snow levels will start out higher (8k feet), but gradually lower thru the event down to 6500' or lower.  Total accumulations should be in the 12-18" range for the top of the Grand Staircase at Brian Head.  Higher amounts are possible where persistent moisture feeds and upsloping occur.

For Northern Utah, we are going to see a bit less moisture in both quantity and consistency. However, there still should be enough to bring showers to the Wasatch with snow falling at high elevations.  This is the current NAM portrayal of snowfall for the entire state: 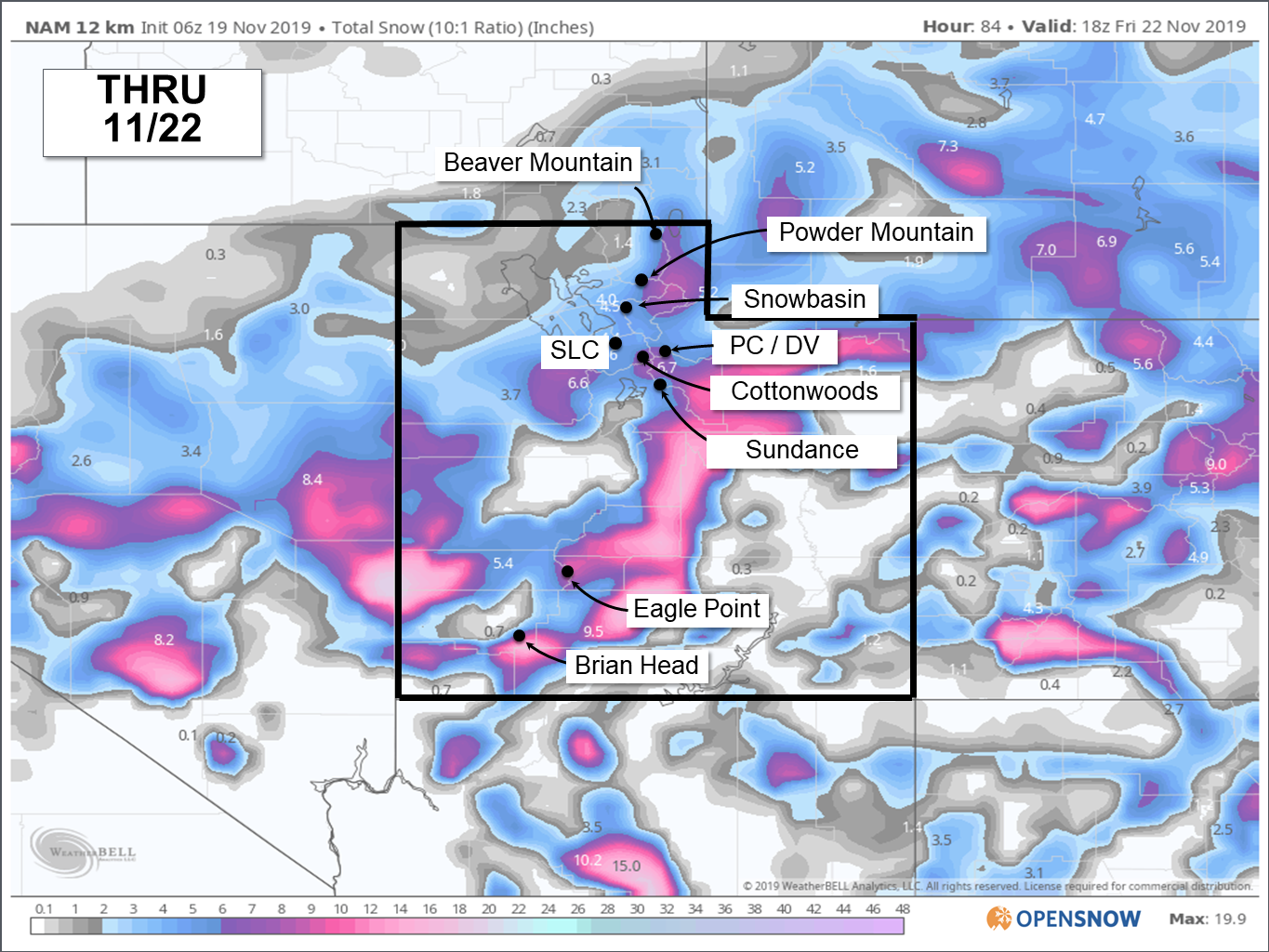 You can see that the eastern side of the "spine" of Utah gets hit fairly hard.  As you head up into the Wasatch proper, the snowfall amounts start to wane a bit.  Predicting the snowfall with this storm for the Wasatch is tricky.  This is not a typical storm by any standard so it's much harder for me to know what to expect in this situation.  We are also extremely dependent on exact track and how far north the moisture makes it.  A difference in 50 miles could be the difference in seeing no snow or 10" of snow.

The GEFS ensemble plume for the Upper Cottonwood Canyons reflects this uncertainty well: 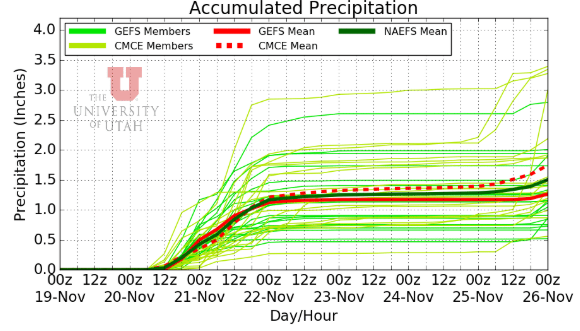 The darker green lines are the GEFS members.  You can see a range from 0.5" of QPF to 2.5".  That's a huge range!  Especially considering we are only 24-72 hours from the event.  The mean is just above 1" of liquid.  This would be a solid bit of snowfall if it were to verify.  But we just as easily could be on the low end.

The 12km NAM is now within range and shows the following for the Cottonwoods:

Over 8" of snowfall by midday Thursday.  That's about in line with the lower GEFS members.  Overall, because this is an unorthodox storm, I'm a bit hesitant to trust these numbers.  But it does illustrate that there is potential in at least the southern half of the Wasatch for decent snow accumulation.  My official forecast is 5-10" south of I-80 above 8000 feet -- with 2-4" north of I-80 by Friday.

We clear out again for the weekend with pleasant weather.  The pattern continues to transitions as the low pressure system this week ejects east and is absorbed by the storm track again.  Here is the synoptic pattern for Monday of next week (Nov 25): 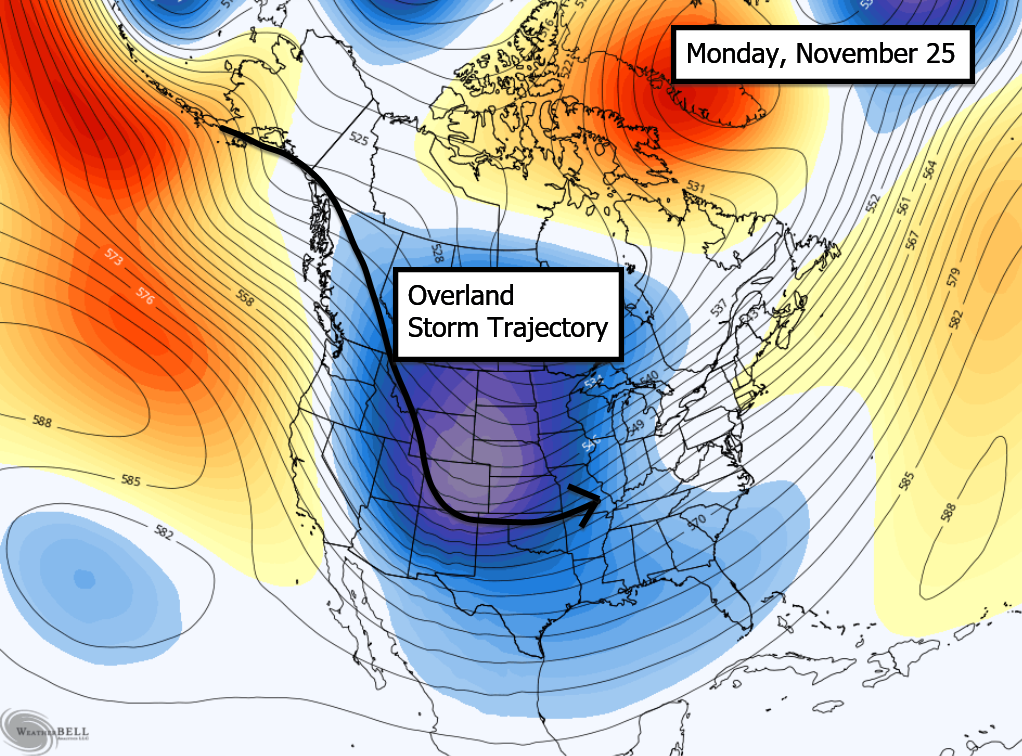 The trough axis should be to our east by just a bit.  Storms will drop in from the northwest but the continental divide could limit their strength.  They will also have an overland trajectory and be moving quickly so moisture will be limited.  The first of these systems should move thru Monday into Tuesday of next week.  Right now, it looks like a weakish storm with just a few inches of snow possible.  Colder temperatures however will aid in snowmaking.

The pattern continues to transition thru Thanksgiving holiday with the ridge retrograding (moving west) farther out into the Pacific.  This could allow stronger, more moist systems to impact the area as we move into December! 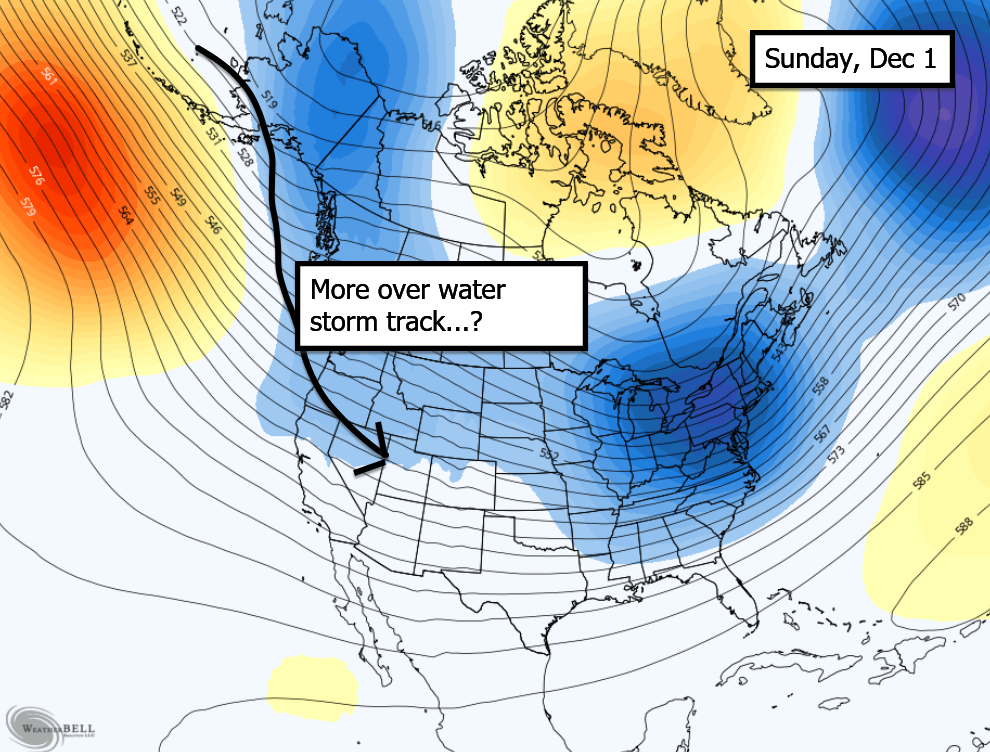 The hope is that this move over water trajectory will lead to bigger storms.  Still outside the 10-day confidence window, but models continue to show this unanimously, so confidence is building.

Brighton is opening TODAY!  I'm not 100% sure what will be open, but lifts are officially spinning again.

Both Solitude and Alta have pushed back their opening days from Nov 23 to Nov 29 due to low snow conditions.  Hopefully with the natural snow coming and colder temps, they should be able to hit those dates no problem.

I've been talking quite a bit about models and ensembles lately.  If you've ever wanted more explanation on what different models are and what it means to use their ensembles, I recommend you read our explanation article using the below link.

Also, I've written a guest blog for Ski Utah on how you can use some of the freely available models to forecast check the long range forecast for planning your powder chasing trip.