Do you ever wonder what meteorologists mean when they mention "models", and how these models are used to forecast the weather? Here's the breakdown.

What are weather forecast models?

Weather forecast models are computer programs that can help predict what the weather will be in the future, any time in the future from an hour to ten days out and even months ahead.

These forecast models take current weather observations collected from thousands of locations (such as wind speed, wind direction, air temperature, pressure, etc.), make an estimate about the current weather for locations where no actual data exists, and then use math and physics equations to predict what will happen in the future.

Below is an image from the "GFS" forecast model, showing areas of high and low pressure as well as precipitation. We can use an image like this to know where storms may be in the future.

There are many forecast models that cover the globe or smaller regions, and each model is developed with its own formulas in an attempt to be the most accurate.

Models that cover the entire globe

Two of the more well-known/used weather models are the European Center for Medium-Range Weather Forecast (ECMWF) a.k.a. the "Euro" model and the United States' Global Forecast System (GFS) model.

Both of these models cover the entire globe:

Models that cover a smaller area

Then there are mesoscale (fine-scale) models, which hone in on more specific regions and tend to be able to forecast really small weather features better than the global models, like thunderstorms or snowfall within steep mountains.

Weather models provide gigabytes of forecast data each time that they run. What we often show, and what you often see, are graphics and charts that are created from this underlying data. Here are some examples.

Here's a 16-day snow forecast for the United States and southern Canada from September 24 – October 10, 2019, from the American GFS model.

Here's a 16-day precipitation forecast for the United States and southern Canada from September 24 – October 10, 2019, from the American GFS model.

Here's a 16-day forecast for the weather pattern at about 18,000 feet. Blue colors help to identify storm systems. This is for the United States and southern Canada from September 24 – October 10, 2019, from the American GFS model.

First, forecast models differ in how they collect the current weather conditions across the globe. Even with a sophisticated measurement network including satellites, radars, weather balloons, ground-based weather stations, planes, and ships, forecast models must make assumptions to fill in the gaps between actual weather observations, in places like oceans, large forests, deserts, etc.

Second, forecast models differ in the math and physics equations that they use to move from the current condition of the atmosphere and turn that into a weather prediction. Small changes in these equations can lead to rather substantial differences in forecasts.

And third, forecast models have different levels of detail (resolution) and can struggle to properly account for steep terrain like the mountains where we ski and ride. This is where a local forecaster can help because they can adjust the model forecasts based on their experience of seeing when the model does a good job versus times when the model is less accurate.

All of these factors play a role in creating different forecast outcomes even though the models are starting with mostly the same information about the current state of the atmosphere.

Which forecast model is the most accurate?

Below is a chart showing the accuracy scores for 5-day forecasts for the northern hemisphere from several of the commonly used forecast models over the past 23 years.

The ranking from most skillful to least skillful is based on the one-year average accuracy of five-day forecasts. A higher number means that the model is more accurate. All four of these models cover the globe. While any model can more accurately predict a single storm, the European model has been and continues to be the most accurate. 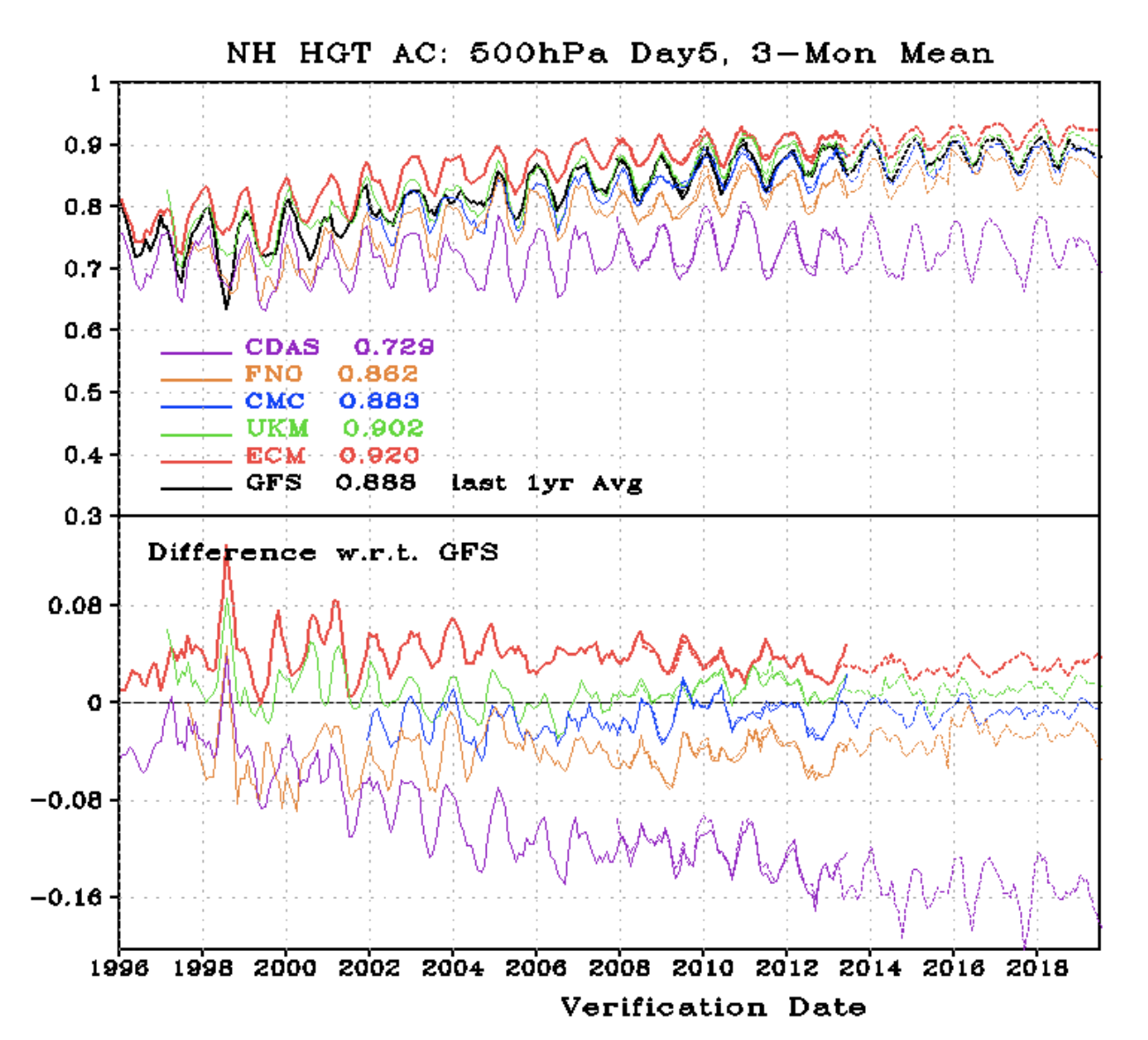 What are ensemble forecast models?

To account for both of these shortcomings, models are run many times with slightly different current weather conditions and equations. This produces a range, or ensemble, of many forecasts rather than a single forecast.

Each model has its own pros and cons. Most forecasters will look at several models and will take into account their own experience with the models as it pertains to their region when making a forecast. They should also tell you their uncertainty when the models disagree.

The forecasts made by the models are usually most accurate within 1-5 days, and then they lose accuracy the further out in time they go. This is because of the chaotic nature of weather, in which very small uncertainties in the current state of the atmosphere have a "butterfly effect" on the future.

Weather models have become more accurate over the last few decades, but are still far from perfect. As computer technology and scientific knowledge improve, the models will become more sophisticated continuing to lead towards more accurate forecasts.

Want to create your own forecast?

There are now many websites that allow you to look at the output from weather forecast models. Below are a few of the sites that we use. The free sites tend to have fewer details and options for viewing the models as compared to the paid sites.

Don't forget to download the OpenSnow app and stay tuned to our latest forecast updates throughout the season.