- Monday through Thursday we are expecting partly sunny to sunny skies and lighter winds, with highs in the 40s. A weak system moves through Tuesday night and could bring a dusting up to an inch of snow to the mountains. - Friday into Saturday the next storm could bring more rain and snow. We could see mainly rain on Friday with snow levels above 8,000 ft. and then more rain and snow is possible into Saturday with snow levels falling through the day. We could see several inches up to a foot of new snow on the mountains. - Going into the 3rd week of December, we could transition into a colder pattern with an active pattern possible the week leading up to Christmas.

For over 80 years, Hestra has kept cold hands warm. We have designed and crafted gloves for many different purposes – all of them with one thing in common: Timeless, uncompromised quality. We make gloves that - when taken care of, become more stylish with time. Visit HestraGloves.com to learn more.

It's a beautiful morning here in the Tahoe Basin with a blanket of fresh snow on the mountains. 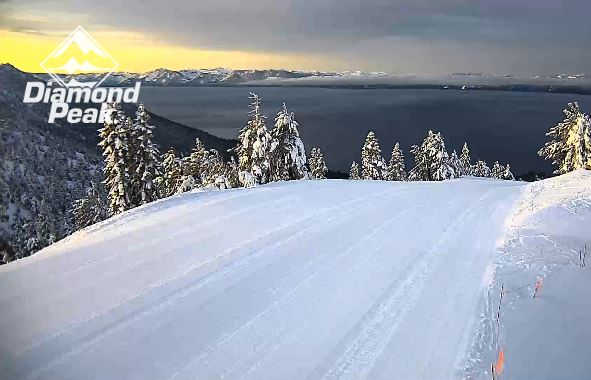 We have a mostly sunny and mild week ahead through Thursday, then we could see more precipitation into the weekend.

We saw lingering snow showers Sunday morning, mainly northwest of the lake along the crest. That dropped a final 2-4 inches of snow for those mountains, with little to no snow for the rest of the area as the storm cleared out. The sun came out and the soft snow became thicker through the afternoon.

Storm totals ended up at 16-27 inches for the ski areas around the lake, a little less to the south down near Bear Valley and Dodge Ridge with higher snow levels down there. The final forecast on Friday for the storm was 14-27 inches, so the storm performed as expected. 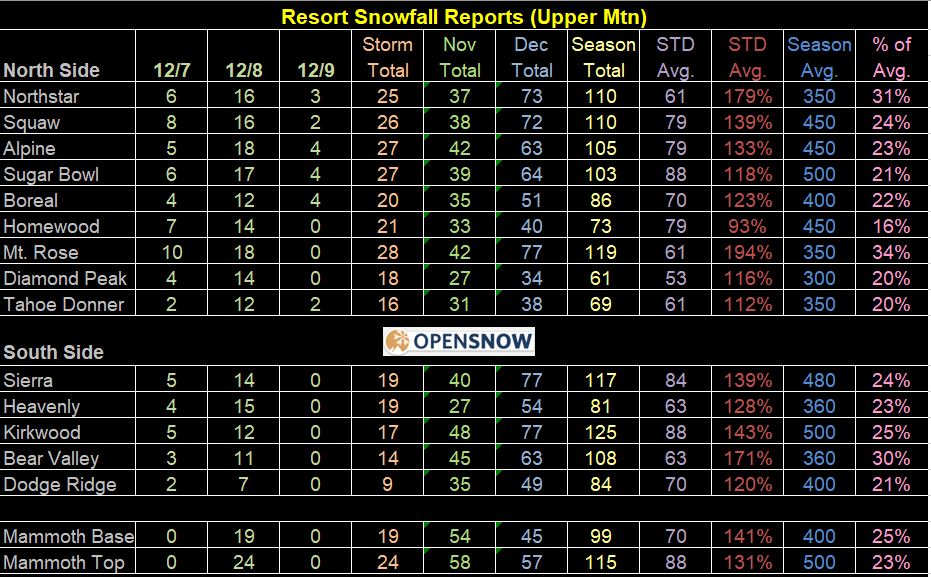 8 out of 14 ski resorts are now over 100 inches for the season. That didn't happen until the end of the first week of January last season, so we are pacing about a month ahead of last season so far. Here are the current stats summarized for all of the ski areas. 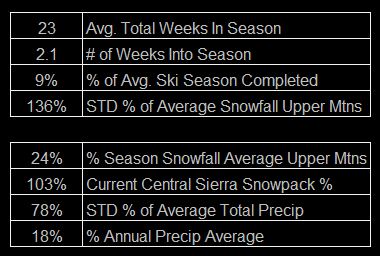 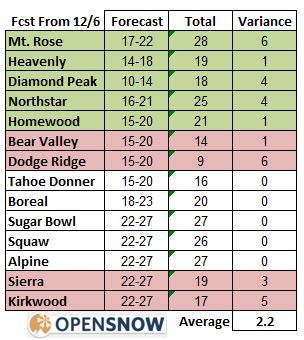 I don't like going over 2 inches, but the daily average so far this season is at 1.8 inches, and the storm and 4-year averages are both at 1.7 inches. Shoot for accuracy, honesty when you miss, and fine-tune the forecasting process. Rinse and repeat...

Conditions out on the mountains were pretty good yesterday even with the warmer air making the snow a little thicker by afternoon. The upper mountains are buried and in great shape for early December. Here's a shot of my buddy Ken at the top of Squaw yesterday. 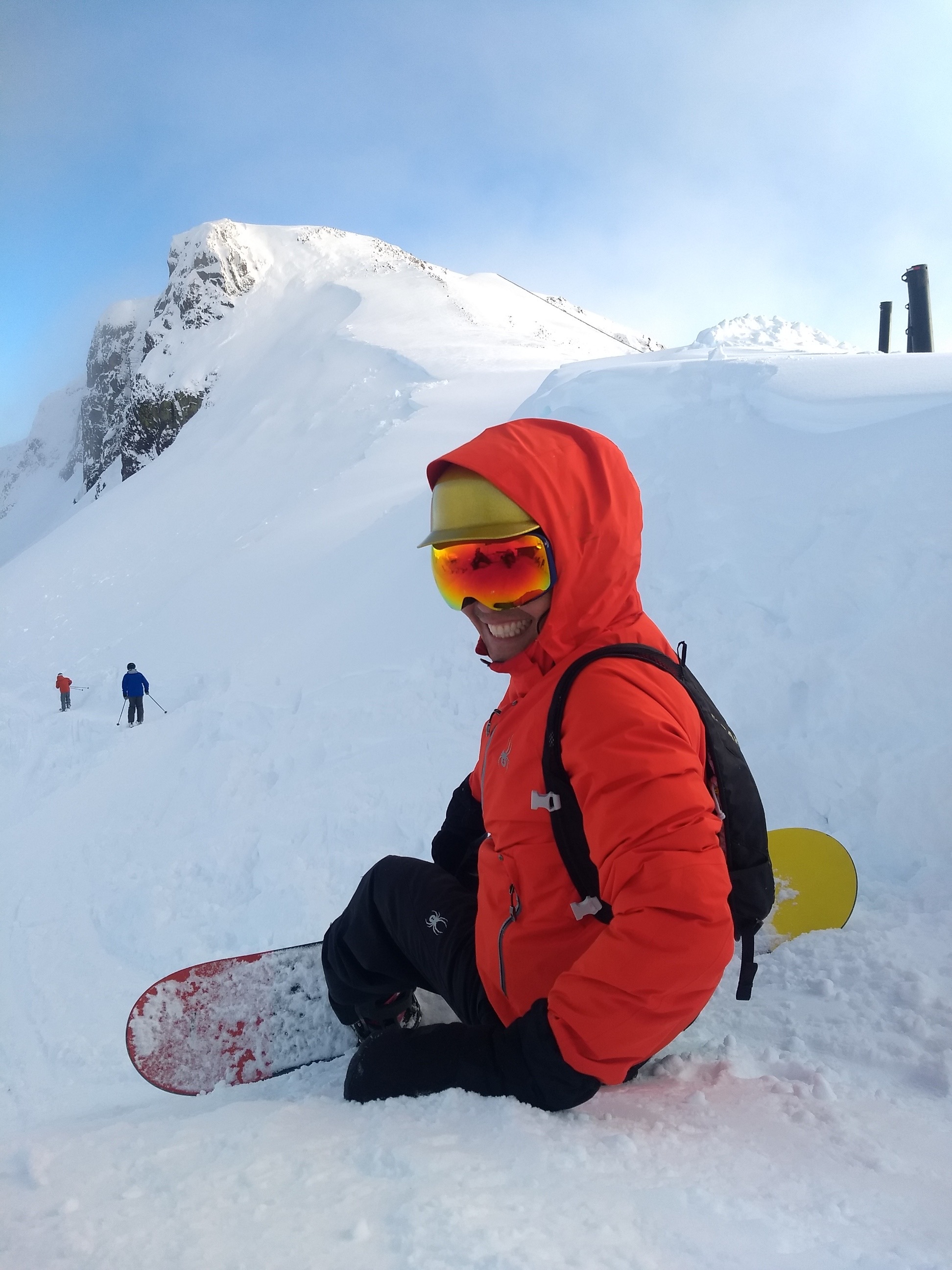 Photo by Sam "the man" Hamilton

Unfortunately, this was also the last photo of Ken before he dropped a cliff and busted his foot, and had to be brought down by ski patrol...

Partly to mostly sunny skies expected through Thursday with highs in the 40s. The exception being Tuesday night into Wednesday morning when a weak and fast-moving system moves through. Snow levels should drop to lake level overnight. The latest forecast models show little precipitation reaching Tahoe. 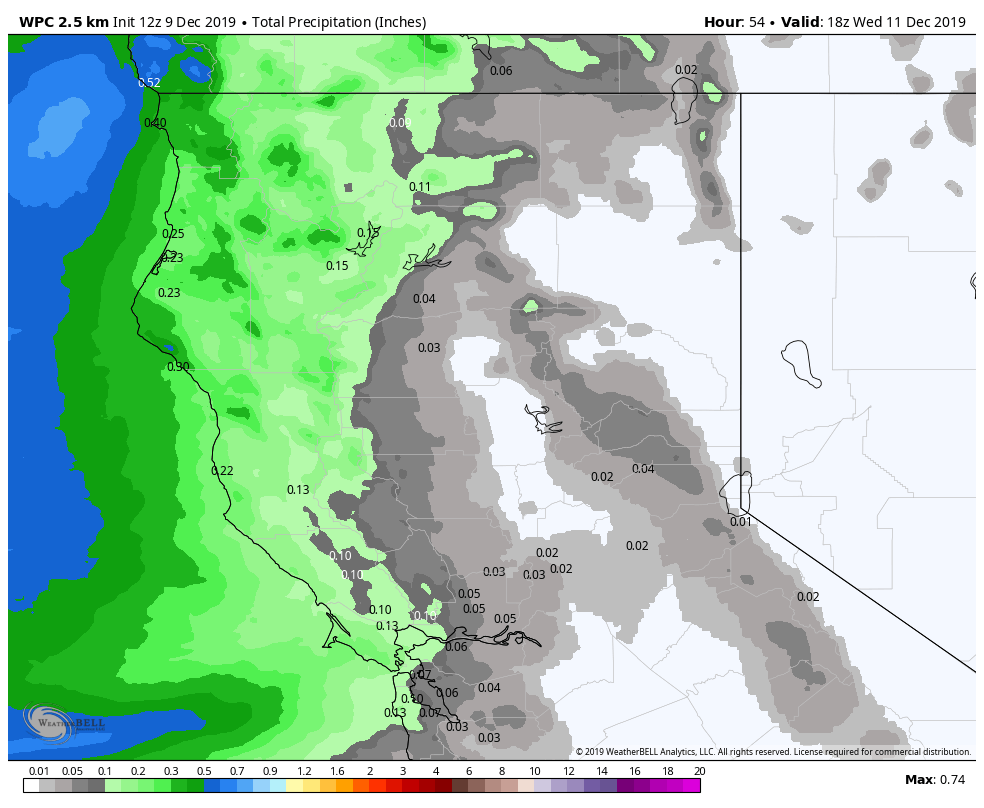 The GFS is a little wetter showing up to an inch of snow near the crest, but I wouldn't count on more than a light dusting right now. Then mild again Thursday.

We have yet another AR headed for Northern CA Thursday night. It looks pretty weak for Tahoe but it's plenty warm tapping into moisture from near Hawaii. 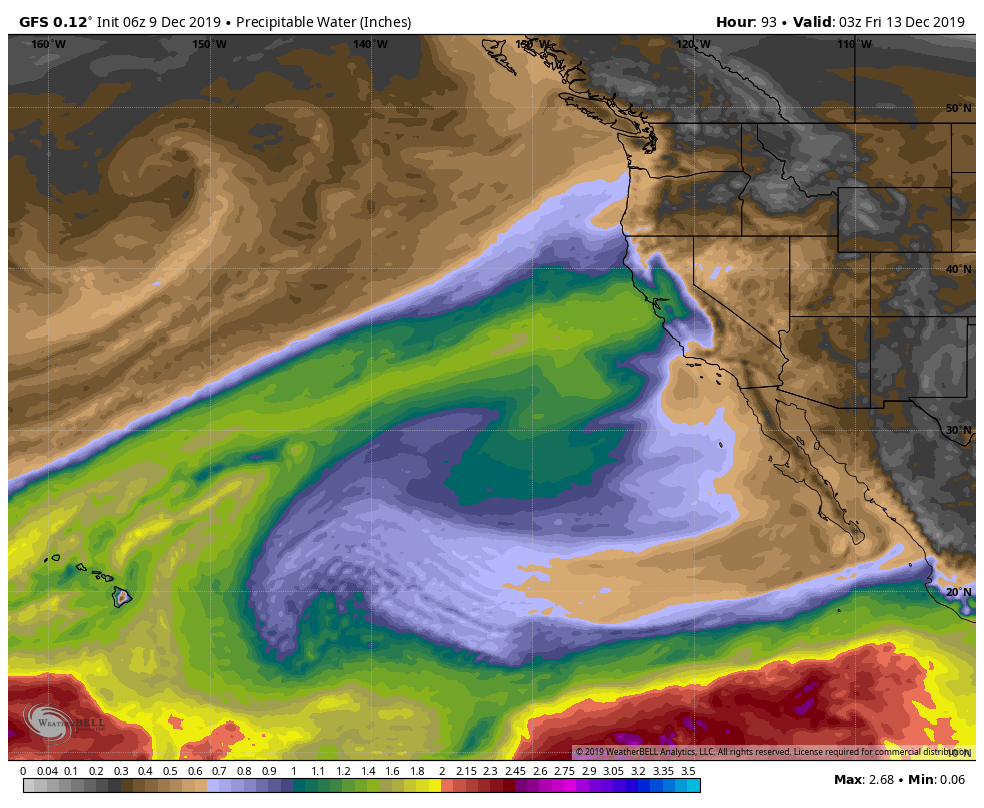 We start out on the warm side of the jet stream with snow levels starting out above 8500' Thursday night. The forecast models are not in agreement yet on the amount of precipitation and how fast colder air works in through Saturday.

Taking the model average, we could see light-moderate precipitation Thursday night into Friday with snow levels lowering to around 7500' by Friday afternoon. Maybe 1-3 inches of wet snow above 8000 feet. Then there could be a break on Friday night.

Then a question of the track of a system dropping down from the northwest Saturday. Some model runs like the European model show a wetter system Saturday, while the GFS is drier. The total model average for total precipitation through Saturday is around 1.4 inches near the crest. 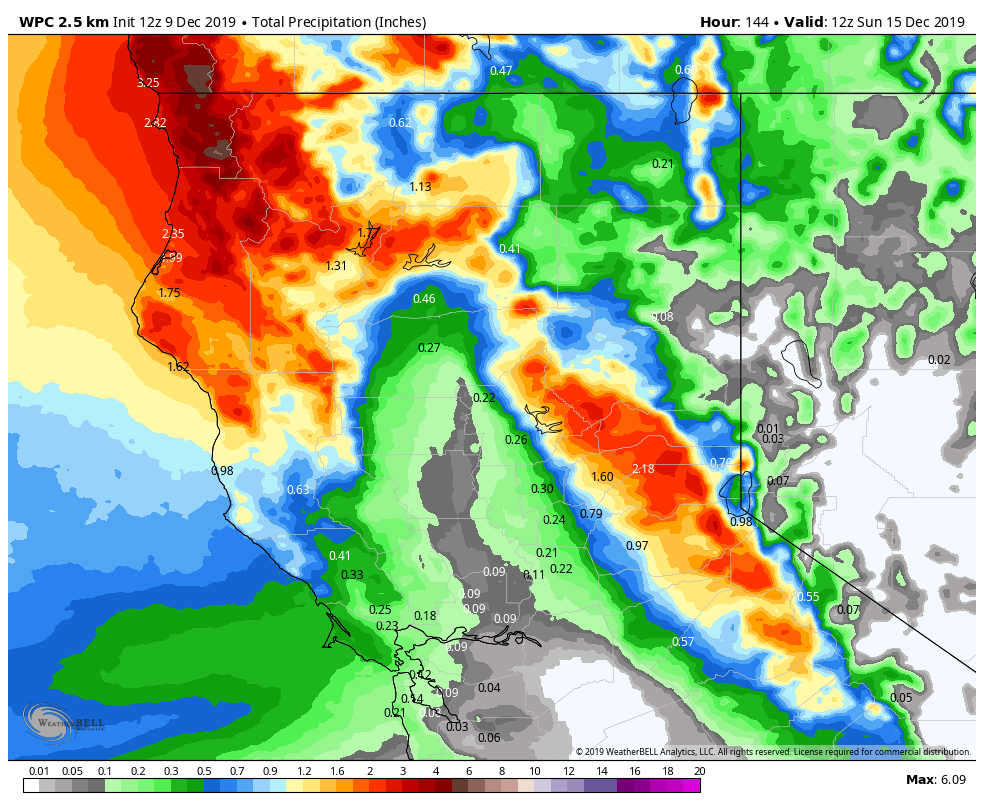 The GFS model pushes in the colder air pretty fast Friday night into Saturday, with snow levels dropping below lake level, other models are slower. A lot of questions to iron out over the next few days. Based on the above scenario of light precip and mostly rain through Friday, then possibly a colder scenario for Saturday, here is the initial look at potential snowfall by Saturday night. 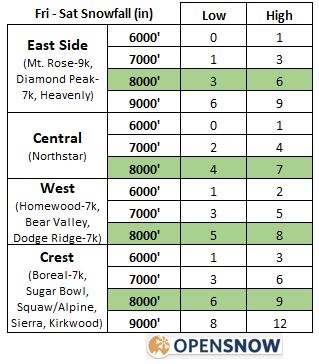 Maybe a dust on mush scenario for the mountains? We will be fine-tuning the forecast all week.

The long-range models still show a deep trough setting up over the West Coast for the week leading up to Christmas(18th-24th). 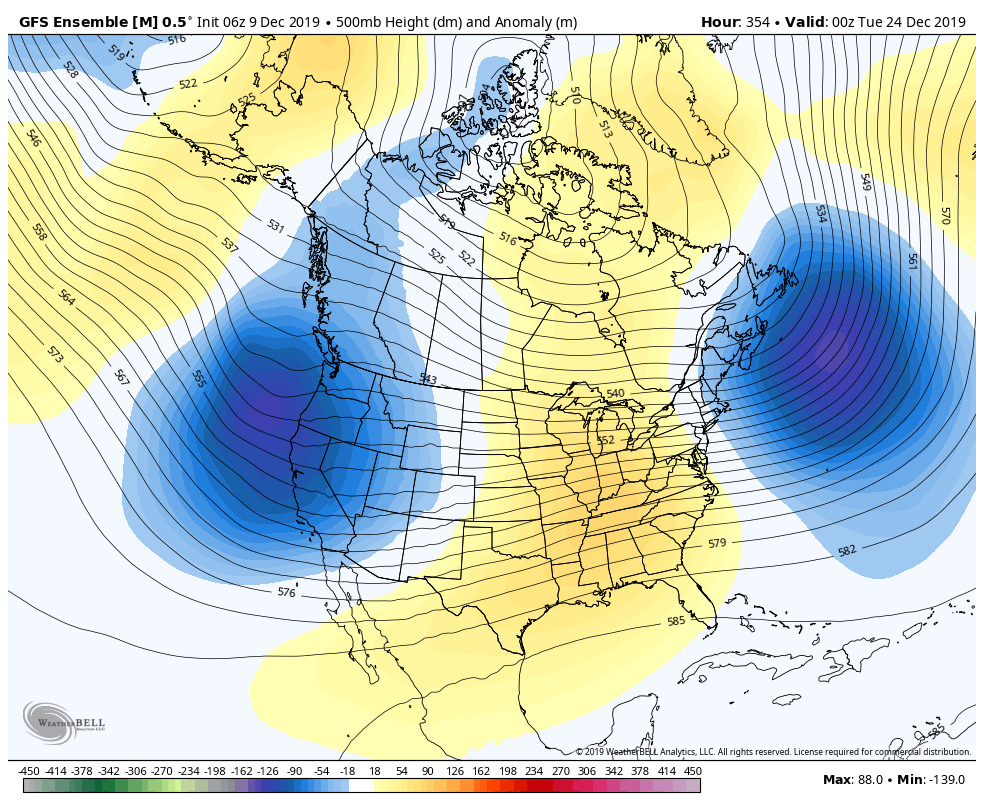 That would continue the colder pattern. It would also keep the storm door open. We only talk about potential patterns more than a week out due to model inaccuracy out that far. But looking through the deterministic model runs, they do suggest we could see several colder systems.

After all of the rain and wet snow building a base, we will be ready for some colder storms and drier snow. Hopefully, the forecast holds.

We have special edition OpenSnow apparel that is available to buy only for a limited time! 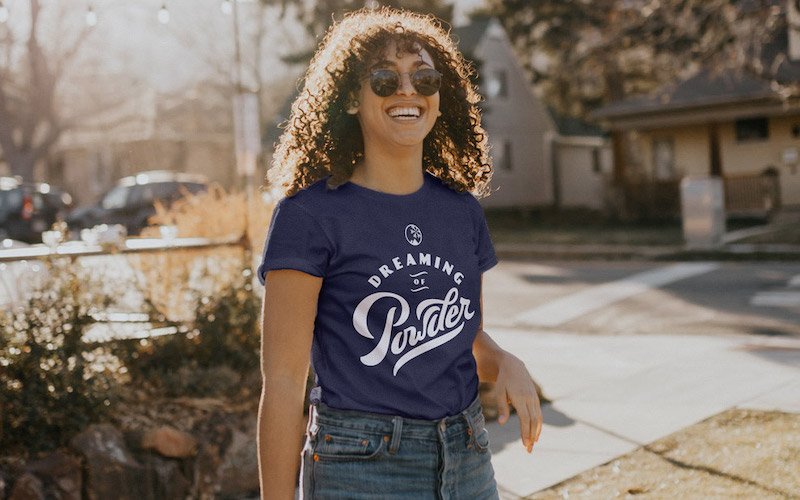 Order by December 18th for delivery in January 2020.