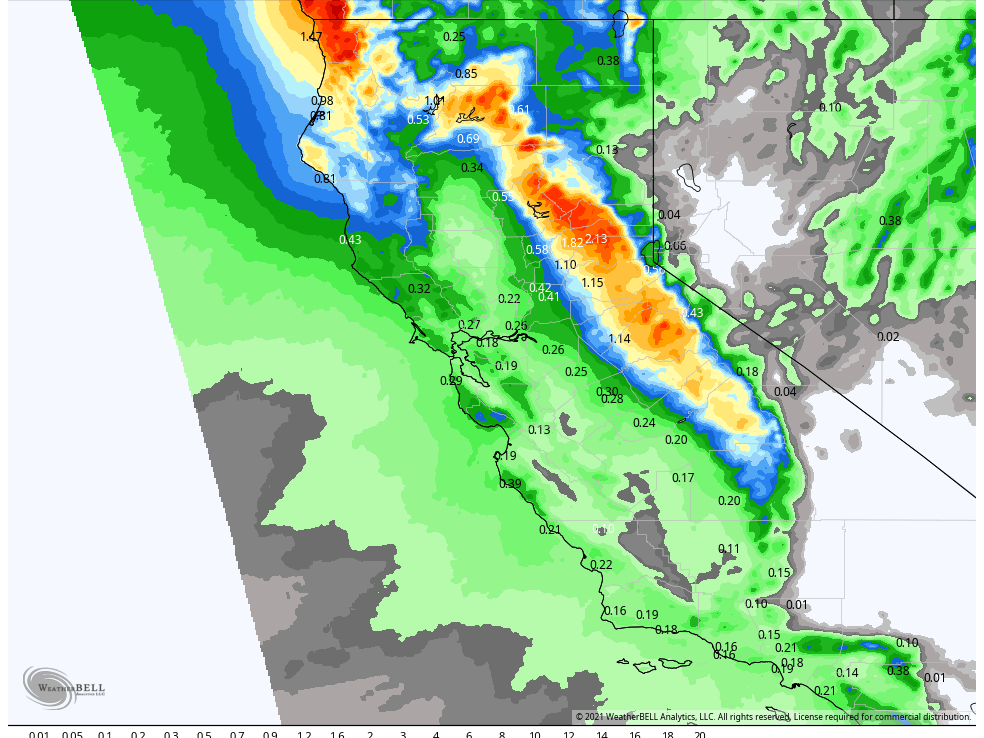 Mostly sunny through Friday. A late-season storm moves in Saturday with a few showers possible. Then heavier precipitation with snow to lake level Sunday into Sunday Night. Snow showers possible Monday. Then drier and warming by the middle of next week. A chance for showers later in the week.

The main feature of this late-season forecast will be the cold storm moving in this weekend. We just have Squaw/Alpine & Mammoth Mountain still open in CA, but this storm is fairly strong and cold for late April and will affect travel.

We saw a few showers around Tuesday afternoon. The best chance for any showers to pop up Wednesday will be south of the Tahoe Basin. Expecting mostly sunny skies through Friday. Highs in the 50s to near 60 degrees at lake level.

We have been tracking this storm all week. Not much has changed except that some models like the Canadian model are trying to split the system to the south with much less precip than other model runs that hold it together.

The GFS model is the earliest in bringing in clouds & the chance for scattered showers Saturday. Most models hold off showers until Saturday night. The main story for Saturday may be colder air, increasing clouds, & strong winds. Highs only in the 40s to around 50 degrees at lake level. Snow levels around 7500-8000 ft. Ridgetop winds gusting from the southwest up to 80+ mph likely closing some upper mountain lifts at Squaw.

Colder air looks like it will move in Saturday night ahead of the surge of moisture for Sunday. Snow levels may fall below lake level Saturday night with lighter precipitation moving in. Maybe a coating up to a few inches of snow on the mountains, highest amounts west of the lake along the crest.

Sunday is when we are expecting the heaviest precipitation to fall and snow levels could stay between 5000-6000 ft. all day. That means we could see all snow to below lake level. Highs only in the 30s and the strong winds continue with ridgetop gusts of 60-70+ mph continuing. We could see several inches of snow on the mountains into Sunday night. It will be harder for snow to accumulate at lake level until the sun goes down, but under heavier bands, we could see some wet snow accumulate. 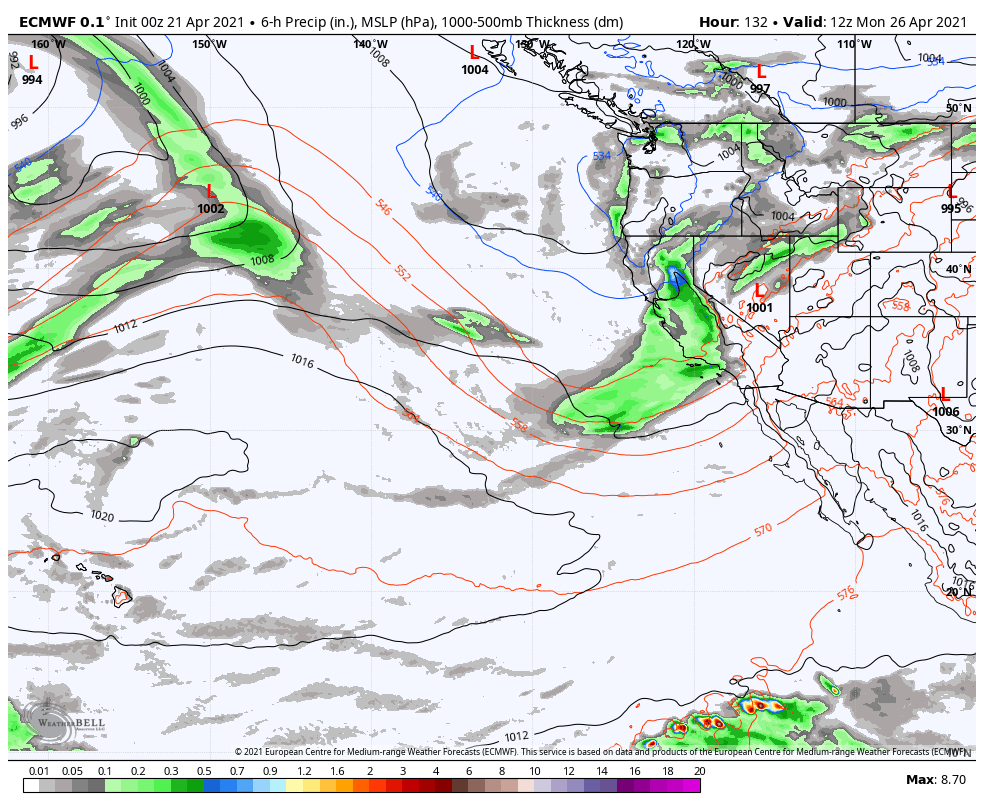 Snow showers could end by Monday morning with a few models lingering showers into Monday morning before the storm clears Monday. It stays cold Monday with highs in the 30s on the mountains and 40s at lake level. The winds will finally start to come down on Monday. 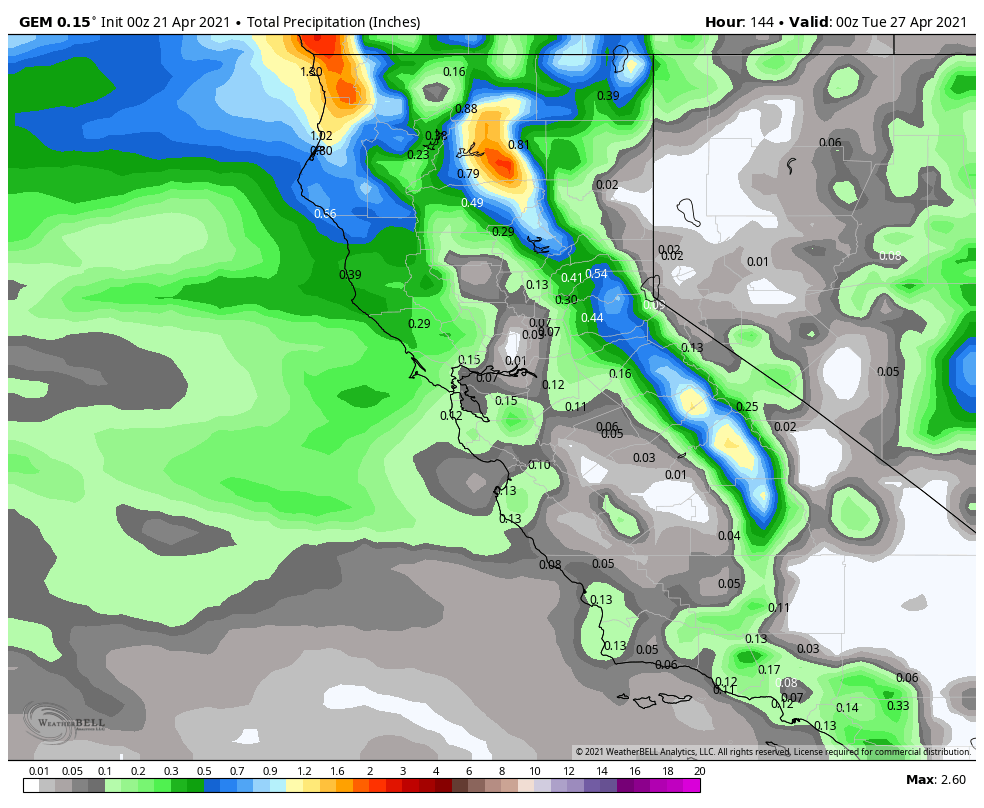 The ICON model is leaning in this direction as well. On the other end, the GFS & European models have over 1.5 inches of total precip west of the lake along the crest with up to 0.9 inches on the east side of the lake. They have decent ensemble member support. 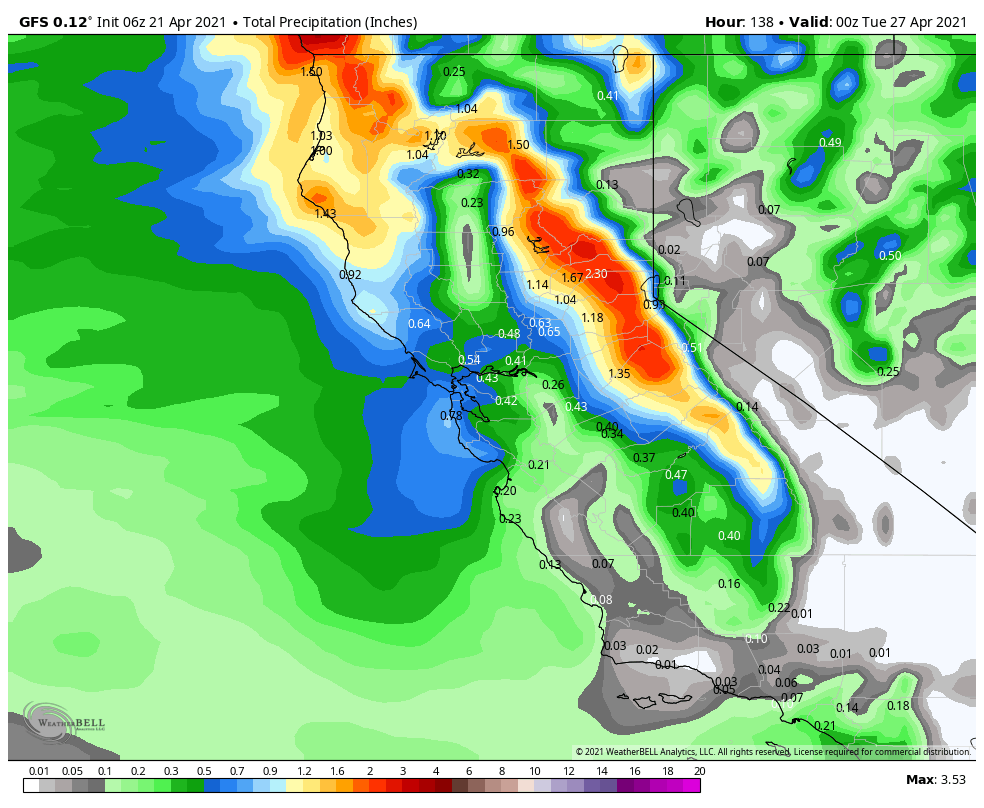 The total model average this morning is around 1 inch along the crest. Here is a look at the WPC's blended model through Monday. 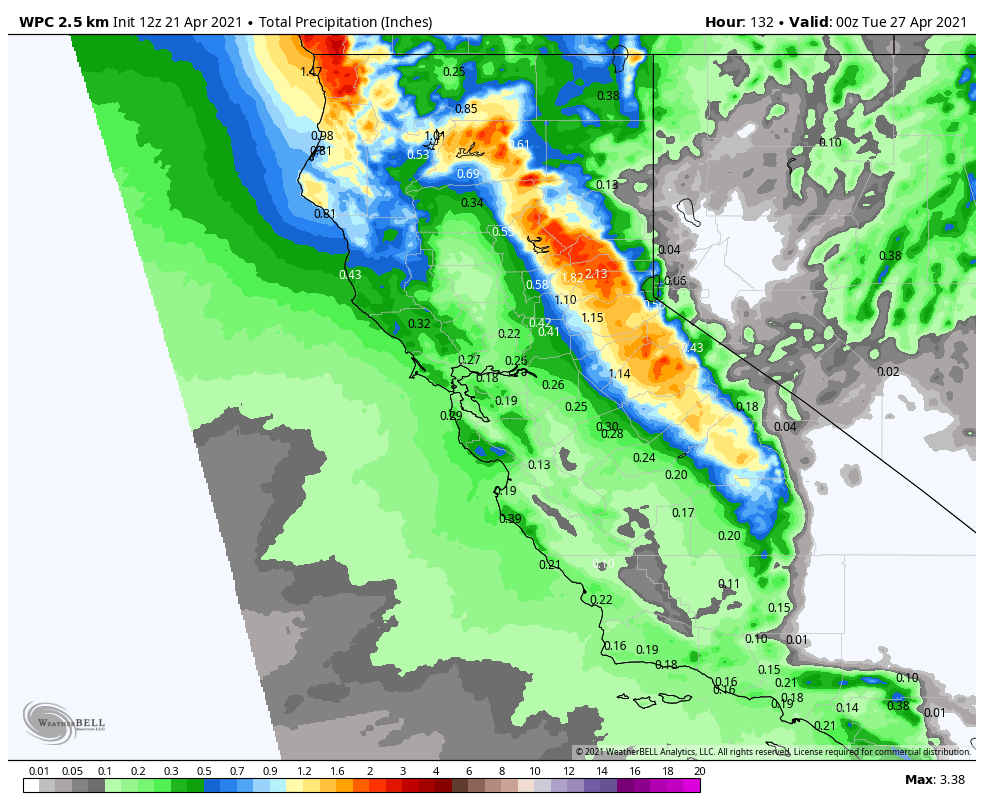 Snow levels start high Saturday but fall quickly Saturday night and should remain below lake level through the end of the storm per the latest model runs. Snow ratios on the mountains up to 12-16:1 by Sunday night with an average around 12:1 at 8k. That could make for some soft upper mountain snow for a powder day Monday morning.

If the split happens we will have to drop the snowfall forecast dramatically. Right now here is the initial forecast using an average of the latest model runs. 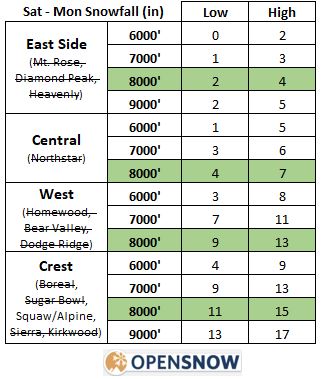 On the high end, the GFS model would bring up to 20" of snow to the highest peaks by Monday morning. We will continue to fine-tune the forecast daily.

By Tuesday high pressure is building back in over CA with sunny skies and warming temperatures into Wednesday. Highs back into the 50s at lake level and 40s for the upper elevations. 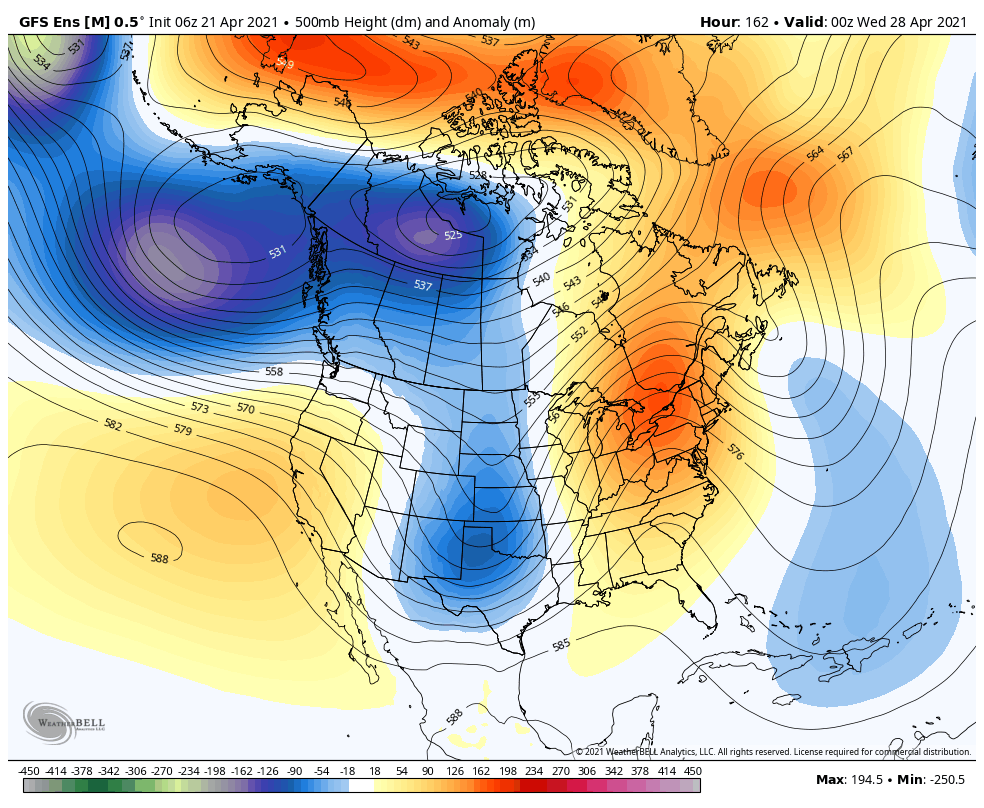 There is a strong storm that could pick up some moisture from the typhoon in the western Pacific before it moves into the Pacific NW by next Thu-Fri. The latest model runs keep most of the precipitation to our north but we could see some showers if the system pushing far enough south.

We will keep an eye on that. There could be other systems that move through to our north and east through the 1st week of May that bring a chance for showers, but overall it looks like we could be done with significant storms after this weekend. Of course, we will be watching just in case May wants to bring us any snow.