Cool and wet pattern ahead for the West 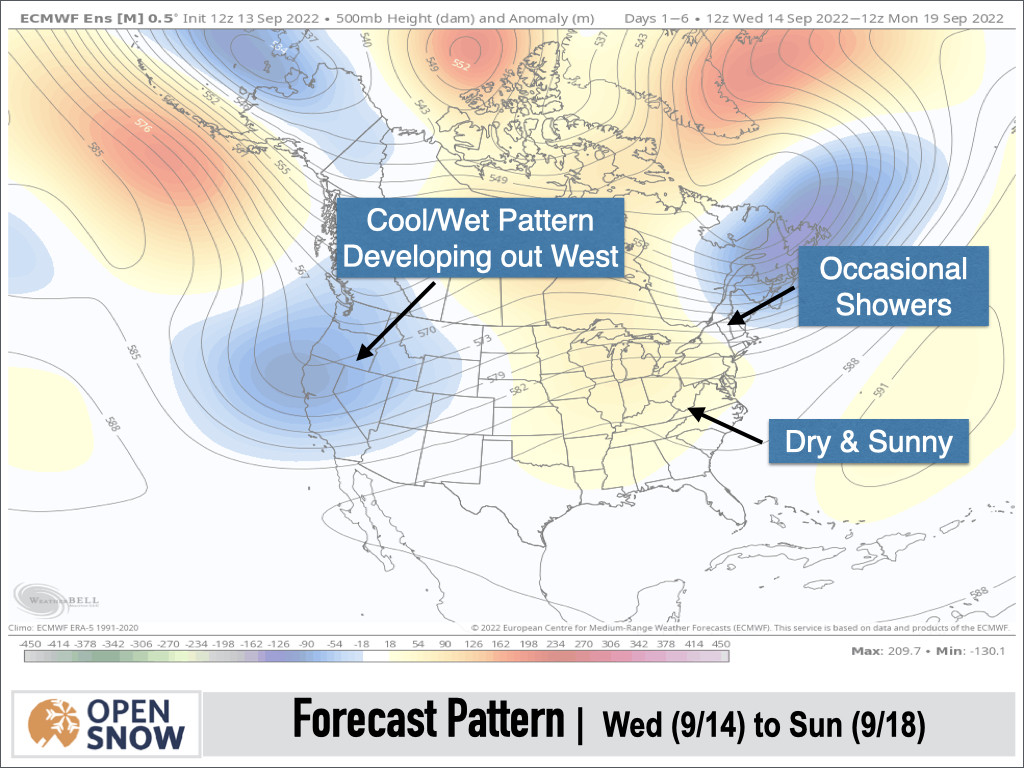 The heatwave has come to an end across the West, and a much cooler & wetter pattern is developing, with moisture from the remnants of a Pacific hurricane contributing to multiple rainy days across the Central/Northern Rockies. This pattern will help with fire & smoke conditions, and high elevations will see some snow as well. The East will be drier except for occasional showers in New England.

A welcome pattern change across the West after last week's heat

Early September brought record-breaking heat and smoke to the West, but changes are on the way. A trough of low pressure is setting up across the West, which will support cooler and more unsettled conditions. Southwest winds ahead of the trough will also transport moisture from the remnants of Hurricane Kay into the Central and Northern Rockies, with a prolonged stretch of wet (and for the higher peaks, snowy) conditions.

The East will head into a drier pattern with pleasant early fall conditions, though Upstate New York and New England will see some showers around mid-week and again over the weekend. For the Upper Midwest, a wetter pattern is expected across the Northern Great Lakes region along with mild temperatures. 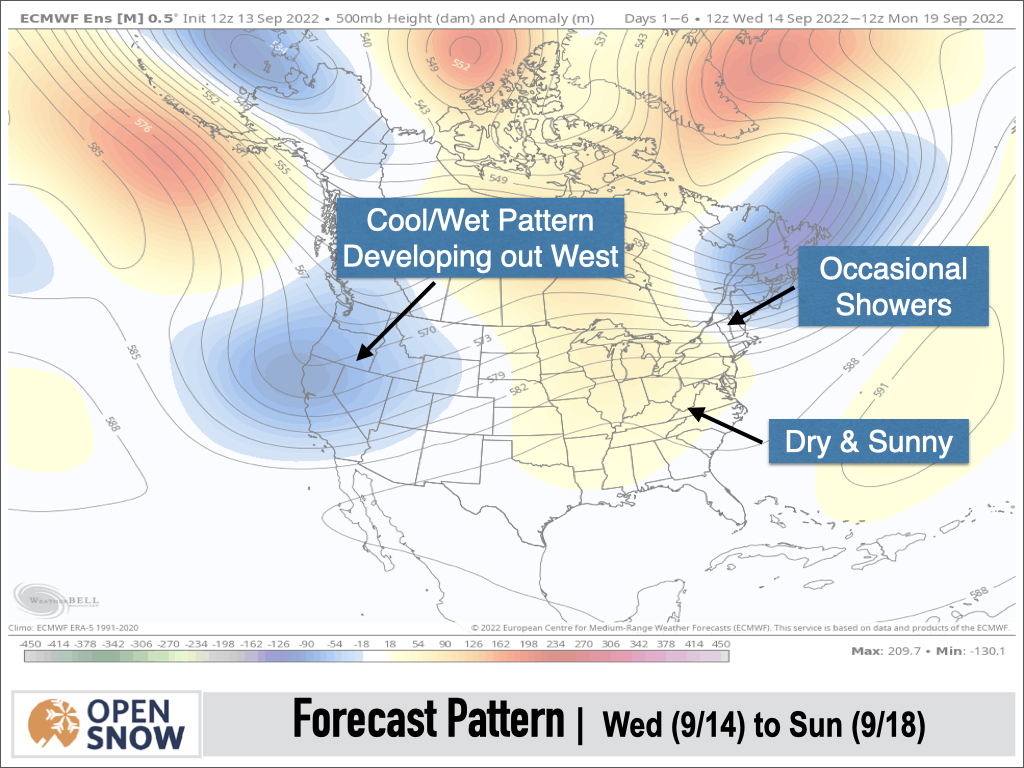 Check out the 7-day preicpitation projection from NOAA's Weather Prediction Center for the Lower 48 and Southern Canada. The heaviest rainfall is expected from the Wasatch to the Tetons/Yellowstone and into Southwest Montana. 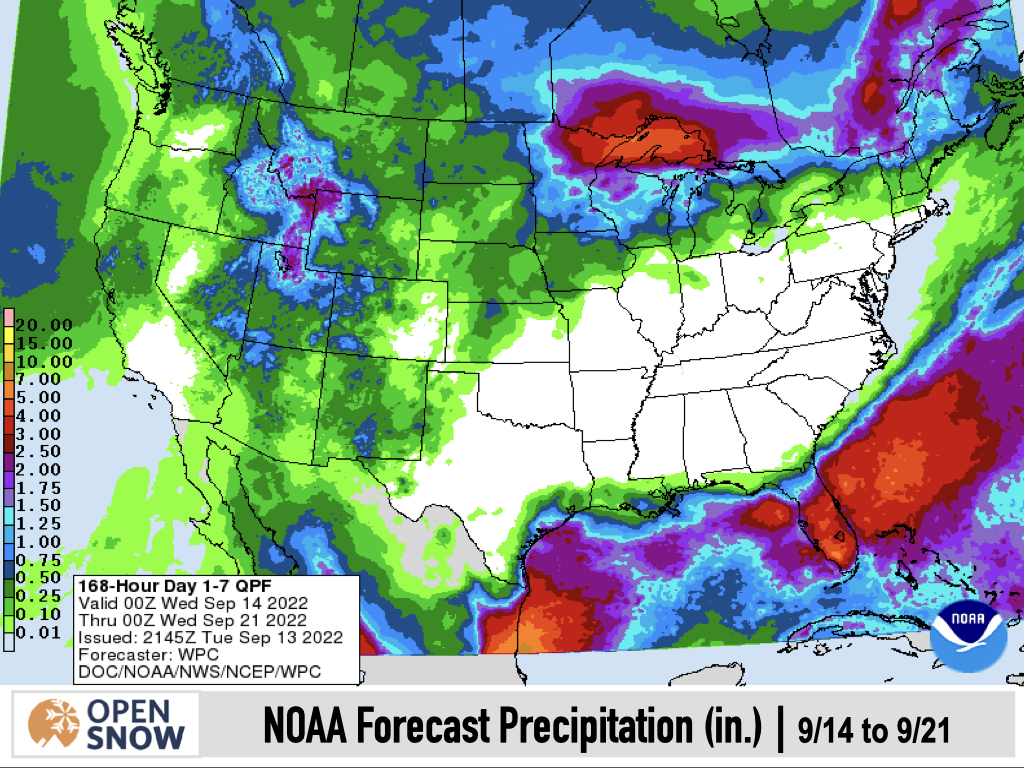 Over the next five days, temperatures will also be below average west of the Continental Divide, which will be a welcome change for many areas. The Central U.S. will see above-average warmth, while the East will be relatively close to average. 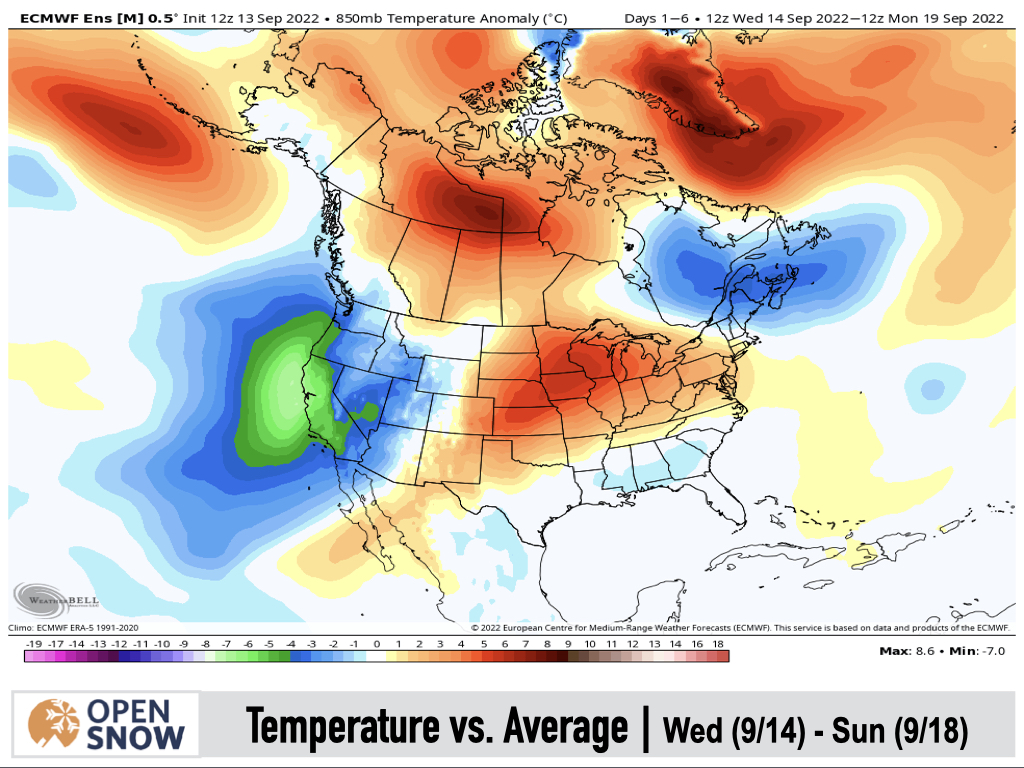 It's been a rough couple of weeks for fires across the West with large fires burning in Idaho, Montana, Oregon, California, British Columbia, and Alberta. Wetter and cooler conditions over the next week should lead to reduced fire behavior and a gradual improvement in smoke conditions.

The Mosquito Fire in California may not see as much help initially, but could see more relief this weekend and early next week as precipitation chances increase and colder air arrives.

Here is the smoke projection for Wednesday afternoon, with improvement expected in the days to follow. Be sure to keep up with our Smoke Map and Air Quality Map for the latest. 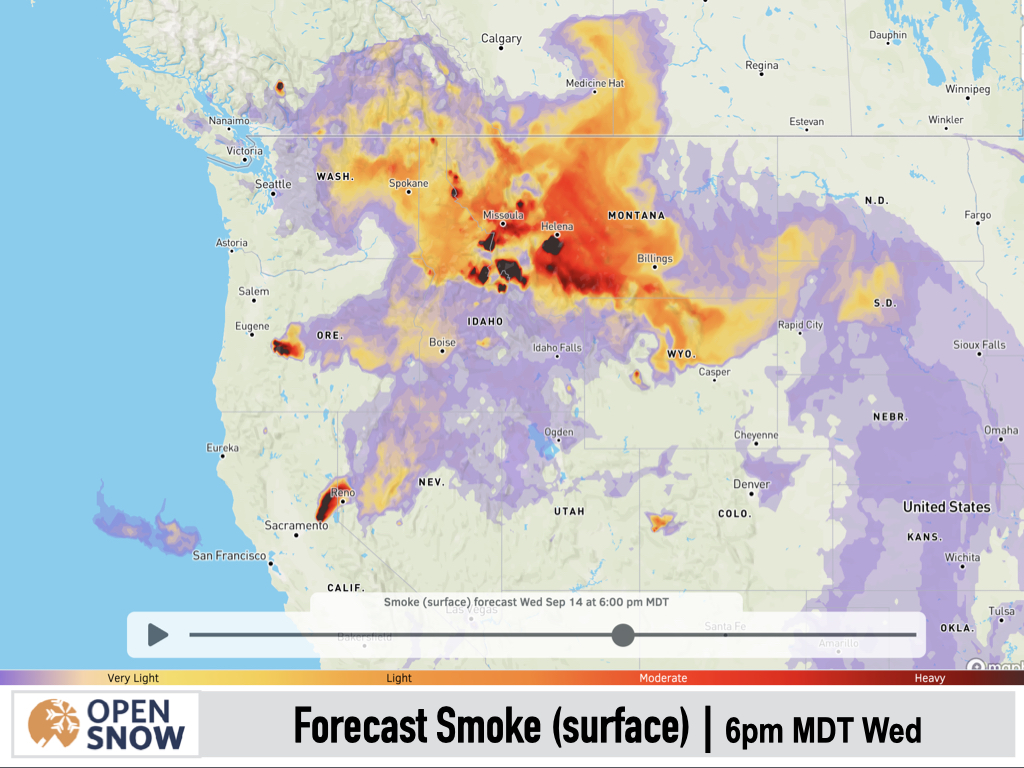 Alaska will continue to see most of the action in terms of snowfall, favoring areas above 4,000-5,000 feet. Most areas in the West will see rain during this period, though the tops of the higher peaks in Colorado (above 12-13k feet), and Wyoming and Idaho (above 11-12k feet) will pick up some snow as well. Same goes for the Canadian Rockies near the AB/BC border with some higher peak snow expected.

Heavy rainfall rates will be possible across the Great Basin and Central/Northern Rockies during this period due to the tropical origins of the moisture. Flash flooding will also be a concern across slot canyons and dry washes in the canyon regions, as well as burn scars.

Further east, New England and Upstate NY will see some showers on Wednesday before drying out on Thursday. The Northern Great Lakes will see heavy rain arrive on Thursday. 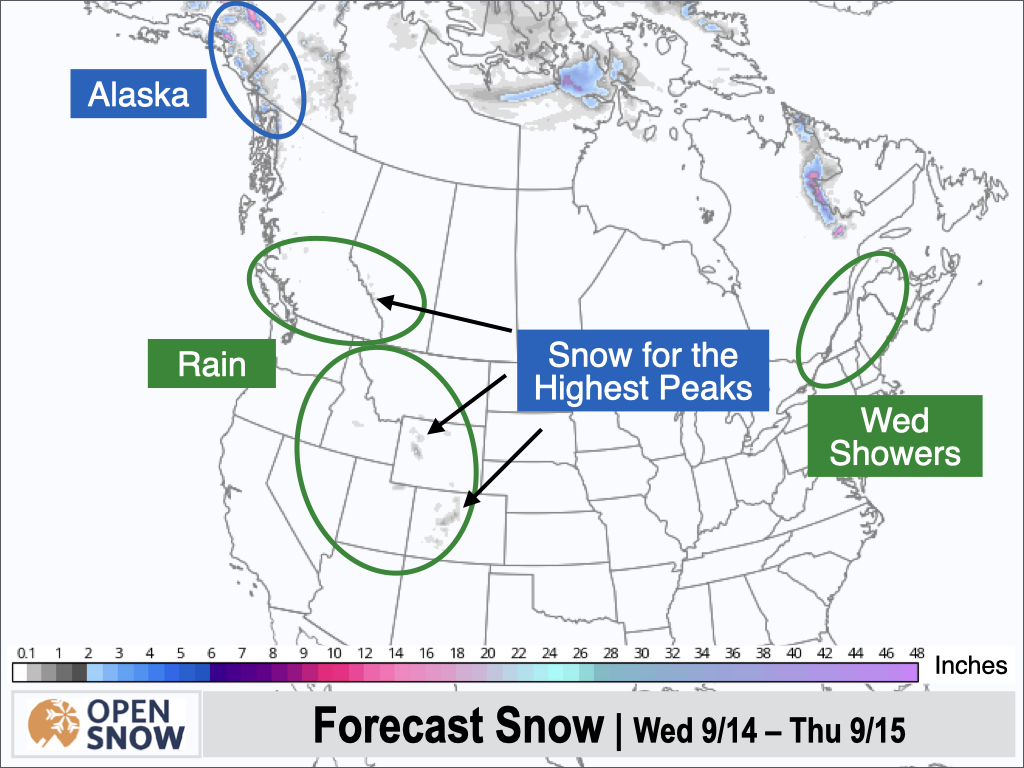 Moisture will linger across the West during this period with a couple of disturbances arriving from the Pacific, resulting in showers from Oregon/NorCal into the Northern and Central Rockies. Temperatures will gradually trend cooler during this period, which will in turn result in a gradual lowering of snow levels, with higher elevation areas from Oregon to Wyoming picking up some snow.

High elevation snow and low elevation rain can also be expected across BC and near the Continental Divide in Alberta. Further north, Alaska will pick up more snow above 4,000-5,000 feet as well.

Further east, the Great Lakes will remain in a wet pattern while the Northeast will stay dry on Friday before lighter showers arrive on Saturday. 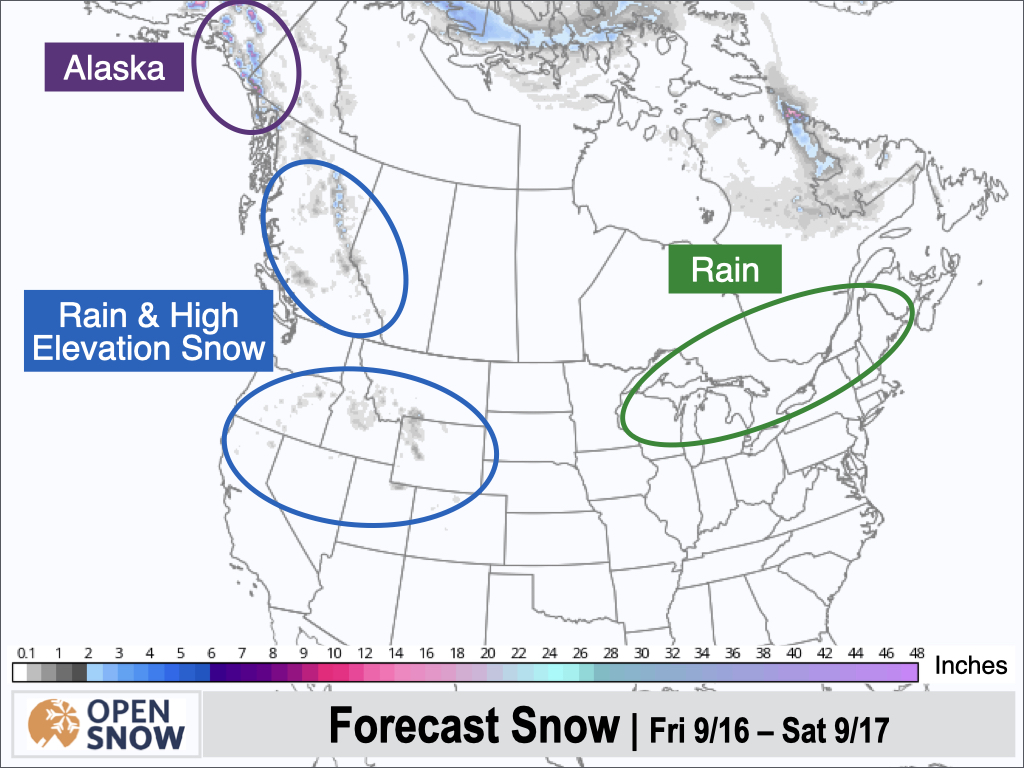 A storm system will move into the West during this period, though confidence is low regarding the storm track and timing. However, temperatures will continue to trend cooler during this period which should result in an additional lowering of snow levels.

Right now, the most favored areas for high elevation snow and low elevation rain include the Sierra, Wasatch, Sawtooths, Tetons, Western Montana, and the Canadian Rockies with lighter showers for the Cascades, but keep in mind this could change moving forward.

Further south, some moisture from tropical activity in the Eastern Pacific is expected to work its way into the Southwest, resulting in showers and thunderstorms.

Across the East, rain chances will remain high across the Great Lakes as well as the Northeast, with drier conditions prevailing across the Central and Southern Appalachians. 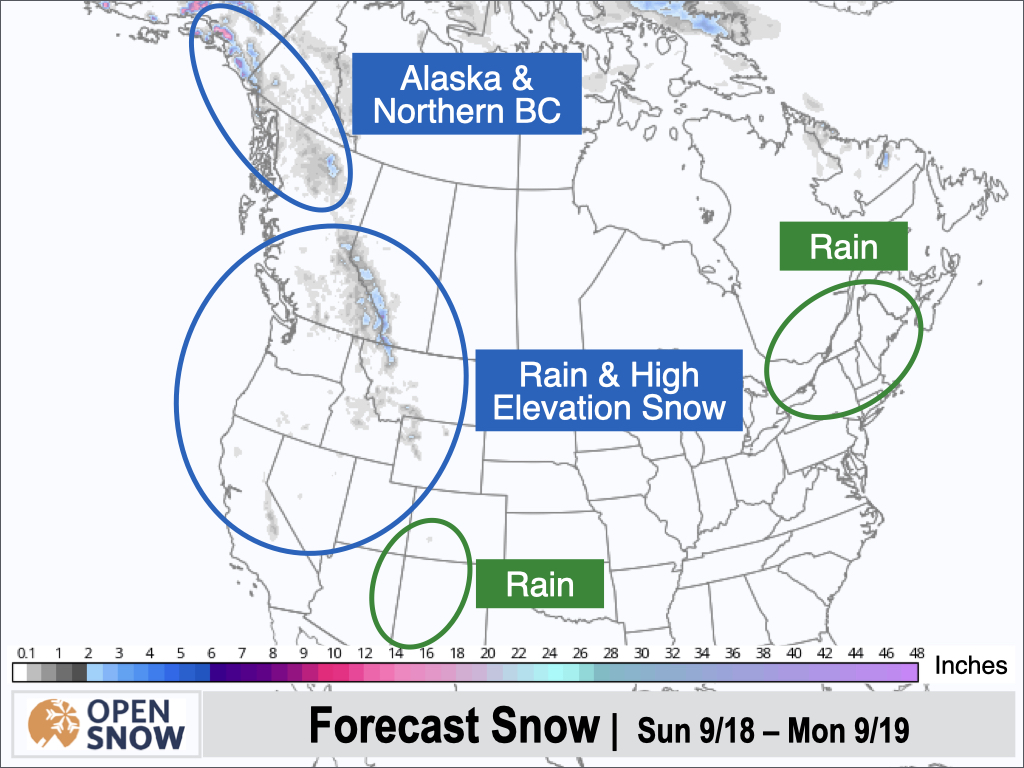 A storm system will linger across the West early in this period with the Central/Northern Rockies being the most favored for high elevation snow along with chilly temperatures. Warmer temperatures will return to the West Coast during this period, while further north, a wet and snowy pattern is expected to develop from Alaska to the Central BC Coast.

Across the East, a ridge of high pressure will build resulting in a warm-up with dry conditions across the Southern Appalachians and higher rain chances across New England. 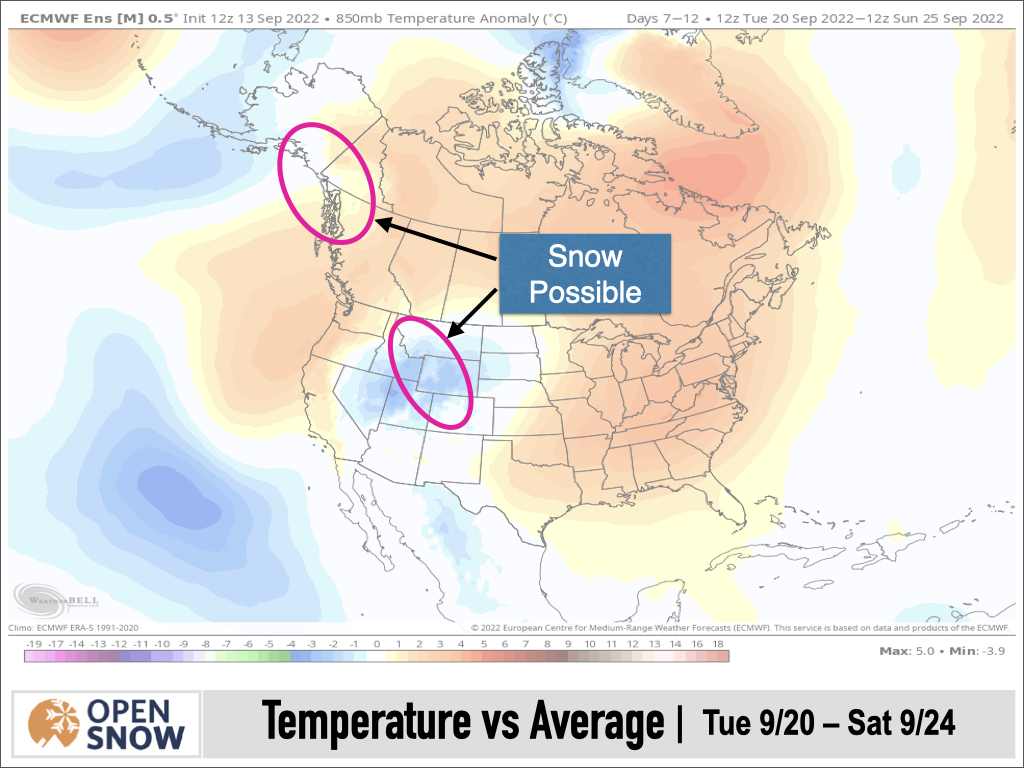 Thanks so much for reading! Next update on Wednesday (9/21).