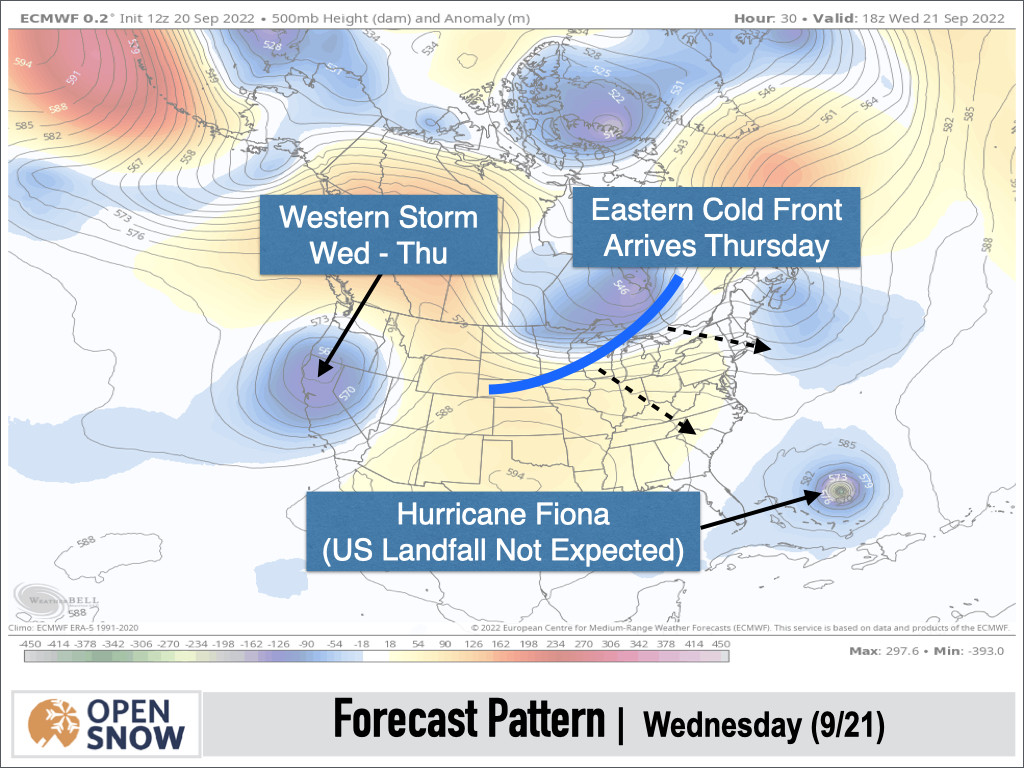 The next couple of days will feature active weather from coast to coast as a series of storms impacts North America. The West has received beneficial moisture recently with heavy rain expected across the Southwest & the Rockies on Wed-Thu along with some high elevation snow. Heavier snow is falling further north in Alaska. The East will also see a strong cold front with rain and fall-like temps.

The main weather features this week include a trough of low pressure over the Western U.S. which is drawing in tropical moisture from the south to produce showers, thunderstorms, and heavy rain across the Southwest, Interior Northwest, and the Rockies.

This system has already impacted Northern & Central California in recent days with significant amounts of Pacific moisture resulting in much-needed rainfall to help with the fire situation, while the tops of the ski resorts around Tahoe were also dusted with snow.

Meanwhile, a strong cold front will push across the Great Lakes on Wednesday before reaching the East on Thursday. Also pictured below is Hurricane Fiona in the Atlantic, which is expected to swing north/northeast over the coming days and stay well offshore of the U.S., though a glancing blow in Nova Scotia couldn't be ruled out. 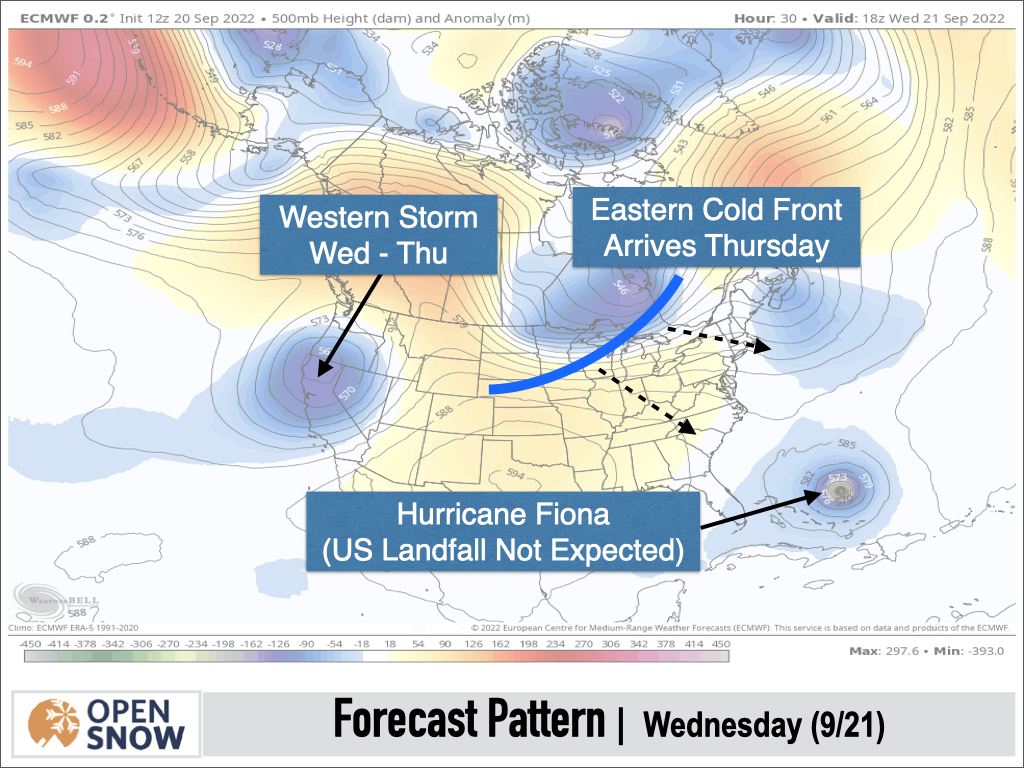 Heavy Rain and Flash Flooding Risk for the West

Tropical moisture streaming northward into the Interior Western U.S. will result in numerous showers and thunderstorms capable of producing heavy rain and localized flash flooding on Wednesday and to a lesser extent on Thursday.

Below is NOAA's Excessive Rainfall (i.e. Flash Flooding) Outlook for Wednesday, which highlights Utah, Colorado, and Arizona as being under the greatest risk. Also, the Northern Rockies could see some heavy rain as well, with recent burn scars in Idaho being most susceptible to flooding. 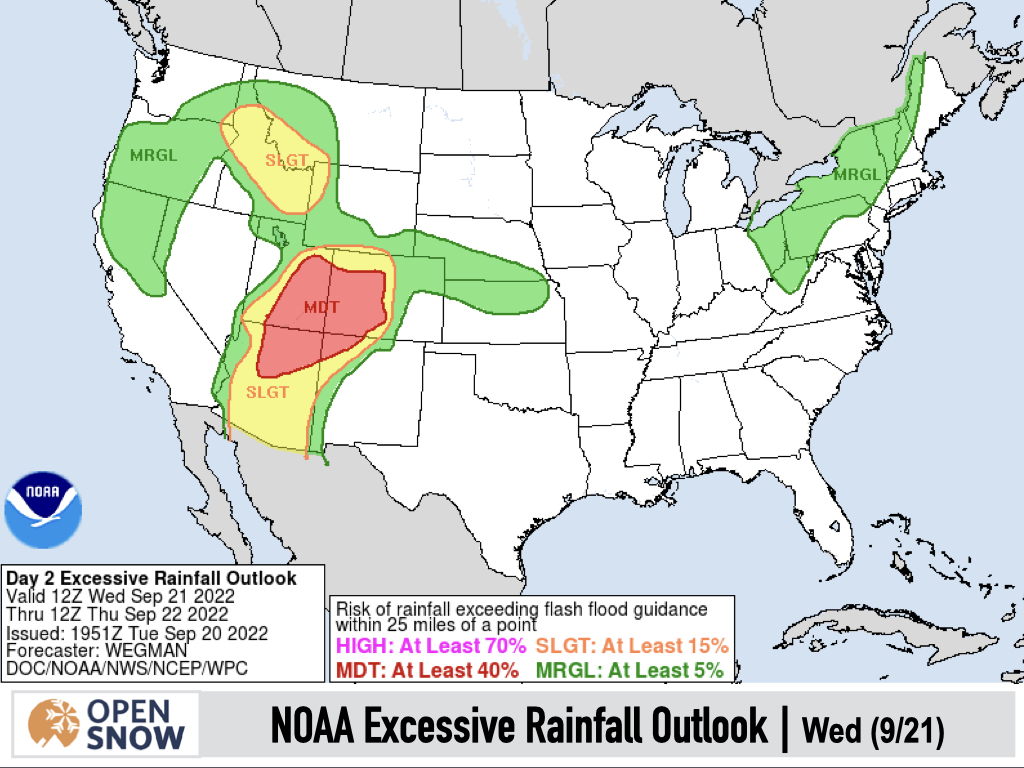 Given the tropical origins of the moisture, snow levels will be quite high across Utah and Colorado, while a cold front arriving on Thursday will result in some wet snow accumulations across the higher elevations of Wyoming and Montana.

While we're mostly talking rain for the Lower 48 and Southern Canada, a very active pattern is setting up across Alaska with new storms slamming into the mountain ranges of Southeast Alaska on a frequent basis over the next 5-10 days.

Snow levels will drop to around 3,000 feet on Thursday and will generally remain in the 3,000-3,500 foot range over the next 5 days. Check out the snow forecast through Monday morning, with deep totals likely above 3,000 feet. 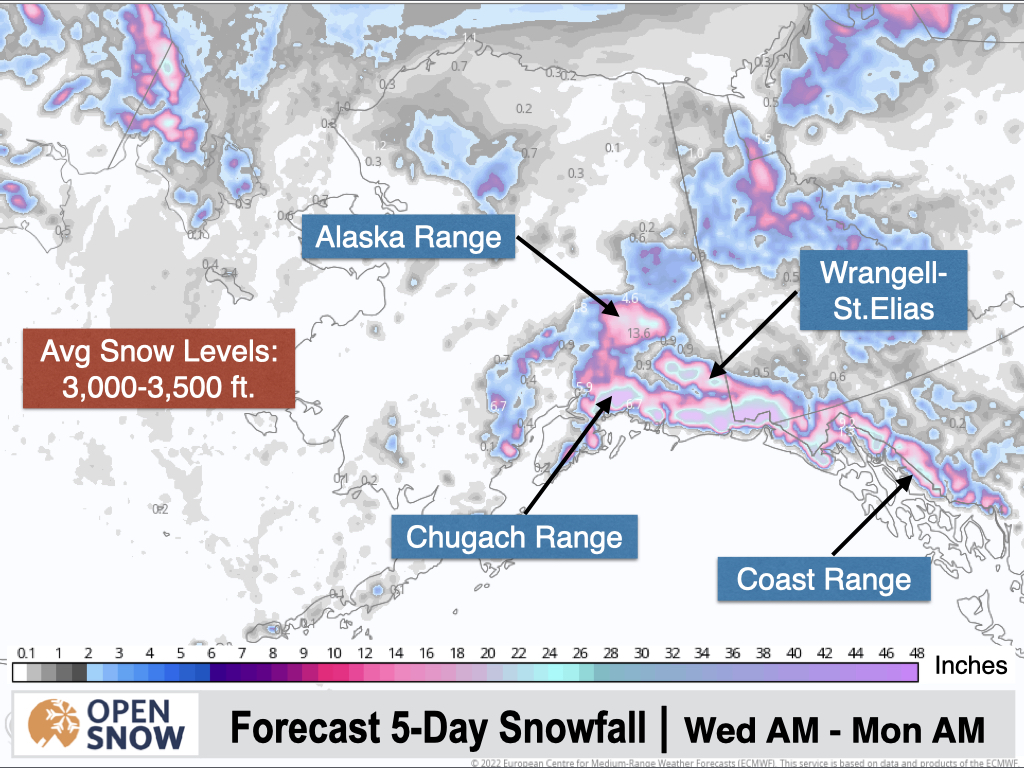 This period will be very active throughout North America with heavy snow in Alaska and heavy rain across the Southwest U.S. along with the Rockies, while Northern California will continue to see some rain showers following heavy precipitation from prior days.

There is also a threat of strong to severe thunderstorms across Northern Utah and Southern Idaho on Wednesday, with straight-line wind gusts of 60 mph posing the main threat along with active cloud-to-ground lightning.

Across the East, active weather is also expected on Wednesday and Thursday with moderate to heavy rain showers and thunderstorms developing in advance of an approaching cold front. Western New York and Pennsylvania could also see some severe thunderstorms on Wednesday, with large hail and damaging winds possible.

On Thursday night, the highest summits of the White Mountains in New Hampshire could potentially be dusted with light snow. 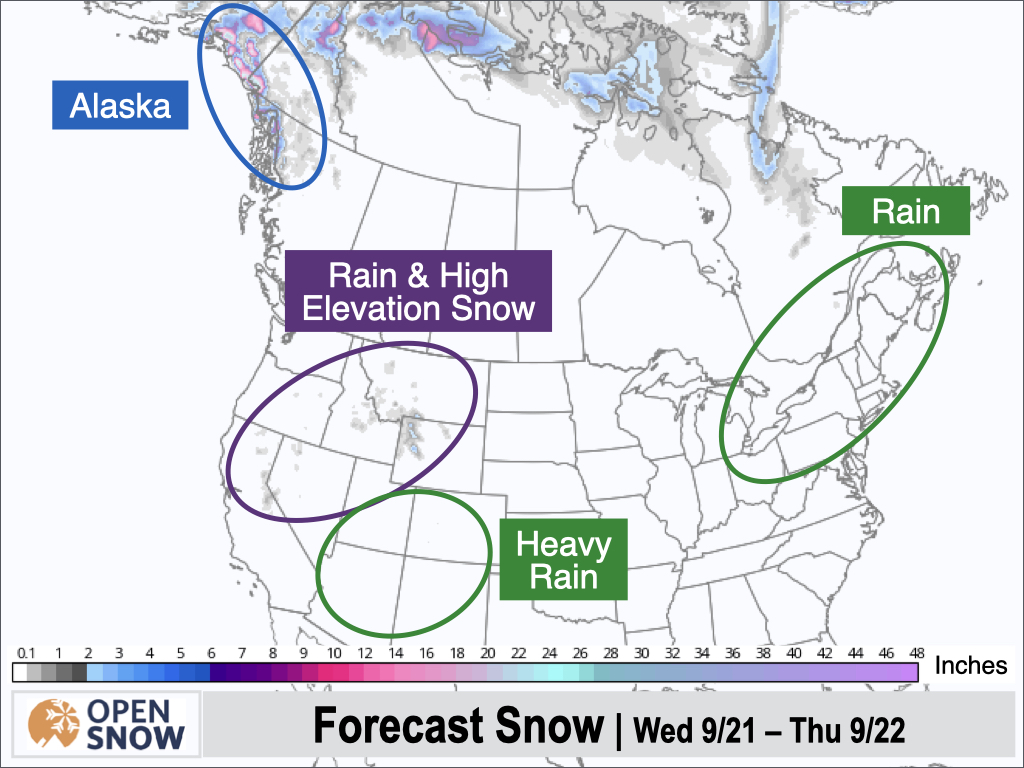 Most of the Lower 48 will head into a quiet pattern during this period with beautiful early fall conditions expected for outdoor activities across both the western and eastern mountain ranges. Minor disturbances could bring some light rain showers to British Columbia as well as the Northern Great Lakes.

Further north, Southeast Alaska will continue to get pounded with heavy mountain snow, while northwest portions of BC will see some snow as well. 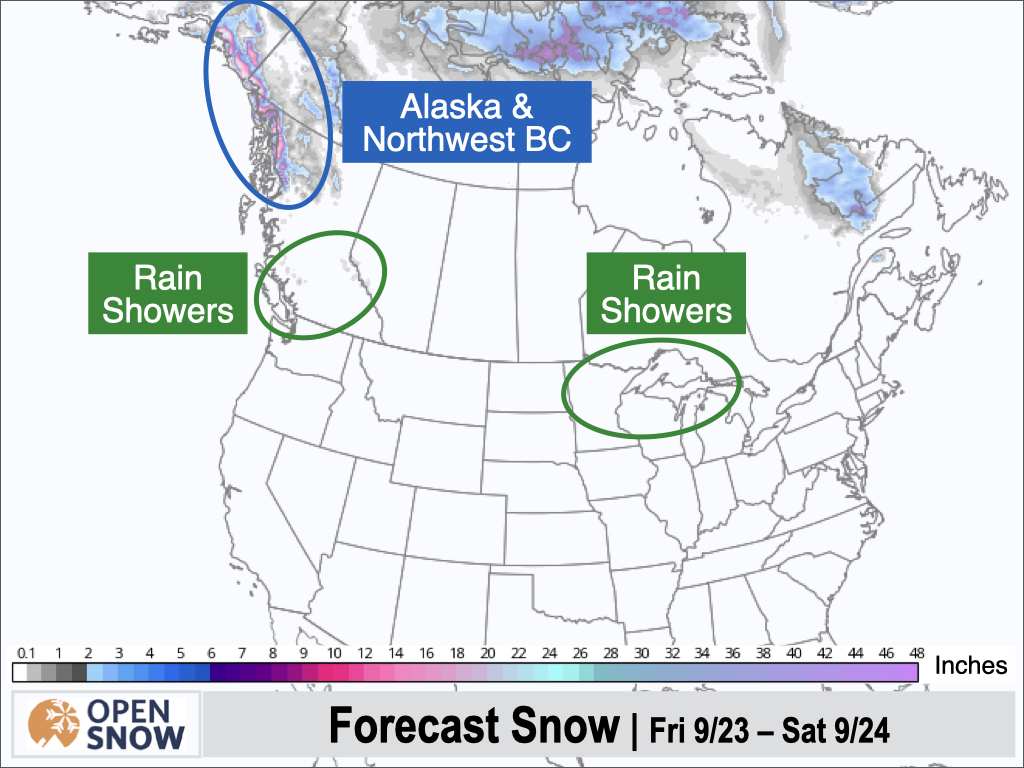 Warm and sunny conditions will continue across the Western U.S. with fall colors likely starting to pop, so it should be a great time to get outside. Meanwhile, the next frontal system will move into the Eastern U.S. during this period with rain expected – heaviest across the Northeast.

Southeast Alaska will continue to see heavy snow above 3,000 feet during this period. 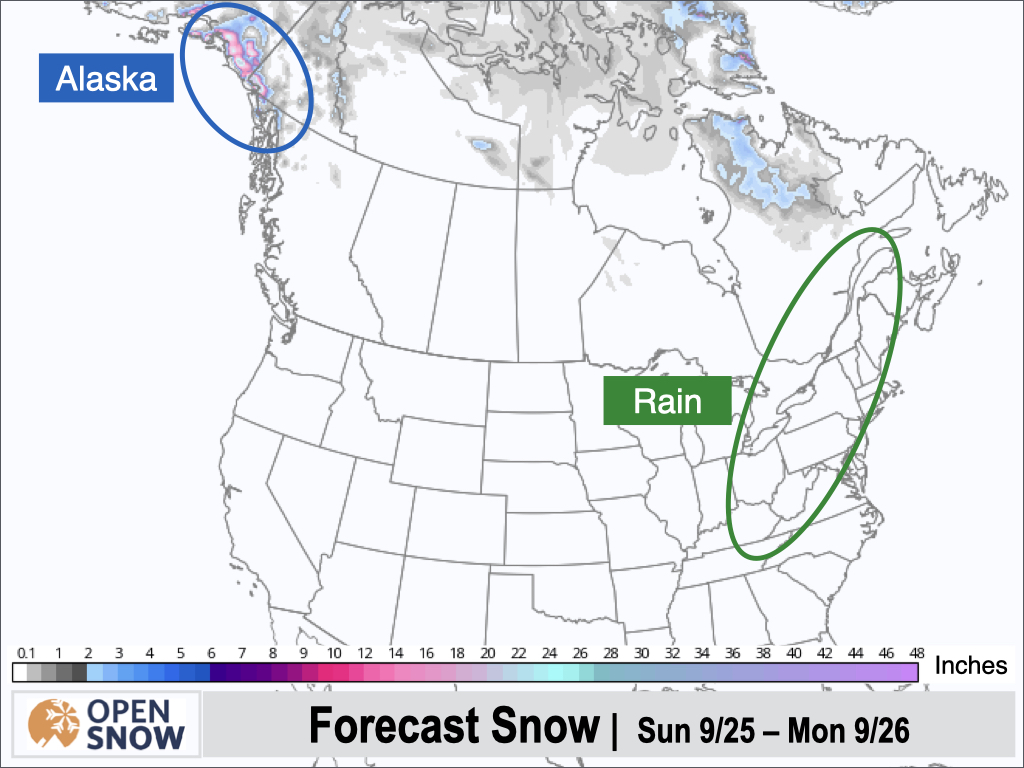 Next week, the dominant pattern will be a ridge of high pressure across the West and a trough of low pressure across the East, while further north, an active storm track will continue to favor heavy mountain snow across Southeast Alaska and Northwest BC.

Above-average temperatures will be favored out West, though weak disturbances could bring light precipitation to some areas from time to time.

Cooler and generally pleasant temperatures can be expected across the East with occasional light rain possible. However, we will have to keep an eye on the tropics across the Atlantic and the Gulf of Mexico, which is always a wildcard at this time of year that can impact the Appalachians. 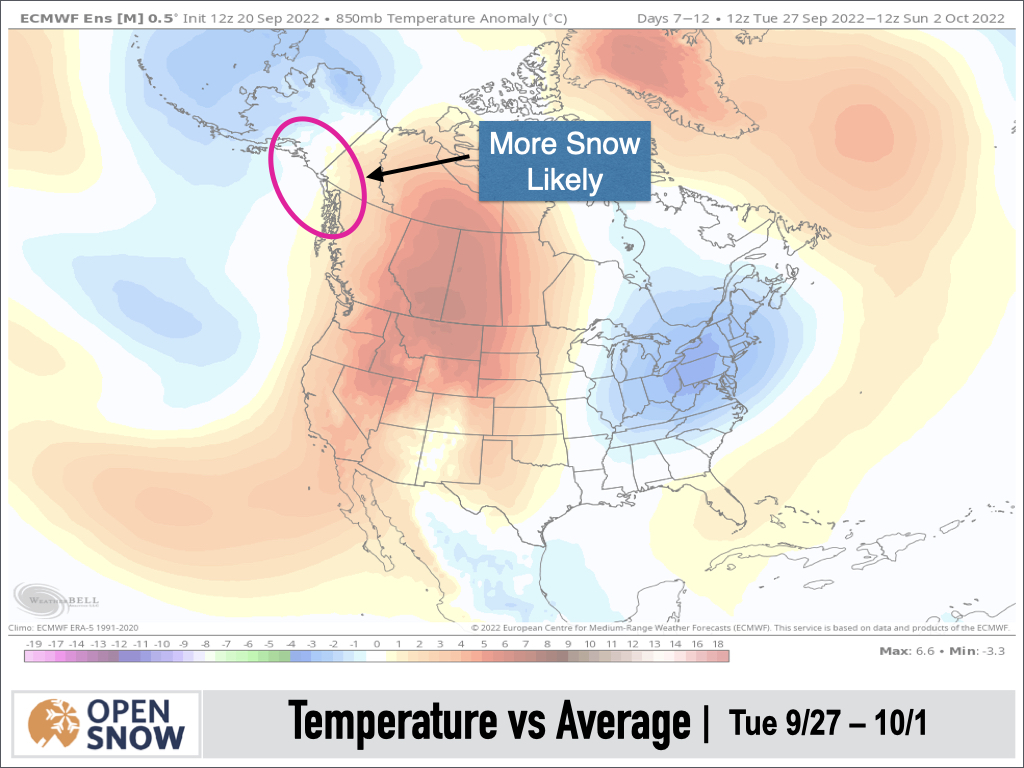 Thanks so much for reading! Next update on Wednesday (9/28).