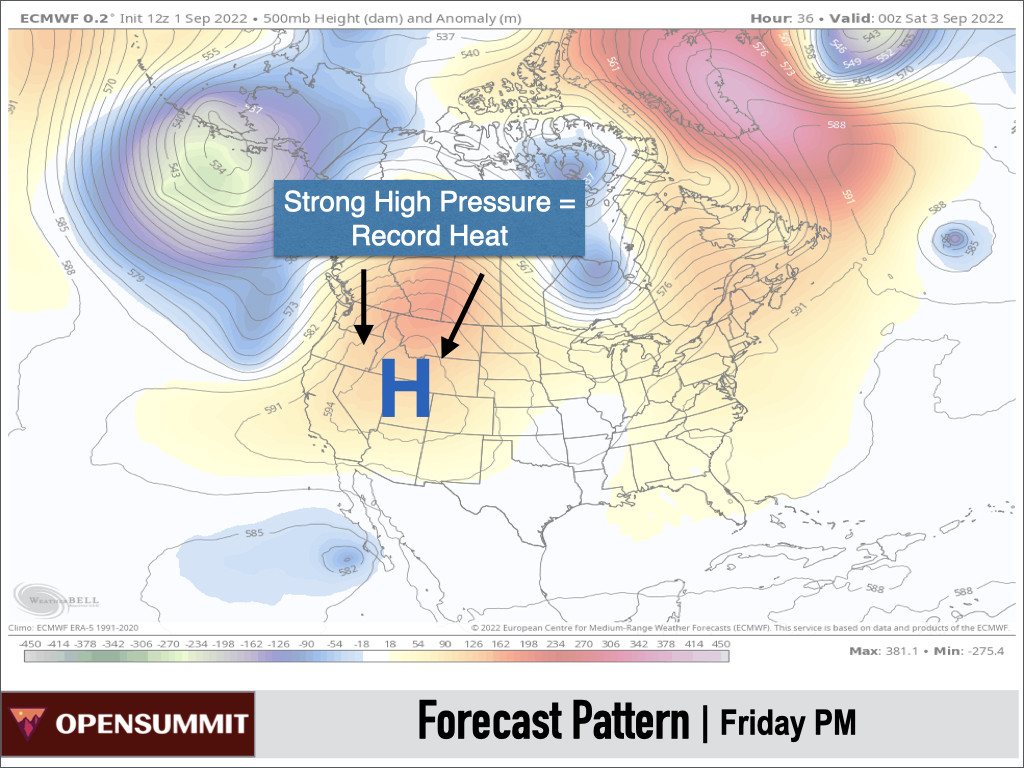 A significant late-season heatwave will persist across the West throughout the holiday weekend before eventually relenting mid to late next week. Daily record highs are likely across much of the West and some areas will break Sept monthly records as well. Smoky conditions have also become more widespread across the Northwest & Northern Rockies. Cooler temps will finally arrive late next week.

This will be the last Western U.S. Daily Summit post of 2022. Starting next Wednesday (9/7), we will transition over to the U.S. & Canada Daily Snow for the fall and winter, where we will start to focus more on mountain snowfall across North America as the seasons change.

However, over the next month or so we will still briefly discuss summer/fall mountain weather (fires, t-storms, etc.) whenever necessary as we go through the seasonal transition.

This could very well be the hottest Labor Day weekend on record for the Western U.S. as a whole with locations throughout the West expected to break daily record highs on at least some of the days this weekend, with September monthly record highs also possible.

The Pacific Northwest (especially near and west of the Cascade Crest) is the one area that will see cooler temperatures arrive with cold fronts on Saturday and Monday. The fronts will make it far enough inland to Eastern WA/OR and Northern ID to result in minor relief as well, compared to recent days at least. 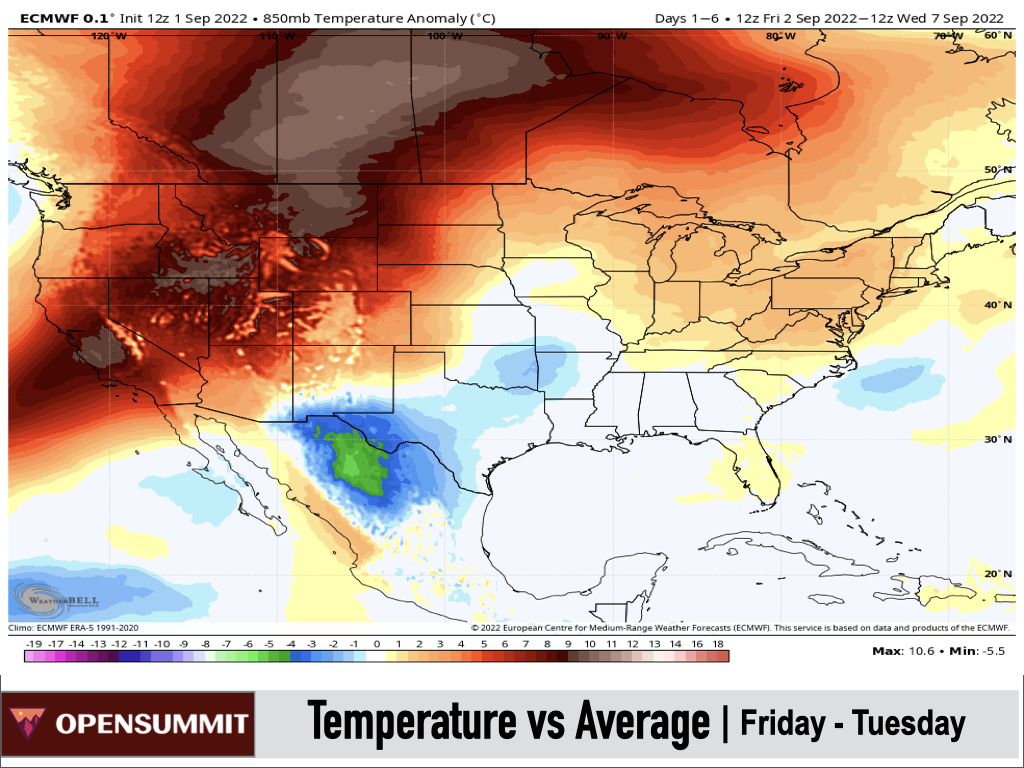 Taking a look at the big picture, we can see the strong ridge of high pressure centered over the Great Basin/Central Rockies that is responsible for the ongoing heatwave. 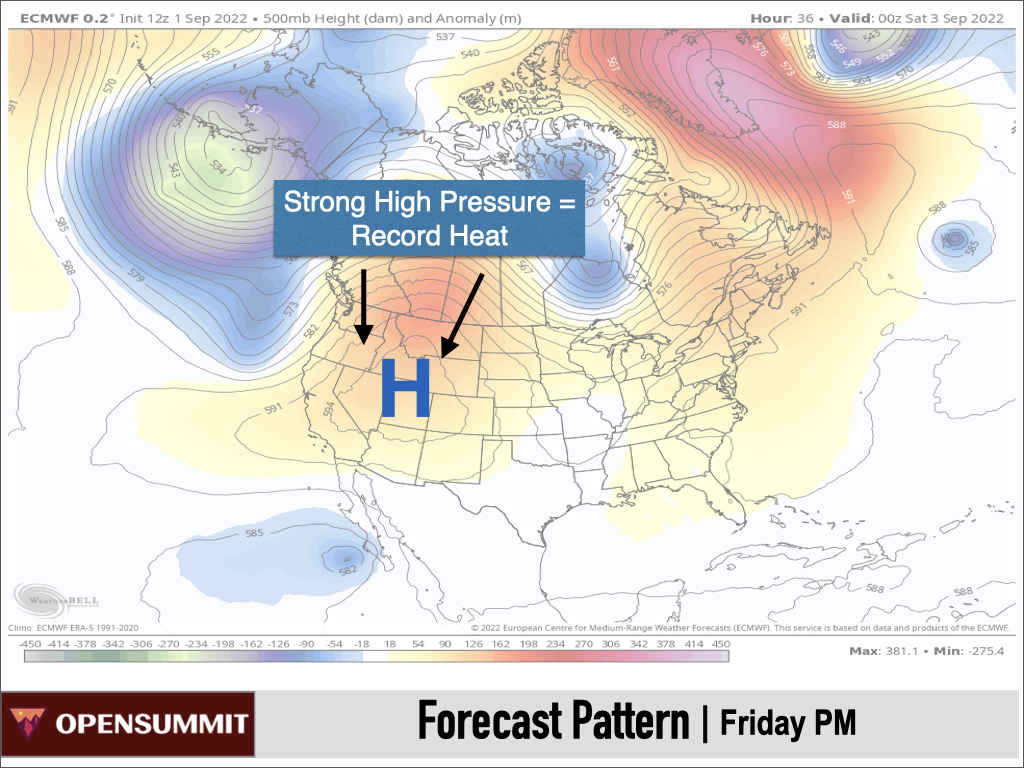 While hot and dry conditions are dominating the pattern across the West as a whole, the monsoon is still alive in a weakened state across the Southwest U.S. On Friday, isolated thunderstorms can be expected across Colorado, New Mexico, and Arizona.

In fact, a disturbance moving into Southern Arizona will contribute to an increase in wind shear and instability, resulting in a threat of isolated severe thunderstorms which could produce wind gusts in excess of 60 mph. However, fast storm motions will limit the threat for heavy rain, though brief downpours will be possible under stronger storms. 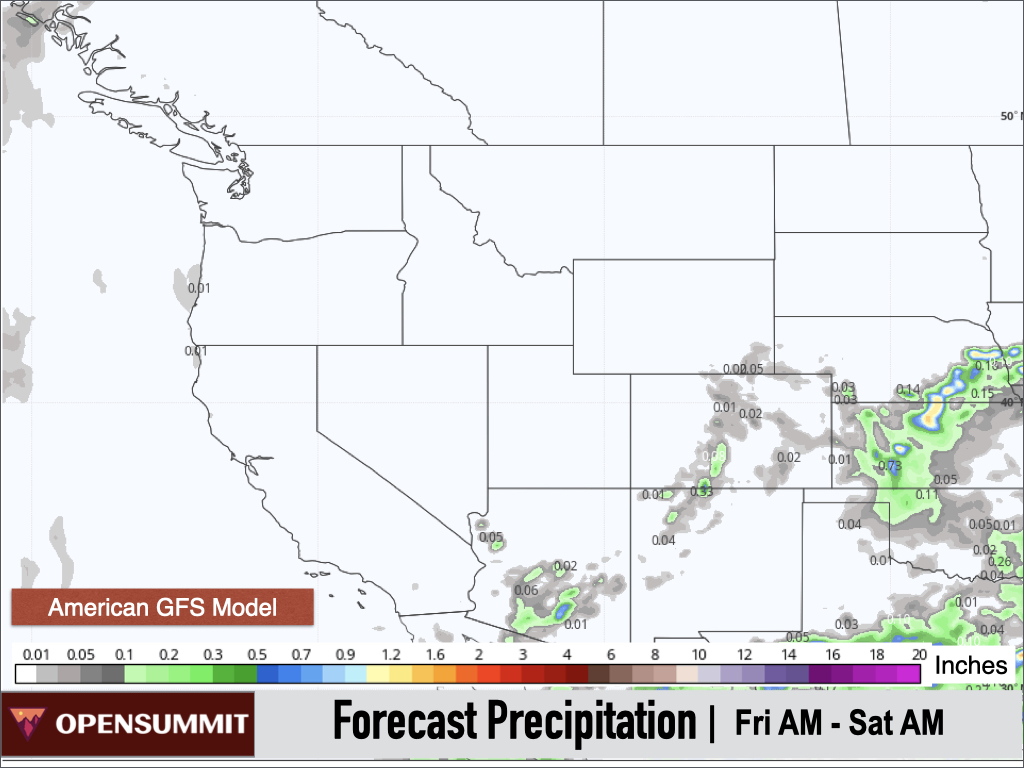 On Saturday, scattered thunderstorms will favor the San Juan and Sangre de Christo Ranges in Southern Colorado and Northern/Central New Mexico, with more isolated activity across Central Colorado. Isolated storms can also be expected across Arizona and Southeast California.

A weak frontal system will also result in some isolated light showers and perhaps a few thunderstorms across the Cascades and Inland Northwest, and possibly as far east as Glacier National Park. 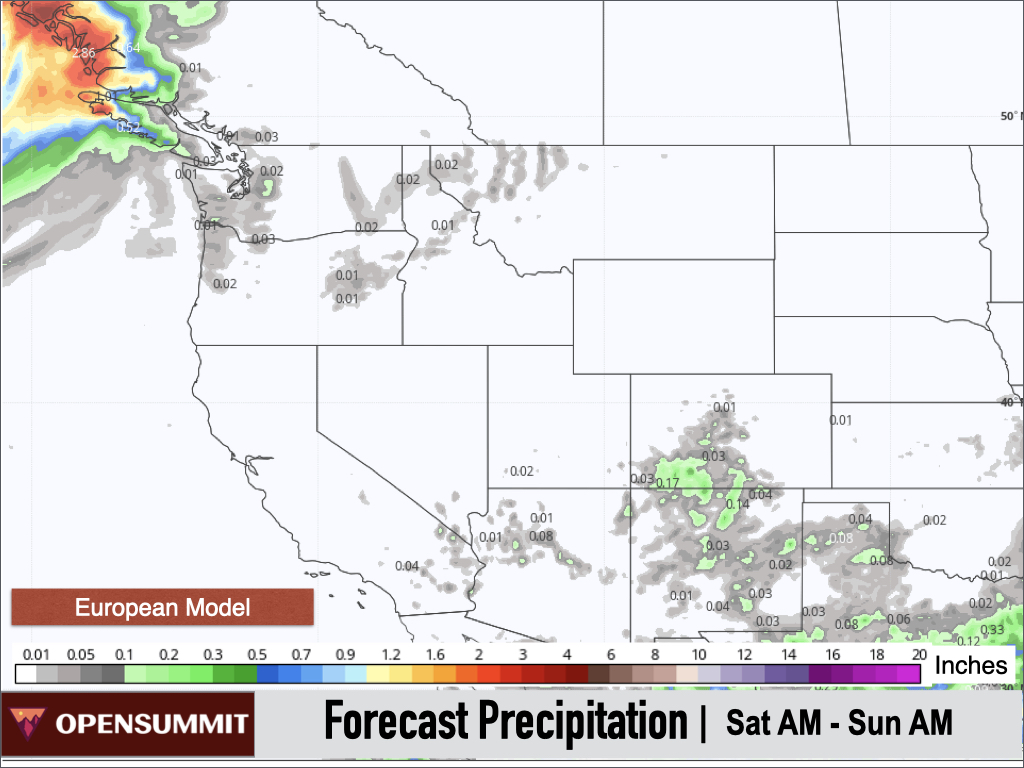 An overall drying trend is expected across Colorado, New Mexico, and Arizona where only a slight chance of isolated dry thunderstorms will exist. Meanwhile, a little bit of monsoonal moisture will sneak northwestward into the Sierra Nevada Range where isolated thunderstorms are possible.

The PNW and Cascades are looking at a dry day on Sunday, followed by isolated light showers on Sunday night as the next disturbance approaches. However, heavy rain with this system will stay north of the Canadian border. 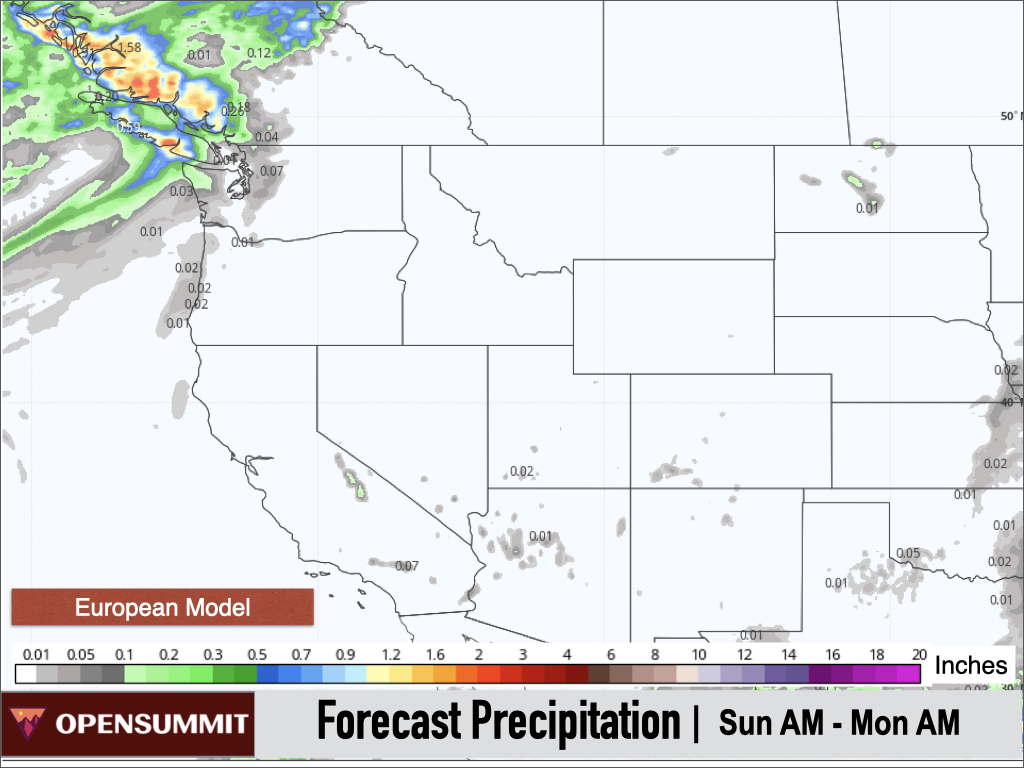 Little change is expected on Monday with just some spotty afternoon thunderstorms at best across the Southwest and Southern Rockies, while the threat of thunderstorms will be a bit higher across the Sierra Nevada Range.

Isolated light showers will remain possible across the Cascades and Olympics on Monday, mainly along and north of I-90 with lower chances across Southern Washington and Oregon. 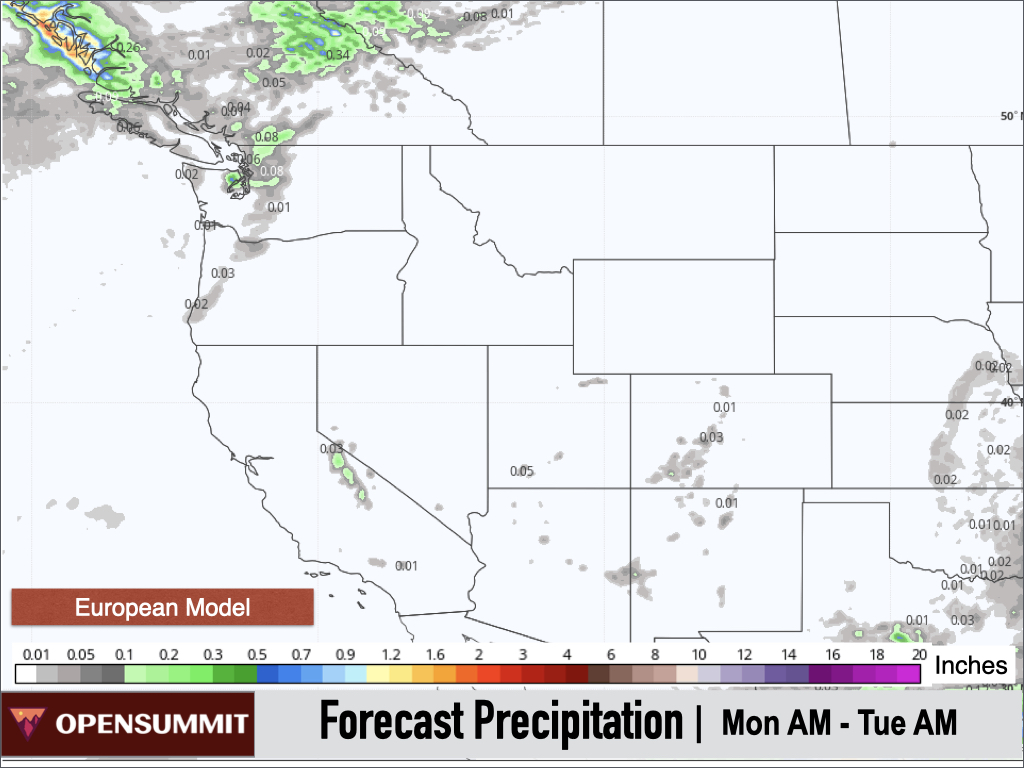 We made it through most of the summer without any significant widespread/heavy smoke occurrences. Unfortunately, this has changed heading into the holiday weekend as the heatwave has taken its toll on the fire situation across the Northwest and Northern Rockies.

Fire activity has really increased across Idaho this week, with heavy smoke expected across much of Idaho as well as Western Montana and Eastern Washington/Oregon through the weekend and into early next week. Locally heavy smoke can also be expected from fires in California and Western Washington. 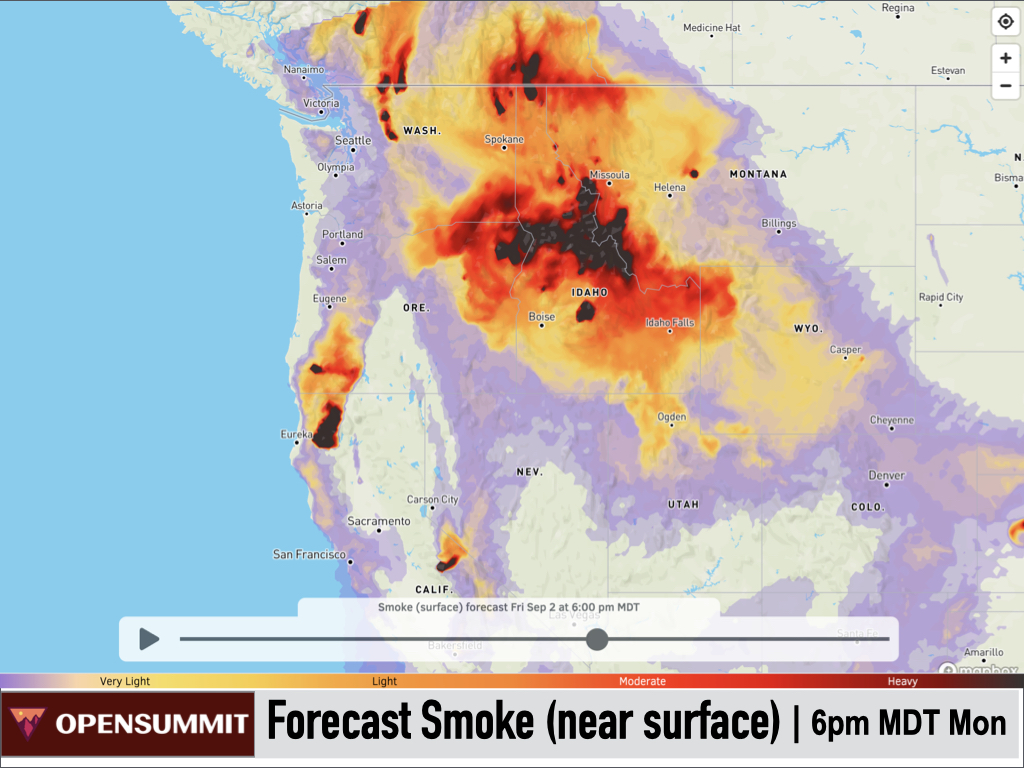 Hot temperatures will continue across much of the West on Tuesday and Wednesday. However, there is a light at the end of the tunnel. A stronger and colder trough of low pressure is projected to move across the West mid to late next week.

A cold front will also arrive with the trough, which will signal an end to the exceptional warmth with temperatures falling to more seasonal levels. The most noticeable impacts from this trough (in terms of cooler temps and shower chances) will be across the Northwest and Northern Rockies, but areas further south will cool off as well.

Also, a tropical disturbance in the Eastern Pacific will work its way northward next week, and moisture from this disturbance will result in a late-season uptick in monsoonal moisture across the Southwest U.S. with an uptick in shower and thunderstorm chances expected. 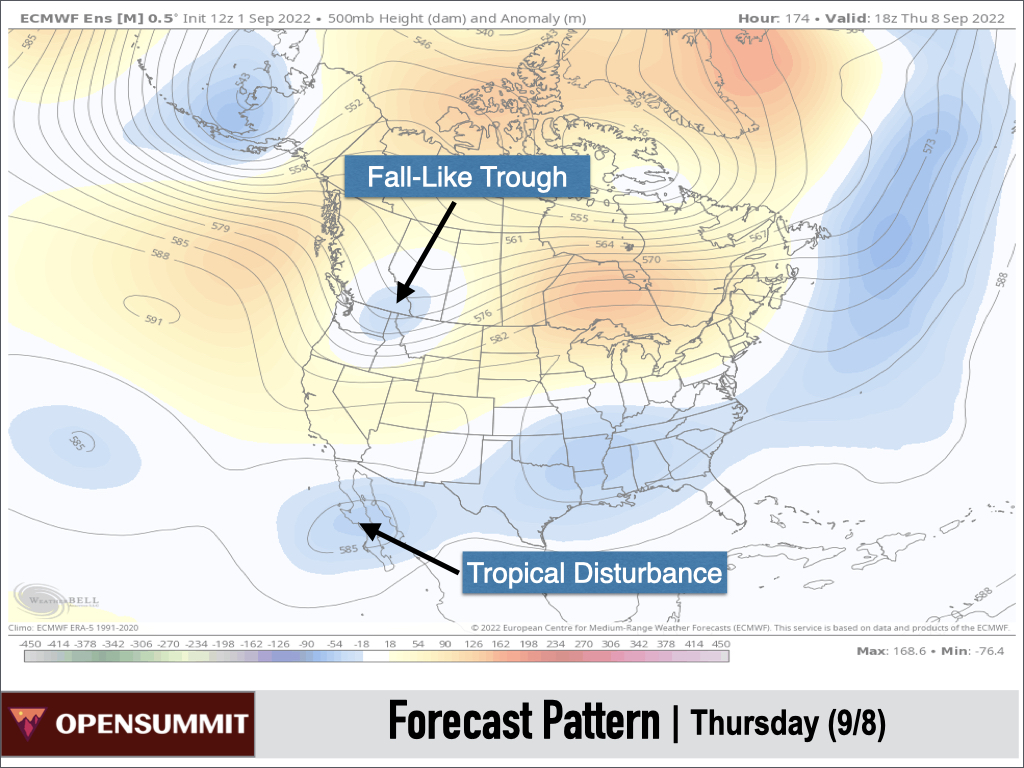 Confidence is low regarding the exact track and timing of the trough next week and the amount of moisture involved. The Northwest and Northern Rockies (Washington to Montana) will see the best chance of showers, with generally light to moderate rain amounts expected at this time.

However, with cooler air arriving, high elevation snow will be a possibility across the higher peaks of Montana (and if you're reading from Canada, the potential for accumulating snow will be higher across the Canadian Rockies).

Further south, Southern Arizona and New Mexico will be favored for monsoon-related showers and thunderstorms, while the Sierra Nevada Range, Utah, and Colorado could see some isolated activity as well. 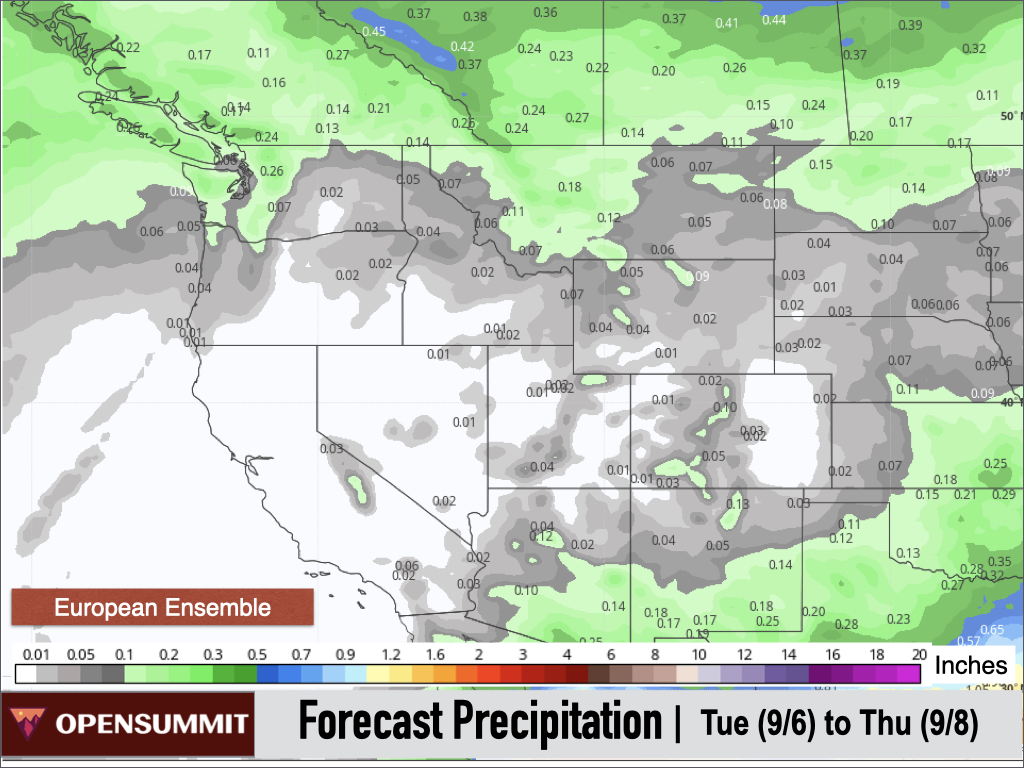 Overall, temperatures will be much cooler during this period compared to Labor Day weekend, even if still a bit above average for early to mid-September. Keep in mind that average temperatures are quickly decreasing at this time of year. 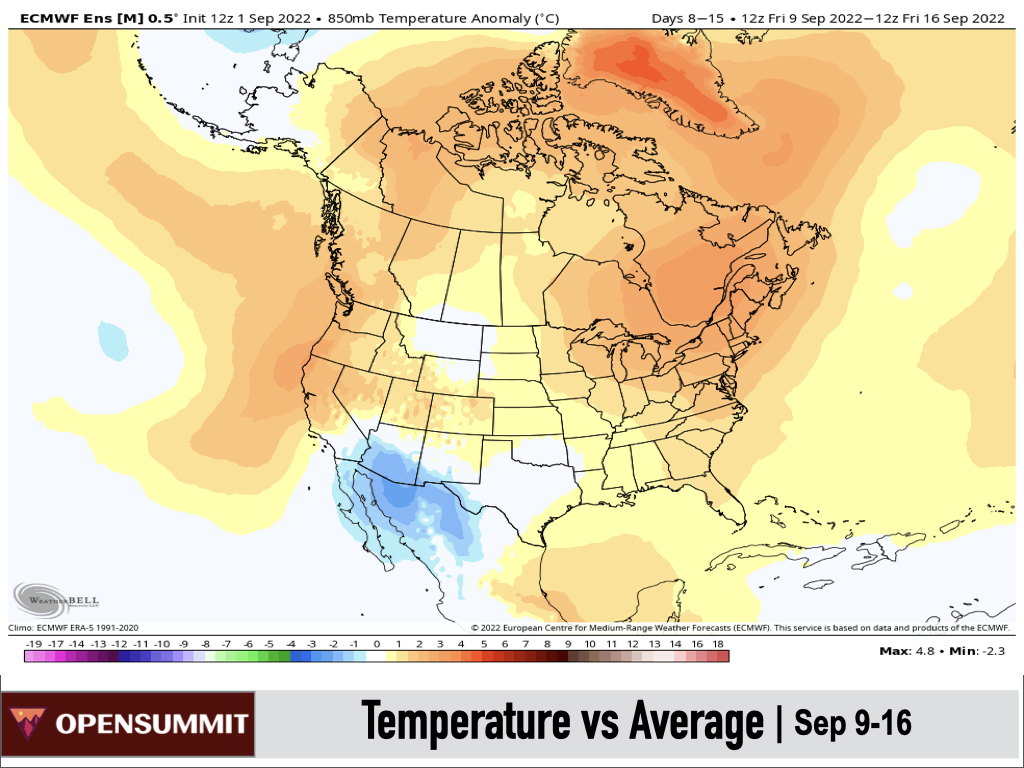 We could see some lingering precipitation chances across the Northern Rockies early in this period, especially near and east of the Continental Divide. Otherwise, the main focus of rainfall looks to shift back to the Southwest U.S. as the monsoon attempts a bit of a late-season comeback (still to a much lesser extent compared to July/August, though). 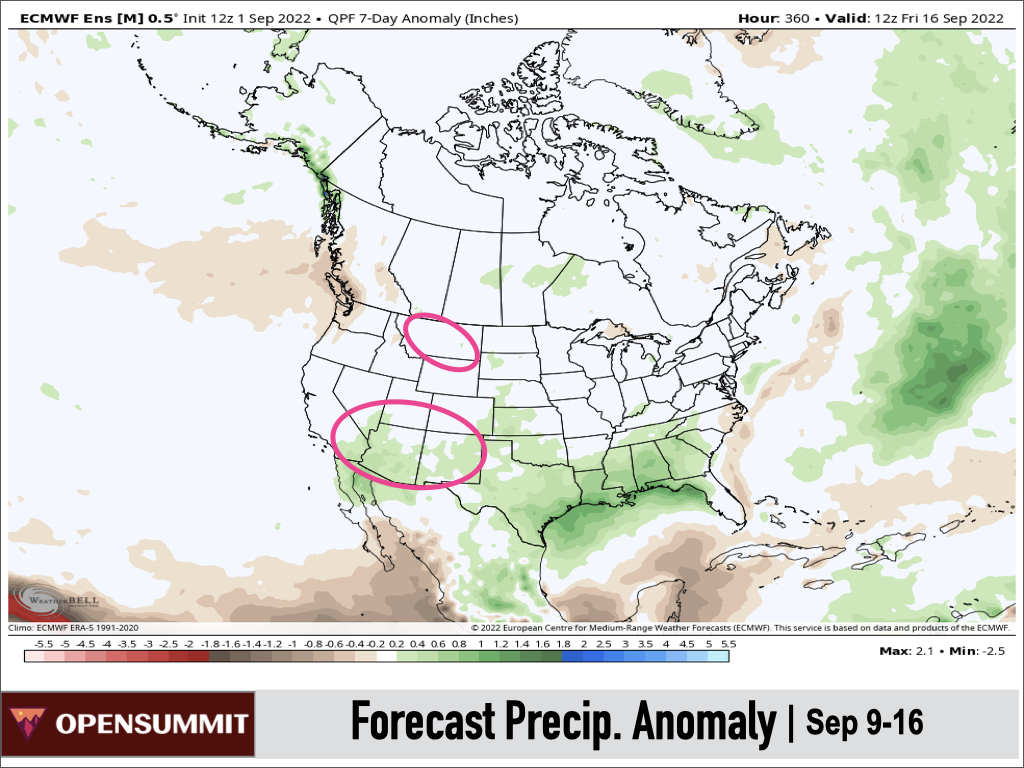 Thanks so much for reading this summer!

Be sure to tune into the U.S. & Canada Daily Snow moving forward, with the next update coming on Wednesday (9/7).

Thinking ahead to winter?

Check out our recent article re: the latest La Nina update and what it could mean for ski season!