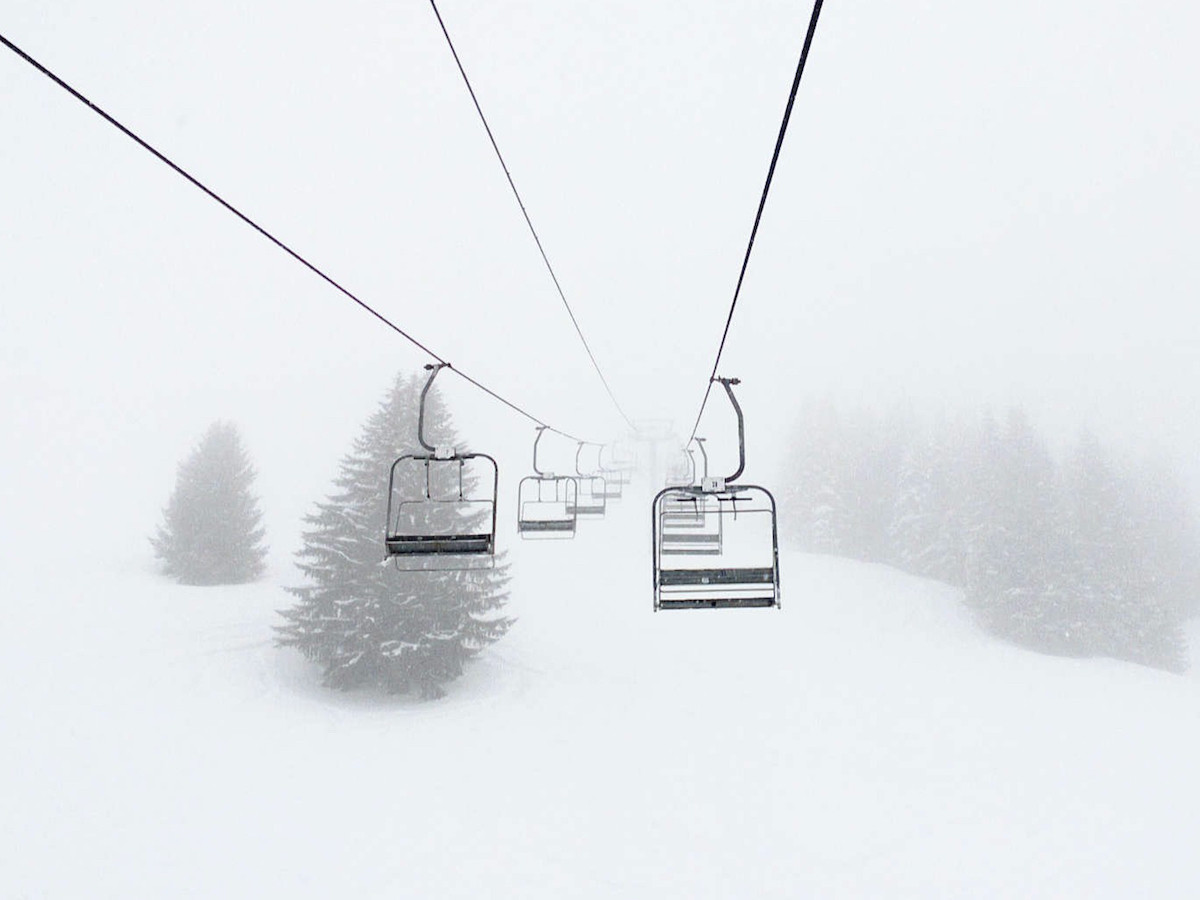 In 2019, we learned how to calculate our carbon footprint and offset this impact.

We are now going a step further to help mitigate the threat of climate change by committing 1% of our All-Access subscription sales to the direct removal of carbon dioxide from the atmosphere and its sequestration in secure, long-term storage.

This is being done in partnership with our subscription payment processer, Stripe. In 2019, Stripe announced its Negative Emissions Commitment, pledging at least $1M per year to pay, at any price, for the direct removal of carbon dioxide from the atmosphere and its sequestration in secure, long-term storage. They’ve since built a small team to focus on creating a market for carbon removal by being an early customer for promising negative emissions technologies.

Below, we'll first run through Stripe's negative emissions criteria and their initial project list. We'll then hope to answer all of your questions in the Climate Change FAQ section.

Stripe has developed a set of project criteria that characterize the kinds of solutions needed to help round out the existing gaps in the negative emissions portfolio. We are excited to support projects that have the potential to achieve these criteria by 2040, even if they don’t yet achieve them today. 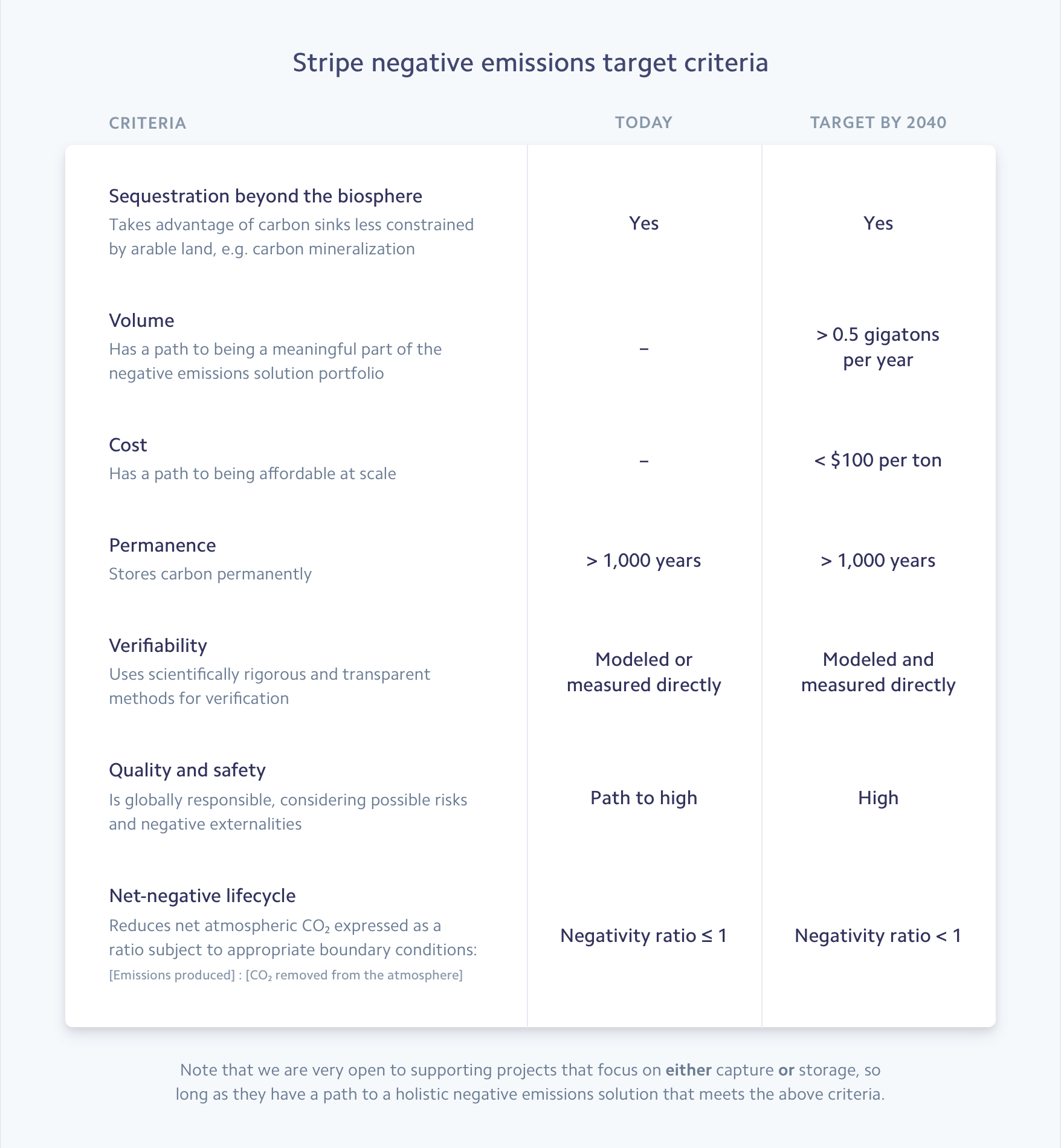 We hope that this approach will accelerate technological developments to remove and store carbon at the required scale, cost, and quality level.

Climeworks uses renewable geothermal energy and waste heat to capture CO2 directly from the air, concentrate it, and permanently sequester it underground in basaltic rock formations with Carbfix. While it’s early in scaling, the capacity of this approach is theoretically nearly limitless. It’s also permanent and straightforward to measure. Climeworks has an ambitious cost and volume curve, with a long-term price target of $100-200 per ton. Though this technology is expensive today, we’re optimistic it will decrease in cost quickly with more early purchasers.

Project Vesta captures CO2 by using an abundant, naturally occurring mineral called olivine. Ocean waves grind down the olivine, increasing its surface area. As the olivine breaks down, it captures atmospheric CO2 from within the ocean and stabilizes it as limestone on the seafloor. This is a compelling approach because it provides permanent sequestration with the potential for very high volume at a low cost. Questions remain about safety and viability: to validate coastal enhanced weathering, more lab experiments, and pilot beach projects must be performed.

CarbonCure’s technology sequesters CO2 in concrete by mineralizing it into calcium carbonate (CaCO3)—as a bonus, this has the side effect of actually strengthening the concrete. This solution is compelling because it’s a permanent, relatively low cost, and could scale to the size of the global concrete market, sequestering >0.5 gigatons of CO2 annually. Today, CarbonCure captures most of its CO2 from industrial emitters such as ethanol, fertilizer, or cement plants. In the future, CarbonCure’s technology could use CO2 from direct air capture technologies once they become more readily available and economical, forming a full negative emissions technology.

Charm Industrial has created a novel process for preparing and injecting bio-oil into geologic storage. Bio-oil is produced from biomass and maintains much of the carbon that was captured naturally by the plants. By injecting it into secure geologic storage, they’re making the carbon storage permanent.

Below, we hope that we've addressed any questions that you can think of. If we haven't covered something that's on your mind, feel free to drop us a note at [email protected].

This is great, but shouldn't OpenSnow be doing more about climate change?

We are expert snow and mountain weather forecasters and not experts in climate science or public policy, so we are continuing to learn and invest. In 2019, we learned how to calculate our carbon footprint and offset this impact. We are now going a step further by committing 1% of our All-Access subscription sales to the direct removal of carbon dioxide from the atmosphere and its sequestration in secure, long-term storage.

I don't believe that climate change is a big deal.

Even though nearly all scientists agree that humans are having a significant impact on our atmosphere and our planet (sources below), let's assume they are wrong and you are right. In this case, there is still no downside to us investing in carbon-removal technologies to help mitigate the risks for future generations.

Why are you getting involved with a politically motivated and sensitive subject like climate change?

Our primary goal is to provide the best snow and mountain weather forecasts, and we also enjoy explaining earth science in a relatable way. Paying attention to the human impacts on our climate is a scientific topic and not one that should be politically motivated or sensitive. Based on current scientific research, it makes sense to us that human-caused carbon emissions are impacting the climate, and we have chosen to directly invest in removing those emissions.

The evidence is becoming increasingly clear that carbon emissions from human activities are having a significant impact on the health and climate of our planet.

Carbon dioxide, methane, and other gases in our atmosphere absorb and radiate heat back toward Earth. Human activities, like burning coal, oil, and natural gas, have increased the amount of carbon dioxide and other greenhouse gases, and these gases are the likely causes for the majority of the warming in BOTH the Earth's atmosphere and the Earth's oceans.

Is the science of climate change "settled"?

Science is never settled because new hypotheses should always be developed and tested. And because science is never 100% settled, we also should not wait for perfect agreement before discussing and implementing alternatives to solve a problem.

How will climate change impact snow and the ski industry?

Climate change's primary threat to snow is warming temperatures, and this will mean less snow (and more rain) at lower elevations, during the shoulder seasons of spring and fall, and likely later starts and earlier ends to the ski resort season.

Below is a quick summary of our understanding of this issue:

Other than warming temperatures, what other impacts are being observed?

Is OpenSnow doing anything else to support the outdoor community?

In addition to committing 1% of our All-Access subscription sales to the direct removal of carbon dioxide from the atmosphere and its sequestration in secure, long-term storage, we are also thinking about how to implement a broader program to support more environmental and scientific research.

Send an email to [email protected] and we'll respond as quickly as possible.