Tuesday will be the last dry day of the week. We’ll see snow showers on Tuesday night, a burst of snow on Wednesday, another burst of snow on Thursday, and showers continue into Friday. The southern mountains should see 10-20 inches with about 4-10 inches in the northern mountains. The weekend will be dry, then multiple storms should hit Colorado during the week of Thanksgiving and into early December.

Wake Up Slope-side In Breckenridge

The Breckenridge lifts are open and with 50+ inches of snow, there’s no better time to plan your ski vacation than early season. Located between mountain and Main Street, Beaver Run offers ski-in, ski-out lodging with ample amenities under one roof. Enjoy rates as low as $136 a night through December including discounts over Thanksgiving! Visit BeaverRun.com to book today.

Skies will be partly to mostly cloudy and temperatures will be warm, starting in the upper-20s in the morning with afternoon highs in the 40s.

A reader sent this photo of mountain biking around treeline in the southern mountains near the town of Rico. There was zero snow on the ground on Sunday, November 17th, but that will quickly change with the upcoming storm! 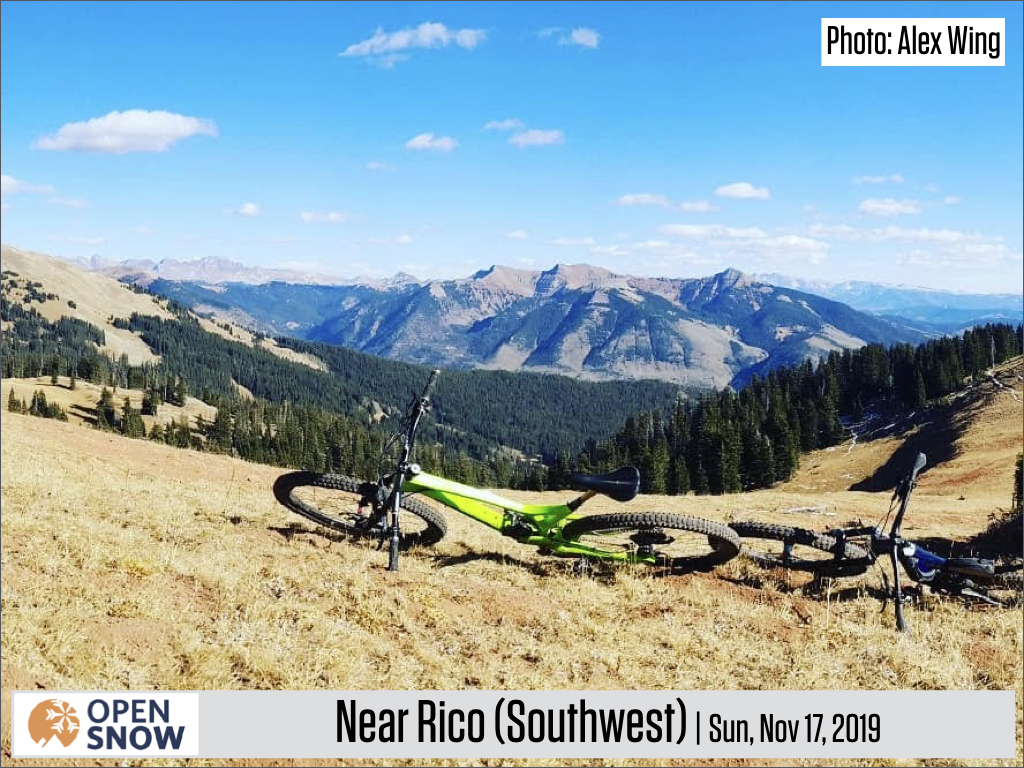 Snow is on the way, thanks to two storms that will semi-combine over the southwestern United States.

The National Weather Service posted a Winter Storm Watch for the southern half of Colorado and a Winter Weather Advisory for the northern half of the state. These colors on a winter map lift are a reason for excitement, especially coming off the dry weather during the first 19 days of November. 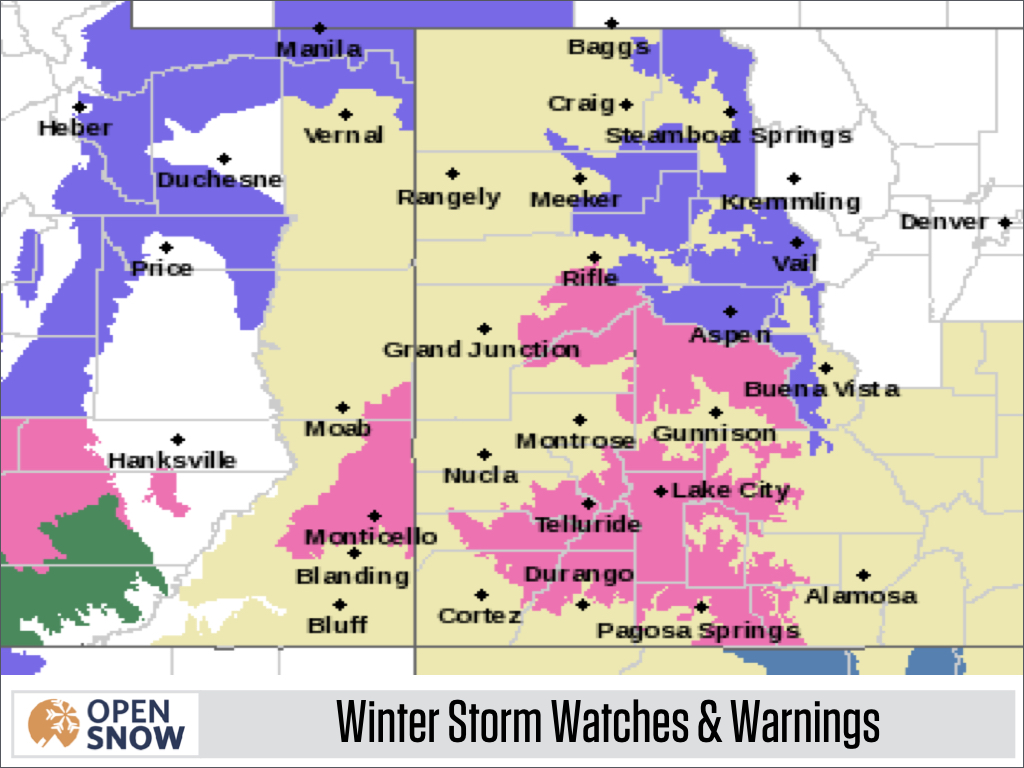 How much snow is coming? The average of multiple models still shows that the most precipitation should hit the southern mountains, and roughly half the amount for the central and northern mountains. The map below displays precipitation, not snowfall. Multiply by about 12 to estimate snow. 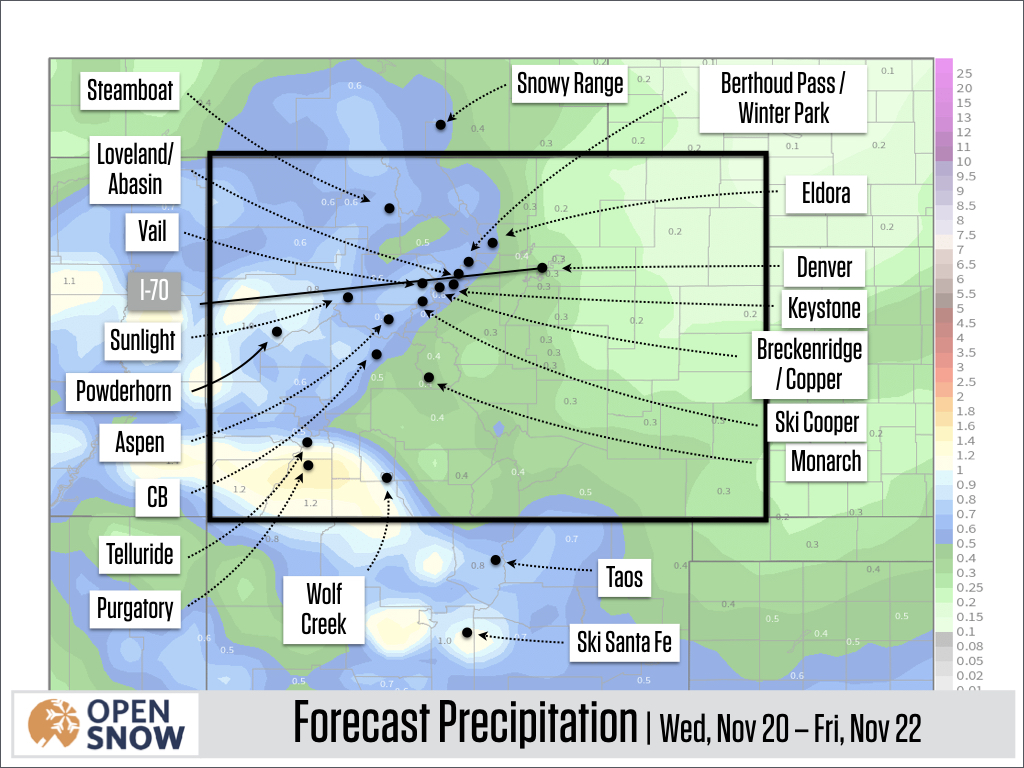 Converting to snow yields 10-20 inches for the southern mountains (Purgatory, Silverton, Wolf Creek) and about half of that, 5-10 inches, for the central and northern mountains.

Below is the rough timing of the storm.

On Tuesday night and Wednesday morning, we’ll see an initial round of showers. Temperatures will be warm with a snow level around 8,000-9,000 feet, which is still snow for most resorts though some rain will fall at a few lower bases.

On Wednesday, a band of intense snow should move across Colorado. The wind direction favors the most snow falling in the southern mountains, but because of the random nature of stronger cells within this band, any mountain could see a quick burst of 2-5 inches in a few hours.

On Thursday, another band of intense snow should move across Colorado. Again, the southern mountains will be favored, with random, stronger cells hitting other mountains. The snow level will fall to or below most mountain bases.

From Thursday night through Friday, snow showers will continue with a few inches of additional accumulation and a possibility that some area over the central or northern mountains might see 3-6 inches during this time. Temperatures will be colder, so the snow quality will be lighter and fluffier.

If you’re looking to enjoy the new snow at a resort, both Thursday and Friday should offer new snow at open areas, and Friday is the wildcard as the morning that could be pretty fun if an area of more intense snow materializes on Thursday night.

Also, a few mountains will be opening or re-opening on Saturday:

One last thing about this storm. I like to look for areas where the models agree about snow totals because that increases our confidence in the forecast. One area is Wolf Creek, where both the Canadian model and the CAIC WRF 2km model show about 20 inches of total snowfall. 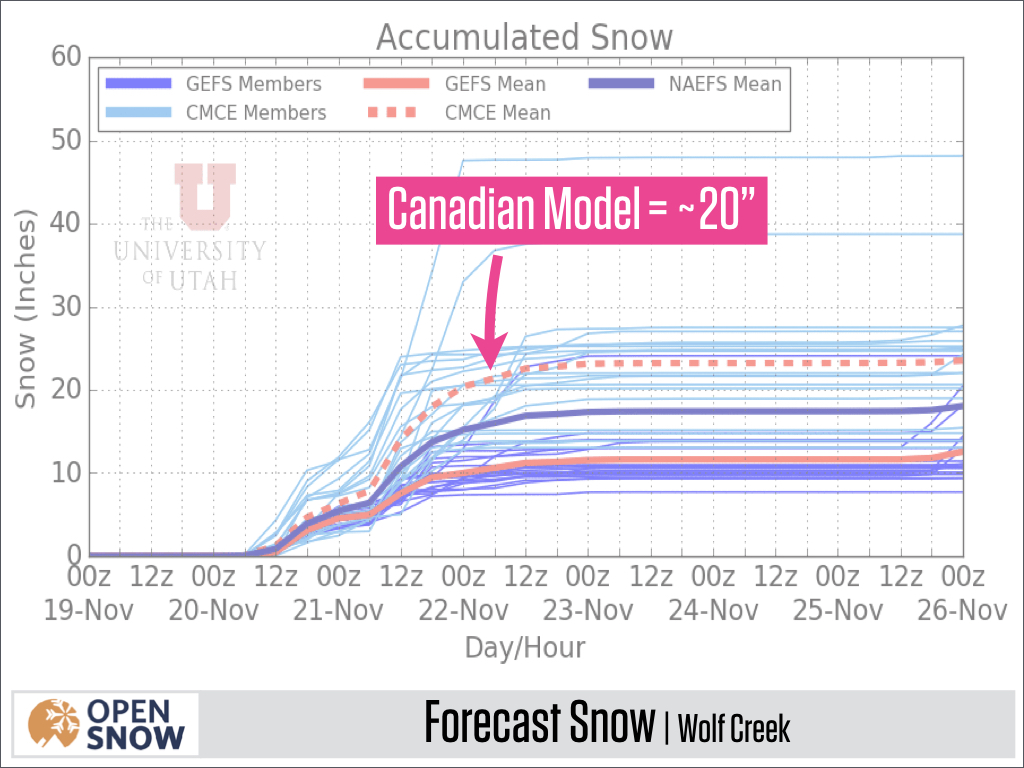 Just like yesterday's forecasts, I looked at all of the longer-range forecasts and I have nothing but good news to report.

All models show a chance for at least two storms during the week of Thanksgiving with storm chances continuing into early December. 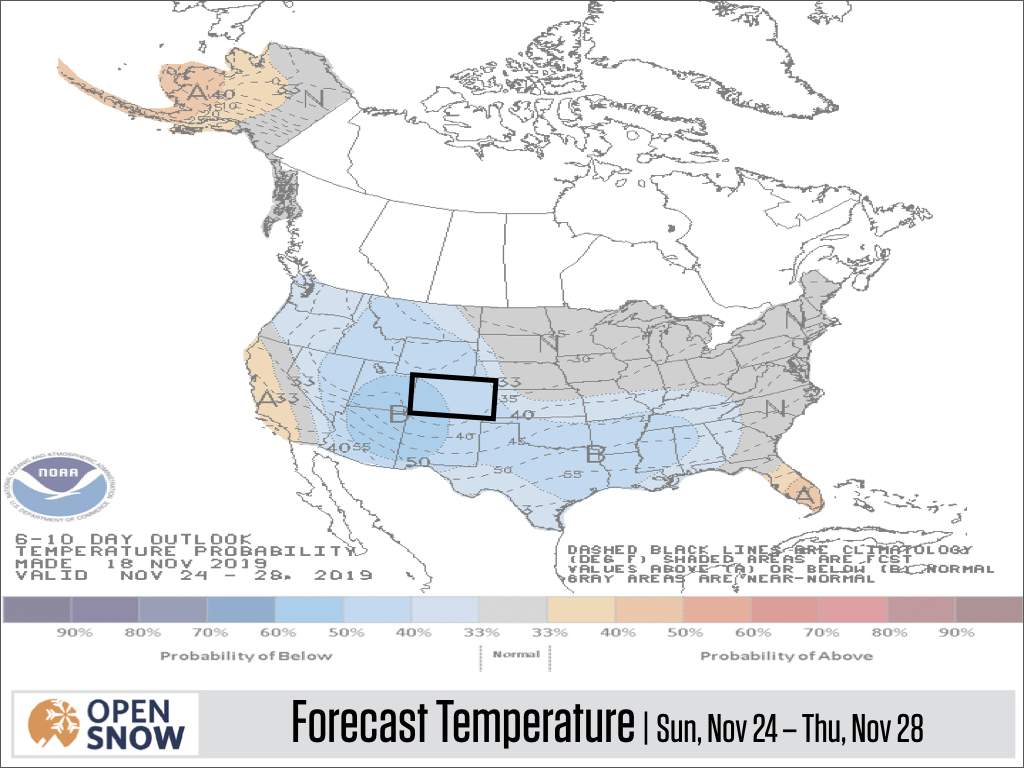 When I find more agreement among the models, I’ll start talking about the timing and track of each system. For now, I am happy to see lots of possible action over the next two weeks and I’ll leave it at that.

PS – I hope to see some of you at one of my upcoming talks listed below!

- November 23rd at the Breckenridge Riverwalk Center
- The biggest fundraiser of the year for CAIC
- LOTS of prizes, awesome live music, silent and live auctions, dinner, and drinks
- Win skis, splitboards, packs, and more
- Get your ticket today!