On Monday night, a weak storm brought a few flakes to the northern mountains with accumulations between a dusting and an inch. The next chance for snow will be on Thursday when a stronger storm brings flakes to all mountains and the deepest powder should be 5-10 inches in the southern mountains. Then a multi-day system could deliver snow to all mountains from Sunday through Tuesday with the best powder possibly being Monday or Tuesday.

Before looking ahead, here is one more reader-submitted photo from the powder that fell in the southern mountains around Thanksgiving. Wolf Creek reported a storm total of just over two feet. 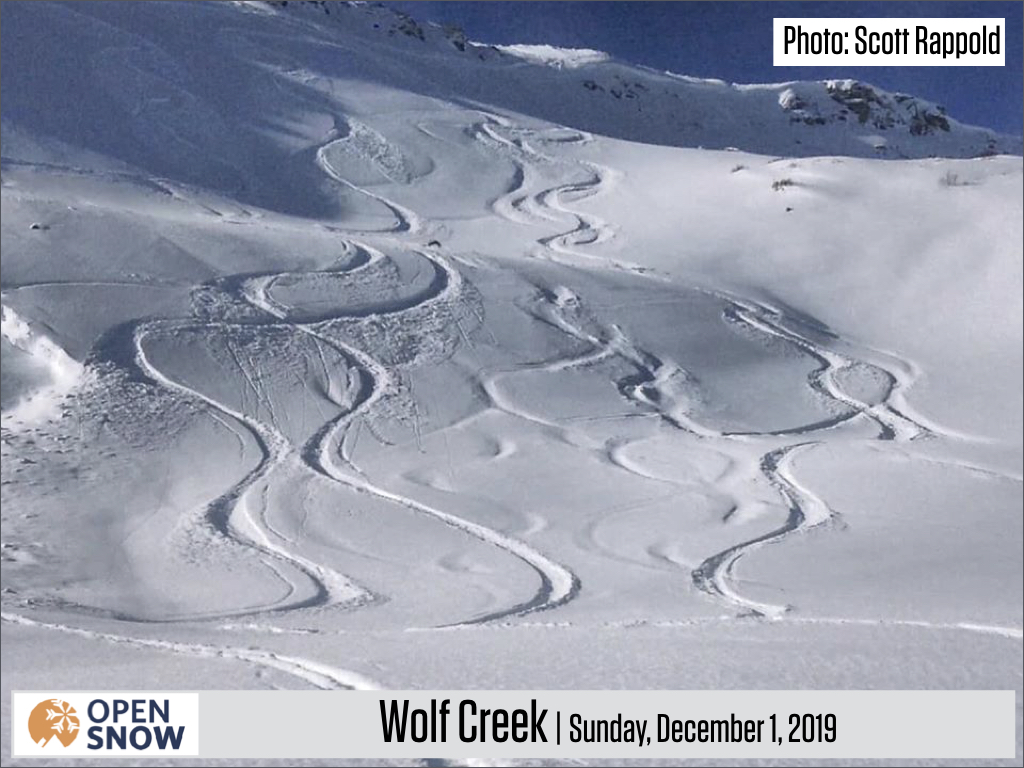 On Monday morning, 24-hours before this storm, all models showed 1-3 inches of snow, and then abruptly, on Monday night, all models backed off to show just a dusting to an inch.

Yesterday I talked about snow coming from Wednesday night through Thursday, favoring the southern mountains with 5-10 inches and likely 2-6 inches for the central and northern mountains.

I do not see much reason to change the forecast and it still looks like Thursday should be the best day of the week in terms of finding fresh snow.

While this storm is weak, it will bring a lot of moisture and it is this high moisture content that should allow us to see respectable snow totals.

Getting into the details, there is some uncertainty in the forecast, especially in the northern mountains which could get skunked with no snow or see moderate totals of 2-6 inches.

The Canadian model shows most of the snow in the southern mountains, and the American GFS model (not shown) basically agrees with the Canadian forecast. 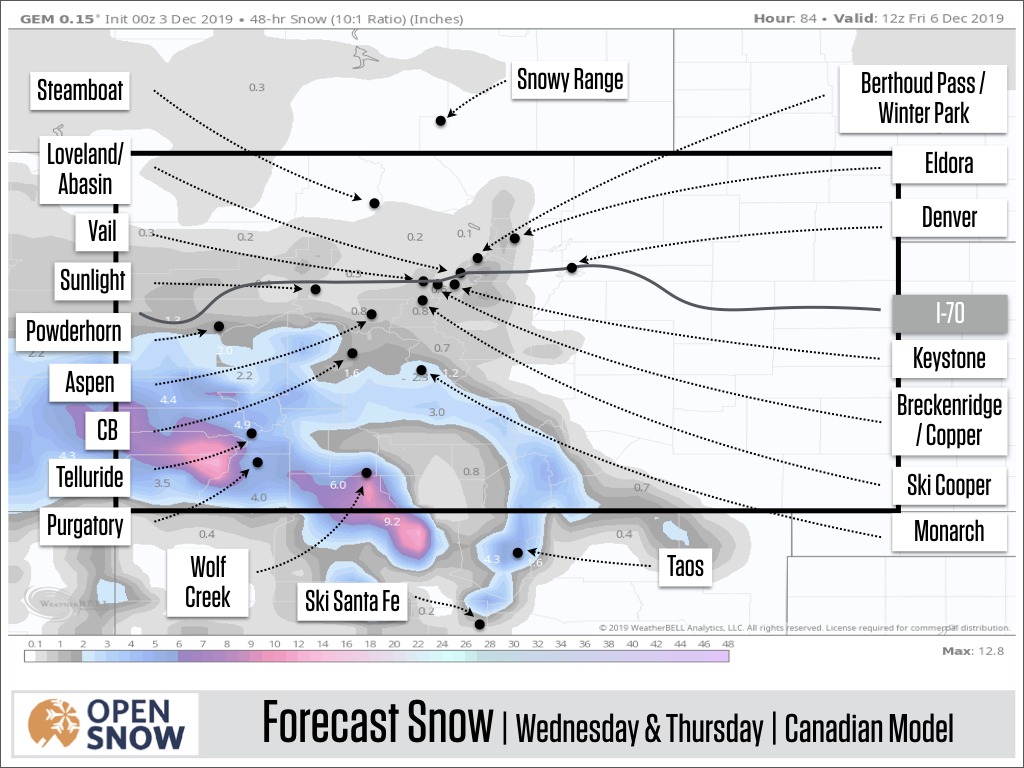 The German ICON model, on the other hand, shows more snow spreading into the northern mountains, and the European model (not show) basically agrees with the German forecast. 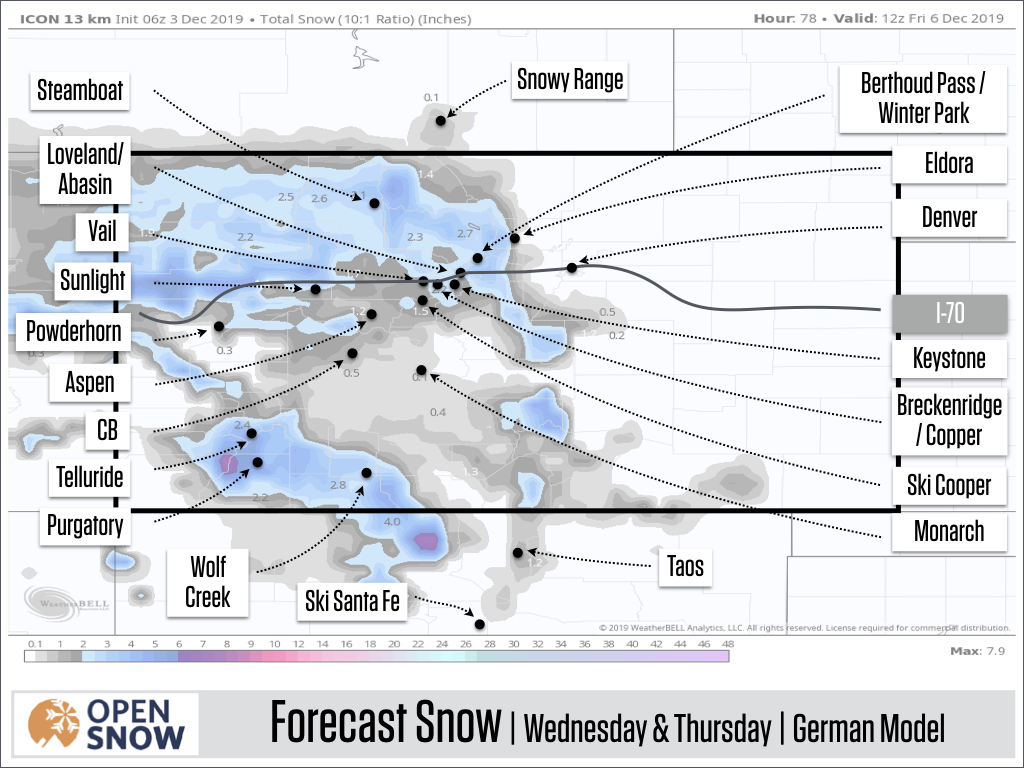 In times of uncertainty (which describes almost any forecast!), it is best to average multiple forecasts. The average of many versions of the SREF model show about what we’d expect – more snow in the south, and some snow in the central and northern mountains. 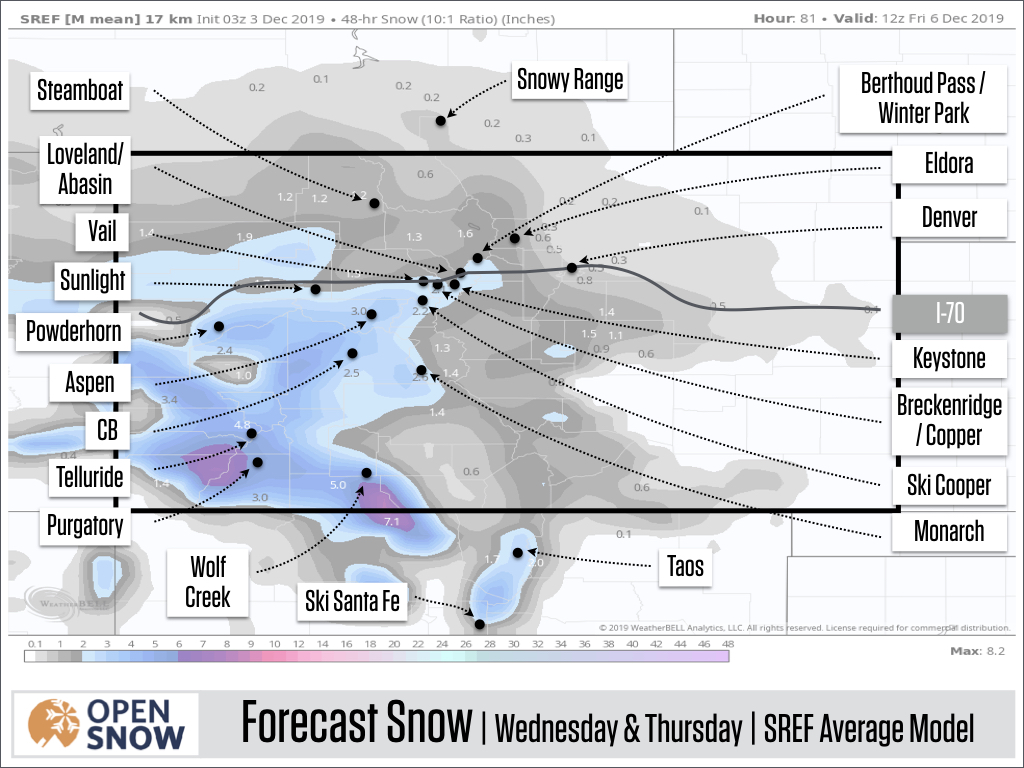 And the National Weather Service forecast mostly mirrors the average SREF at a higher-resolution, with more snow in the south and less (but not zero) snow in the central and northern mountains. 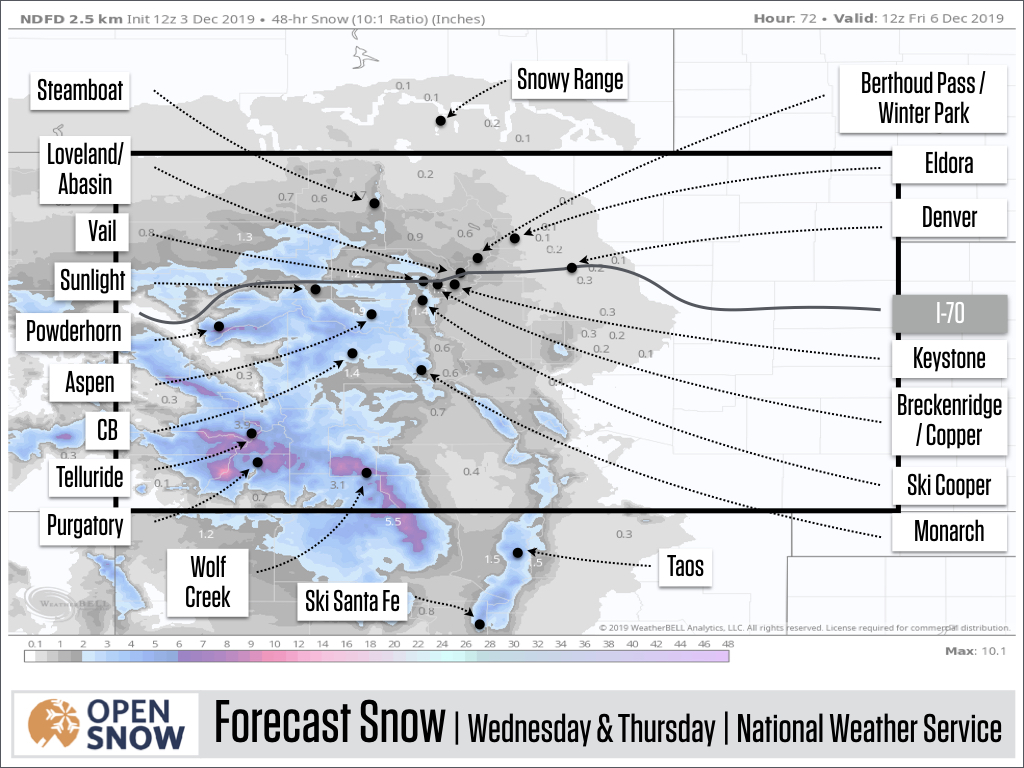 The take away is that Thursday will be our best chance for powder this week, the southern mountains are still favored with 5-10 inches, and the central and northern mountains have the greatest uncertainty with anywhere from a coating to 6 inches.

In yesterday’s forecast, I was concerned that this storm system could split with energy going north and south of Colorado.

Today, the forecasts are trending toward a more favorable scenario for powder and keeping the storm a bit more intact. The latest forecasts also show that energy and moisture might linger through Monday, which could make Monday softer and deeper and extend the powder possibilities into Tuesday.

If the Sunday + Monday storm extends into Tuesday, then we may only see one solid day of dry weather next Wednesday before another storm moves toward Colorado late in the week and over the weekend.

Some models continue to show a stormy period between about Thursday, December 12 and Monday, December 16. But other models push this storminess just east of Colorado leaving us with little snow. There is powder potential during these days but it’s far too early to get excited, and we’ll likely need to wait another 3-5 days before we have somewhat higher confidence in the storm track.

PS – I have two more talks on my schedule and I hope to see some of you at one of them (listed below)!