Wednesday will be mostly dry and then all mountains will see snow from Wednesday night through Thursday with an average of 2-6+ inches and soft snow to enjoy through the day. The next storm should bring snow from Sunday through Monday and totals could be in the 4-8+ inch range with the softest snow on Monday morning. After that, there is a chance for another storm sometime around December 12-16 and a better chance for a more favorable pattern as we transition into the final 10 days of December.

The Wednesday morning radar animation shows a lot of precipitation to the southwest of Colorado.

The main ingredient that this storm has going for it is lots of moisture. The storm’s energy is weak, and the forecasts for snow are still rather uncertain, but with a lot of moisture in the air, there is a chance for moderate snow totals and there could be an upside surprise as well. 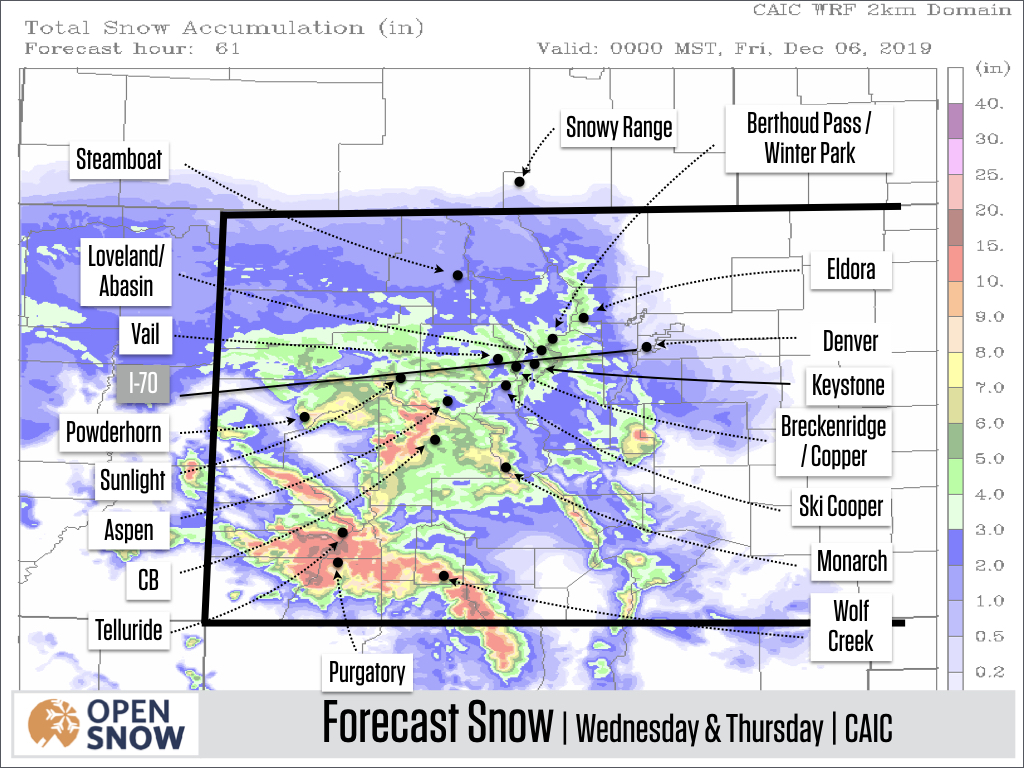 And the National Weather Service has bumped up their totals to be in line with a model consensus, now showing 2-6 inches in the central and northern mountains where previous forecasts had less snow. 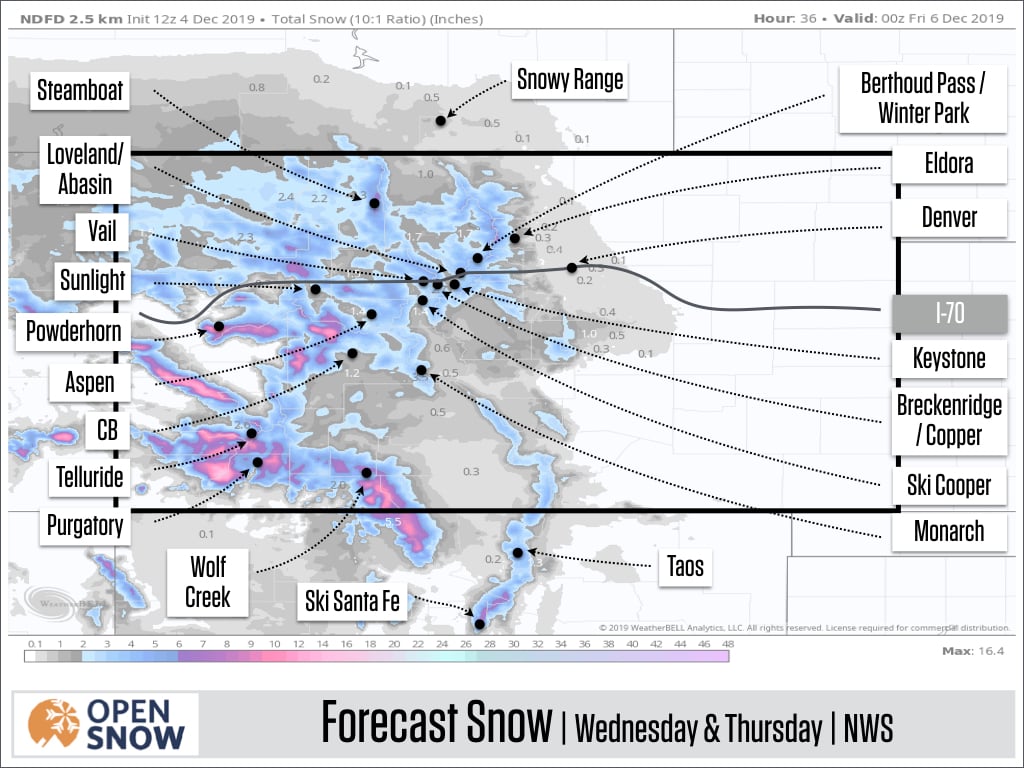 For a few days, and because of a few models hinting about more snow in the central and northern mountains, I’ve been talking about a general 2-6 inches in the central and northern mountains with up to 5-10 inches in the southern mountains. So this northward shift in the snowfall is welcome though not totally unexpected. And with the model updates, if anything, I am less confident of 6+ inch amounts in the south and more confident that we’ll see 2-6 inch amounts everywhere, with maybe an upside surprise around Steamboat as some models hint at higher totals there.

The takeaway is that Thursday morning and Thursday midday should offer the softest snow, and the snow quality will be a bit on the thick side due to warmer temperatures. This is OK because the thicker snow can nicely cover and cushion any harder base snow that has developed over the last few days.

Following dry weather on Friday and Saturday, we should see snow from Sunday morning through Monday midday.

During this time, all models show moderate energy tracking through Colorado from the northwest and west. 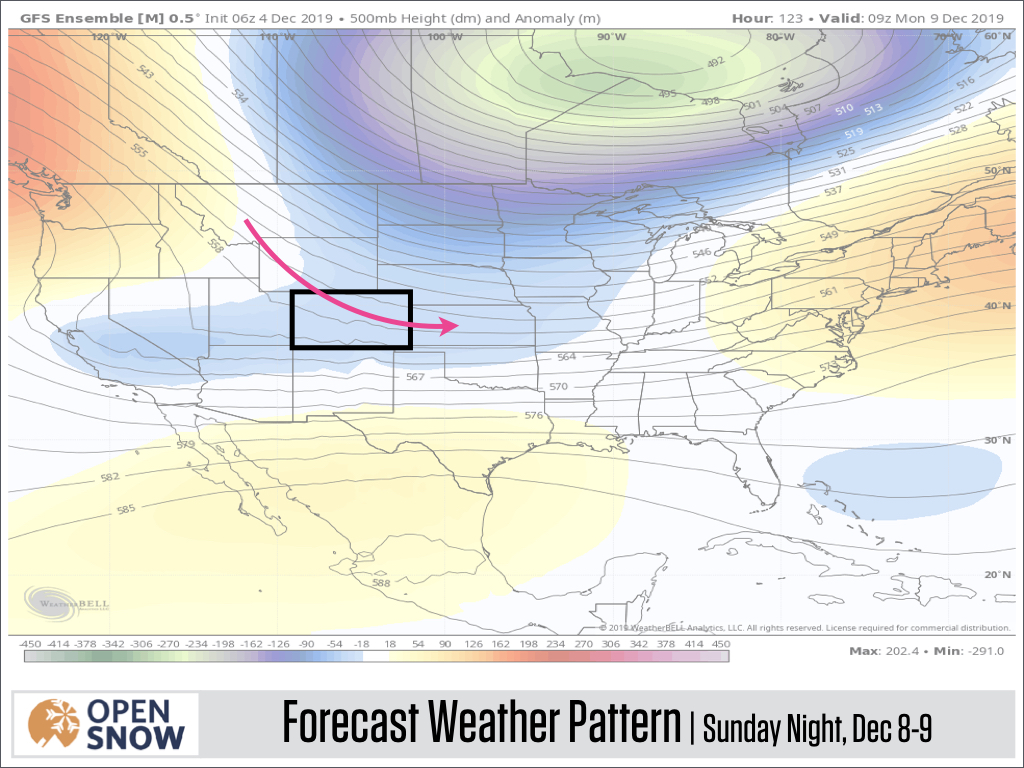 This Sunday/Monday storm will be stronger but have less moisture than the storm on Thursday. The models equate this with 4-8 inch snow totals, so a bit more than the Thursday storm. If these forecasts hold, it looks like Sunday afternoon could offer some new snow, and the best powder would be on Monday morning, likely in the northern mountains with a few spots in the central and southern mountains also seeing the deeper totals thanks to northwest winds from Sunday night into Monday morning.

The next storm that we’re looking for will arrive sometime late next week or next weekend, roughly between Thursday, December 12 – Monday, December 16. I am keeping my expectations very low for this time period because the trend in the models has been to keep this storm just a bit too far to the east and to lessen the chances for big snow here in Colorado. We are still 12+ days away so there is time for the models to swing the storm in any direction, but again, I am keeping my expectations low and if the storm does materialize, perhaps the northern and northeastern mountains would be favored. 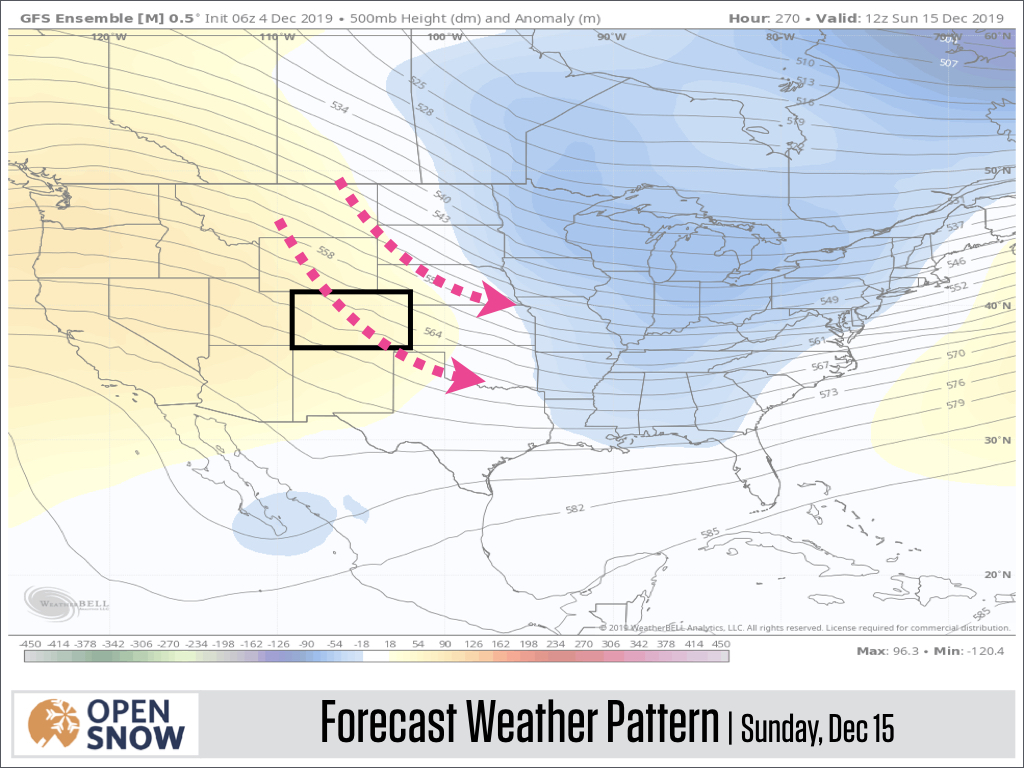 Looking out into fantasy land, or the 15+ day forecast, all models are trending toward a signal that would bring storms more directly west-to-east into the Rockies (rather than sliding east of us like the potential storm from Dec 12-16). I am cautiously optimistic that this signal could mean a more active final 10 days of December. But again, we’re looking out into fantasy land of 15+ day forecasts, so take this outlook with a big, big grain of salt. 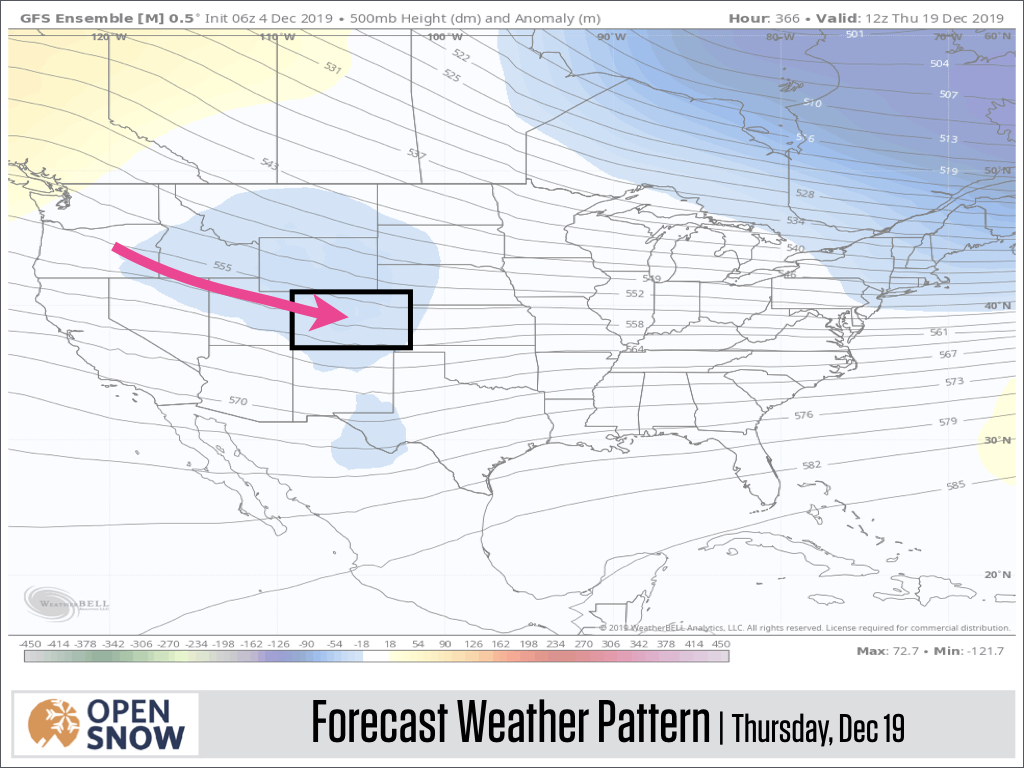 PS – There are big changes to my upcoming talks in Breckenridge and Basalt. Please look below for details!

Breckenridge: Dec 6 @ Colorado Mountain College Breckenridge
Update: Startup Weekend has been postponed, and my talk may or may not happen on Friday evening, independent of Startup Weekend. Stay tuned to this space as I will post another update here when I know more.

Basalt: Dec 12 @ Bristlecone Mountain Sports
Update: Tickets are sold out (thank you!) and there is now a waitlist. More details