Some powder on Thursday, Sunday, and Monday

Snow began to fall late on Wednesday night, and Thursday morning’s snow reports show anything from a dusting to 6 inches. We’ll see an additional 2-6 inches accumulate through the day on Thursday with temperatures in the 20s. The next storm should bring 4-10 inches of snow from Sunday into Monday with the softest snow likely on Monday morning. After that, we’ll be close to the storm track, but to get a significant storm we’ll need luck on our side.

If you are planning to attend my talk on Friday, December 6 in Breckenridge (now Silverthorne) or Thursday, December 12 in Basalt, please see the “Announcements” section at the bottom for important changes!

The satellite animation on Thursday morning is beautiful and clearly shows the spin of today’s storm and some of the energy that will bring us snow on Sunday into Monday. This is the “Water Vapor” image and captures the movement of water vapor in the middle and upper parts of the atmosphere. Fun fact: Water vapor is invisible to the human eye, but not to satellites:-)

Our current storm dropped flakes starting after midnight on Wednesday night, and as of Thursday at 600am, snow reports and snow stake cams show a range of a dusting to 6 inches.

The deepest snow stake cam is at Irwin, which is a cat skiing operation about 8 direct miles west the ski area of Crested Butte. There was an inch or two of snow on the stake before this storm started. 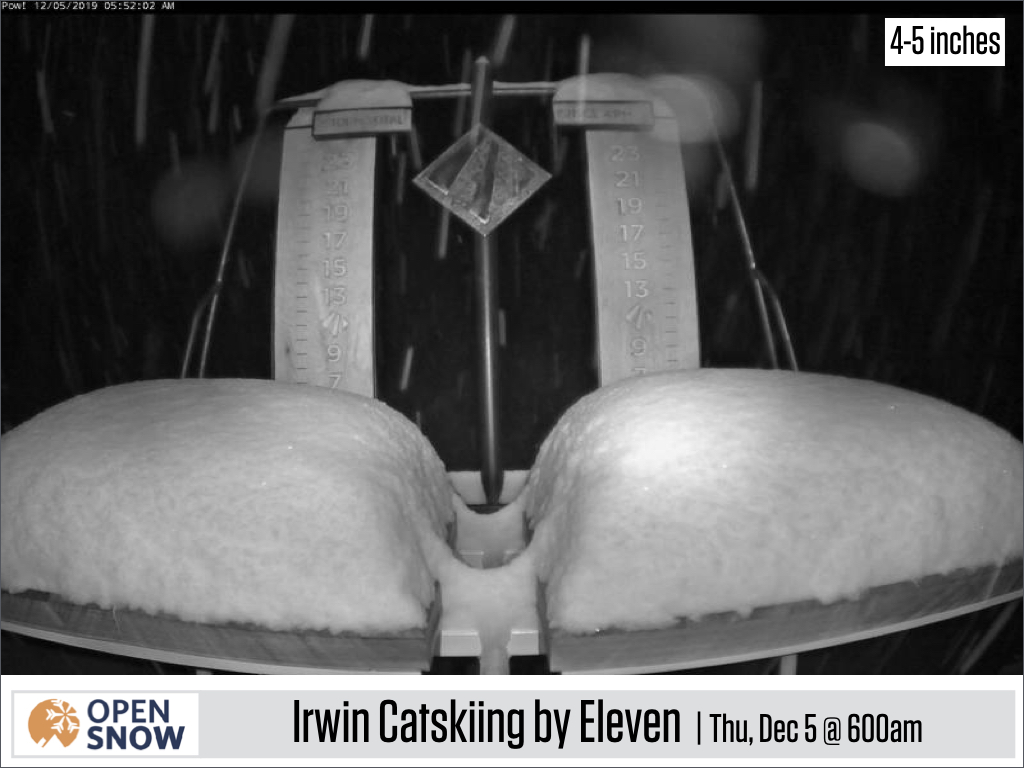 For the rest of the day on Thursday, snow should continue to fall. Temperatures are warm, in the 20s, so the snow will likely be a bit thicker and denser. While I love blower pow, a thicker coat of snow can help to soften the base and is still fun to ski or ride, so no worries about the temperatures. Also, with a lot of moisture in the air, I’ve spoken about the chance that snow totals could go above the general 2-6 inch forecast, and it looks like we’ll have this upside surprise in a few spots as we could see an additional 1-6 inches through the rest of Thursday. 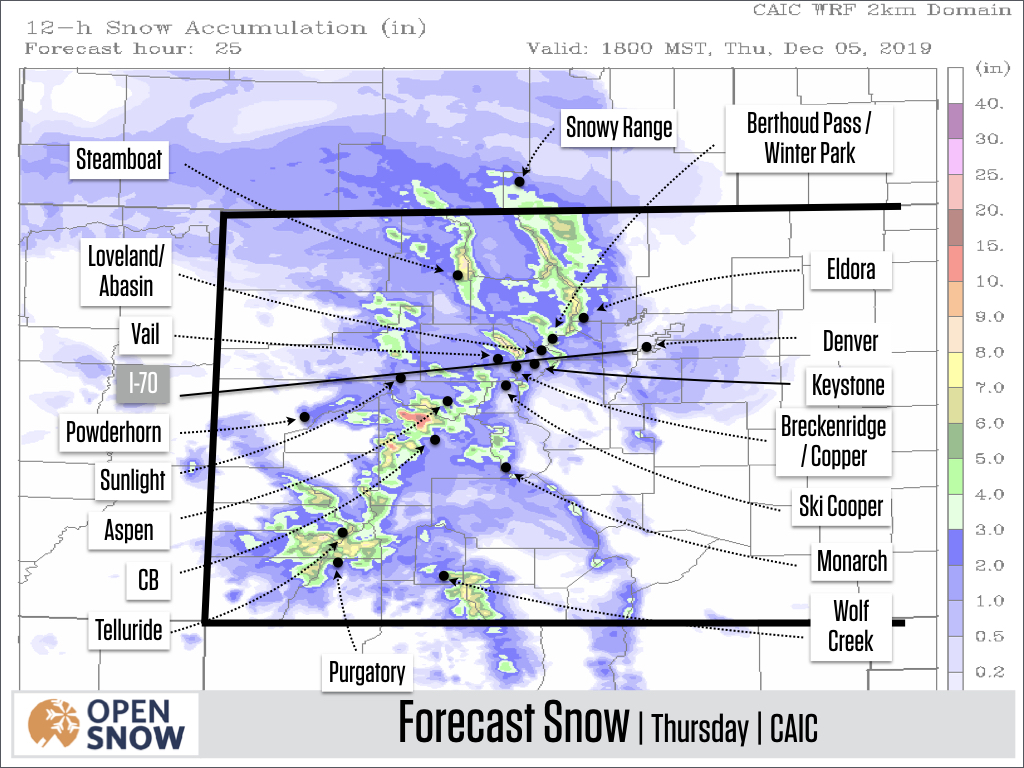 Favored spots for this additional snow are Thursday morning in the southern mountains and through Thursday afternoon in the central and northern mountains (with many models showing Steamboat having a chance for the higher totals).

Following dry weather on Friday and Saturday, we should see snow from late Saturday night through Monday afternoon (and light snow might continue into Tuesday in the northern mountains).

This storm’s energy is moderate, and the storm's moisture is low-to-moderate as well, and neither of these two factors gets me excited for big snow. However, the duration of the system – 24 to 36 hours – might help to bring reasonable snow totals in the 4-10 inch range.

For timing, it looks like all mountains should see some fresh snow on Sunday, and then with additional snow on Sunday night, the softest powder will likely be on Monday morning. I am still uncertain about the snow on Sunday night into Monday and whether it will focus on the northern mountains in northwest flow or if the storm’s energy will favor another part of the state.

In the past 24 hours, there started to be slight agreement among the models when looking at the forecast for the middle of December.

Following the storm on Sunday and Monday (December 8-9), the next chance for snow will be around Friday, December 13th. This system could do anything from miss us entirely, just clip us, or maybe it could hang around and bring moderate snow totals. This is why, in the summary above, I said that we’ll need some luck to get significant snow. 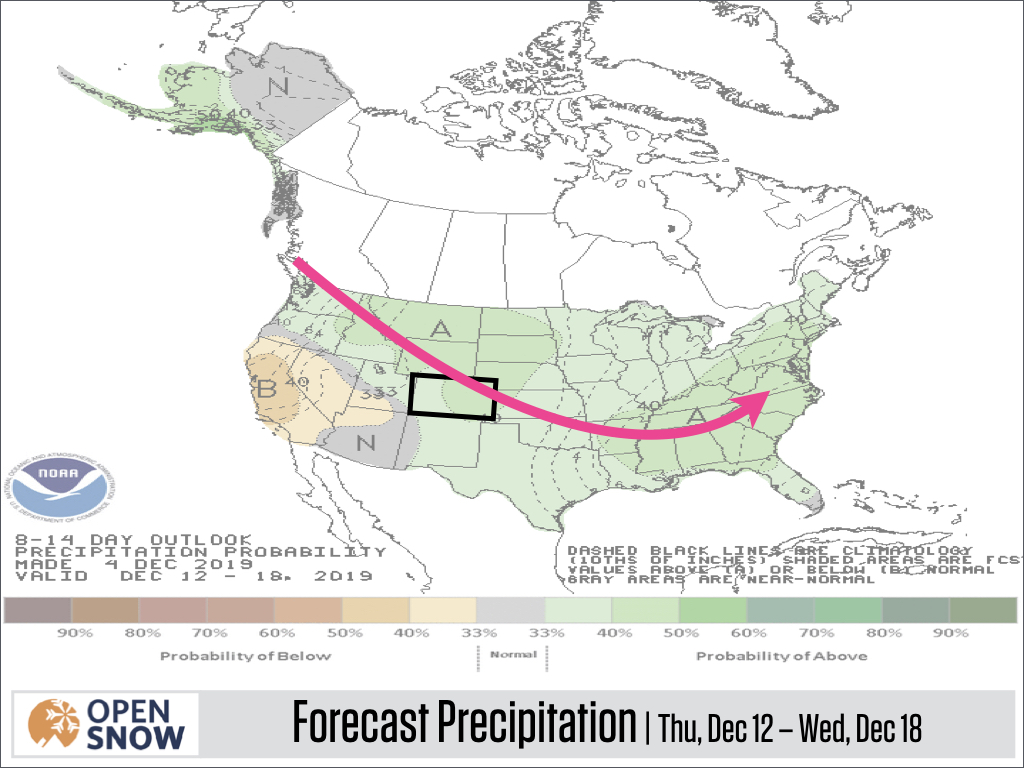 Around the middle of December, most models show that the storm track will stay just to the north and east of Colorado. This doesn’t preclude storms from bringing us snow, but it also pushes the odds of big snow downward. Said in another way, all hope is not lost, but I am not jumping up and down with excitement about our snow chances. If you have any snow-coaxing rituals (wash your car, trail maps in the freezer, etc) now might be a good time to break them out.

PS – There are changes to my upcoming talks in Breckenridge (now Silverthorne) and Basalt. Please look below for details!

SOLD OUT
Basalt: Thursday, December 12
* Tickets are sold out (thank you!) and there is now a waitlist
* More details