Wednesday brought light snow to the northern mountains with 2-5 inches of accumulation. Thursday will likely bring more light snow with accumulations between 1-4 additional inches. Friday will be dry, and Saturday will be mostly dry with just a small chance for a few showers in the northern mountains. The next storm will bring significant snow to most mountains from Sunday through Tuesday and significant powder is possible. I still have low confidence about how much snow, which mountains will get the most, and what days will offer the best powder.

We are in the middle of a storm that started in the northern mountains on Wednesday morning and will continue through Thursday evening. This storm is rather strong and the jet stream is overhead, and these factors usually combine to produce moderate-to-significant snow totals. In this case, though, I was concerned that we lacked enough moisture to produce higher snow totals, so I kept my expectations low, to 1-5 inches across Wednesday and Thursday.

The 24-hour snow reports from Wednesday morning to Thursday morning show that while most mountains did receive just a few inches, there are a few high-side surprises.

The storm is only half over as more snow will accumulate over the northern and central mountains through Thursday. We could see another 1-4 inches through Thursday, and this will keep conditions soft, especially on the north-facing terrain. 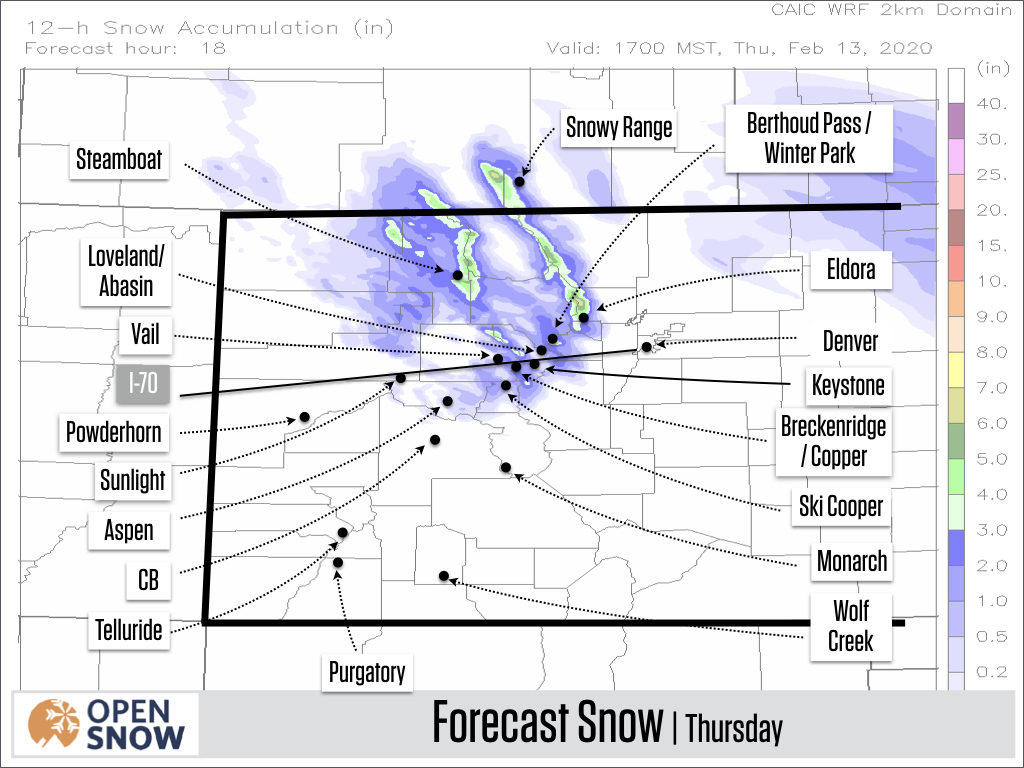 The snow should finally wind down on Thursday evening.

Friday will be dry and sunny.

On Saturday we will see a weak storm brush the northern mountains early in the day. There might be a few snow showers with light accumulations. Otherwise, it looks like Saturday will be dry for most mountains. 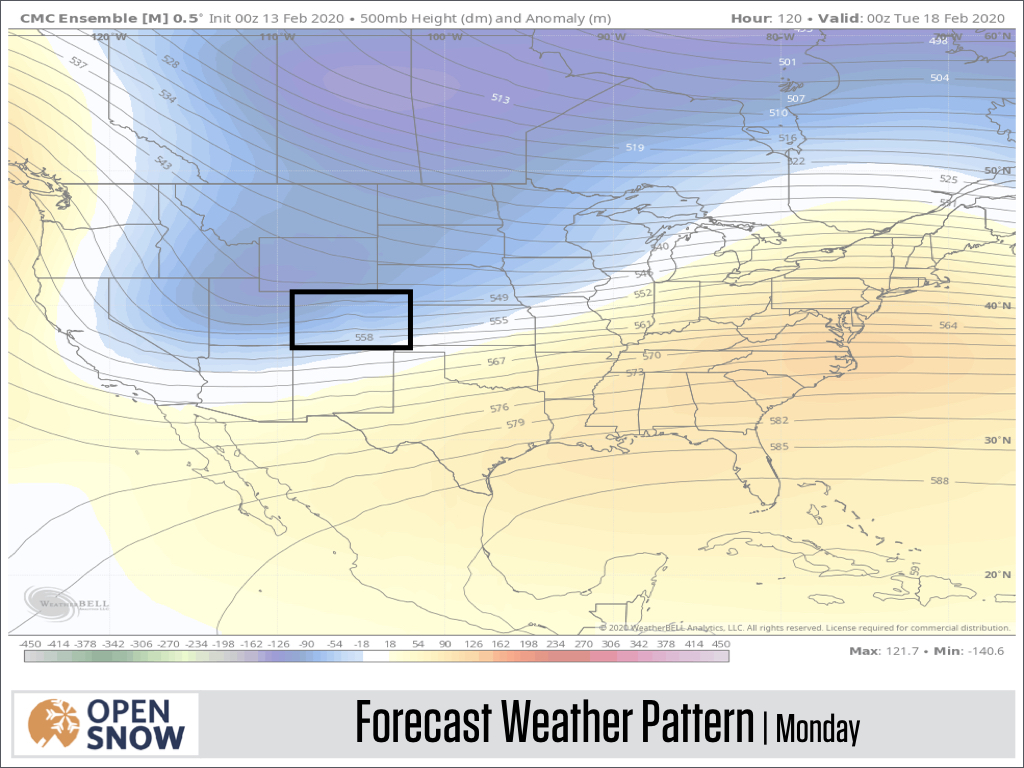 I have reasonable confidence that all mountains will see snow, that average accumulations should be 6-12 inches, and we should enjoy one if not two powder days. Despite the differences in the details of all of the models, they all show plenty of moisture heading our way, plenty of storm energy (vorticity) to help lift this moisture and turn it into snow, and that the jet stream will be overhead, which we know from the previous storms can lead to streaks of intense snowfall and higher-than-expected totals.

When it comes to figuring out which day will be the best powder day, or which mountains will see the most snow, my confidence is quite low. Every model has a different take on the details of the timing of the cold front, or the location of the jet stream, and other factors, so it’s a little early for me to make a detailed call. At this point, I’d hedge toward powder on Monday with the deepest amounts in the central and northern mountains.

The Canadian model’s forecast is a rough average of many other models. I don’t necessarily agree with the placement of the bullseyes of precipitation, but the general idea of up to 1 inch of precipitation (12+ inches of snow) seems pretty good. 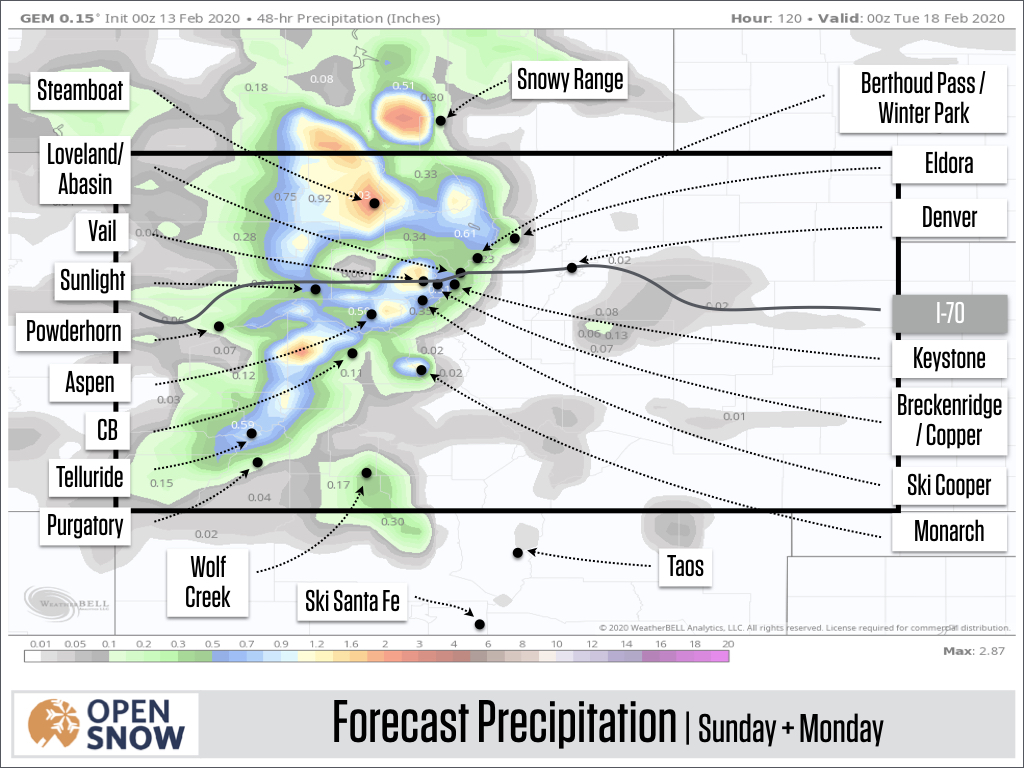 The presence of the jet stream overhead gives us a good chance of going above the model snow forecasts and also extending the snow to places that wouldn’t necessarily be favored by winds from the west-southwest or west.

If you’re heading to the mountains for the holiday weekend, the timing of the storm lines up pretty well, though if snow continues later on Monday it might be a tough drive home and/or you might want to stay for Tuesday morning. These are details that we’ll (hopefully) figure out over the next day or two.

Following the release of the redesigned OpenSnow Android & iOS apps, we're excited to bring these fresh updates to the OpenSnow website! This update is based on feedback from OpenSnow users during the past year, along with ideas from all of us at OpenSnow because, like you, we are obsessed with finding great snow.