Thursday brought snow showers to the northern mountains with light accumulations and two surprises as well. Friday will be dry and Saturday will be mostly dry. The next storm will bring snow from Saturday night through Tuesday with 6-12 inches across most mountains and perhaps 20+ inches for a few spots in the northern mountains where a combination of positive factors stall for a half a day or a day. There should be some powder on Sunday, deep powder on Monday, and leftover powder on Tuesday. Beyond this storm, we will likely trend toward drier weather for the rest of next week and weekend (roughly February 19-23).

To recap Thursday, we saw snow showers hang around the northern mountains. While we had positive factors like strong storm energy (vorticity) and the jet stream overhead, accumulations were mostly limited to just an inch or two because we were lacking moisture.

However, similar to what happened in late January, the combination of the jet stream overhead and just enough moisture in a few spots led to surprisingly deep snow totals at two northern mountains, this time at Steamboat and Vail.

At Steamboat, the official snow total from Wednesday through Thursday was 11 inches, but this video shows that it was total fluff and skied much deeper than the report at the top of the mountain. And at Vail, the official total was 6 inches, though I heard reports of exceptional skiing on north-facing aspects with the depth feeling more like one foot. Predicting these high-end surprises during Northwest flow continues to be the trickiest part of forecasting snow in the mountains of Colorado. One day we’ll figure it out!

Now on Friday, we will see sunshine all day with warming temperatures reaching the upper 20s to low 30s.

On Friday night into Saturday morning, a weak storm will bring a few snow showers to mountains near and especially north of I-70. Steamboat and Cameron Pass are in the best position to catch a few flakes before Saturday at noon.

The rest of Saturday should be mostly dry for most mountains though I can’t rule out a few snow showers over the northern mountains.

Then from Saturday night through Tuesday, we will see snow from a complicated storm. This system has upside potential because several factors will stall over Colorado for about 48 hours and the combination of all of these factors hanging around for a long time should lead to some upside surprises (as compared to a storm that moves quickly and brings us snow for a much shorter amount of time).

Here’s my best estimate of how this storm will shake out.

Saturday night and Sunday will bring the most snow to the northern mountains, central mountains, and the north side of the southern mountains (Telluride, Silverton). This time period will be warm, so the snow should be thicker and dense. The wind direction will be from the west-southwest which generally favors Steamboat, Sunlight, Beaver Creek, Snowmass, Crested Butte, with Telluride and Silverton on the fence. If the jet stream moves overhead a bit earlier than expected, other northern mountains could see more snow, but if we’re basing the snowfall rates on wind direction, the mountains listed above are favored.

Sunday night through Monday afternoon should bring snow to all mountains with times of intense snow thanks to a cold front moving through as well as the jet stream stalling over Colorado. Temperatures will cool so snow quality will become fluffier, and this is what we want to see with fluffier snow on Monday on top of denser snow from Sunday. The wind direction will switch to blow from the west and northwest which should favor most northern mountains.

Monday night through Tuesday will become colder and moisture should decrease. This means that snowfall should decrease as well. However, if the storm slows a bit, or enough energy hangs around, we could see some snow after lifts close on Monday and that would make Tuesday morning soft and fun.

Total snowfall should be in the range of…

Here is the latest precipitation forecast. Don’t look too closely at the bullseyes, just try to get a general feel. 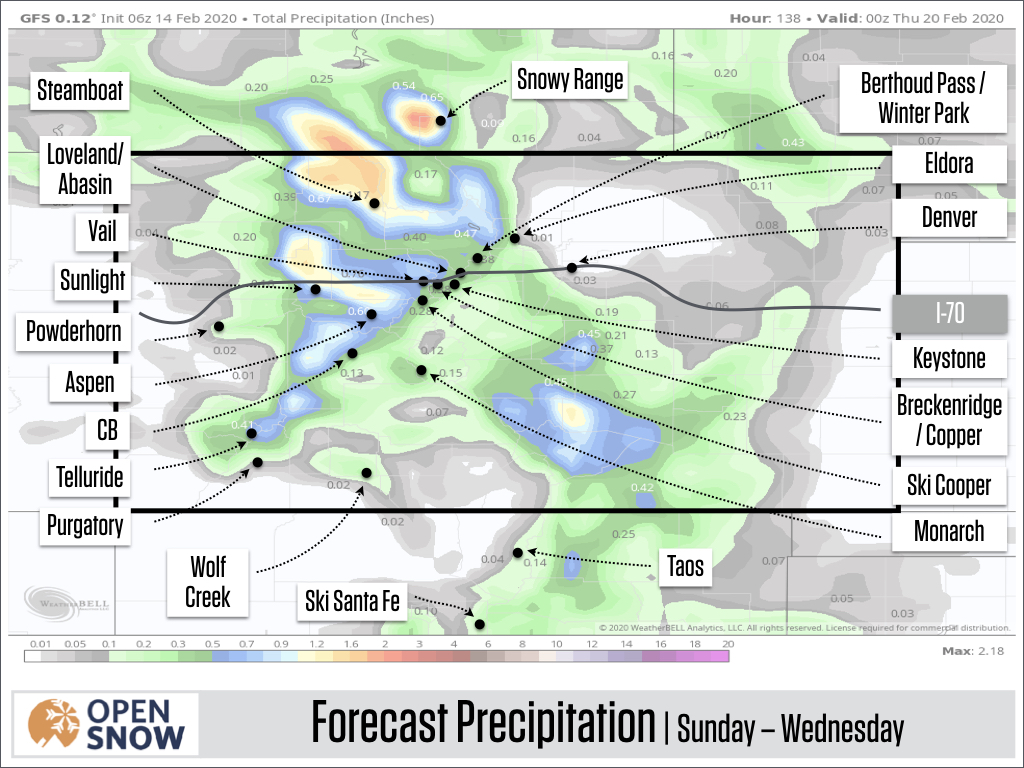 The University of Utah's multi-model forecast shows the potential for significant snowfall as well as the uncertainty in the forecast.

Steamboat is favored with the highest totals due to the potential for significant snowfall for a longer amount of time. 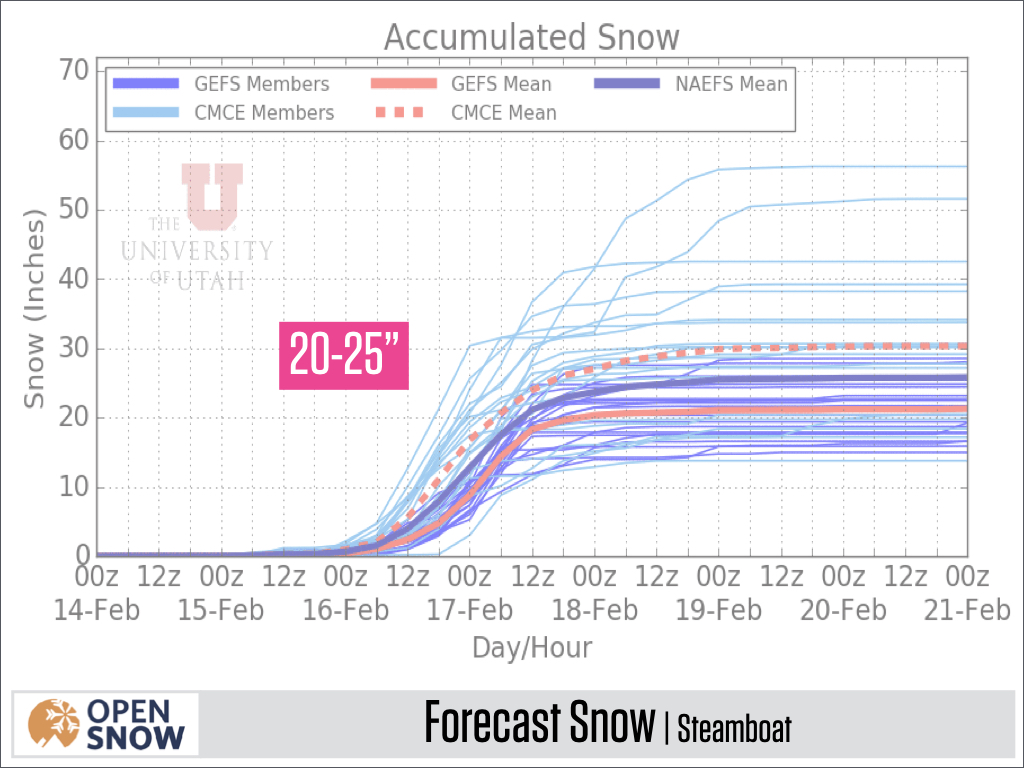 Vail is representative of many northern mountains. 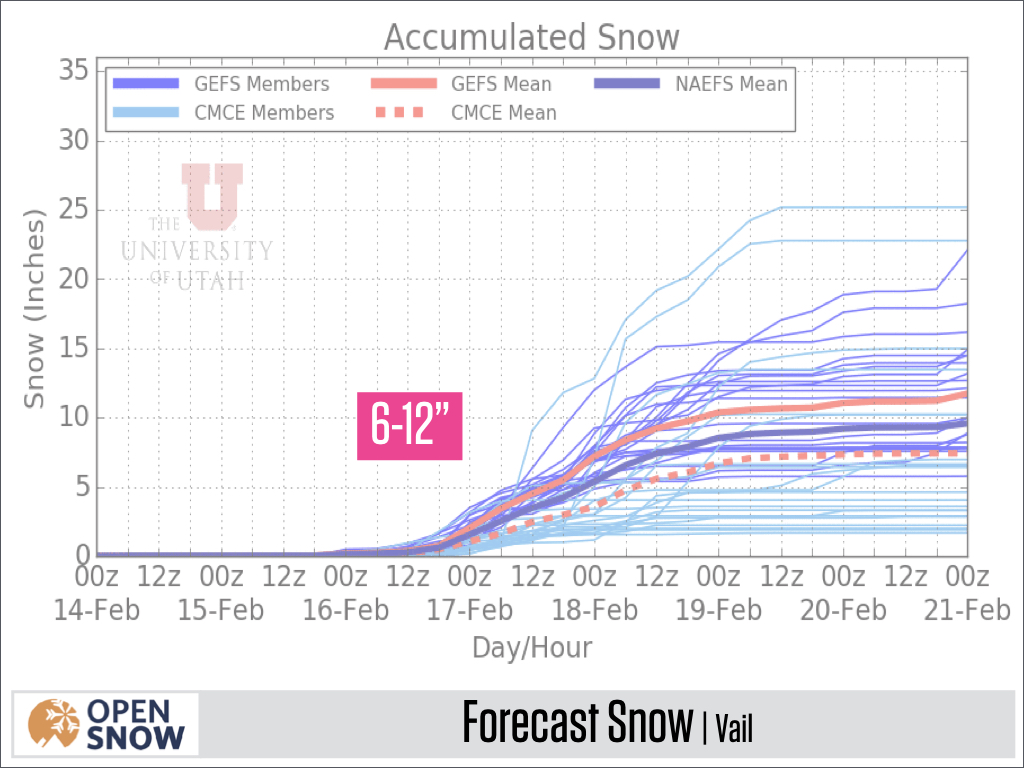 This is for the Aspen Airport, so there could be more at the ski areas, especially Snowmass which can do well early in the storm with a wind from the west-southwest. 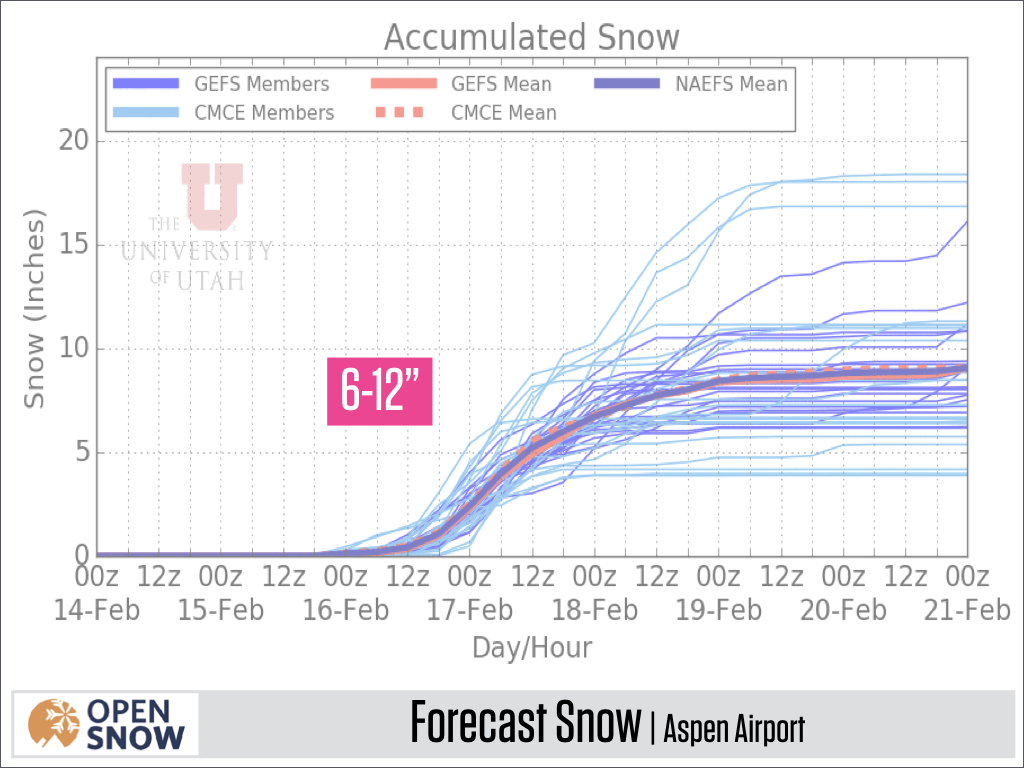 Crested Butte gets its highest snow totals from a west-southwest wind direction. 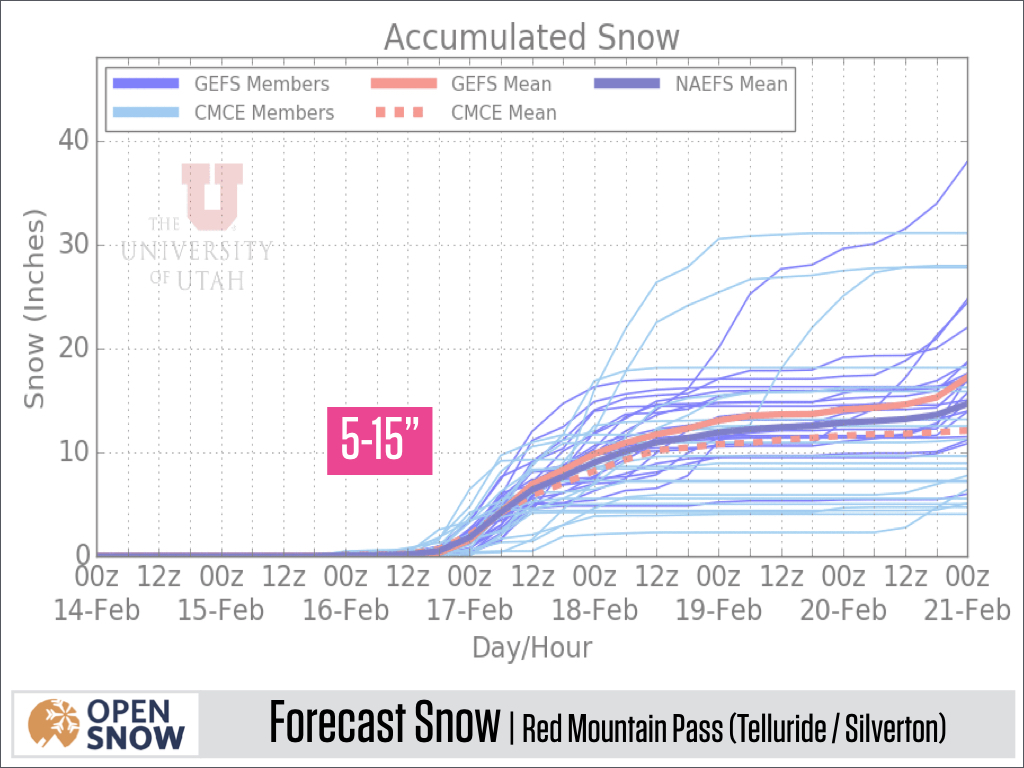 To recap, all mountains will see snow from Sunday through Monday and the deepest powder will likely be on Monday.

Following the Sunday/Monday/Tuesday storm, it looks like odds favor dry weather for the rest of next week and next weekend (about Wednesday, February 19th through Sunday, February 23rd).

After that, the longer-range models hint that our next chance for a storm will be around Monday, February 24th to Tuesday, February 25th.

My next update will be on Saturday morning.

Following the release of the redesigned OpenSnow Android & iOS apps, we're excited to bring these fresh updates to the OpenSnow website! This update is based on feedback from OpenSnow users during the past year, along with ideas from all of us at OpenSnow because, like you, we are obsessed with finding great snow.