Wind and cooling but not much (or any) snow

Wednesday's wind gusts of 50+mph led to the extreme growth of the Cameron Peak Fire. Thankfully, a cold front on Wednesday night slowed the wind speed, changed the wind direction, and is also helping higher elevation northern mountain resorts to make snow. The general outlook for the next 10 days, though, is for more wind, a few cool bursts, and little natural snowfall.

Wednesday's wind gusts over northern Colorado were the big story, with midday speeds of 50+ mph. 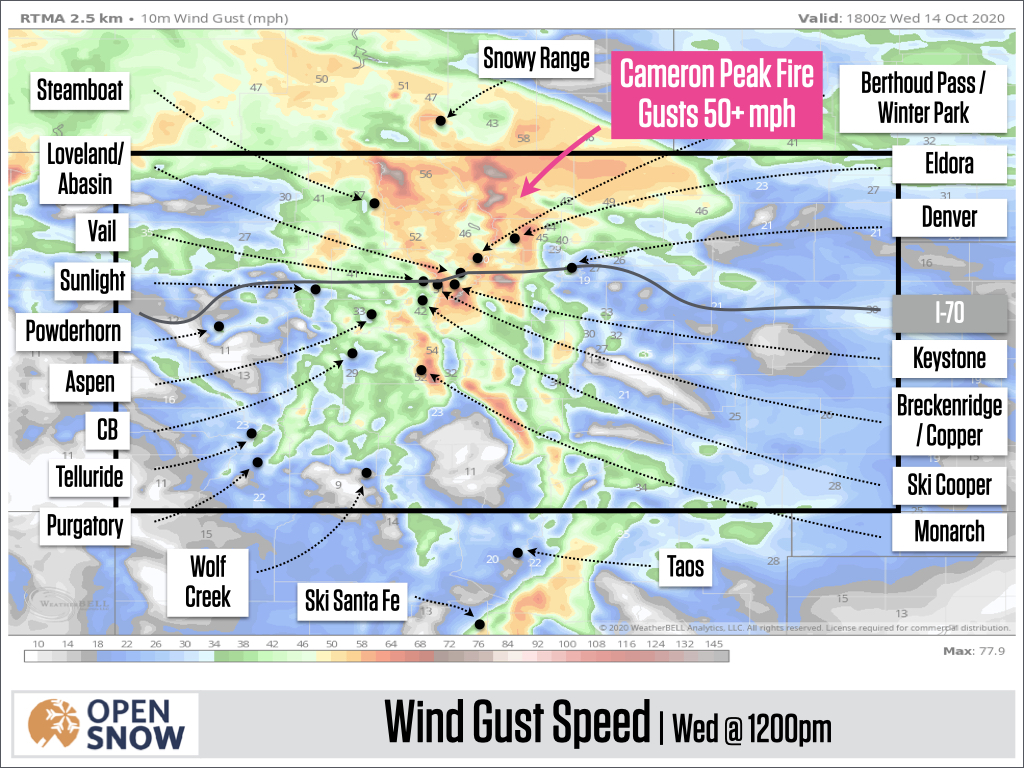 These strong winds were the primary factor that allowed the Cameron Peak Fire to spread 15+ miles to the east in just one day. I am not a wildfire expert, but for perspective, I read reports that this 15+ mile spread in one day was extreme and is similar to the rapid spread of the Hayman Fire here in Colorado in 2002 and some recent fires in California.

The latest incident map from NoCoAlerts.org shows that evacuations are now in place all the way to Horsetooth Reservoir, just to the west of the city of Fort Collins. 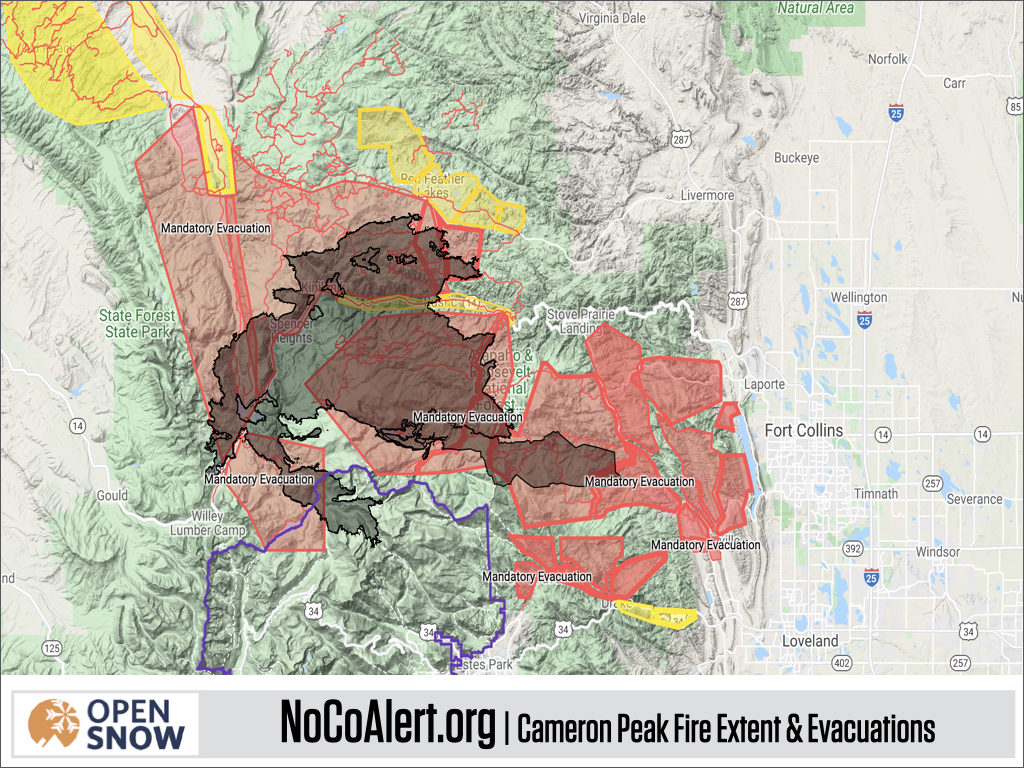 The Colorado Daily Snow is a place to talk about snow and weather, but I have to talk about the Cameron Peak Fire in this case because it is a weather-related story and its extreme behavior is driven by the weather.

The fire monitoring tools that we now have access to is incredible. Satellites can detect the heat signature of fires in near real-time and at high resolution. Satellites can also track the smoke from the fire, and in this case, the smoke was blown east over a thousand miles into the midwest. Plus, this smoke can be forecast and we have some of these smoke forecast maps on OpenSummit.com.

What's so difficult for me and all meteorologists, though, is to be in scientific awe of what these monitoring tools can provide and also to be in mental pain because we understand the ramifications of what the images mean. People are losing land and homes.

The months of September and October are a VERY dangerous time for wildfires because our wind speeds can be very fast. While wind speeds during the summer are usually lighter, the jet stream moves closer or over us during fall, winter, and spring, and this usually means that we have many times of stronger winds. While it seems like September and October would be less risky months due to cooling temperatures, the increase in wind speeds has the opposite effect and increases fire danger.

Thankfully, a cold front arrived in the northern mountains and the front range on Wednesday afternoon and this helped not only to cool temperatures around the fire but it also reversed the wind direction to blow from the east at the lower elevations, which should slow the spread of the fire on Thursday.

The map below shows the temperature change from Wednesday morning to Thursday morning. 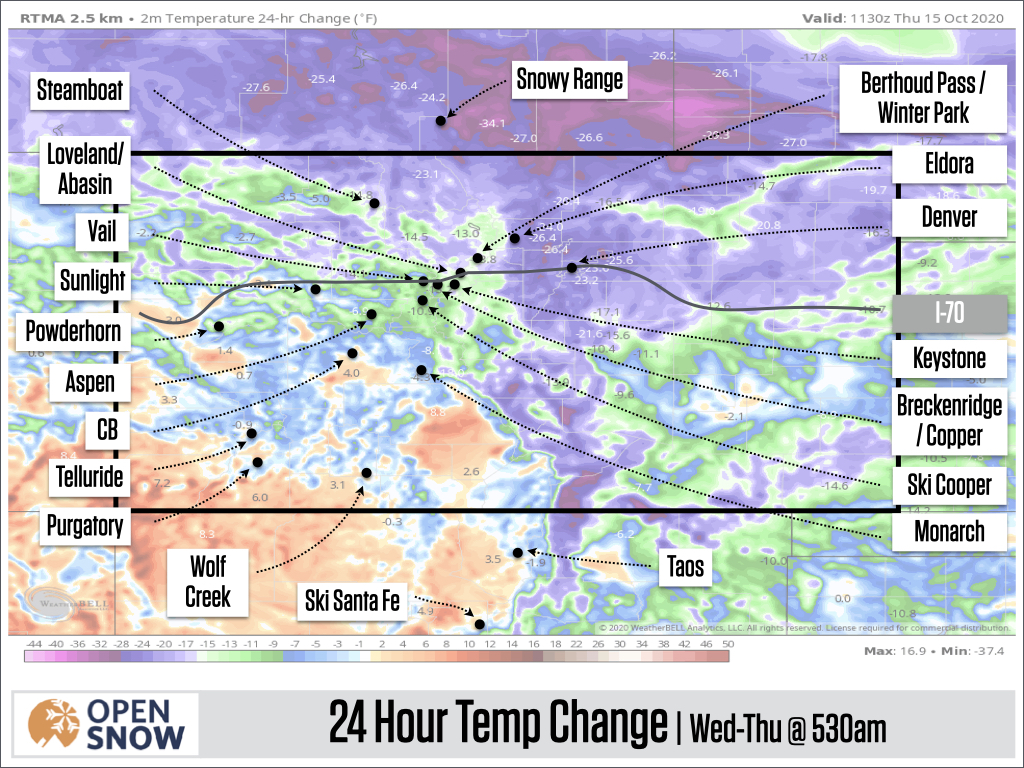 Readings are about 7-20°F colder on Thursday morning compared to Wednesday morning, and these colder temperatures are helping Arapahoe Basin and Loveland make snow, and that's likely true at Copper, Keystone, Breckenridge, and Winter Park as well (not every resort has a webcam that points at areas where snowmaking occurs, so it's not always possible to know which areas are making snow at the moment).

The cooler temperatures will stick around on Thursday, Thursday night, and Friday morning, so there will be a solid 36 hours of snowmaking weather. But then we'll warm up on Friday and Saturday with snowmaking likely constrained to the nighttime.

The outlook for the next 9-10 days is for more wind and only a low chance of snow.

The jet stream will be, on average, just to our north. To get storms, we generally want the jet stream near or south of us, so the map below is not what we want to see. 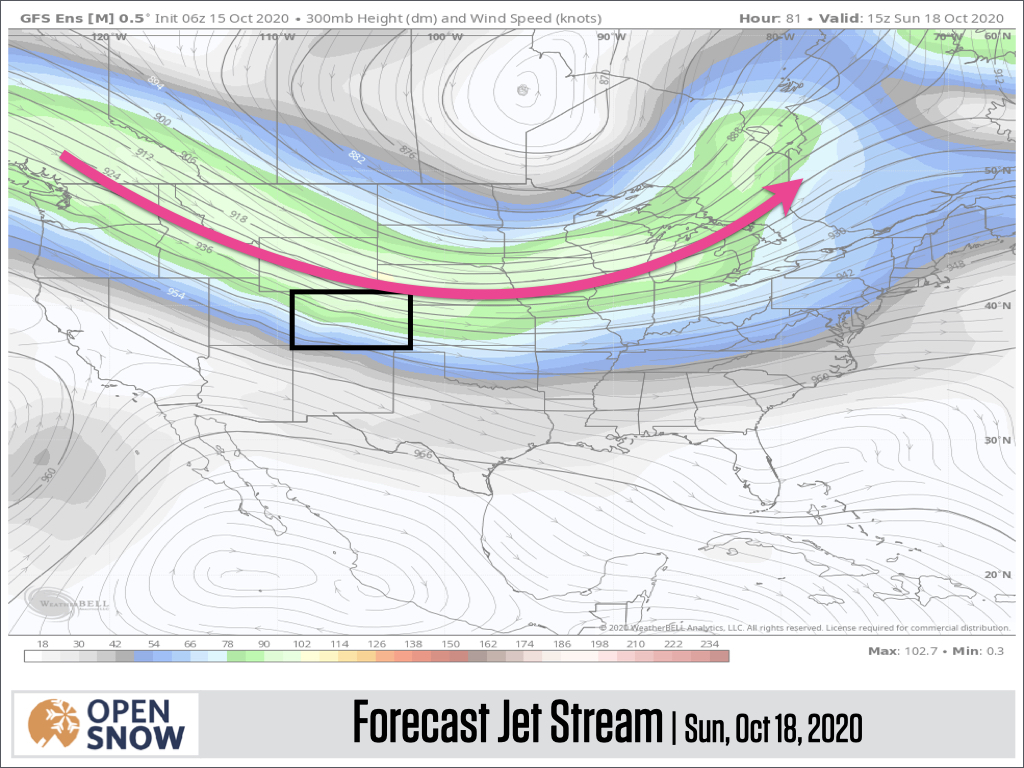 A jet stream just to our north likely means that we'll see more windy days over northern Colorado (which, unfortunately, will increase the chances for additional fire growth) and it also means that most of the snow will likely stay just to our north.

Here are the 9-day snowfall maps from three models through Friday, October 23rd, and they all show about the same forecast. 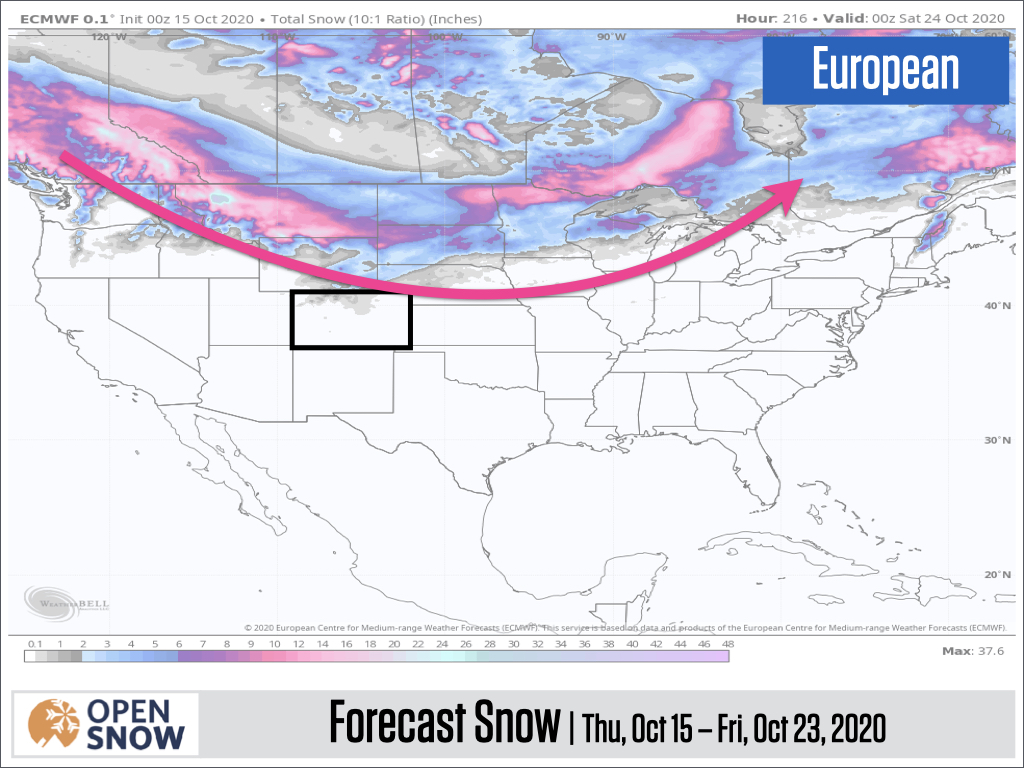 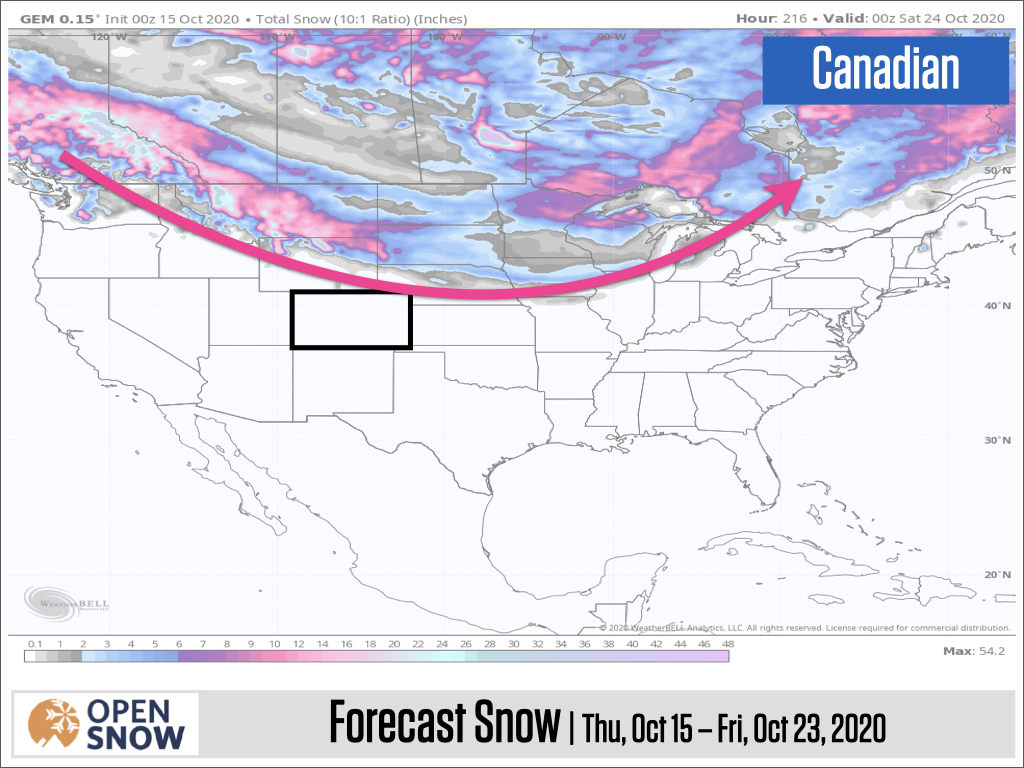 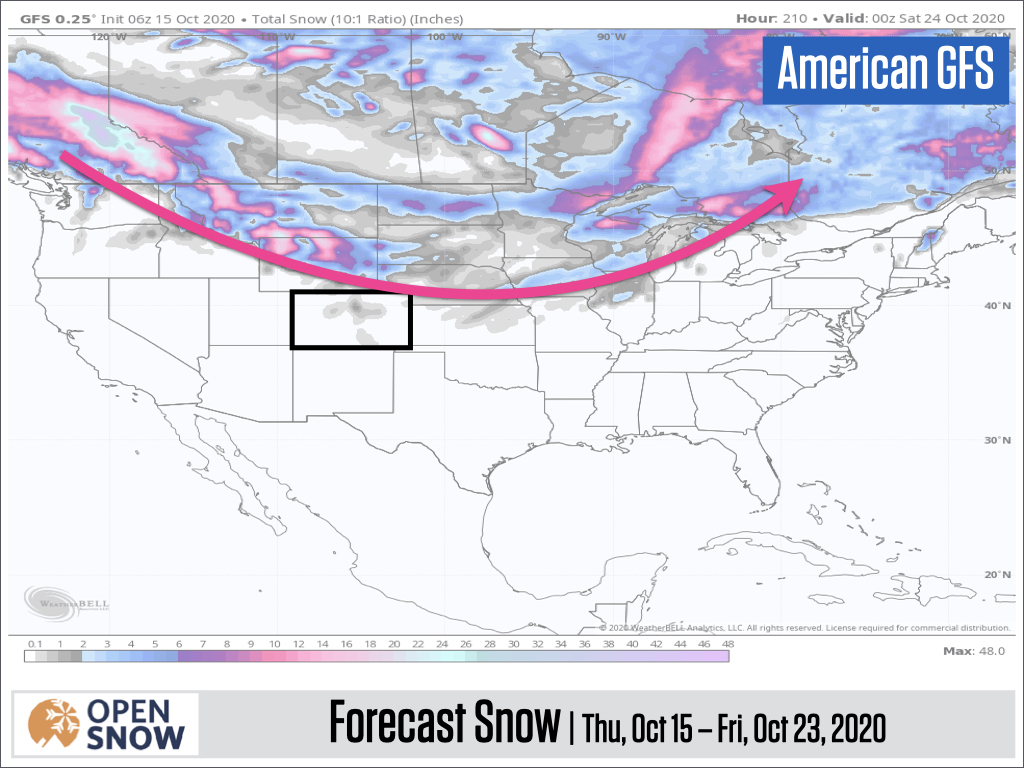 Most of the snow is forecast to stay near or just north of the general storm track, and that's what we expect from the relationship between the jet stream and the snow forecast.

There is some upside potential that is not shown on these maps. As storms pass near Colorado, it's possible that they could sag just a bit farther to the south and bring bursts of cooler air and light snow to our northern mountains. The best chance of this happening is late next week or the following weekend (between about October 22-25). The chance for significant snow during this time is still low, but it's a time that's worth watching, and I'll keep you updated. If you like to watch the models yourself, remember that during the last few storms, both the European and Canadian models have over forecast snow amounts and we actually saw weaker storms more in line with what the American GFS has been showing, so don't get too excited if one model run happens to show a strong system 8 days into the future.

PS – Join me for a virtual talk on October 15th (tonight!). I'll cover the forecast for the season and lots of other (fun) weather geekery. You'll also have the chance to win real-life prizes. This is all hosted by Neptune Mountaineering in Boulder. Stop by Neptune on Thursday before the show (1000am-630pm) to pick up raffle tickets, some OpenSnow swag (while supplies last), and look around the store. I'll be on-site handing out OpenSnow swag and saying hi (behind a mask!) between about 430pm-630pm. Then head home to watch the live stream of my talk. Details and tickets here! 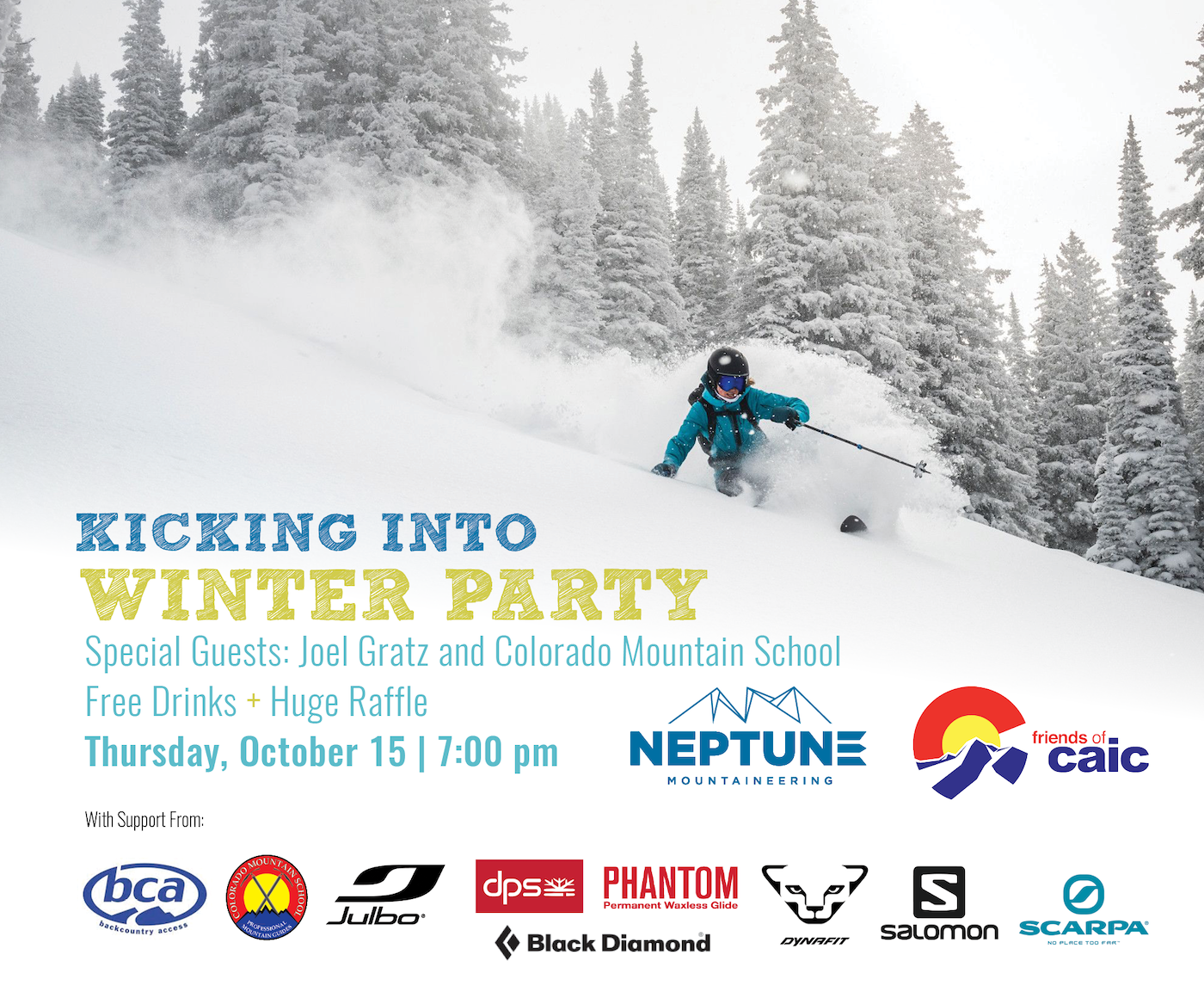