Update on snowmaking, smoke, and the long-term forecast

Friday morning has been chilly in the northern mountains and there is some snowmaking happening at the higher elevations. By Friday afternoon, temperatures will warm and wind speeds will increase over the northern mountains with more smoke likely. Looking ahead to the next 10 days, there are a few chances for cooler temperatures but the chances for significant snow are quite low.

Each morning I look at all the mountain cams across Colorado and it's fun this time of year to catch snowmaking in action. It looks like Vail fired up their upper-mountain snow guns.

Other mountains are making snow and the usual race to open is between Arapahoe Basin and Loveland. Temperatures during the past 36 hours have been cold enough to make snow without stopping, though looking ahead, warmer temperatures should mean that snowmaking will only occur at night over the northern mountains.

It takes roughly two weeks of good snowmaking for Arapahoe Basin and Loveland to open a trail or two, and we're on the tail end of the first week. If the forecast were for colder temperatures I would be more confident that we'll see a ski area open in the next 7-10 days, but with more marginal temperatures, I'm not so sure. We'll see!

On the same day that strong winds created a 15+ mile run of the Cameron Peak Fire just west of Fort Collins, the East Troublesome fire northeast of Kremmling also grew quickly. We should see strong winds again on Friday afternoon and the HRRR Smoke Model (pictured below on OpenSummit.com) shows that smoke from this fire will spread east into the northern Denver metro area. 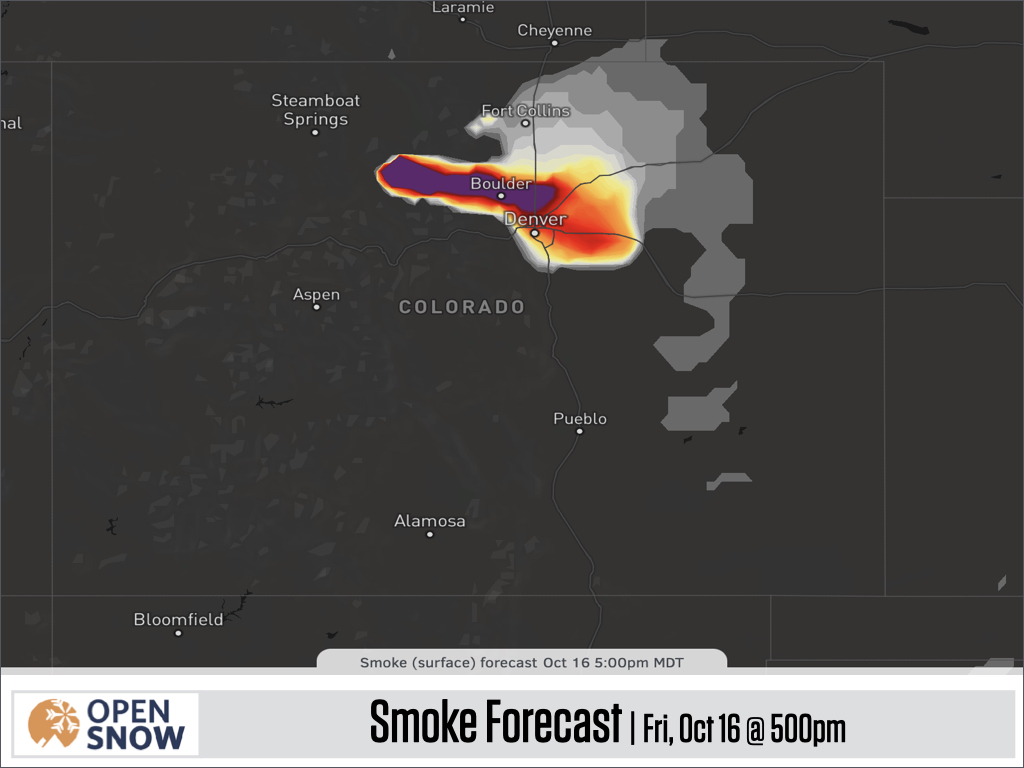 Unfortunately, we'll see strong winds over the northern mountains for many of the upcoming days and this could lead to more fire spread and more smoke near and downwind of the fires.

The weather pattern for the next 5-10+ days will not be very exciting for us. The storm track will stay just to our north and most of Colorado will experience temperatures that are warmer than average. 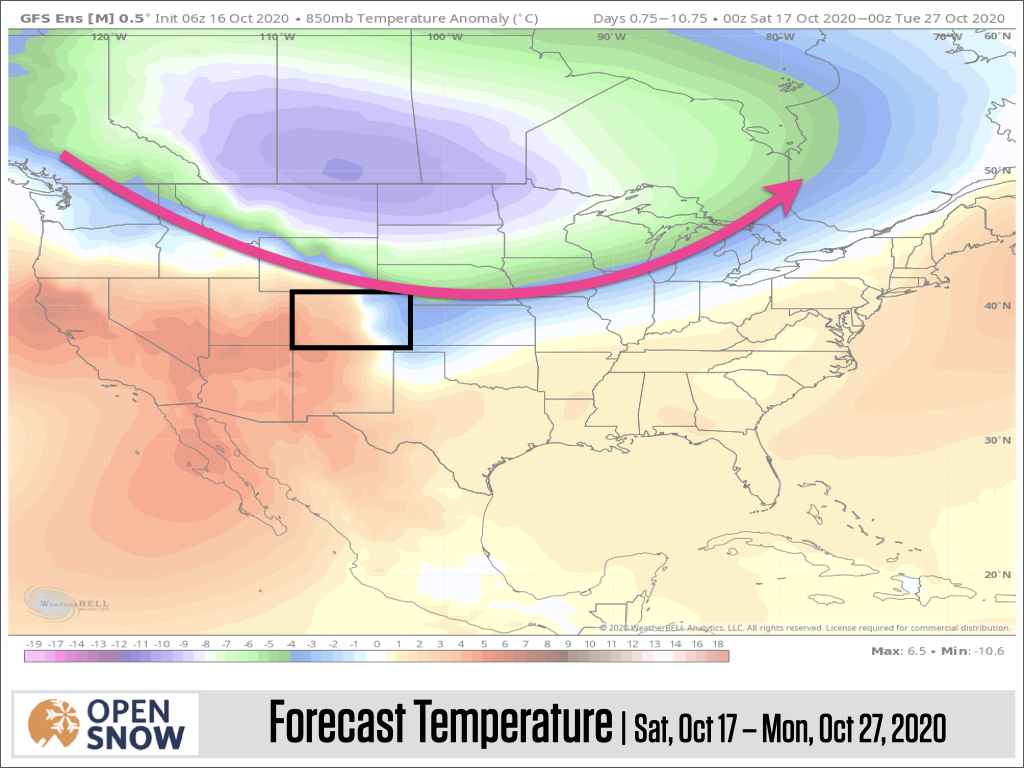 As storms pass by to our north, they will push colder air over the front range and perhaps some northern mountains near the continental divide. The best chances for this to happen are on Sunday and again later next week.

Even with some pushes of colder air, the odds of any measurable snow for the next 10 days from these side-swiping storms are very low. 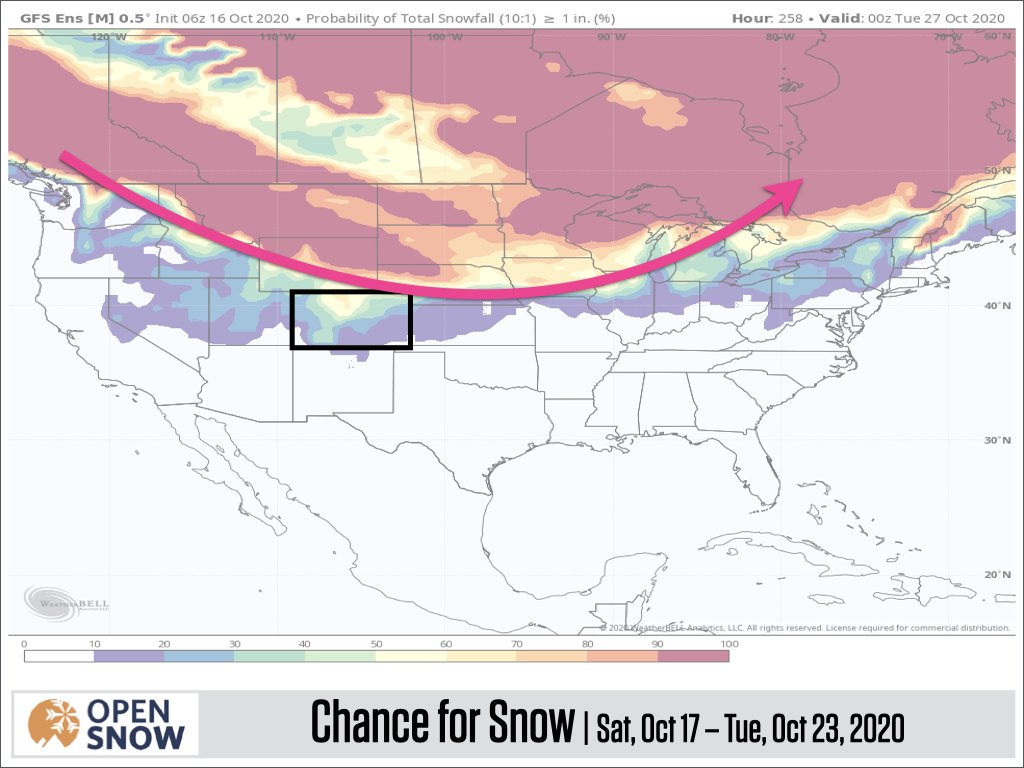 There is a chance that a storm could track farther south and west and bring snow to us here in Colorado, but most runs of most models are NOT advertising this more favorable scenario.

And that's that. I wish I had better news about less wind, cooler temperatures, and snow, but we have to take what the atmosphere throws at us.

PS – On Thursday night, Neptune Mountaineering hosted me for a virtual presentation and even though it was a virtual event, it was awesome in most ways. The night is a fundraiser for Friends of CAIC and the good news is that the same number of tickets were sold this year as there were last year when the event was held in person. So thanks to everyone that bought tickets, that stopped by the store ahead of time to pick up raffle tickets, OpenSnow swag, and say hi, and also for the questions and chats throughout the presentation.

The only bummer about the night was the lack of energy from hundreds of people in the store.

Instead of this scene from the talk in October 2019…

…here was the scene last night in October 2020 with just me, my wife, my son, bear, and a screen. 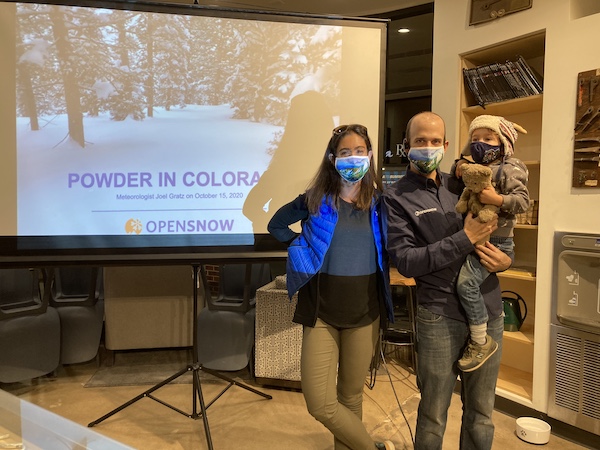 Hopefully, the energy of in-person events will return in a year!