Some hope for snow in the long-range outlook

Saturday and every day for the next week will bring dry weather to Colorado and windy conditions to the northern mountains which keep the wildfires burning. Looking ahead about one week, models are trending toward a storm with snow around October 25-26.

Multiple wildfires are still burning in northern Colorado, and the two major fires are the Cameron Peak Fire and the East Troublesome Fire. Both of these fires are being fed by gusty winds blowing from west-to-east, and as the fires grow each afternoon their smoke clouds push quickly to the east.

Saturday's smoke forecast shows a repeat of Friday with thick plumes of smoke pushing east across the northern mountains and over the front range cities by mid-afternoon and evening. The smoke forecast below goes out 18 hours into the future and is available on our summer site OpenSummit.com and on on the OpenSummit iPhone and Android apps. 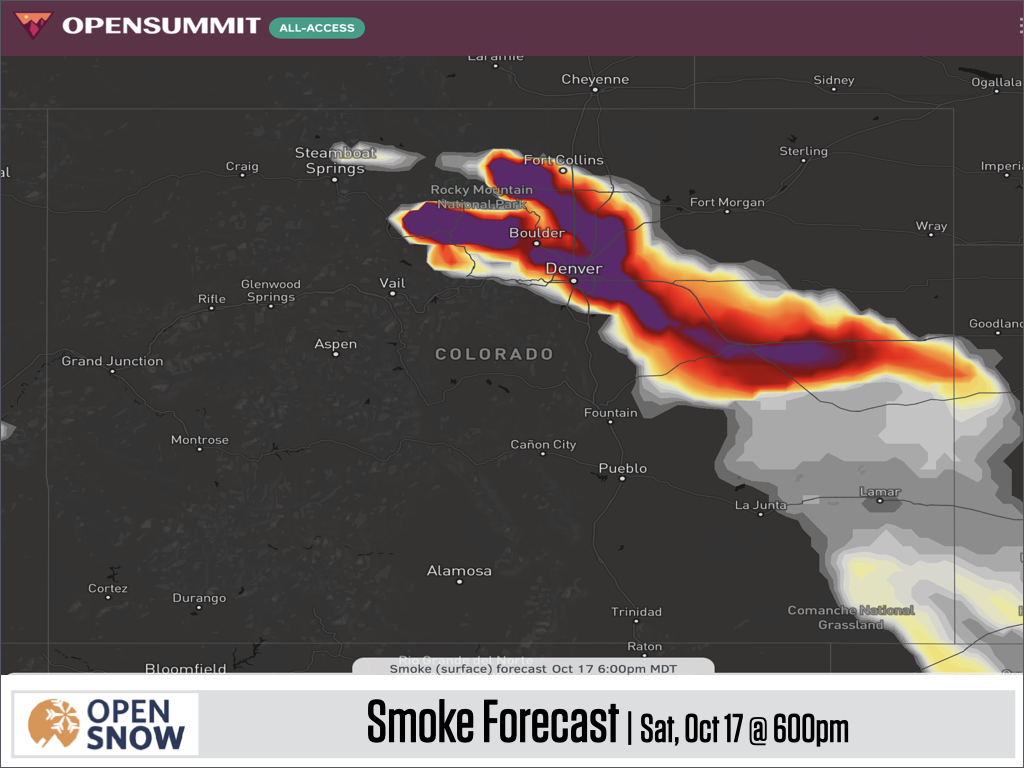 I wish that we didn't need these smoke maps, but looking at them is now a part of my daily routine and since they update hourly, I often look at them many times per day.

The smoke maps are pretty darn accurate and the underlying data comes from NOAA whose scientists deserve the credit for creating such an amazing product. Another great resource for seeing air quality is PurpleAir.com which shows maps of real-time air quality data collected from sensors around the world.

One piece of good news is that a cold front on Saturday night will bring a wind from the east on Sunday and temperatures that will be 10-20 degrees cooler than Saturday. These east winds could keep the smoke away from the front range on Sunday and could slow or stop the progression of the Cameron Peak fire which is burning at a lower elevation. But the East Troublesome Fire is farther west and at a higher elevation and there the winds should continue to blow strongly from the west which will keep the fire burning toward the east.

Saturday morning's radar shows that we're close to getting precipitation, but not close enough. The storm track is still to our north and we are missing this system, just like how precipitation from previous and upcoming systems will just miss us to the north.

The next chance for cooler weather and snow will likely arrive late next weekend or early the following week, roughly around Sunday, October 25 – Monday, October 26.

The European model is hinting at a storm though is keeping it farther north and just missing Colorado. 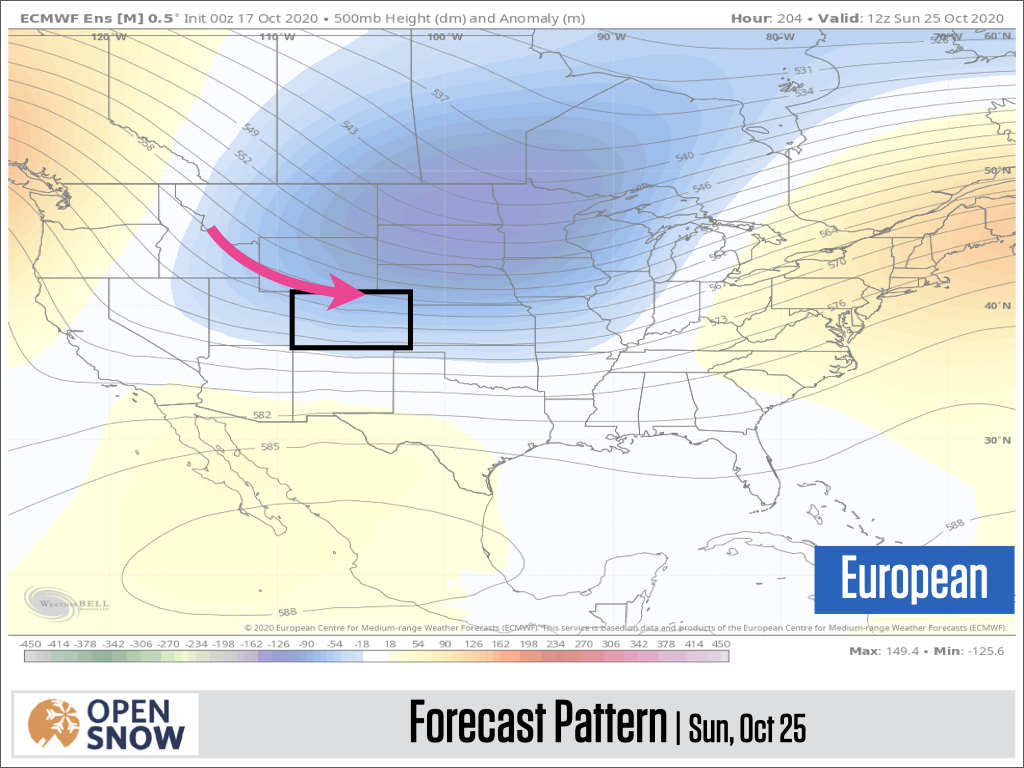 The Canadian model is showing a stronger storm that could hit Colorado more directly. 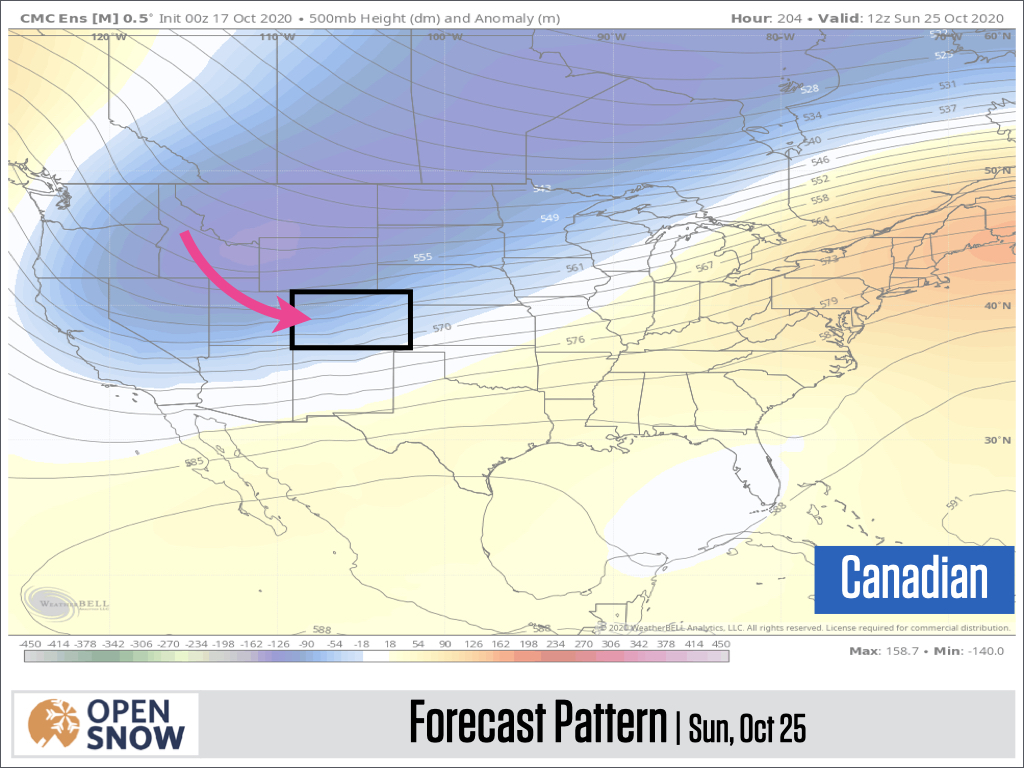 And the American GFS model is showing a stronger storm, like the Canadian model, and it would hit Colorado directly. 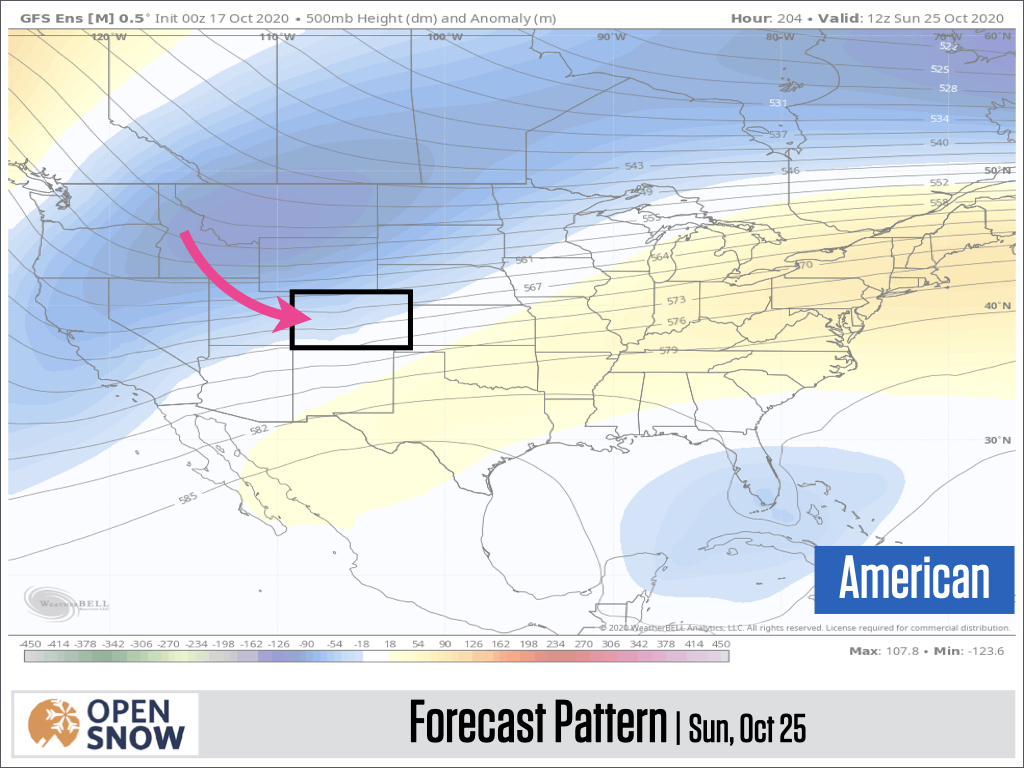 An early look at the precipitation forecast from the American model shows that if this storm track were to come to fruition, a lot of the state would see at least snow. 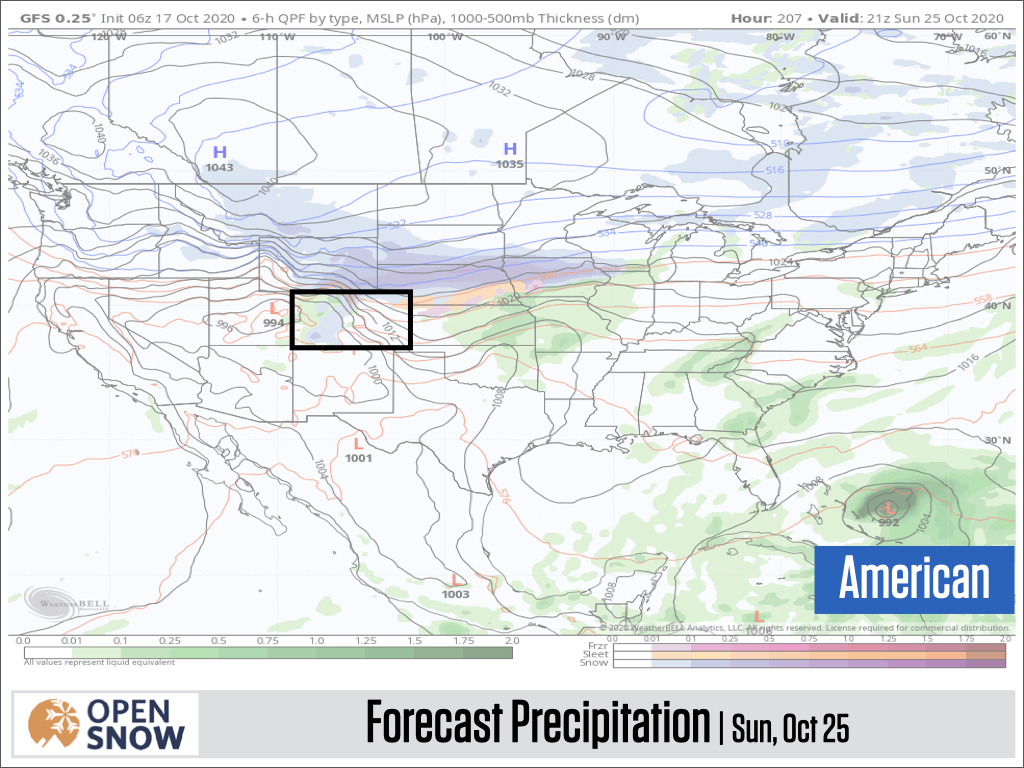 Normally I would not post a 7-8 day snow forecast map, but I did so for two reasons.

First, we need some hope. I am not concerned about hope for the ski season because October snowfall is NOT correlated with snow for the rest of the season. Instead, I am looking for hope that a change in the weather could stop the progression of the fires in the northern mountains.

Second, for the last few storms, the American GFS model correctly forecasted the storms to stay to our north while other models incorrectly brought them farther south, directly into Colorado. This time, it's the GFS that is forecasting a storm dropping south into Colorado, and other models are starting to agree, so it is a reversal of the previous storm forecasts and that piqued my interest.

Of course, we can't trust a single run from a single model, but I like the trend in all the models that I'm seeing and I am crossing my fingers that we'll get lucky and the storm will head into Colorado.