On Saturday, dry conditions, fast wind gusts over 50mph, and some form of ignition created my biggest fear about our current weather regime over the northern mountains – a new, intense, fast-moving wildfire.

There are now six large and active wildfires over the northern mountains, with the latest addition being the Calwoods Fire just northwest of Boulder. This fire burned over 7,000 acres in about 5 hours, which I've read is a very fast rate of spread.

The good news for at least the Calwoods Fire and the Cameron Peak Fire is that the leading edges of both are at low elevations near the plains, and a cold front moved through the eastern plains on Saturday night which will bring cooler temperatures, higher humidity, and light winds from the east on Sunday. I am hopeful that these favorable conditions will lead to a day of low fire spread. But one day of favorable weather will not extinguish these fires. For that, we need a lot of snow and very cold temperatures.

I am not sure if the next storm will bring a lot of snow, but the odds are now in favor of at least some snow and much colder temperatures beginning on or about Sunday, October 25th. Yes! We need some cold and snowy weather to quell the fires, give us a bit of moisture, and help with resort snowmaking efforts (stopping wildfires is much more important than making snow, but the next storm could help all of the above).

Below is the percent chance for 1+ inches of snow falling on Sunday, Monday, and Tuesday (October 25-27). 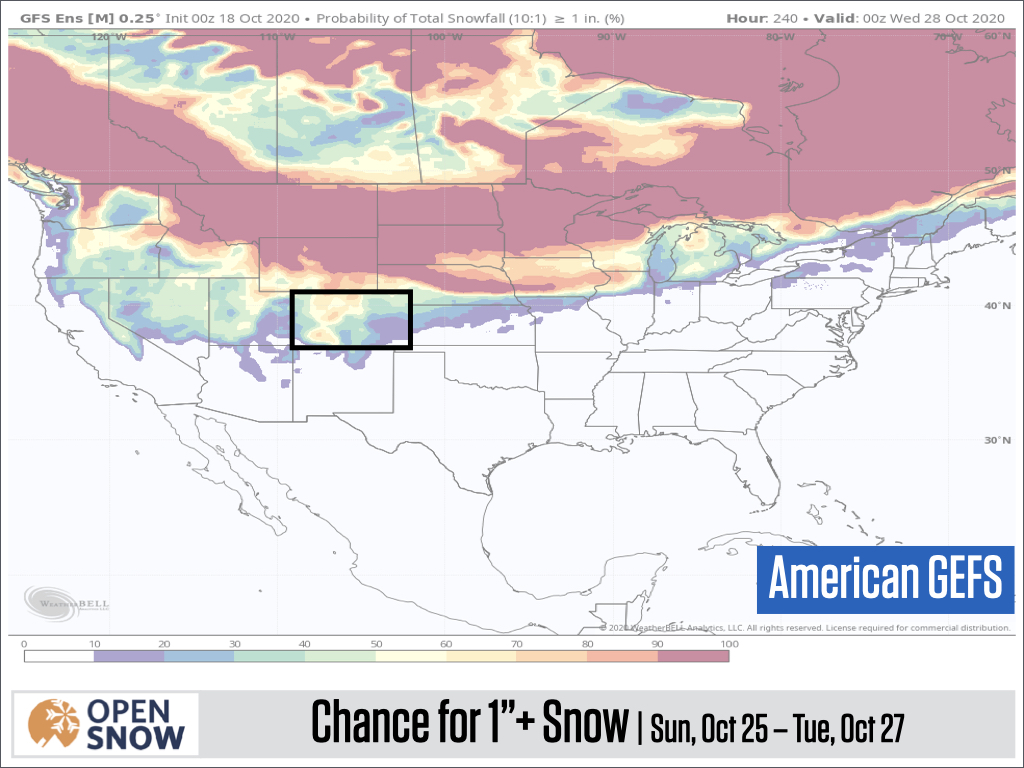 Odds for snow are in the 60-80% range, which is pretty darn good for a storm that's seven days away. I also checked the odds from the European and Canadian ensemble models, and both agree with the American GEFS model, which is pictured above. When all three major ensemble models agree, that leads to pretty high confidence in the seven-day forecast.

Here is the latest forecast from the American GFS model showing snow moving in around Sunday, October 25th.

It's far too early to know if the potential storm on the 25th will bring a little snow or a lot of snow, and we'll figure that out over the coming days.

For now, I am thankful that today (Sunday's) weather will work against wildfire spread on the front range, I am nervous for additional wildfire growth of fires west of the divide and for all fires during the coming week when the weather will be a little warmer and windier, and I am hopeful that cooler weather and snow late next weekend will pack a punch and begin the process of really knocking down these fires and maybe leading to a resort opening or two close to the end of the month.

Thanks so much for reading!